This warrior is remarkably fast and strong. With surprise and generous Hero Points  spending, he proved able to put a young Ben Turner and Lady Shiva off-balance for a little while. He styles himself after a medieval samurai, and is mainly a swordsman.

He seems to have excellent training in both acrobatics and rope work. He also excels in blocking and even slapping back thrown weapons, such as shuriken, toward the thrower.

The Sinister Samurai is actually a mystical solid light duplicate of an intelligence agent named Telegram Sam. Sam was a G.O.O.D. contact in China, until he was kidnapped by Madame Sun. Another intelligence agent with his own agenda, Blodwyn, replaced him.

Madame Sun used both technology and mysticism to create duplicates based on Telegram Sam. One key tool in her work was a Chinese artefact, the Tiger Tally. Apparently, Sam possessed considerable skill in the Japanese martial traditions, and was a powerful warrior.

Sun learned that Richard Dragon and his friends would sooner or later be sent by G.O.O.D. to find the Tally. Thus, she sent a hologram of Sam to kill them. The construct rappelled through the window and invaded Dragon’s hospital room. He was defeated and defenestrated by Dragon, but dissipated into light before hitting the pavement.

The Sinister Samurai later located Dragon and his local contact, a young woman named Sun Ling Po. Po was Madame Sun’s sister, and she and Dragon were infiltrating an ancient Chinese structure in northern China. Their goal was to recover the Tiger Tally. Lunging from the shadows, the samurai killed Sun Ling as she took the Tally from its dais, so Dragon wouldn’t have it.

Furious over the death of the young woman, with whom he was flirting, Dragon coldly defeated and killed the sinister samurai. Through feedback, this also killed Telegram Sam.

The Tally-created hologram is fully solid. In fact it seems indistinguishable from a real human being, to any of the senses.

This efficient, savage killer was entirely silent. Except when punctuating his attacks with a kiai. 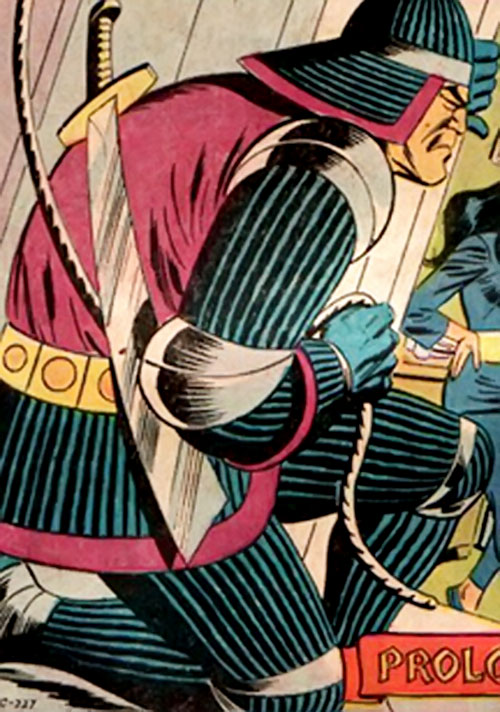