Buddy is as good with his sword as he is with his guitar. As such, he can easily, single-handedly by either sword or his hands alone defeat hordes of enemies. And he can play the greatest guitar solo you’ve ever heard.

This works particularly well since everybody has ran out of bullets for their firearms many years ago already.

Being a classic unstoppable action hero, he is extremely quick and agile. Buddy is already a legendary fighter of unmatched prowess. In fact, he is fast enough to deflect or even catch projectiles, and tough as nails as he will bounce back into action many times again from defeat.

Like many of the more archetypal characters in the film — particularly Death — Buddy might be a sort of spirit or living symbol rather than a human person. If so, he’s presumably the very Spirit of Rock ’n’ Roll.

In 1957, the bomb dropped, and the Russians took over what was America. The last bastion of freedom became a place called Lost Vegas and Elvis was crowned King. After 40 rockin’ years, the King is dead.

Every guitar picking, sword swinging opportunist, including Death himself, hears the call echoing across the wastelands. Vegas needs a new King. So out of the deserts come musicians of many genres to hold a gig in Lost Vegas. Being the victor will land them the job of king of the last, free bastion of humanity. To be the king of rock .

That’ll be the day

One of the musicians is Buddy. He is reluctantly joined by a mute kid that starts talking more and more over time. After a long and perilous journey through the wastelands — which include magical elements such as a brief visit to Hell — they reached the outskirts of the great city.

This is when Death and his men finally caught up with them. Death had managed to kill off every other competitor out there, and now it was Buddy’s turn.

The duel started with the both of them playing guitar solos. It ended when it was clear that Buddy was the greater artist. Death’s men then shot down Buddy, who was concerned with protecting the kid, with their arrows. A fatally wounded Buddy then had a final swordfight with Death, and was too weak to win that one. 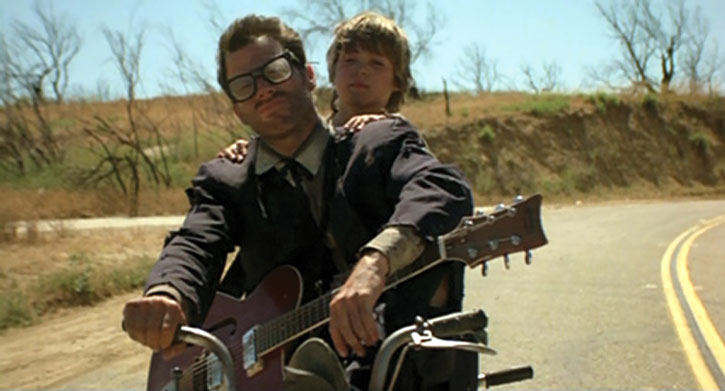 As Buddy laid dying, the kid spit on Death in anger, which surprisingly had a corrosive effect. And so he went on to spray water on him, which actually killed Death. Supposedly the water was holy in the hands of the innocent kid.

Death’s men were impressed. They gave the kid their card for any future gig. Meanwhile Buddy had disappeared, leaving only his clothes, guitar, sword and arrows behind. The kid put on the clothes and headed towards Lost Vegas, in a manner becoming the new Buddy Holly .

Buddy is a fit man with black hair and his trademark horn-rimmed glasses. He wears a fine, but dirty, black tuxedo with a white dress shirt. 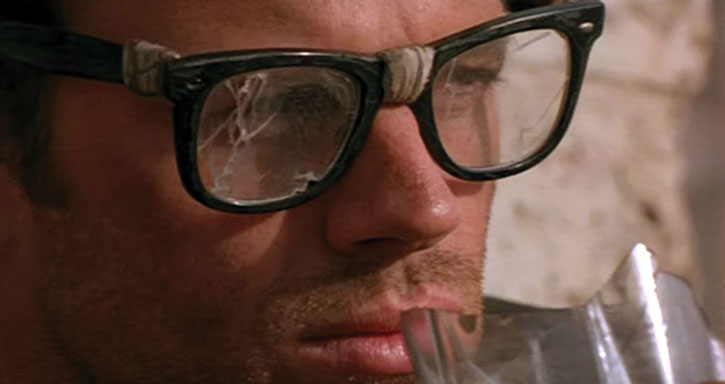 On his back can be found at all times his rare and expensive guitar and his exquisite katana. He often walks around protected by his blue umbrella.

His demeanor is cool and distanced. Opponents regularly underestimate him, particularly since he’s in the habit of often correcting his glasses. Perhaps Buddy’s soft voice and his relatively elegant clothes also play a role… just until he cuts them down.

The trailer, albeit in meagre 480p.

Buddy is smooth, soft-mannered, disciplined and strong-willed. He is perfectly confident in his own abilities, both as a combatant and as a musician. Thus, he cares little for what road scum think of him. Apparently, the next, natural step in his career is to become king. In fact, in his own mind he’s already the new king.

While a loner he’s also a true showman at heart. He will comment on other’s clothes or vehicles if they strike his fancy.

Buddy regularly practices katas while resting and plays the guitar at the most inopportune, but cool, times. 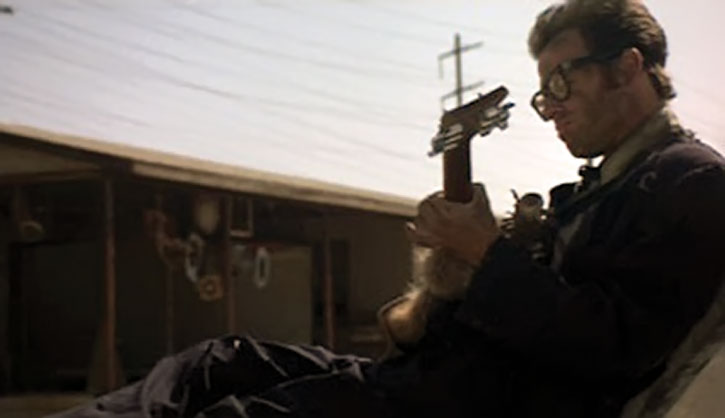 He rewards the rare kindness with politeness, and insults, threats or attacks with killing blows. It’s not that Buddy likes to fight, but there are all too often no alternative. And he’s very, very good at it. Buddy seems unable to completely ignore the downtrodden or those asking for his help, and is somewhat compelled to help them, at least for a while.

That is how the Kid, an orphan, ended up under his permanent protection, after several failed attempts to ditch him. Although that was partly because the Kid also showed to be an unexpectedly valuable, skilled and resourceful ally. In fact, the closer to Vegas he gets, the more compassionate he becomes.

Compassion was shown to be his one and fatal flaw. His desire to protect the kid eventually grew so distracting that he sometimes lost combat focus. He’s clearly at his best when alone.

The mystical elements in the story, including Buddy’s disappearance in the end, hint at the would-be Kings being archetypes of different sorts. At the very least they all represent different genres of music. The kid, however, symbolized post-apocalyptic innocence. In a way, he’s the last hope of mankind, and grew a lot through the guidance of Buddy.

Buddy’s force of personality was so strong in the end that it went on to live in Vegas. Unless he managed to pull of one more miraculous resurrection to fight (and play) another day.

“What ? Float away little butterfly, just flutter away. I’ve got a gig in Vegas. And the wastelands ain’t no place for kids.” 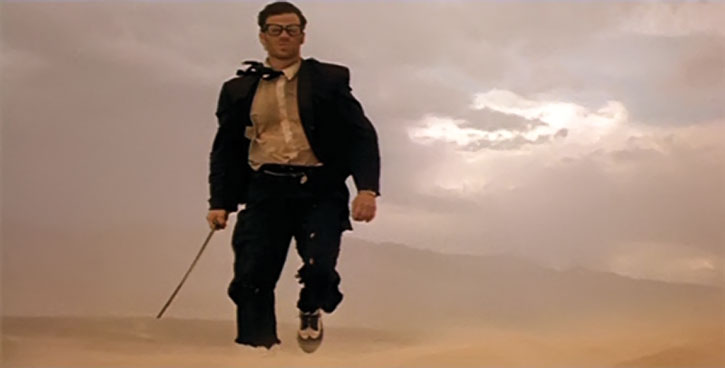 “Cross that line kid, and I’ll cut your little teddy-bear in half. Last kid that crossed that line, I had to summon up the spinach monster with my Rock-n-roll magic.” (gesticulates) “Spinach monster grabbed him, put him underground and made him eat spinach all day. Rumor has it, kid, he’s still there.”

Richie Valens: “Hey, four-eyes ! They say you can kill two hundred men and play a mean six-string at the same time. Hahh, is that really true ? Hey, I’m talking to you, old man ! Hey, what’s the matter, you scared ?”
Buddy Holly (after promptly beating Valens into humiliation) “You don’t want to be like me, kid. Go home. Start a family. Get a picket fence. And get a real guitar.”

Buddy Holly (Desperation Recovery Check, reajusts glasses] “Who are you ?”
Death: “Death.”
Buddy: “Cool. You here for me ?”
Death: “You and every other rock‘n’roller out to claim my throne. Give me the guitar and I’ll let the child go.”
Buddy: “I hope you guys can play.” (beats up Death’s gang with the guitar)

Buddy’s story takes place in a remote post-apocalyptic area in the world of Kamandi, Hex, the Atomic Knights, Hercules or similar.

Or why not in a Fallout-inspired setting. As a nod to Buddy, there is, in fact, a trophy in Fallout New Vegas in his honor for inflicted melee weapon damage.

If Buddy inexplicably decides to play a mean guitar riff at a strange (but cool) moment, give the Player a Standard Award. These might come in handy during one of the many Desperate Recovery Checks that Buddy regularly pulls off. 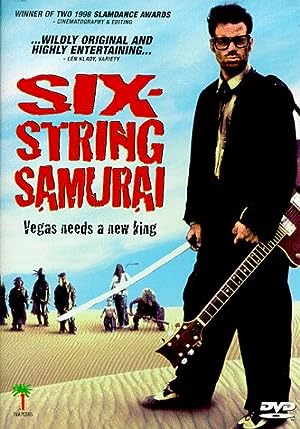 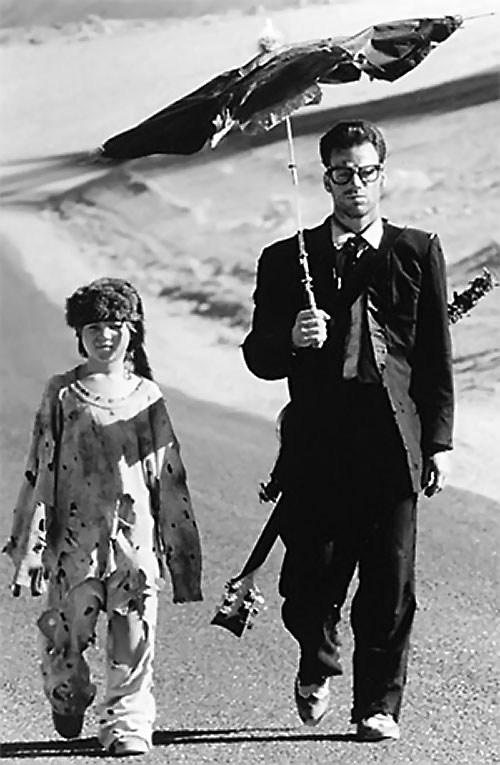 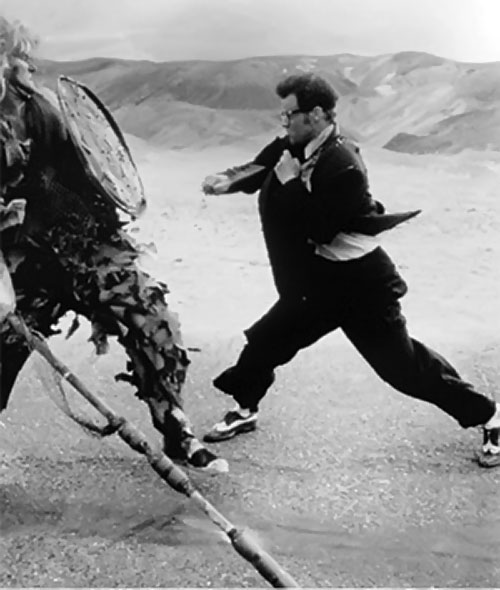 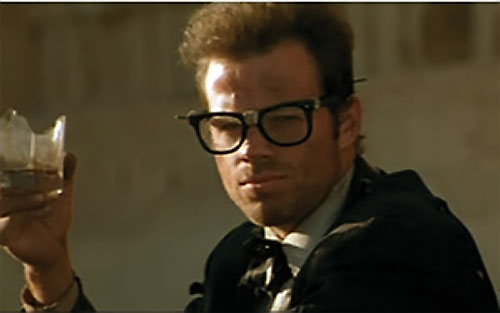 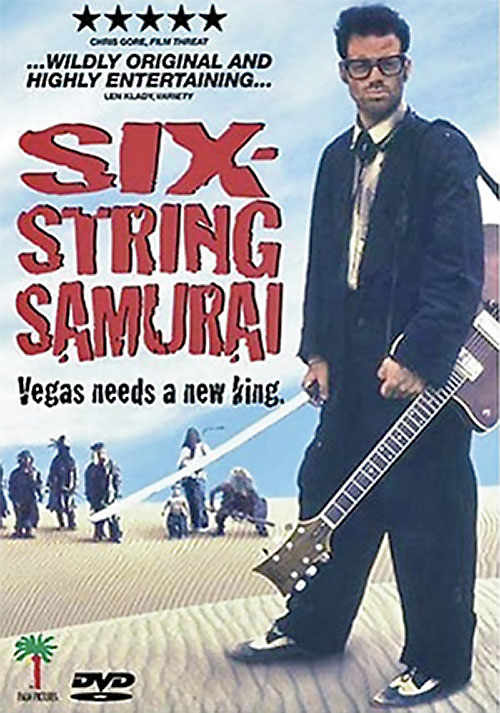