Skateman is an expert skater and martial artist. He combines these talents to become a formidable wheeled hand to hand combatant.

Aiding him in his costumed guise is his natural inventiveness, enabling him to create a Utility Belt of sundry weapons, and homing devices. As well as his sidekick Paco’s motorized skateboard.

A former roller derby athlete known as “Billy the Kid,” Moon quits when he accidentally knocks down and kills his best friend during a match. Moving from the East Coast to southern California with his reporter-girlfriend Angel, he is unable to find work.

However, he isn’t lacking for something to do. When the fearless journalist is murdered by drug dealing bikers, Billy — inspired by a stack of comics — hones martial arts skills he learned in Việt Nam, couples them with his skating abilities, and becomes Skateman.

His sidekick in busting street crime is a young boy named Paco, a champion skateboarder who rides a motorized skateboard built by Billy.

Down-and-out Billy has some of the worst luck seen. Yet he still tries to make the best of his situation.

He actually tries to be grim and gritty regardless of his modus operandi.

His lifestyle is nearly as seedy as the felons he pursued as he lived in squalor.

“We’re forming a union, jerkhole – my foot and your face !”

Skateman wouldn’t mix much with the “capes and spandex” types in the DCU. I definitely see him meeting up with such characters as the Butcher or the Question though. 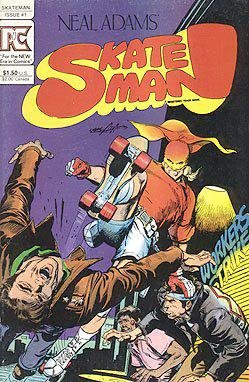