Skeletor is an evil sorcerer and the main antagonist on He-man and the Masters of the Universe, a popular 1983/1984 Filmation animated series. The 1985 spin off series, She-Ra Princess of Power, occasionally featured Skeletor and a few others from the original series.

For context, we suggest that you first read our primer to the Masters of the Universe cartoon setting.

The Skeletor profile also has a companion article – our guide to Snake Mountain, Skeletor’s ominous base.

Skeletor is the greatest villain on the planet Eternia. An evil sorcerer, he’s able to do incredible, impossible things with magic. He amazes even himself.

Though skilled with various weapons, Skeletor’s weapon of choice is the Havok Staff. This is a mystic staff topped with a ram’s skull.

Skeletor is a proficient inventor with great knowledge of engineering and the sciences. He has invented many destructive machines.

He’s inspiring and powerful, yet his megalomania often gets in the way. Even though he has many abilities, he rarely puts them to the best use. The main exception is his planning, which can be quite good. His go to attack is a straight forward energy blast.

Though evil and menacing, Skeletor does not usually seek to kill his opponents. He’s quite skilled at disarming. He loves to take prisoners and use them as leverage against more powerful foes.

Warriors come from all over with hopes of gaining power or riches by serving him. Some of the most powerful warriors on Eternia work for him. Such as Beast-Man, Evil-Lyn, and Clawful.

An exact timeline is difficult to ascertain.

Skeletor, a demon from another dimension , entered Eternia long ago.

Skeletor once tricked Zanthor, the guardian of the disks of knowledge, into giving him said disks. Skeletor promised power, but instead banished him to the Phantom dimension. With these disks Skeletor learned much. That including methods to build a secret base shaped like a coiled snake – Snake Mountain.

Skeletor worked alongside the villain Monteeg for many years.

Skeletor and the Horde

Skeletor became a pupil of the galactic conqueror, Hordak. The Horde invaded Eternia. Though unsuccessful, Hordak kidnapped, the infant princess, Adora. Skeletor was captured before he could escape. Abandoned, Skeletor had no issue giving up the whereabouts of his master.

Cut off on Eternia, Skeletor took control of Snake Mountain and gathered evil warriors to his cause. 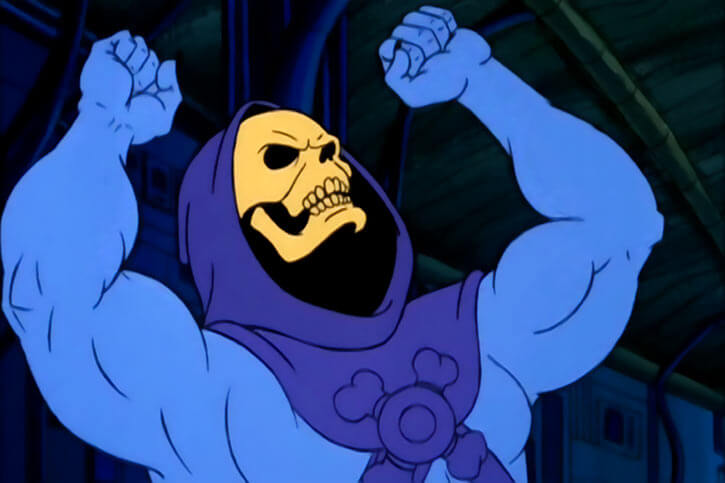 Skeletor’s power grew. But he was constantly in conflict with the forces of good. King Randor and his kingdom were an ever-present roadblock to his growth.

Seemingly, out of the blue, came a special hero named He-man. Skeletor and his warriors came to see He-man as the greatest threat. Skeletor believes if he can remove He-man he will rule Eternia. Then the universe!

Skeletor’s head is a yellow skull under a hood. His well-muscled body is blue. He wears a purple harness and leather boots.

Skeletor is arrogant about his own intelligence and power. So, he is constantly infuriated by the utter ineptness of his warriors, and has little patience for them. He prefers the company of Evil Lyn and Beast-man.

Skeletor hates He-man and will always choose to try to destroy him. He cannot understand why anyone would want to be good. He’s also the type to never take blame for defeat and failures.

Curse your sudden but inevitable betrayal

Skeletor will double cross anyone, sometimes even to his own detriment. He enjoys breaking promises, and therefore makes them often. He makes trades but, in the end, will always renege. 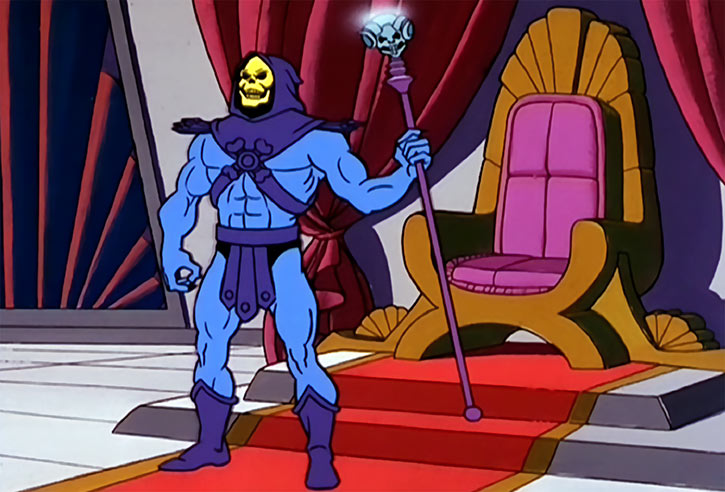 He’s taken both Castle Grayskull and the Royal Palace several times but has never held them long. He knows that inside Grayskull his magic is increased, and believes the power of Grayskull would make him ruler of the universe.

After his betrayal by Hordak, Skeletor has only hate for him. He is more determined now to conquer the universe for himself. I’ve wondered what Hordak taught Skeletor as his pupil. Hordak hates magic and Skeletor was already a technological master. So, I can only guess he taught him how to be more evil.

Successful as a master manipulator. Here is how he works his own warriors:

Skeletor’s main purpose in his mind is to conquer and control the entire universe. However, this has proved difficult with his ever-constant opposite, He-man, in his way. Skeletor would do almost anything to destroy him.

Beastman and Trapjaw: “Help us Skeletor, help us !”
Skeletor: “No ! I’m only interested in saving myself.” (Teleports away) 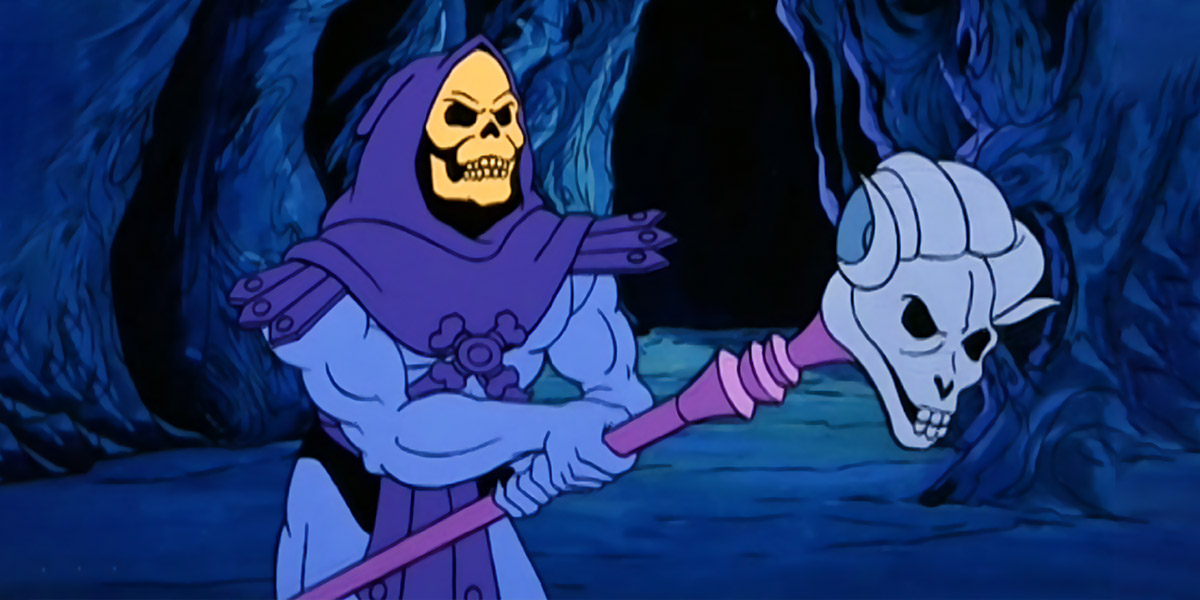 (To Beast-Man after some failure)
“You furry, flea-bitten, fool ! I’ll cover my throne with your hide !”

Skeletor: “Welcome to Snake Mountain. I’m pleased to have you as my guest.”
Zagraz: “Oh, don’t give me that. My comets will go wild without me. You’re causing a great deal of trouble.”
Skeletor: “Don’t I always. I want you to use your comets to help me defeat He-man and break into Castle Grayskull !”
Zagraz: “Never ! Oh, you must let me go for goodness sake.”
Skeletor: “I never, ever do anything for ‘goodness sake’. Hehehe, everything I do is for the sake of evil.”
Zagraz: “But there’s some good in everybody.”
Skeletor: “Not in this body. Hehehehe. When are you goody-goody fools ever going to understand. I am completely and utterly evil ! I live to be bad. I care for no one and no one cares for me.”

“Promises come in handy; only when you can find a fool to believe them.”

“This is turning out to be a wonderful day for evil.”

Skeletor could be a real force for evil in any universe.

I would like to see a cross-over story where Skeletor summons General Zod, Ursa, and Non from the Phantom Zone. He tries to control them. Whether he does or not, these three would be quite a challenge for all of Eternia. He-man may not be able to defeat them physically, but he’s faced many enemies who are more powerful and came out on top.

The story could culminate in a team-up with Skeletor.

Advantages:
Area Knowledge (All the lands around Snake Mountain and The Royal Palace including Castle Grayskull), Expansive Headquarters (Snake Mountain), Familiarity (Space Travel), Expertise (Eternia’s myths and legends), Leadership, Slowed Aging, Schtick (Contingency Plan – he always has a trapdoor to drop the heroes into; or a creature just on the other side of the wall, for instance)).

Rituals:
Skeletor uses many rituals, most are quite powerful. He uses them to gain power, an artifact, or an ally to defeat He-man. He often calls on Evil-Lyn, Beast-Man, and Mer-man to assist in his spell-casting.

Sometimes the Havok Staff acts as the activator of something inside Snake Mountain. The eyes of the ram skull glow and a trap will activate. While disarming Skeletor will cause the eyes to stop glowing and the trap will cease to function as well.

[BODY 05, Enhance (EV): 02 (cap is 06), Descriptor: Slashing, piercing].
At the start of The Dragon’s gift Skeletor no longer has his own version of He-man’s power sword. This new sword has crossed bones as its crossguard, and becomes Skeletor’s blade for the rest of the series. 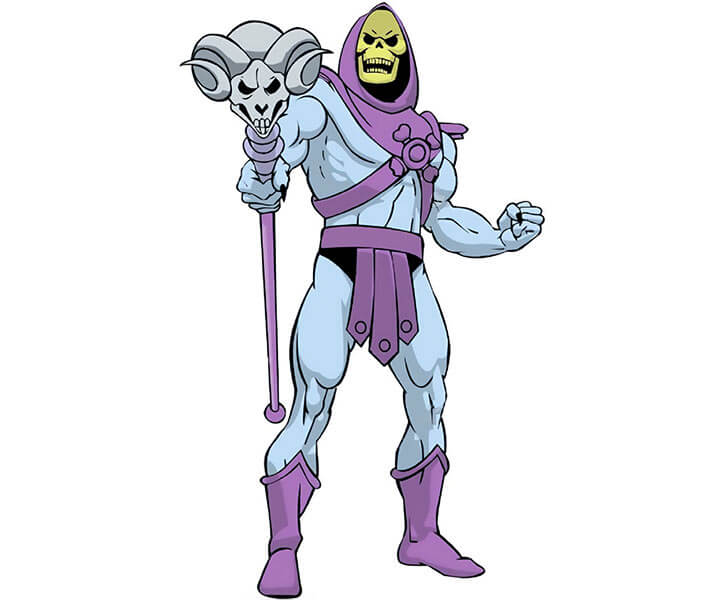 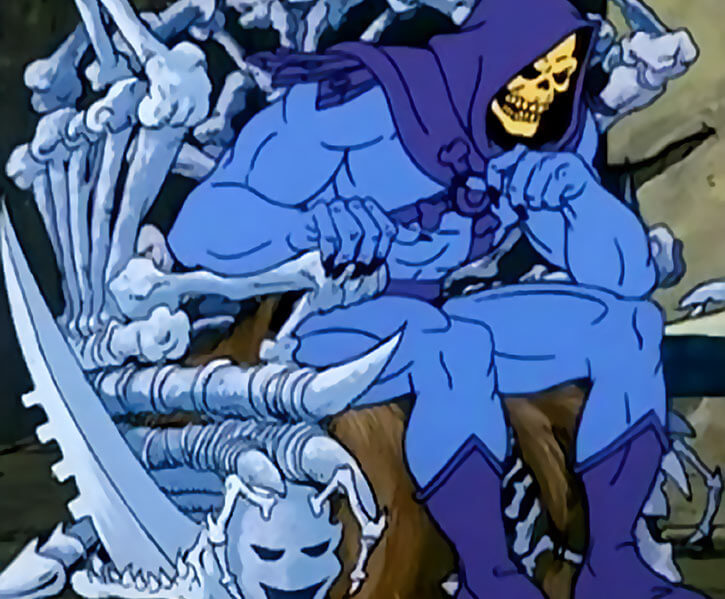 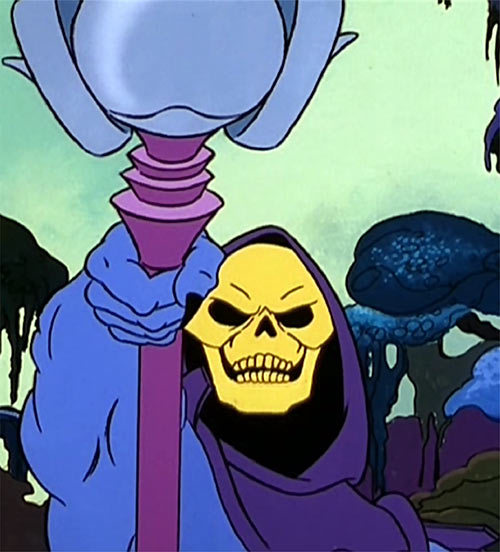