Skin Dance has the ability to grant powers to others, provided he can make flesh to flesh contact with them. This also allows him complete control over them. He usually does this to couples, whom he then sends on killing sprees until they die.

He uses face paints on his puppets, giving them a white face with coloured patterns.

Skin Dance has roamed the world for decades. He left enough time and distance between his crimes that few have ever linked them.

His M.O. is to select a couple with children, and no history of criminal or psychopathic activity. Then he gives them super-powers, and sends them on a violent rampage, ending in their deaths. The children, while assumed killed, are never found. They are in fact taken by Skin Dance for his employer.

During one of his excursions he came into conflict with FBI agent Molly Savoy. But she managed to escape his control. Years later, when she was Sheriff of Crossroads, he decided to hunt her down and finally take control of her.

Leaving a trail of his puppets leading to Crossroads drew Savoy’s old partner Bobby Barrymoore into investigating. Skin Dance transformed Barrymoore’s assistant Laura Tucci, and Sheriff Mulholand, of the neighbouring county, into his puppets and sent them after Savoy.

This brought him into contact with Sovereign Seven, who had taken up residence in Crossroads, and set themselves up as its guardians. Skin Dance believed he had taken control of Rampart and Indigo, and used them to fight the other Sovereigns and Sheriff Savoy. But, in actuality, Rampart had erected skin-tight fields around them, preventing Skin Dance’s power.

He was turned over to FBI custody, and presumably went to jail.

Skin Dance enjoys exercising control over his victims, especially watching them kill friends. While he enjoys the killing, he enjoys his freedom more, and will rarely risk getting caught, happy to allow his puppets to get the spotlight.

“I am Skin Dance. Think of me as a gatherer of lost souls.”

“I think I’ll have you lay waste to the whole town, so that you’ll be blamed for all these recent depredations, and I’ll be wholly, conveniently forgotten.”

“You had glory in your grasp, Molly dolly. In you I saw not prey but a kindred spirit. We could have made such beautiful music together.”

Bonuses and Limitations:
Bestow has a Range of Touch (-1), has the No RAPs Limit Bonus (+5), and may only be used on victims of his Control power (-1).

Laura Tucci was a young FBI agent who resented the way her superior treated her. Skin Dance turned her into one of his puppets, increasing her strength, and giving her the ability to “persuade” those around her.

The controlled Tucci is the woman in the last illustration.

Bonuses and Limitations:
Hypnosis does not work if the target is in pain (-1). 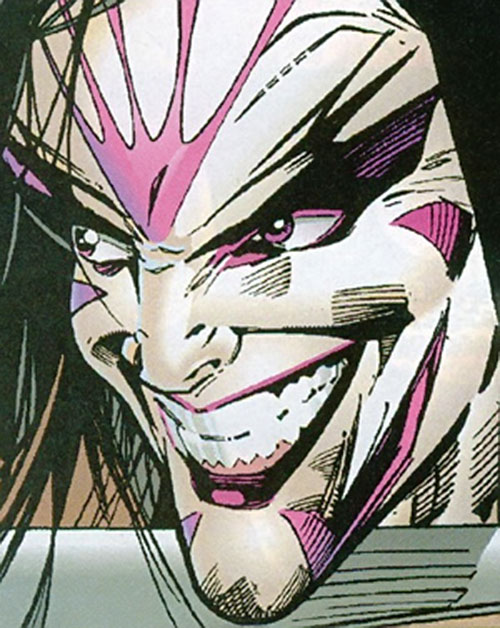