Skin was a X-Men-related character who appeared in 1994. He was seen a fair bit during the second half of the 1990s.

This here writeup is a mini-profile done in 2008. It didn’t make the publication cut. But since Verizon decided to destroy the Yahoo! Groups archives, it’s either process it (with edits) or lose it forever.

I think some of the material may be from mutanthigh.com. But as of 2019 the site seems gone.

There’s a chance this will be replaced by a more comprehensive profile, since our Jubilee series has reached the Generation X era.

Angelo has six feet of extra skin on his body. This gives him limited stretching abilities.

This power is somewhat hard to control however. Sometimes Angelo has a hard time even keeping his face on straight.

Before joining Gen X, Angelo was a member of an L.A. street gang.

After his mutant powers manifested he faked his death in order to leave for Gen X with a clean slate.

At first Angelo was a bit reluctant to join. But after a pep talk from Beast, he enrolled.

A while after joining Gen X, Skin was tracked down by X-Cutioner. This vigilante intended to kill Skin for the murder of Angelo Espinosa. After finding out that Angelo was Skin, he presumably left the teenage mutant alone.

After Generation X disbanded, Skin moved back to L.A.. He was eventually murdered by the Church of Humanity.

Angelo is a proud young man who is somewhat sensitive about his new appearance, he is somewhat joking and friendly towards others.

“Like the man said Jubecita, ‘anything worth doing is worth overdoing.’ Anyone can wear a tux… it takes a vato with brass ones to wear this.”

Since mutants are kind of rare in DC, Angelo could be the result of a chemical spill during the aforementioned gunfight.

He might make an interesting member of Teen titans.

Bonuses and Limitations:
Stretching is only usable on his skin.

Writeup completed on the 9th of September, 2002. 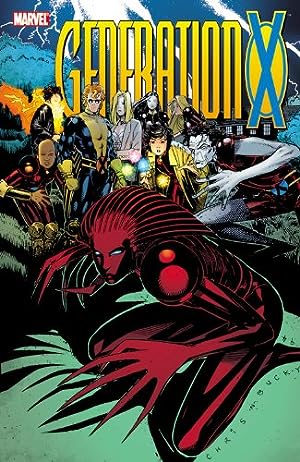