Skinner is superhumanly strong and swift.

His true form is that of a skeletal monstrosity. His every bone sports some sort of razor-sharp spike, hook or blade. These — and particularly the cleaver-like protrusions on his forearms — can slash through steel.

In his skeletal state he appears to be indestructible, rising again after he’s been smashed to pieces. Skinner is confident that he cannot be hurt too badly. He is thus willing to take on opponents even more powerful than himself in the hope of getting lucky.

Skinner can disguise himself by taking flesh from his human victims. He then puts it on his bones. The process was once depicted as mystically disintegrating the flesh of his kills to build up his own. But the rest of the time it was implied to be a ritual implying butchery.

Depictions of how much flesh Skinner needs to build himself a body range from months of hunting (implying dozens of victims) to about a half-dozen victims. Our No-Prize Hypothesis  is that flesh built from the corpses of few victims is of lesser quality and will not withstand the stress of years. Whereas carefully selected bits from many victims will work much better and last much longer.

This mystical process results in a fully functional body with working human organs. This flesh can be destroyed like human flesh normally is, reverting Skinner to being a skeletal creature.

Skinner seems to have some sort of tracking sense. It allows him to unerringly catch his preys. Based on dialogue, our game stats assume conventional tracking skills, a super-developed sense of smell and manhunting experience applicable to the modern world.

Skinner’s Lilin nature is unusual. Attacking him with the Rider’s Penance Stare is as painful for the Rider as for Skinner. It is possible that other mystical attacks will run into the same sort of defence. But an alternate explanation is that this was caused by Skinner being his own victim, being crushed by guilt over what he did to his son and his wife.

Skinner’s an excellent driver. He may have worked in transportation at some point, as he seemed to have trucker skills.

Skinner is a Lilin – a long-lived son of the demonic quasi-goddess Lilith. A born hunter and slayer, Skinner was feared by all. He enjoyed stalking and killing anyone – human, mutant or even Lilin. He was reputed as being the fiercest of his kind. But at some point grew weary of the hunt and blood. He decided to live quietly among humans.

The chronology is undocumented. Lilith is thought to have been banished from Earth some time before the Great Cataclysm that sank Atlantis and other land masses 20,000 years ago. But this is just an hypothesis. Skinner is thus almost certainly thousands of years old. He thus walked the Earth during the Hyborian Age – and possibly millennia before that.

Skinner himself did state that he “walked the Earth for millennia”.

His father is unknown and perhaps unknowable. Lilith enjoyed a endless list of lovers that included numerous gods, demons, mortals and others.

By 1992, Skinner was living in the US under a pseudonym (possibly “John Skinner”). He had a wife and an infant son.

However that year also saw the return of Lilith. She had been imprisoned in the belly of the mythical Leviathan for millennia. She called her descendants — collectively called the Lilin — to her to build her army. But she had been gone for too long and only a few could hear her.

However Pilgrim, one of the Lilin, had kept track of every kin he could. Unlike most, he had retained his faith that the Mother of Demons would return one day. He heard Lilith’s call and helped round the scattered Lilin up. After a few weeks, Lilith told him (and fellow Lilin Blackout) to recruit the formidable Skinner.

Skinner rejected his relatives and wished to be left alone. However Lilith then came in, and Skinner mystically recognised her and obeyed her. 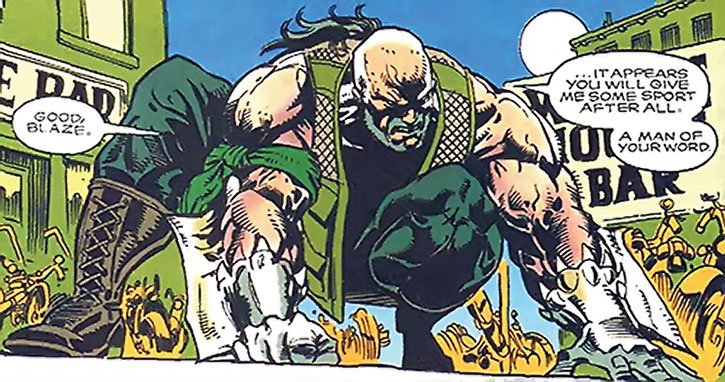 She bade him to join her and destroy her enemies. Skinner chose to kill his beloved wife and son. That was presumably in recognition that, given Lilith’s ways, they would likely be used against him and suffer horrible torture at some point. In particular, he wanted to spare his son the life of a half-Lilin like Blackout now that his grandmother had returned.

Lilith sent Skinner to kill Johnny Blaze. He almost succeeded despite Blaze’s Hellfire-projecting shotgun. But the Ghost Rider (Daniel Ketch) intervened in the nick of time, and the two destroyed Skinner.

Minutes later, Skinner’s bones had knitted themselves back together and he rose again, but Blaze and Ketch were gone.

Skinner spent months hunting and killing enough humans to rebuild his flesh. He then attacked Ghost Rider and Blaze anew. Skinner disembowelled Blaze with a forearm swipe, forcing a medical and mystical intervention that turned Blaze into a sort of cyborg. Skinner was then battered by the Ghost Rider, and had to retreat with Centurious and Lilith.

During the war between the Midnight Sons and Lilith and Zarathos, Skinner was among the small army of Lilin serving Lilith but did not play a significant role. Using the Medallion of Power, the surviving Midnight Sons banished Lilith and her children to the Shadow Side dimension. Skinner was assumed to have been banished along with the rest, but apparently it wasn’t the case.

Ghost Rider action figures in the 1990s included mini-comics called Ghost Rider Special Edition. Skinner appears in #5. These story are not thought to be in continuity. And they don’t appear to form one on their own, based on the two I could read.

This story features Skinner having many children. These are half-Lilin whose power is latent and who appear to be normal people, but have some mystical potential. This suggests that Skinner made a number of tries to live like a human and start families, only to crack and kill the woman he was with before trying again.

In the story, Skinner is looking to kill some of his children, as their mystical potential can be used to power a ritual.

Down in a hole

In 1994 or 1995, Skinner was captured by Research and Containment Facility #24601. This was a shady government fortified prison-lab hidden in the Appalachian Mountains. Nicknamed “the Black Hole”, this facility was particularly interested in medical studies of its prisoners.

How much they understood about Skinner is unclear, particularly as to whether they realised he was a supernatural being. They did realise that he was related to a specific race, and wanted to find more of those/ But Skinner refused to speak.

The Lilin was trapped in a contraption that would shock him unconscious whenever he extended a bone from his body. But he kept trying, hoping to find a weak point.

During the summer of 1995, S.H.I.E.L.D. reluctantly handed a captured Ghost Rider over to the Black Hole’s director, universally nicknamed the Spook. The sadistic Spook forced the hand of the Rider’s human host, Daniel Ketch, leaving him no choice but a violent escape. 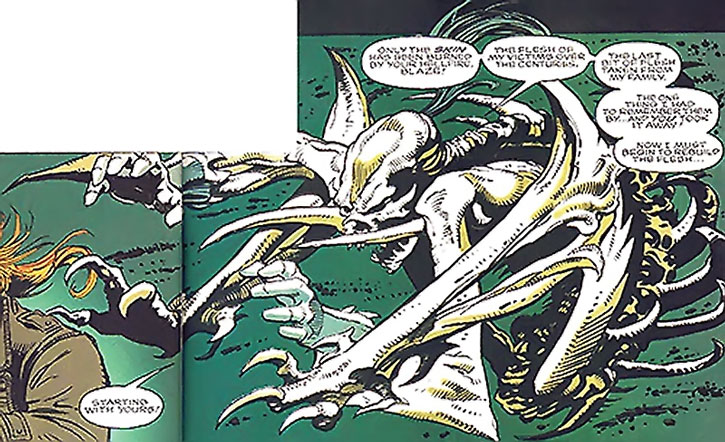 As part of this escape, the power generators of the facility were destroyed by the Rider’s bike. This freed Skinner and several other high-risk prisoners.

Skinner massacred everybody in his way. He realised that the Rider was present, presumably after invading a security post with a video feed. Considering that the Rider and other Midnight Sons were responsible for the death of his family, he attacked but was stunned by the Penance Stare.

The Spook then triggered the nuclear self-destruct sequence of the facility, and Skinner was caught inside.

You could smell it so you left me on my own

Between the thick steel walls and his durability, Skinner survived. But he remained trapped underground for several months.

A hazmat cleanup crew dug a way to him, and he killed them and took their flesh. Skinner killed his way toward New York City, slaughtering cops– in Kentucky to steal their cruiser. This was detected and led to a catastrophic clash with the NYPD. Skinner killed more officers and triggered a major fire in an industrial park near Cypress Hills.

John Blaze and Dan Ketch spotted the conflagration, as Skinner had hoped. Skinner was eventually overwhelmed and the Rider dragged him at high speed on the road and into obstacles for two hours until he surrendered. The broken Skinner was taken to the Vault super-prison, and hasn’t been seen since.

As Skinner grows angry and bloodthirsty, his bone spikes and blades pierce his flesh. They emerge even without his conscious wish. Normally, Skinner only extrude his forearms cleaver to fight, but spikes and pointed ribs will appear if the fight goes on for too long.

Skinner normally keeps his blades and spikes retracted in his bones, even when it’s physically impossible. For instance his forearms cleavers are way larger than his radius and/or ulna.

He prefers to dress in a rural worker manner, with practical clothing fit for long drives, trekking and other outdoors activities.

Skinner wanted to have a nice, ordinary family life in the suburbs. This was all shattered by Lilith’s return.

Just seeing her made him completely loyal, and reawakened his fearsome hunter-killer instincts. Skinner wasn’t pleased by what was happening and the loss of his domestic bliss. But the need to stalk and murder for his mother was suddenly too strong to resist.

Skinner doesn’t want to kill his foes outright. He wants to hunt. He’ll give his target a five-minute head start, forcing compliance by threatening to kill random bystanders if need be. Hostages are a common tactic of his, though he’ll never hesitate to dispose of them if they become a hindrance.

Skinner casually and frequently massacres ordinary humans as they’re too weak to give him the thrill of the hunt.

Skinner’s name presumably comes from the fact that he keeps the skin off his kills as trophies. But one assumes that he actually does that by adding the flesh to his own body rather than keeping skins or scalps around.

Skinner blames Blaze, Ghost Rider and other Midnight Sons for the death of his family. He considers that he wouldn’t have been pressed into service had they not opposed Lilith. He’s aware of how flimsy this reasoning is – he’s savage, not dumb. But ranting about it and throwing accusations make him feel better.

As time went by he became obsessed by this and sunk into denial, refusing to consider that he was obviously displacing blame. Eventually this became untenable. He chose to consider instead that he had to close the mission his mother had reactivated him for – killing the Ghost Rider.

The Lilin is a competent manhunter with a good knowledge of how the world works. He’s not subtle, but he gets results in a brutal action protagonist sort of way.

(Grabbing a hostage) “In the past I’d have slit his throat just to watch him bleed. I’ve mellowed with age, become more tolerant of lesser beings. But you know my mother. She brought me back to this.”

“I want the hunt. The stalking. I want your skin. If you leave within the next five seconds the man will also walk away, unharmed. I’ll give you a five minutes head start.”

“Unholy night creatures — born of sorcery and hellfire — hear me ! You will walk this Earth no more ! You took the only thing dear to me — and now I take you !”

Bonuses and Limitations:
Invulnerability takes a few minutes per roll

Drawbacks:
Strange Appearance (disguisable with extensive efforts), Minor Rage, SIA toward the hunt. Skinner briefly had Dependents, but he took care of that.

Equipment:
Skinner sometimes carries a large knife. Since he obviously doesn’t need a blade, one assumes that it’s a survival/utility knife with useful little gadgets like a screwdriver bit, fire starting supplies and fishing lines.

A more supernatural (and unified) approach to his tracking abilities would have been the Extra-Sensory Tracking Power. 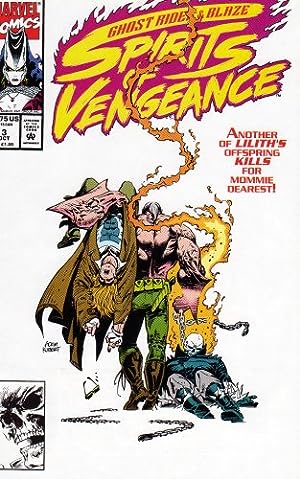 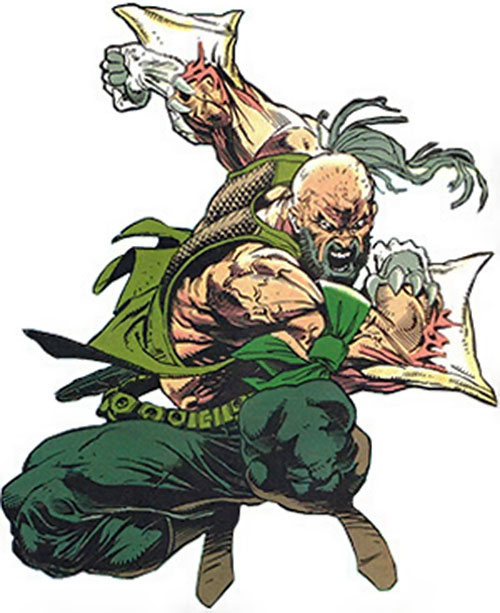 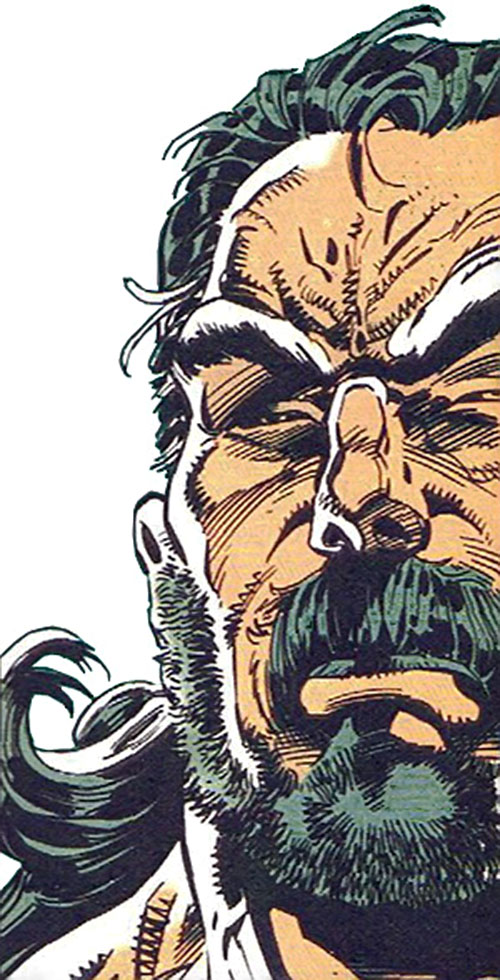