Skrull-X is in possession of his race’s powerful shape changing abilities. But what makes him truly dangerous is that he was genetically re-engineered to possess the combined superhuman powers of the early X-Men.

Unlike the Super-Skrull in the main Marvel Universe timeline, Skrull-X is not augmented by energy broadcasts. He does not need them, since he has the X-Men’s genetic material infused directly into his body. Thus, while he does not enjoy the boosted powers of his counterpart, he also does not have to fear being crippled by interruption of the energy broadcast.

As one of his race’s finest soldiers, Skrull-X also adept in hand-to-hand combat, vehicle usage and military skills. Skrull-X is also adept at handling Skrull and Kree technology to an expert degree. Leading the terrorist group known as the Skrull Liberation Army has given him considerable ability in planning and conducting guerrilla warfare operations.

Being the long-term commander of that covert army has also sharpened his impersonation and leadership abilities beyond that of his counterpart’s skills in those areas. He was once able to pose as Nick Fury, head of SHIELD, for months despite SHIELD’s specific anti-Skrull measures.

This Skrull-X comes from an alternate Marvel Universe timeline. In this timeline, Victor Von Doom accepted Reed Richards’ help with his dimensional transporter, allowing Doom to rescue his mother. Reed was accidentally killed in the process. Doom took up the superheroic identity of Valor in Richards’ memory, wearing a golden version of his mainstream MU counterpart’s armor.

Since Reed Richards was killed in college, the Fantastic Four never formed as such. Still, the Storm family and Ben Grimm would eventually end up working for SHIELD as an alternate version of the Fantastic Four under the leadership of Matt Murdock. In this timeline, it was the early X-Men who encountered and ultimately defeated the first Skrull scouting party.

As a response to that first defeat the Skrulls devised a warrior specifically meant to overcome the troublesome mutant team. Thus, the greatest scientists of the Skrull Empire selected one of their best warriors and introduced the genetic traits of the X-Men into his body, giving him all of their powers in addition to his own natural abilities.

End of the world

This Skrull, Kl’rt, took the name Skrull-X and went to Earth. He vanquished the X-Men in combat and destroyed the Mansion. He then signaled for the main Skrull fleet to move in.

The Skrull-Terran war began in earnest. Despite the Skrulls’ military power, the heroes of Earth kept them at bay. The main efforts against the Skrulls were lead by the Avengers with the rest of Earth’s heroes joining their ranks. This included a great many previously hidden mutants.

The war dragged to a standoff until Peter Parker, the amazing Spider-Man, infiltrated the Skrull mothership. Once on-board, Parker discovered that Galactus was headed towards Earth.

Spider-Man then undertook a desperate scheme that would reshape the galaxy. He seized control of the mothership and detonated it near Galactus’ flight path, close to the Skrull homeworld. The Silver Surfer diverted to investigate the sudden energy surge and discovered the Skrull homeworld, leading his master there for the next meal.

With the destruction of their homeworld, the Skrull Empire was shattered, quickly devolving into civil war. The Skrull fleet around Earth scattered, joining various Skrull warlords and abandoning their ground troops to the resurgent attacks of Earth’s heroes.

In the aftermath, Peter Parker was celebrated posthumously as Earth’s greatest hero. The Avengers had numerous branches established around the world to aid in coordinating future superhuman endeavors.

In honor of the memory of the X-Men and the many mutants who aided the war effort, Xavier Training Schools were established throughout the United States to school future mutants in the best use of their abilities. Because of their wartime efforts, mutants did not suffer nearly as much persecution as they did in the main Marvel Universe timeline.

The Skrull warriors that were left behind went underground, forming the Skrull Liberation Army. Its ultimate goal was to conquer Earth and use it as a base to re-establish the Empire. The SLA is led by Skrull-X. His formidable skills have been sharpened by the challenge of leading a resistance movement in hostile territory.

Revenge of the little green men

One of the SLA’s most ambitious attempts at seizing world power was carried out in conjunction with AIM troops from the mainstream Marvel Universe. AIM helped the Skrulls infiltrate SHIELD – the primary agency tasked with the on-going Skrull menace. They captured many of the divergent Earth’s heroes.

Thwarting this effort took a combined task force of the alternate Avengers and heroes from the main MU including the Fantastic Four, some of the Avengers, and Spider-Man.

Given Spider-Man’s place in destroying the Skrull Empire, the Skrull were particularly frightened by his presence. He was an apparent revenant come to finish vanquishing the Skrulls. The combined force of heroes managed to thwart AIM’s plans on both Earths before returning to their respective home dimensions.

Skrull-X is currently imprisoned in the divergent Earth’s supervillain prison known as the Vault.

Skrull-X looks like an ordinary Skrull warrior. He wears a purple full body suit with dark boots, gloves and a black skintight cowl that extends from his head to his shoulders and abdomen. At the shoulders the cowl extends like sharp spikes in sideways directions.

Skrull-X does have one addition to the standard Skrull uniform. It is a black visor with a green lens that resembles Cyclops’ visor.

The only visible part of his skin is his face, which, like all Skrulls, is colored green, with strange eyes, big pointy green ears and a furrowed chin. While his visor usually covers his eyes and ears, it’s clear that he is an alien.

As a well-trained warrior Skrull-X moves like a true soldier, confident and fast.

Skrull-X believes he is the finest, most powerful warrior of the entire universe. Since the destruction of the Skrull Empire, Skrull-X has devoted himself to leading the Skrull Liberation Army in the hopes of conquering Earth and from there rebuilding the Empire. He has become a very charismatic and inspirational leader among the Earth-bound Skrulls.

Skrull-X was one of the Skrulls that heard Spider-Man’s final broadcasts from the Skrull Mothership as Spider-Man led Galactus to the Skrull. Witnessing that and the subsequent scenes of destruction televised from homeworld traumatized Skrull-X. He is still sensitive on the subject of Peter Parker, the man who stole everything from the Skrulls.

Given the Skrulls warriors’ slightly superstitious bent, Skrull-X and his associates harbor the unspoken suspicion that Spider-Man will eventually return from the dead and finish the job of wiping out the Skrull race.

“Earth for the Skrull Empire !”

Well, Skrulls are really Marvel. Either make him a bad Durlan or even a white Martian with all the JLA’s powers or keep his origin exactly as is but make some DC group his main opponents instead.

A team up with Paibok the Power Skrull would also be nice.

Note:
Usage of any mutant powers gives Skrull-X the typical features of the X-Man whose power he is using (such as sprouting wings for Angel’s Flight) though they will still reflect Skrull biology. For example, the wings are not feathered but rather bat-like with reptilian skin.

By Peter S Piispanen aka The Angel & Roy Cowan.

Source of Character: Gates of What If (MSH RPG Module). 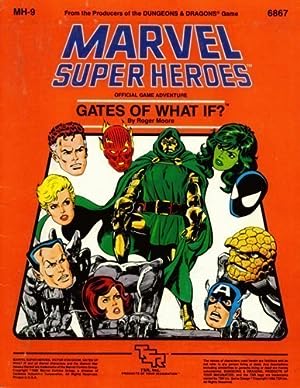 Gates of What if? (Marvel FASERIP RPG) 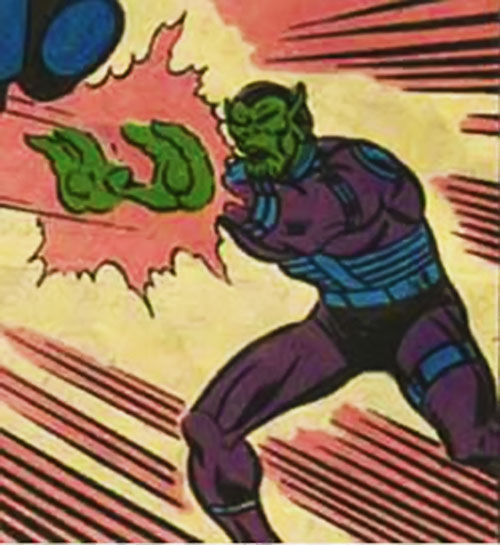