Skullcrusher is a world-class martial artist, who proved able to credibly engage the Master of Kung Fu in close combat. He’s very strong, and with his armour is able to take an incredible amount of punishment yet still fight.

His signature weapon is a long chain weighted at each extremity with a smooth, solid metal sphere ; the total length is unusual, as there seems to be about six meters of chain.

He mostly uses it as a pair of flails or chains, depending whether he wants to strike or entangle, and can execute all sorts of complex attacks and defenses with those, with great speed and perfect coordination.

Skullcrusher is a mercenary martial artist, working mostly in and around Hong Kong.

It was in this capacity that he was hired by the greatest thief and martial artist in Hong Kong, Cat (Shen Kuei). Cat was at that point working for PRC intelligence, for whom he was attempting to acquire a shipment of hashish crates containing the plans for a neutron bomb.

Cat knew somebody from the UK was acquiring intelligence to try and stop him, and reached the wrong conclusion that it was Shang-Chi.

Cat’s partner, the criminal Kogar, thus sent the powerful Skullcrusher to London. The mission was to kill Shang-Chi before he could further investigate their schemes and come to Hong Kong.

Ironically, Shang-Chi was unaware of Cat and Kogar’s activities — the British person opposing Cat was actually his ex-lover, the torch singer Juliette.

Shang-Chi survived the onslaught of Skullcrusher in a Londonian back alley, and soon left for Hong Kong to investigate a letter from Juliette. Skullcrusher, having failed to stop the Master of Kung Fu, went back to Cat.

Skullcrusher was but a dupe, though. Juliette was actually manipulated by Kogar. As to Cat, he saw Skullcrusher as a fool – but he nevertheless sent him to attack Shang-Chi again in Hong Kong.

This time, he was accompanied by another assassin — Pavane, who was also Cat’s lover. Pavane was jealous of Juliette, who was Cat’s ex. When she realized Juliette was accompanying Shang-Chi, Pavane readily knocked the torch singer out to use her as a hostage.

Despite this advantage and their weapons, both assassins were defeated by the Master of Kung Fu. Pavane was captured, but Skullcrusher managed to run away after threatening to crush the skull of the still-unconscious Juliette. He eventually ran into Cat, who got angry enough at his failure and his leaving Pavane behind to hit him several times.

Reining in his anger, and with Skullbuster still in town, Cat recovered Pavane and ultimately allied with Shang-Chi to defeat Kogar and destroy the crates.

Juliette stayed with Shang-Chi in romantic isolation. However her heart was actually torn between him and Skullcrusher, for whom she had apparently fallen a short time before he was sent to London to kill Shang-Chi.

Unable, as always, to take charge of her feelings she instead manipulated the 2 men so that they would fight each other, and each would think she loved the other.

Filled with anger, Shang-Chi invaded the current home of Skullcrusher — the temple of Po Lin. Skullcrusher had himself invaded the temple a few weeks before, threw the monks out, and hired a few lesser mercenary martial artists to serve as tests lest anybody come and try to challenge him to leave Po Lin.

Shang-Chi easily beat those men, and ferociously attacked Skullcrusher. While the Master of Kung Fu was convinced that Juliette loved him, Skullcrusher thought she clearly loved him and did not understand why Shang-Chi was deluding himself in thinking he had some hold over her heart.

This made Shang-Chi angry enough to break Skullcrusher’s chain and beat him up but Juliette broke up the fight, having chosen Skullcrusher. Dejected, Shang-Chi left the liberated Po Lin.

The torch-singer, still a slave to her passions, would eventually leave Skullcrusher to reunite with Cat. Skullcrusher has not been seen since his defeat at Po Lin.

Your average henchman and mercenary. He’s fairly confident, most of the time.

“Know, son of Fu Manchu, that although I harbor no personal enmity toward you, I am known as the Skullcrusher… and it has been necessary for me to find you before you leave London. You see, I have already accepted payment — to slay you !”

“I was unable to defeat you in London, son of Fu Manchu. But we are in China now, and China is different.”

“Do not think you have won, Shang-Chi, simply because you have stunned Pavane ! She is merely a woman.”

Advantages:
Lightning Reflexes, Schtick (Reach — must have his meteor hammer).

While he regularly spends some Hero Points  on AV (his chain is hard to avoid for long), he keeps most of it for LDD. His Martial Artist sub steadily alternates between EV and RV. 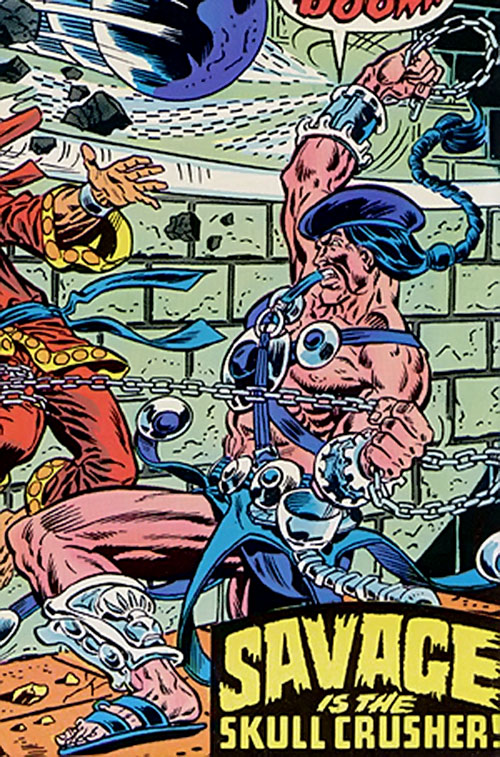 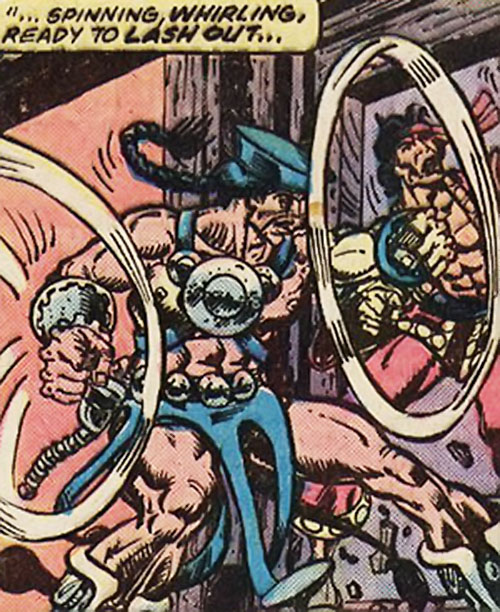 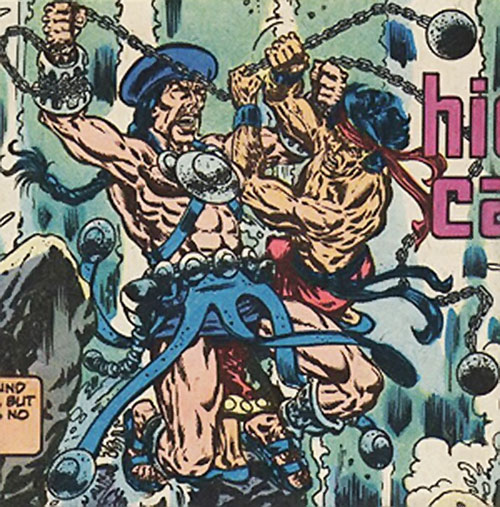