Skullfire absorbs ambient electrical energy, then projects it as a powerful burst. When he does this, his body glows from within and portions of his skeleton become visible.

The amount of power he can project is dependent upon the amount of electricity he can absorb. He has proven able to absorb the entire output of Halo City’s massive generator.

It has also been implied that Skullfire cannot be killed by normal means.

Skullfire is the last of Xi’an’s chosen X-Men. He was originally quite timid and fearful of his power, and unable to consciously control it.

His power originally manifested itself when he browned out an entire city block and released it. This destroyed his apartment building and killed his companion Reiko. He was found in Phoenix by Shakti Haddad, and received an invitation to join Xi’an’s X-Men.

After having his psyche violated by La Lunatica, he went over the edge. Fitzgerald became careless of his personal safety, willing to do whatever it took to get the job done.

When Xi’an left his X-Men buy the roadside, Skullfire took up the reins. He showed what he was really made of : a true leader, cool under fire and a clear thinker.

Skullfire led the X-Men until he was killed by Vulcann the Bloodsmith, and became a being of living electrical energy. The series ended next issue.

Skullfire is a tall man with shoulder-length straight red hair and intense blue eyes. He is usually unshaven. He came to wear a mask made of an osmotic micro-polymer in the form of an abstract skull – whiteface with black areas denoting the jaw and eye sockets).

He is always dressed in his X-costume. This is a dark blue bodysuit with a gold stripe running up the left leg to the shoulder, gold boots, belt, and padded arm bracers, and a bulky blue jacket.

Oddly, though many of his cover and advertisement illos show him wearing a black headband (see illo bar), he never actually wore it in the X-Men 2099 run.

Skullfire started out as a wussy sort of whiner. He was afraid of his powers and what might happen if he used them. He was saddled with a heaping helping of guilt and angst.

Joining the X-Men and helping them defeat the Synge Syndicate helped – at least he stopped whining. But at that point he still had no voluntary control over his abilities, and was prone to jump in without thinking.

Then he ran into Luna, who made him relive Rieko’s death. Fitzgerald freaked out, got mad, and stayed mad.

He became more hot tempered, more volatile, and more prone to do crazy things “just because”. For instance, while returning to Nuevo Sol from NewYork, fellow member Bloodhawk decided to stretch his wings and fly home. Skullfire jumped out of the moving plane and grabbed onto Bloodhawk’s ankles to “catch a ride”.

After Xi’an left them for the Theatre of Pain, Skull found himself as the de facto leader of the group. While this didn’t cut down on his wild nature any, he did rise to the occasion. Notably, he planned and executed the raid on the Theatre to save Xi’an. Then he led the X-Men into a new era in Halo City.

Metalhead : “This lady is what… In her 80s ? She’s probably senile or crazy by now…”
Skullfire : “No problem… I speak fluent crazy.”

Drawbacks:
Guilt (Reiko’s death), Minor Rage, SIA toward All-Out Attacks, Distinct Appearance (Skull mask ), SPI (General Insanity: Skullfire has no concern for life or limb, and may pull some crazy stunts for Thrills or to “get the job done”).

In his original version, Skullfire should have Uncertainty. He also was working through a Power Complication subplot…He could not use his power except in times of stress.

After he was “reborn” from the Graverobber’s manipulations, Skull was unable to completely “power down”. Thus, he constantly was surrounded by a flickering electrical aura. He became overconfident, thinking he was effectively immortal and could not be killed.

For the last two issues of the series, after he was blown apart by Vulcann, he attained Self-Linked Lightning at around 15 APs. It is impossible to determine for certain, since he used his power only once. 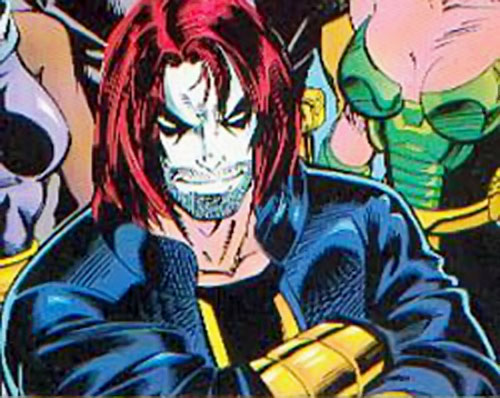 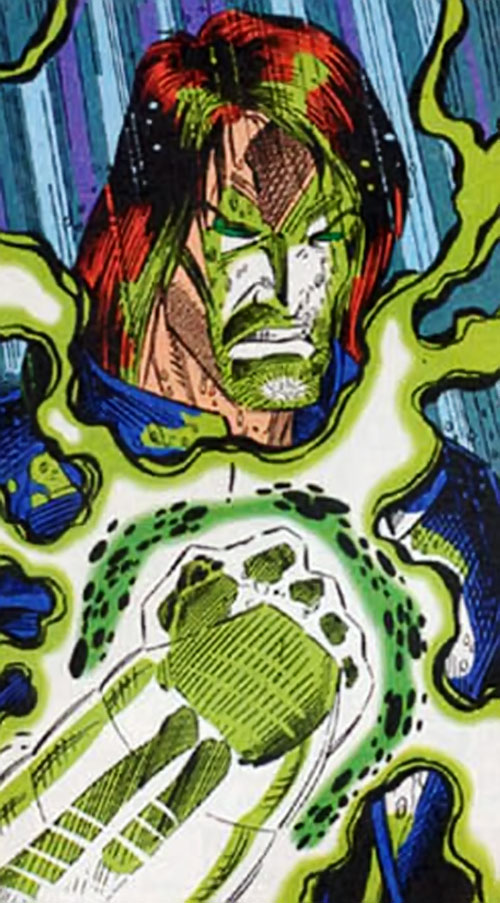 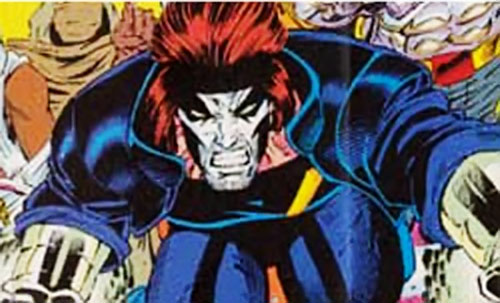 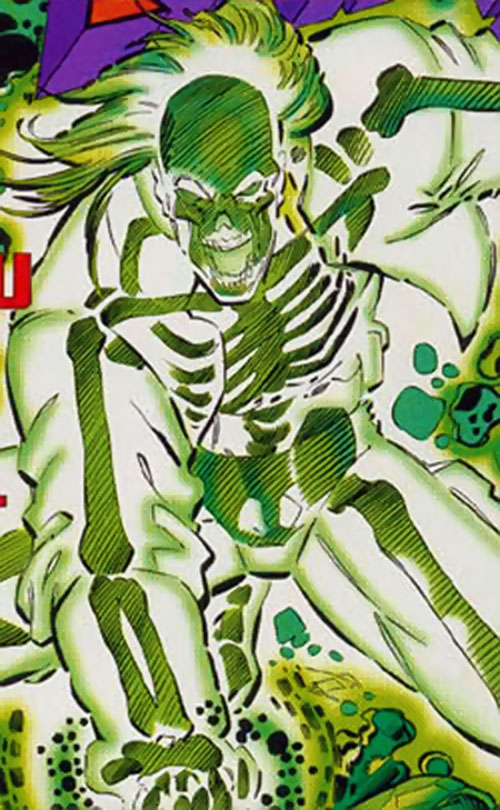