Celia Forrestal is a well-trained former Navy pilot. She also has a reputation as a relatively low-powered, but competent super-hero.

Her armored suit is known as the Argo Harness, and it was invented by her parents for their company Argo Technologies.

The Harness is an energy-transforming device that can absorb many kinds of energy, including heat, electromagnetism, and radioactivity, and either convert it into other forms of energy or store it for later use. Skyrocket normally uses this stored energy as bolts of heat, kinetic energy, or directed electromagnetic fields.

She can use the harness to fly by repelling the planet’s intrinsic electromagnetic field. The Harness can recharge itself from virtually any kind of energy. Any attack carried out against Celia with fire, radioactivity, electricity or any other form of exited particle will just make her more powerful.

On June 19th, 1995 (or seven years ago on a sliding scale) US Navy Lieutenant Celia Forrestal was denied a promotion she was eminently qualified for. Despite her idealism and patriotism, she seriously considered leaving the Navy.

On the 3rd of July, she returned to her parents’ house to tell them of her decision, at which point they showed her the Argo harness. On July 4th, the home and workshop of Celia Forrestal’s parents is attacked by the high-tech mercenary gang called Scorpio, killing her parents. She donned the Harness, and joined Green Lantern (Hal Jordan) in fighting off Scorpio.

A few days later, the Lantern came to her parents’ funeral and encouraged her to keep up the good work. In January, after leaving the Navy, Celia Forrestal first went into action as Skyrocket.

Up in the sky

Celia led a relatively minor, but successful career as the superhero Skyrocket in Saint Louis for seven years, fighting minor villains like Javelin from time to time. However, the cost of maintaining the Argo Suit slowly eroded her resources. This forced her to work in a Big Belly Burger fast food restaurant and reduce her activities as Skyrocket.

Then Josiah Power, CEO of the newly born Power Company offered her to be the field leader and chief of operations of the team. She would also be one of the associates of the Company. Celia accepted both to prove her worth and because of the opportunity of being Skyrocket full time and doing pro bono work for the Company.

The Power Company fought against the Strike Force, the Dragoneer, Dr. Cyber, and others. During her time in the company, the arguments between Skyrocket’s heroic ideals, Manhunter’s mercenary greediness and cynism and Witchfire’s popstar egocentrism were routine. But they were all kept in line due to Josiah Power’s positive influence.

One day, however, a robber shot Josiah in his house, hospitalising him. Tough the man was caught by the police shortly after, the Power Company was left unfocused and leaderless. Despite being frustrated by office politics and the mercenary nature of her employment, Celia decided to stick with the team. At the very least, she wanted to protect the others from the influence of Witchfire and Manhunter.

It’s about ethics in super-heroism

Conflict soon arose when Manhunter obtained a job bodyguarding a paranoid actor. Skyrocket tried to divert resources to stop Dr. Polaris, who was at that time stealing from high-tech industries. But there was no client to pay for that engagement. 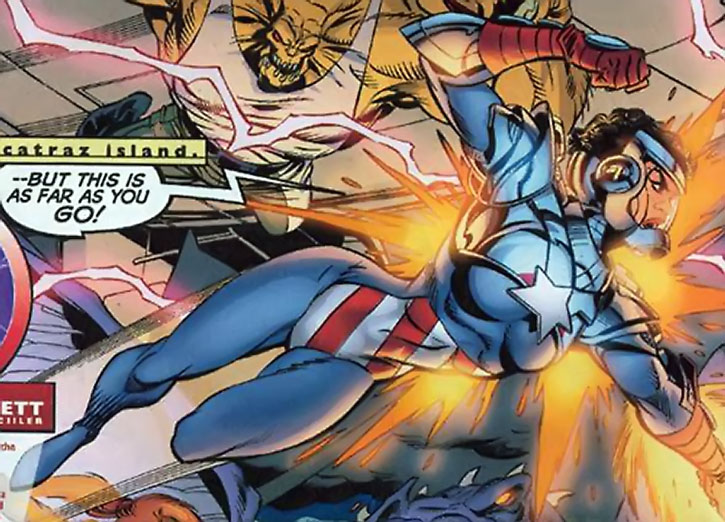 The Power Company, minus Manhunter and Witchfire, engaged Polaris and the Cadre at STAR Labs. Meanwhile, Polaris revealed his plan to cleanse the Earth of humanity. Furthermore, a mysterious entity that had been attempting to contact Skyrocket was revealed to be an alien Controller, held prisoner by the magnetic villain.

Witchfire and Manhunter both made their way to the STAR site to join the fight, and Josiah stirred in his coma. But Polaris captured the rest of the team, as well as the last component for the device he was constructing.

While the JLA tried futilely to reach San Francisco, Manhunter sought a way in through Polaris’ magnetic shields. Aided by Charlie and Witchfire, he managed it. Witchfire, still at the hospital, used her magic to kept up communications between the team.

Meanwhile, the Controller explained his plight to Skyrocket, and Polaris finished building his device, only to be betrayed by the Cadre. The Cadre and the Power Company defeated Polaris and freed the alien Controller, who promised to return – in a century or so. STAR Labs finally signed with the Power Company. Garrison Slate came aboard to replace Josiah until he would awaken from his coma.

Some time after that, Ariadne, a former servant of Dr Cyber, led the team into a trap set by the strange crystal entity which now called itself the Satanstone. In the Ashalanti dimension, Power Company members Sapphire, Manhunter, Striker Z and Skyrocket learned the history of the Satanstone, and the lost gem that could stop it. Reaching its temple, they battle its minions.

Meanwhile, on Earth, the Satanstone’s army of transformed demons engaged heroes across the USA. Garrison Slate, Silver and Charlie Lau’s plan got them into the heart of InterSect’s complex, where they disrupted operations on Earth side of the portal.

Bork, Witchfire, Josiah and Jen Stuart (the latest driver of the Haunted Tank) reinforced the others in Ashalanti. The gem that Jeb Stuart gave Jen turns out to be the same gem necessary to stop the Satanstone.

Skyrocket used it to do so, ending the threat of the Satanstone in both dimensions. The Power Company then returned to Earth.

Skyrocket has modelled herself after the pattern of the classic upholding the good/responsibility-of-power superhero. As such she is strong, focused, serious, idealistic, committed and altruistic. Firestorm once said she was “tailor-made” for the JLA.

But she also has to deal with the real world, which in her world means having to work for a private company to pay the bills. The tension between her ideals and the necessities of the company (customers, publicity) is a perpetual dilemma for her.

The egoistical purposes of Manhunter and Witchfire usually triggers her temper, but she has enough sense to know when they are right. She sometimes even seems naïve in front of the very different point of views of her partners. However, she can fall into a slightly depressive mode in private occasionally, when the roughness of the corporate world seems to overcome her.

Despite her doubts, she is loyal to the team and has grown to respect most of her teammates. She feels also that someone like herself is a necessity for the Power Company. She is also a competent and respected field leader. Even the narcissistic and self-centered Witchfire obeys her.

Having worked in a Big Belly Burger for 7 years, she will NEVER eat in one of these fast food restaurants. She simply knows too much about it.

(While fighting Javelin) “You’re getting forgetful in your old age, or you’d have remembered I can just absorb the kinetic energy of your explosion and send it right back at you !”

Lt. Driver: “I thought you folks at the Power Company charged for your services.”
Skyrocket: “That’s what pays the rent, Lieutenant, but in my spare time I do what I like.”

“You’re a man of conscience, Josiah, and much as I worry about the mercenary aspects of this company, I don’t worry about your good intentions.”

“Two priorities ? What about doing good ? Saving lives ? Where does that fit in ?”

“I can get a job, if I have to. They have Big Belly Burgers out here too, that need managers. I can muddle through, doing what matters, instead of whoring myself out, setting “priorities” about profit and publicity.”

“I’ve been thinking about this all wrong. A company’s not just the business part, any more than the Navy’s just planes and ships. There are people who need help right here. And if I walk away, that just leaves them in Witchfire and Manhunter’s hands. I don’t think I like that.”

“Never walk away from something just because you don’t like it. Make it better first.”

Celia worked as a Vault Guardsman for years before leaving due to lack of opportunities. She went to visit her parents, former scientists in Am-Can (the ones who designed the first Vindicator suit) who had just finished the Argo Harness.

Celia’s parents were killed by AIM, who were trying to steal the Harness. Celia received help and encouragement to become a super-hero from Iron Man. After siding with Stark in the Civil War, Skyrocket now leads a team of the 50 states initiative in Missouri.

Drawbacks:
Debt (cost of maintaining the Harness, prior to joining the PC), SIA to Upholding the Good, Secret Identity.

In her solo years, Celia’s STR was 02. When she worked in Saint Louis, she also had a Connection – Saint Louis Police Department (High). 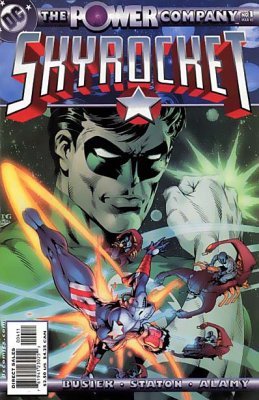 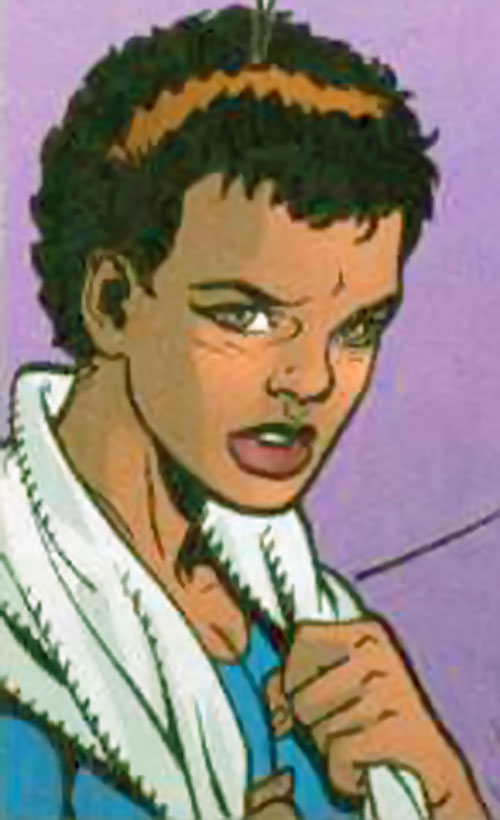