Skyrocket Steele is an obscure Golden AgeSuper-hero comics from the late 1930s to the early 1950s character. He appeared in 1938 at Centaur Publications.

Centaur was an interesting publisher, but also a brief-lived and chaotic one. They never got a real hit. Eventually, much of the staff was absorbed by Timely (who’d become Marvel).

Steele is in the vein of pulpsCheap, often lurid novels in the US during the 1920s and 1930s heroes. He resembled famous 1930s heroes such as Flash Gordon and Buck Rogers.

He is chiefly notable for being Bill Everett’s first published character. Mr. Everett would soon become a notable comics creator. He’s chiefly known for being the dad of Namor the Submariner, of Amazing Man (John Aman), and a co-creator of Daredevil (Matt Murdock).

On such a timeless flight

The material… well, it reminds me of an inexperienced Gamemaster improvising. Though the art acquires a certain class as Everett’s craft matures.

But if you need a 1930s hero for some retrofuture story, he’s not a bad choice. And that the material lacks definition just means you have more room to make stuff up.

Captain Dodge seems to be a professional troubleshooter.

He appears to be military or ex-military. Perhaps some sort of fighter pilot.

Skyrocket Steele has two aides – the moustachioed Peter Muhr and the beautiful Sari Marston. Sari is also Steele’s lover, and Peter commands “the brigade”. These seem to be troops that accompany him in the field.

Cpt. Dodge isn’t seen doing much. He’s more a passenger of the story than its protagonist. And the more the series progresses, the more useless he gets. Since most RPGs assume active and conquering protagonists, this suggests modest game scores. 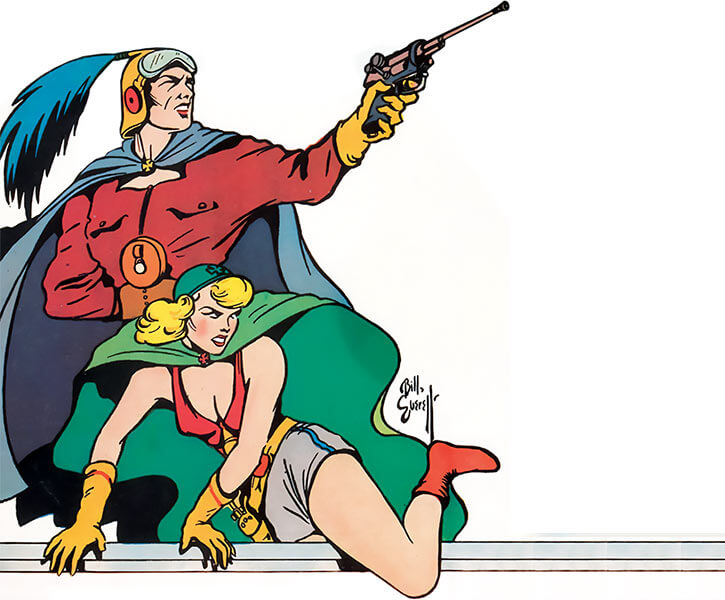 As the adventure starts, Cpt. Dodge requests a “range-scope”, a sextant, a “G-2 camera” and “all the arms you can find”. But we only see him using a revolver and a flashlight.

His sidearm looked very much like, well, a 1930s American revolver. On one panel it’s identical to a S&W Registered Magnum (later called the M27) with a 6″-ish barrel. It’s only discharged once (and misses).

However, on other panels and on the covers, the sidearms look more like Flash Gordon rayguns. Yet, when Sari discharges one, it looks just like a normal gunshot.

One closeup on an infantry rifle shows some sort of electric coil in the receiver. But when we see a battle, it has become a melee using rifle butts and bayonets.

(Howbeit, I suspect that this is because it’s more a riot than a formal battle. So let’s not hastily draw conclusions about the rifles’ capabilities.) 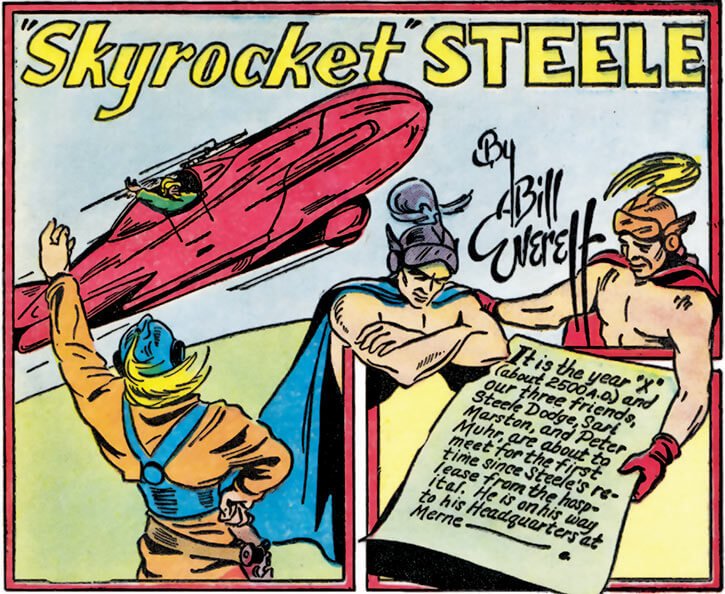 Skyrocket Steele operates in a setting that evokes the planetary romance genre  . There’s little worldbuilding, but we can make scattered observations.

There are exceptions though – for instance (wired) telephones include a mirror where you can see the other person in real time.

The curious “it is the year ‘X’ (2500 AD)” caption might be because it’s Roman numerals. Bill Everett and Roman stuff go well together. So perhaps it is the tenth year of King Kurt’s reign.

The story does have space travel. But it’s not obvious at first. It takes a caption to clarify that one outpost isn’t on Earth.

Scattered observations about that : 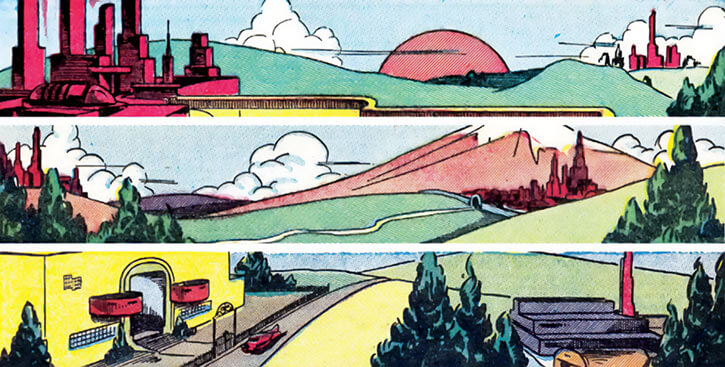 We never see any alien, FWIW.

Sites on Earth have been subjected to night attacks by small, unseen assailants. These are nicknamed “bats”, though none has been stopped or caught. The dastardly Roy Vance is suspected of being behind these attacks.

Furthermore, the planetoid outpost at Mannin has gone silent. Surveying the site using a Kodacon telescope shows no guards on duty.

Recently released from the hospital, “Skyrocket” Steele reports to King Kurt. He volunteers to fly the King and a guards party to Mannin to investigate.

Everyone in Mannin seems to be dead. The party also finds a sort of model plane, though no-one seems to realise it is a weapon and likely one of the mysterious “bats”.

Within a hidden lab, the King and “Skyrocket” Steele find one Invex. This XXth Century bloke was “revived to life” by an ally of the dastardly Vance Roy. A genius and inventor, Invex has been working for Roy.

Vance and Invex easily defeat Steel and the King. Vance’s forces ambush and kill all the guards (likely including Peter). They also capture Sari.

However, Invex comes to realise that he’s on the wrong side. He convinces Roy (who is dastardly) to keep the King, Steele and Sari alive for ransom.

Allying with Steele, Invex uses complicated techno-subterfuges. His super-inventions allow them not to be detected by Roy’s men.

Invex and the only three survivors of the expedition (Steele, Kurt and Sari) then return to Earth. 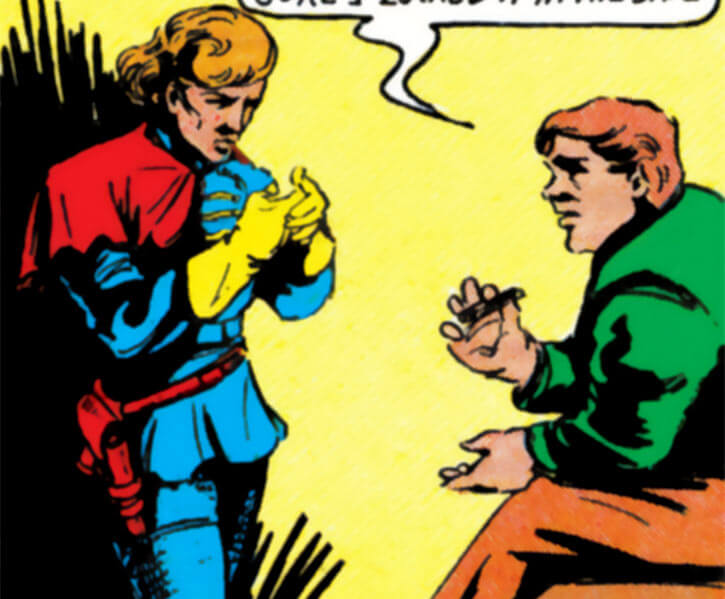 Sari steals Invex’s formula, and a spaceship. She leaves for Venus, hunting for Vance Roy.

There presumably are political reasons why she defies royal authority to fight the dastardly Roy. But these aren’t explained.

She is unexpectedly reunited with her brother Paul, an agent of the Red Men. Paul was clandestinely on Earth to procure ammo for the Red Men’s struggle against the Yellow Star Army.

However, Venus is a war zone. The Marstons are intercepted by two Yellow Star crafts. They crash after downing one.

Furthermore, “Skyrocket” Steele comes in to arrest the Marstons for conspiracy. Paul knocks him out – which Sari doesn’t mind as long as Steele isn’t seriously wounded.

Sari’s plan works. They do run into Vance Roy and one of his lieutenants, Neo Nunn. Sari guns down Neo to save Steele, and Paul knocks Vance out. However, they have to leave the dastardly Vance Roy behind to medevac Paul.

Realising that the Marstons weren’t working for Roy, Steele Dodge decides not to arrest them.

Steele’s hair colour changes from issue to issue. This might be a printing problem.

Dodge comes across more like a tepid detective than a two-fisted daredevil.

He seems to be one of the few people who’s truly loyal to King Kurt. Which suggests that Kurt might not be too swell a feller.

For the sidearm I’d go with standard magnum revolver stats. I’m fond of retrofuture settings where the tech is antiquated, with some inexplicable exceptions (such as space travel). And we have little reason to assume higher stats.

The modest stats are actually a bit higher than the actually demonstrated performance. He was just… there ?

The blocky Skills are also generous – more so than our usual statting. The Skills are more based on how 1930s comics characters *usually* work, but Steele doesn’t truly match the archetype. If you want him to have narrower Skills, use the stock soldiers article as a guide. 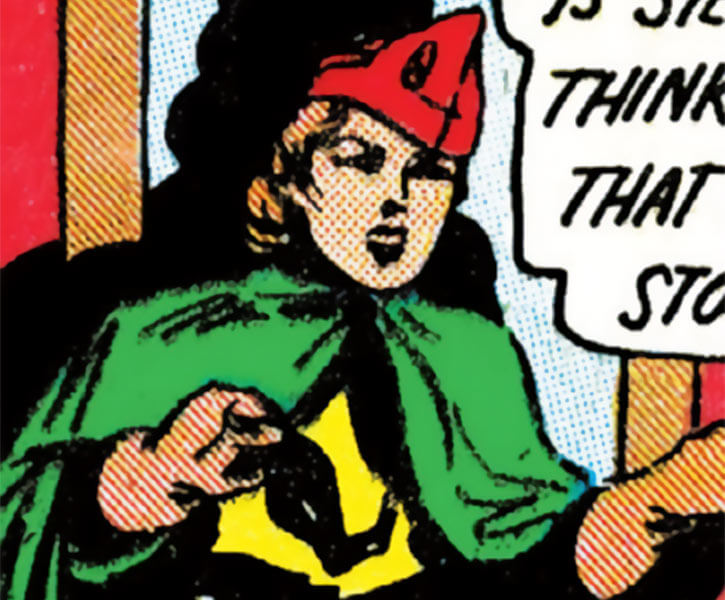 Sari in her dashing uniform.

Sari follows the opposite trajectory as Steele. She starts as a helpless damsel sidekick, but then becomes the more dynamic of the two. And capable-ish.