Slam is a two-fisted 1930s private dick. But he has the distinction of having debuted in Detective Comics #1, which has to be worth something. His adventures continued to be published until 1949.

Some Slam Bradley adventures were published where the character was called “Biff” for licensing reasons. It could be considered an alias. Or perhaps Slam has a brother called Biff.

Post-Crisis, Slam returned in an interesting manner in Catwoman, as a 1940s-style noir detective in his early 50s. No, don’t try to do the maths.

Slam Bradley is a fearless and remarkably proficient detective. His speciality is missing persons cases, and he’s sure good at finding them). He also is highly charismatic, with a trustworthy manner and natural authority.

Furthermore, he’s an extraordinary brawler. Even in his 50s, he can reliably dispose of five thugs with baseball bats in a small room. Or swat a gun out of some crook’s hands before he can react. And he hits like a mother.

Even if he usually takes a beatin’, he sure keeps on tickin’. Bradley is a fast healer, and managed not take no permanent damage despite the incredible number of blows he took. Even broken limbs will heal nice and fast. A hot bath, a whiskey and a night of sleep are often enough to wipe out the effects of a beating.

“Slam” Bradley earned his lifelong nickname when he was barely 12. A kid five years older and 50 lbs heavier than him attempted to bully him, and Sam decked him in one punch. A pugilist was born, and he never looked back.

Slam drifted a bit during his youth. He was briefly a soldier and MP. According to one account, he fought in Việt Nam in the early days of that conflict. Then he became a policeman, then settled on a career as a private investigator. That suited him fine – he didn’t like taking orders, and had a taste for seeing justice done.

Slam Bradley’s P.I. career was rich and rambunctious, and he regularly moved to another city. For a time his modus operandi involved elaborate covers. He thus worked in a variety of profession, including heavyweight prizefighter.

He and his partner (and best friend) Shorty Morgan had adventures both mundane and bizarre. The fought :

They also foiled industrial sabotage, were accidentally flung into the far future, and investigated a crooked television quiz show by disguising themselves as the animal mascots of the show.

(This is pulps-like 1930s “men’s adventures” tales with a he-man protagonist. So as you’d expect the depiction of women and non-White persons isn’t the swellest).

Slam romanced several women at different times in his life. But what he had to offer was… mixed. Never quite knowing when he would come home beat up, never having enough money to make ends meet, never looking ahead to what would happen to them in the future.

The exception was when he married a Red Cross nurse named Erica Chase. They had fallen head over heels in love one afternoon and were married the next month. They had a child together — Sam Bradley, Junior — and they raised him more or less together for several years, with Erica taking most of the responsibility.

Eventually she was tired of being a one-woman show, both in parenting and other aspects of their lives. She divorced him, obtained custody of Junior and moved to Metropolis.

Slam was no good dealing with his grief. He dove into the bottle for solace more and more. But somehow he managed to make ends meet, curtailing his private eye activities and focusing on his life in (much less expensive) Cleveland.

He had trouble with his son, who eventually followed in his father’s footsteps. Slam used his contacts to get his son a position in the police academy when he expressed interest. The young man became a patrol officer, then a detective, on the Metropolis Police Force. Although there was a great deal of resentment between Junior and Slam for some time, they reconciled.

Tiring of Cleveland and the bad memories of Erica there, he eventually moved to Gotham.

It’s not a public inquiry

In 2001, Bradley was recruited by the Mayor of Gotham City to investigate Catwoman. Catwoman was reputed dead, yet the Mayor had shady reason for making sure. Bradley took the job, and was quite efficient at it. He established there as a connection between Selina Kyle and Catwoman. Although Kyle was also believed deceased, he established that the corpse in her coffin wasn’t hers.

Despite mob pressure to intimidate him into revealing what he knew, Slam Bradley continued working. He came to the conclusion that Catwoman and Selina Kyle were the same person, and that she was alive. However, he had come to develop empathy with Kyle’s guts, class and hard life. Thus, he didn’t feel like turning her over.

She met him in his office, and that encounter sealed his decision. He burned the files he had on her. Mr. Bradley told the Mayor he dropped the case due to the lack of a trail.

And when I find the reason

Bradley and Kyle became friends, and often operated together. Slam’s strong sense of justice has clearly influenced Selina. Although she was at first out to protect the East End of Gotham by simply taking down its predators, she saw from him the difference between justice and revenge.

After Selina’s world was devastated by Black Mask, she and Slam became lovers. Slam had been in love with Selina for almost a year, but he felt bad about having Selina choose him when she was reeling.

For months, they kept a torrid affair going on without actually talking much. But the wise old guy knew where it was headed : nowhere. Selina just needed an anchor, and he knew their relationship could only crash sooner or later. Besides, Selina’s mysteriousness and fierce independence made the sleuth too vulnerable to her whims for his comfort.

With a heavy heart, he respectfully dumped her by explaining the truth. They still remain close friends and work together very frequently. If anything, Selina’s respect for Slam has been increased by the way their affair ended.

Look, it’s a classic, OK ? And of this writing, it is a song a man in his early 50s would have listened to as a high school student, so there.

The character’s original visuals were based on boxer/actor Victor McLaglen  .

Bradley’s mugshot is in the dictionary, under “hardboiled”. He’s a tough as nails private eye with a strong noir, 1940s vibe – and a very dated vocabulary. He has a fatalistic, world-weary philosopher-with-a-whiskey outlook. Slam walks like a bear through endless cases of corruption, human frailty, crime, betrayal and violence.

Being a salt-of-the-earth two-fisted private eye, he always sides with the underdog and fights for justice. Despite his disillusioned outlook he has, of course, a heart of gold.

Speaking of fists, this gumshoe still enjoys brawling. He will not go out of his way to provoke a brawl, he doesn’t advertise it, but Slam welcomes any opportunity to engage in fisticuffs. He will end up in pain and with various band-aids all over him the following morning, but he’s just a born brawler.

If he has to use guns (for instance, when facing multiple armed killers with no possibility to close in) he will shoot to kill and walk away. He doesn’t have a code against killing, and didn’t hesitate to drop a man 30 floors because he had tortured his mistress to death. And almost nobody hits Slam Bradley and gets away with it, even if he has to wait for an opportunity.

Bradley is not particularly educated and is something of a bull in china shop. But he has a fantastic amount of willpower, and seems immune to fear. For instance, he thinks nothing of beating up a mob contract hit man to get a revenge over a prior beating. Despite the obvious risks of vendetta. He even stood up to the Batman’s intimidation, and once engaged in fisticuffs with him.

Ain’t getting any younger

Bradley smokes like a chimney and drinks like a fish. He drives a battered old automobile that looks every bit as weather-worn as he is. He is a big R Romantic with something for classy dames – although he knows very well how love always lead to pain and loneliness.

He also has a gruff, “it was before better, nobody takes pride in their work anymore” attitude, although he’s not really a conservative. For instance, despite his old-school 1940s mannerisms, he didn’t even bat an eye at Holly and Karon’s relationship.

“Call me Slam. ‘Mr. Bradley’ sounds like somebody’s teacher. Mind if I smoke ?”

Holly, to a very drunk Slam who started and finished a huge brawl : “Look, Slam, you didn’t have to take the *entire* bar…”

Helper(s): www.thebraveandthebold.com (effectively defunct) for the entry I noticed just as I though I had finished the writeup :-). Also John Colagioia and this Brad Ricca column  . 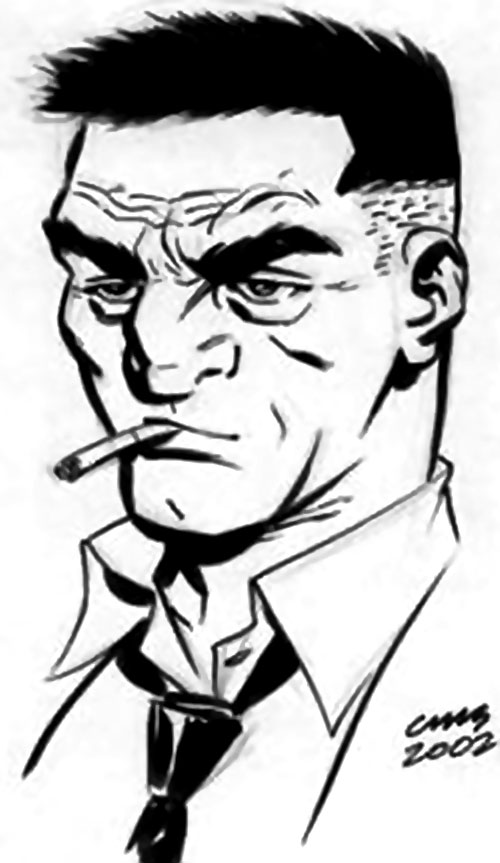 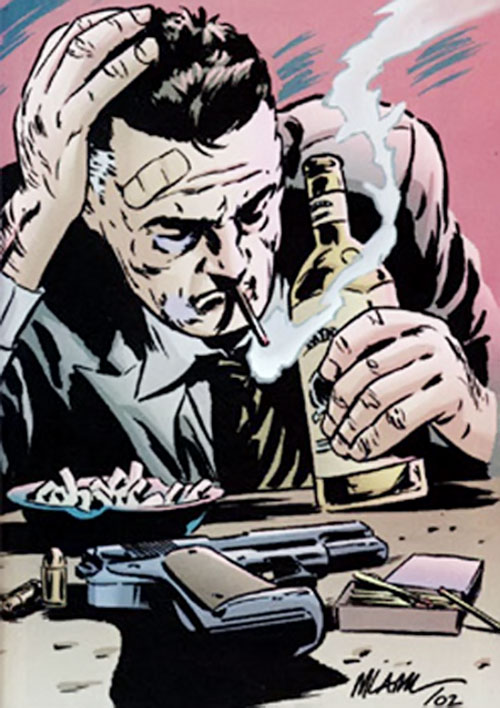 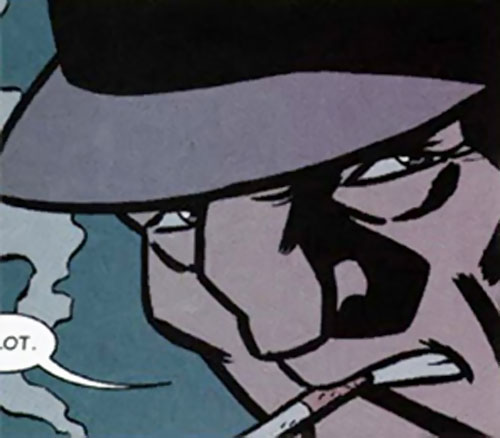 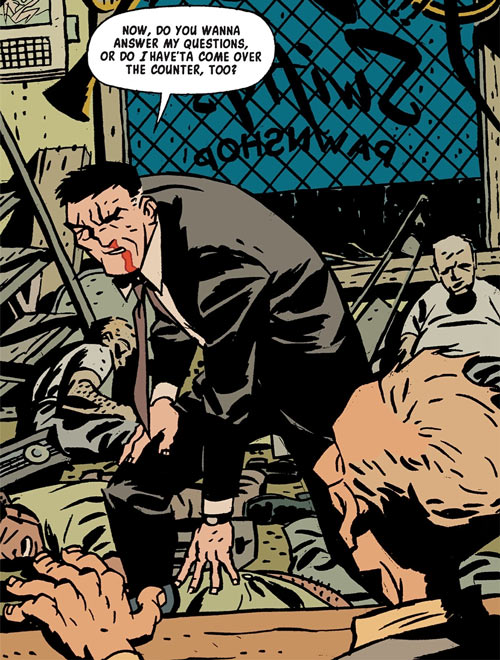 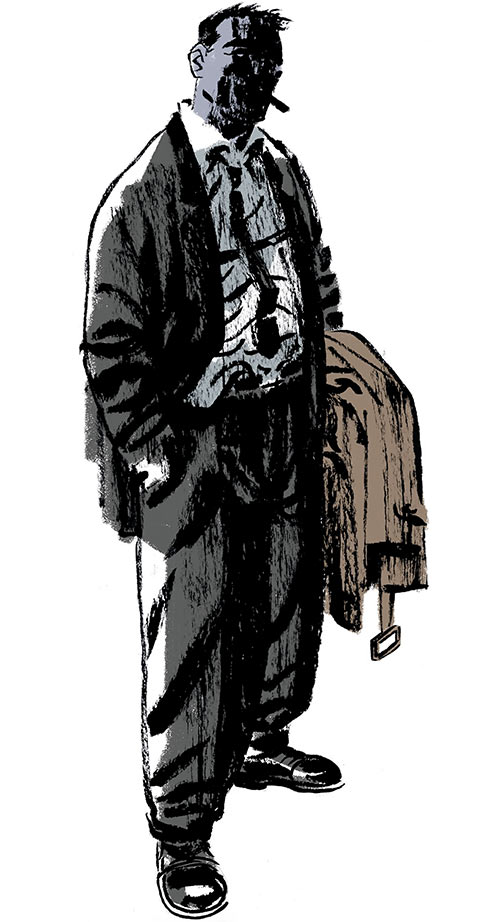 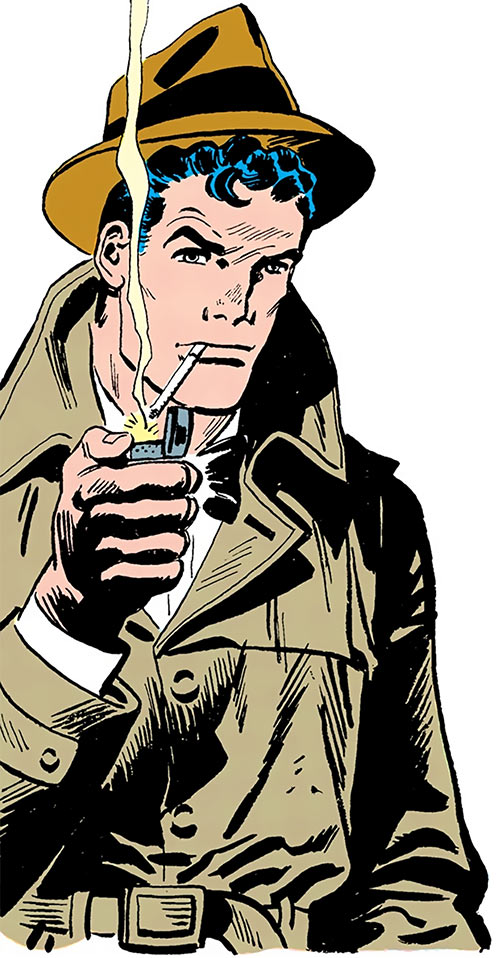