Slaughterhouse Smith has what many people would consider to be Superman-like powers :

His exact power level is unclear. But he seems to be well below the level of a Kryptonian.

He has explained that his power level was slowly and steadily increasing over time. But it is unclear whether this process stopped some time after he got his powers. I would theorise, based on exactly nothing, that his powers are still increasing but at a glacial pace compared to what it was during his teenage years.

In the 1960s he used to fire laser beams from his hands as well as from his eyes. But he no longer seems to do that. I’d assume eyebeams are much more accurate anyway.

Smith is also a veteran mobster and general tough guy. He is considered to be quite scary by most people.

He once made a remark implying he had knowledge of the most probable futures. Perhaps he had visions during his coma. Or perhaps he has a high level of deductive ability when it comes to studying history ?

As a *tentative* timeline for Slaughterhouse Smith, I would estimate that :

His cultural roots seem to be centred on the 1945-1955 period. He’s definitely a member of the so-called “greatest generation”.

Smith just woke up one morning able to see more clearly, move faster, exert more strength, etc.. Those abilities kept growing until he realised he was now a superman.

While he was coming to terms with this his father — the leader of a small Eastside mob running rackets — was killed by a rival gang. The younger Smith, perhaps 16, took over. He personally killed every member of the gang that had killed his father, manually ripping their spine out of their bodies.

Smith soon took over the city and built up his power base from there.

In the years prior to the creation of Team One (likely 1965 or so), Slaughterhouse Smith was ruling the largest criminal empire on the East Coast – period. He also had the immense edge of being one of the very few known superhumans. Basically, the list boiled down to him and Mister Majestic.

(Though there were other Kherubims and several Daemonites, they were either thought to be human adventurers (such as Saul Baxter aka Jacob Marlowe aka Lord Emp or “Lucy Blaize” aka Zealot) or flying below the radar (such as Helspont).)

His super-powers and underworld influence let Slaughterhouse Smith and his syndicate get away with far more than murder. In the closing months of the 1950s they attacked an Army convoy, using automatic weapons. The mobsters took the entire shipment to arm their made men with military firepower.

I’m not saying it was aliens

At the same time the first American team of extraordinary heroes, Team One, was assembled, Smith was approached by the Daemonite lord in exile, Helspont. The monster proposed a joint venture. Smith would help Helspont break the human race using their own technology, in exchange for domination over whatever was left.

Along with the powerful Daemonite and his alien troops, the superhuman crimelord and his heavily-armed men took over the North Dakota nuclear missile silos. But Helspont then ordered for the first nuclear strike to be conducted against New York City. Which wasn’t in the agreed-upon plan.

Slaughterhouse Smith refused this order. He demanded that the missiles be aimed at Washington D.C. instead, since he had special ties with the Big Apple. Helspont refused and revealed that he now held sway over Smith’s men. Along with the power-armour clad Daemonite troopers of Helspont, they mentally-dominated mobsters all aimed their weapons at their don.

Even his consigliere, Daniel Pike, who had long ago come to the conclusion that betraying Smith would be stupid and counterproductive, was enthralled by the alien lord.

As the freshly-assembled and still untrained Team One hurriedly burst into the base, Slaughterhouse Smith turned his might in equal part against his men, the Daemonites, and Team One. But as he came to duel Saul Baxter, Slaughtersmith was felled by one of Baxter’s potent mental blasts.

Smith’s superhuman physiology would not just allow him to die. He stayed in a coma for 35 years in a clandestine medicalised room in a Park Avenue basement. There, his faithful valet Ruddock (whom Helspont never turned against Smith) kept his employer breathing. Breathing, and dreaming of revenge against Saul Baxter.

In 2000, Ruddock found out that Smith’s daughter had had a son. The youth had the same powers as his grandfather.

Dreaming of revenge against the descendants of Saul Baxter (who was officially dead), Ruddock told Samuel Smith the truth about his grandfather and his powers. This is only then that Ruddock realised the younger Smith was an utter psychopath and a serial killer.

The aged butler was crushed by this blow to the Smith name. This was compounded by decades of lingering guilt about having once planned to betray Slaughterhouse Smith. In his despair, Ruddock stopped Slaughterhouse Smith’s life support equipment. He then took a suicide pill, dying near the inert form of his master.

Samuel Smith murdered multiple persons in order to find “Mr. Marlowe”, the supposed descendant of Saul Baxter. But he was killed by Grifter.

No longer being on life support did not kill Slaughterhouse Smith. He eventually woke up from his coma on his own, likely circa 2001.

Slaughterhouse Smith discovered the modern world with consternation. Still, he worked on recovering his position as a feared New York city wise guy. However, he now seemed to be more of an independent operator than the leader of a permanent crew or mob.

His fearsome power and rock-like determination proved as redoubtable as ever. He became (or rather returned to being) a seemingly major figure in the New York City crime scene of the WildStorm Universe.

In 2007, the experimental StormWatch PHD team was sent against him. This was the result of a plot hatched by a superhumans-hating bureaucrat in StormWatch’s HR department.

Learning about that, Slaughterhouse Smith just went to drink at the bar right in front of the precinct house hosting the PHD. This would force the PHD team to try and apprehend him before superhuman reinforcements could arrive.

Confronting the team, Slaughterhouse Smith casually disposed of them and collapsed the entire building on them. Howbeit, the PHD operatives all unexpectedly survived thanks to the Monstrosity – though most had to be hospitalised. Bitterly making strangely accurate predictions about the future, Smith then flew away while expressing his scorn for the modern world.

A Greatest Generation tough guy, mobster and killer. He’s deep in a nostalgia trip and only feels contempt for the ’weak‘, ’soft‘ world of the 1990s and 2000s. Smith considers himself to be classy, principled and a “real man” unlike the “pansies” of today.

While he will unhesitatingly kill when necessary, he’s not a casual killer. Smith knows the value of soundly thrashing the opposition without killing them, just to work on his rep as one of New York City’s toughest guys.

Smith drinks a fair bit of whiskey. But by the standards of his time would not be considered unusual, much less an alcoholic.

2009 EDIT: I guess that was the current success of the Mad Men TV Series, portraying an old fashioned 1950s American male has gotten easier.

But by God, we’re *American* criminals

Although an out-and-out criminal, Smith has hinted he considered himself a responsible member of society. This is reminiscent of the image some old-school mobsters projected in the 1940s, wanting to be considered as patriotic Americans first and mobsters second. In fact Smith might have been old enough to be a part of the alliance between cosa nostra and the OSS.

He strongly hinted that he would act as a vigilante when faced with crimes he considered to be ’dirty‘, such as a psychokiller preying on women. Or out-of-control post-human punks slaughtering civilians. He definitely refused to be part of a plan threatening New York City with nuclear weapons.

This is a stark change from his younger, 1960s way where he told Helspont he did not mind betraying the human race since he did not feel he belonged to it. It was likely the possibility of his native New York City being annihilated, shifting the idea from abstraction to reality, that led to this complete change in attitude.

“Heh. You ignorant son of a bitch. Nobody hires Slaughterhouse Smith. I give orders. I don’t take ’em. And I don’t shoot people in the back. Someone’s gonna die at my hands, I make sure they know it.”

“Turns out I had a grandson with powers like mine. You know what he did with ’em ? Cut up women. In my day, we knew better things to do with broads. He hadn’t gotten himself killed, I’d probably have iced the little punk myself. You people these days… you’re soft. Not just fat like you, Dino. Soft on the inside, I mean.”

“Buncha pansies. With your fruity actors and dames so artificial they look like plastic dolls. Whatever happened to Betty Page ?”

Drawbacks:
MIA toward his self-defined sense of honour.

He has not appeared that much and his power level seems to increase slightly over time. So the stats are tentative at best. Consider them a possible baseline, as several (DEX, STR, BODY, Flight…) could easily be higher.

The superhuman senses are mentioned but not demonstrated, so I gave him low-ish APs in a basic selection of those.

The Running is thoroughly undemonstrated, but hinted at and it makes enough sense to be added in the main stats.

Source of Character: Wildstorm Universe (The Team One Limited Series and StormWatch: PHD (2007)). 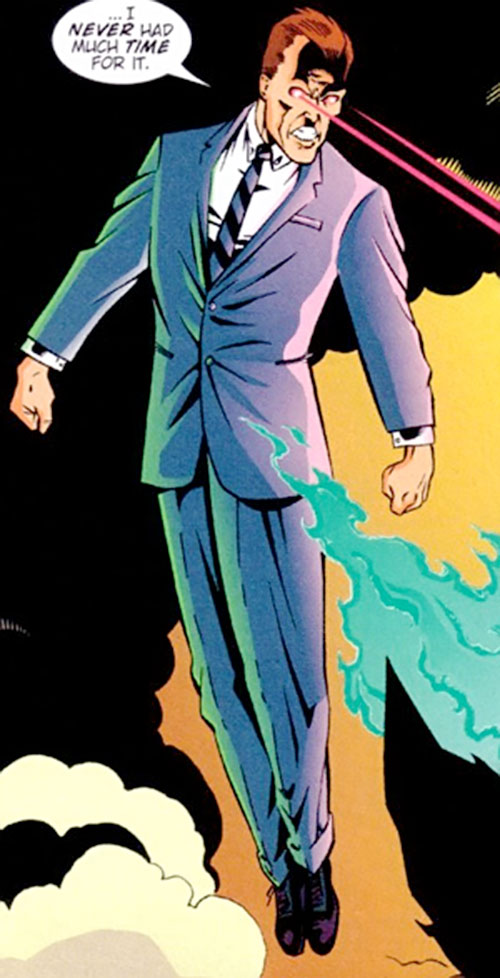 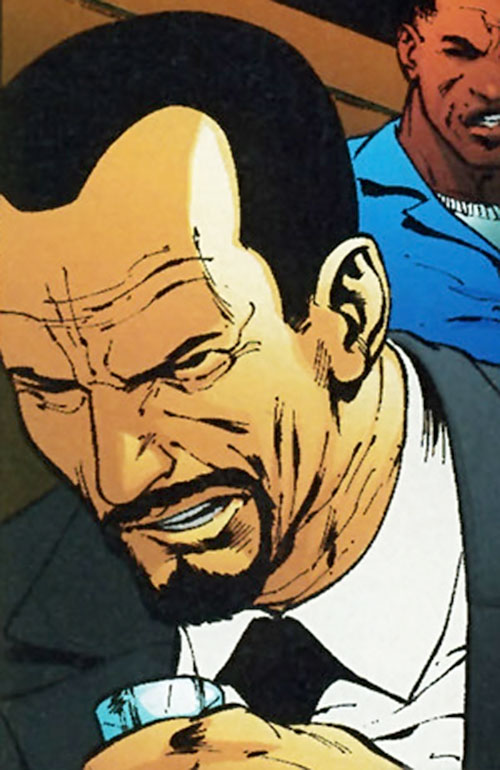 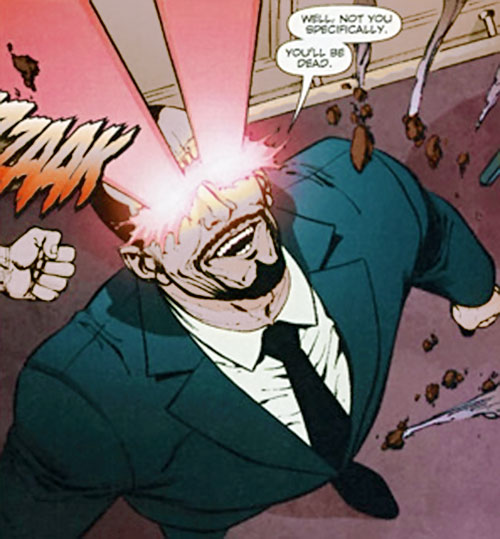