Back when this character profile was done, Slayback had but two genuine appearance. But one was in the first, 1993 Deadpool mini-series, so at least that was high-profile.

At this point, Slayback is a ready-to-use combat encounter for low-to-mid powered heroes. Just add water and don’t sweat the cooking.

Slayback is a well-trained, unhinged Department K assassin. His body has been colonised by techno-organic  circuitry, reanimating him as a sort of undead cyborg. While he remains in charge of his thoughts and body, it is now superhumanly strong, tough, fast and durable.

His main asset are his arms. These can extend or retract at lightning speeds. He can also make each of his hands large enough to hold a person. As long as his opponents are within range, thrusting his suddenly gigantic hand forward and grabbing his opponents is easy. This works even against extremely agile targets.

His stretching arms and huge and clawed hands, moving at extraordinary speeds, also make it very difficult to hit Slayback in melee. If only because getting close enough is quite a feat. It usually takes Wolverine-like prowess, speed and ferocity to successfully engage Slayback in melee.

His tissues (hardware ?) are also flexible, self-repairing and reconfigurable to some extend. For instance he can grow claws or turn his hands into a sinister, jagged pike or drill.

Terraerton, from Melbourne, was part of a secondary project associated with the complex Department K military-industrial world. Department K is a Canadian-hosted but NATO-funded project in superhuman killers and soldiers.

He’s known to have operated as part of a team comprising Deadpool, Sluggo, Garrison Kane and Copycat. But there is no evidence he was related to either the “Roman Numeral Weapons” projects. Such as Project:Rebirth, aka Weapon I, which eventually created Captain America (Steve Rogers) or the best-known project among those, the tenth one — Weapon X.

He likely was superpowered while an employee of Department K, but the details are unrevealed. It is possible he received a small quantity of techno-organic circuitry, making him a symbiotic cyborg.&

The team was apparently fairly successful. Slayback mentioned that, at this point, he had money, a family and a comfortable home.

Slayback was apparently a savage, psychotic killer revelling in unnecessary slaughter. It got so bad that Deadpool murdered him to make him stop. Although the merc-with-a-mouth did a particularly thorough job to make sure Terraerton could not survive, it failed.

It took ten years, but techno-organic circuits grew within Terraerton’s body until they reanimated him. Granted a new life, Terraerton dedicated himself to taking the most painful revenge he could think of on the elusive Deadpool.

He got his wish in 1993. Deadpool and other members of their old Department K unit got involved into the fracas surrounding the will of the deceased crime lord Tolliver, who apparently owned some form of ultimate weapon.

Most members of the old unit converged on the hiding place of the weapon at roughly the same time. That led to a clash between Slayback, Deadpool, Copycat and Garrison Kane. The latter two eventually sided with Deadpool.

During the fray Slayback accidentally impaled Copycat, who was trying to protect Deadpool. Although this shocked him since he liked her, he got over it within seconds.

Slayback was defeated when Weasel, Deadpool’s associate, activate Tolliver’s ultimate weapon. It was an ADAM android from the far future, programmed to destroy any weapon and enforce peace. Slayback was pulverised, and Kane had many of his bionic parts neutralized.

However, Deadpool managed to convince the ADAM unit to leave him alone so he could use his healing factor to save Copycat’s life.

Slayback came back in 1995. He allied with a small cabal who had come up with a plan to use the Weapon X healing factor  in a cure for the deadly Legacy Virus. Such a drug was worth a fortune. Slayback insisted that the first subject to be captured should be Deadpool. He got his wish and they managed to locate and nab Deadpool.

They then moved on to another subject Maverick. Maverick did not have the full healing factor, being just blessed with the anti-aging sequence. But had the “advantage” of being infected with the Legacy Virus. Slayback was less enthusiastic about grabbing Maverick, who got away. Slayback consoled himself by torturing Deadpool.

The best there is at what he does

Hearing about Deadpool’s disappearance, Maverick deduced what was going on. He enlisted the help of another Weapon X vet, Wolverine, to rescue Deadpool. Using Maverick’s extensive connections, they located and assaulted the prison lab, freeing Deadpool but clashing with Slayback.

Slayback was surprised by Wolverine’s ferocity. He nevertheless started getting the upper hand until Maverick nailed him from behind with copious gunfire. This stunned Slayback long enough for him to be caught in the self-destruction of the lab.

Though Slayback has not been seen since, it is highly improbable he was actually slain by the blast.

Slayback is a savage, manic killer. He has lost everything and is consumed by hatred toward Deadpool — and he was a bloodthirsty psychopath even before *that*.

He speaks with a British accent and diction — and occasionally overdoes it for humour value. His speech is usually composed of death threats.

“ I never had a problem with you, Garrison, so don’t give me cause to have one now. It has taken me almost ten years to return from the dead. And having returned, I find I only want one thing out of this new life I have been granted… I want to see Deadpool DEAD !! And I want to make sure it is SLAYBACK who KILLS him !”

“Shhshs. Not a peep Vanessa, m’dear girl. Looks like the last peg has come to fit in the round hole.”

“Scared of me just a wee bit, aren’tcha, lad ? That’s good, Wadie — y’should be. Y’should be properly scared of any man who comes back ten years after he died, ten times angrier, for one reason and one reason only — to rip you apart PIECE by bloody PIECE !”

Bonuses and Limitations:
Martial Artist is Contingent on Stretching.

Drawbacks:
Serious Rage, CIA toward making Deadpool suffer, Distinct Appearance, MPR (can be affected by whatever works on organic circuitry). 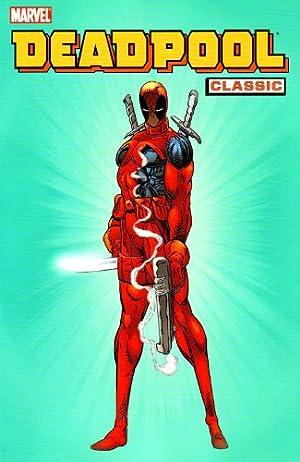 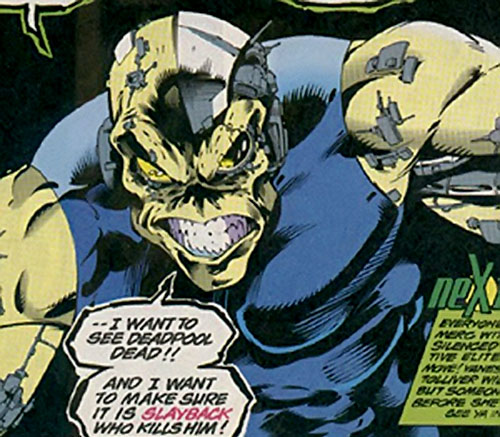