Trained in differing styles of unarmed and armed combat from around the world, including Japan and the Middle East, the Slaymaster is a highly proficient assassin.

After his apparent death, he traveled, discovering a more dangerous self. He acquired abilities that verged on super-enhanced, including his ability to discover an opponent’s weaknesses. He even used special techniques to harden his left hand with thick callus, which he then ground to a deadly point (in DC Heroes RPG terms, Claws).

Furthermore, he now could take several blows delivered with superhuman strength without too much damage (Martial Artist (RV) and LDD).

He toned the weaponry from campy to deadly, although still very much high-tech. He used a weapon gauntlet, a handgun, and his most dangerous weapon, the jazzlers. This can be used like a knife, for stabbing, or they can affect the nervous system, restricting any action.

His amplifier suit turned his already highly developed skills and abilities into those of superhuman proportions.

Surviving the pack of shark in which he was thrown while fighting Captain Britain, Slaymaster traveled the globe, training himself better than before. It is probably during this period he converted to Islam, while in the Middle East.

At one point he used an old ninja trick to shape his hand into a deadly cutting weapon.

Upon returning from his training, Slaymaster ended up working for the Vixen. This crimelord had infiltrated and taken over STRIKE, the British equivalent to SHIELD. She employed him to hunt down the STRIKE psi-division, who were the only ones to realize that STRIKE had been taken over.

Unknown to the Slaymaster, Betsy Braddock, the sister of Brian Braddock, Captain Britain, was a member of the psi-division. Slaymaster was killing off the group one by one, when Betsy (who could telepathically sense the deaths) phoned her brother for help.

Captain Britain answered his sister’s call and arrived in London, just as Slaymaster found the remaining telepaths. In the battle that followed, Slaymaster demonstrated his new skill and abilities. He would very likely have killed Captain Britain had Betsy and her lover, Tom Lennox, not intervened. Slaymaster was beaten and arrested, perhaps for the first time.

Slaymaster escaped the authorities during the Jaspers warp that turned the UK into a living nightmare. He then plotted to capture Captain Britain and hand him over to the Vixen. Disguised with a weird caterpillar mask, and told the highly gullible Crazy Gang that the was “a criminal leader of extreme genius”. Thus, they agreed to work with him.

The buffoonish but dangerous Gang was used to perform a large number of random thefts, attracting Captain Britain. The Gang mobbed the Captain under Slaymaster’s directions. This allowed the assassin to throw five jazzlers into his enemy, taking him out. Rolling him into a heavy carpet, Slaymaster abandoned the Crazy Gang, took a taxi and delivered his victim to the Vixen.

Slaymaster had a deal with Vixen. As his pay, he would get Cap’s costume. But Vixen then double crossed Slaymaster, refusing to give him the suit. Slaymaster took out the men who were supposed to eliminate him, and stole the suit for himself.

Upon donning the garb, Slaymaster eventually discovered the suit was more than just an amplifier. It was controlled by Brian Braddock. Braddock had the suit suddenly fly into a wall, stunning Slaymaster. Minutes later the base was destroyed by flooding.

The none-too-sane Vixen had nevertheless ordered her scientists to design a prototype costume. It was similar to Captain Britain’s, but designed for use with the Slaymaster.

At this time Betsy Braddock assumed the role of Captain Britain after her brother had quit, and was thwarted several of the Vixen’s criminal schemes. Vixen sent the Slaymaster to kill her, using the amplifier suit. He almost succeeded, blinding Ms. Braddock in the battle.

Later appearances, he was dressed in a plain yellow jumpsuit. It was reminiscent of S.H.I.E.L.D. uniforms, but brighter, adorned with all his weaponry.

He has worn various disguises over the years, including an Uncle Fester  style disguise and dressed as a caterpillar for the Crazy Gang. His amplifier suit was just a black body suit with a large green helmet.

Cold, calm, collected. The perfect trained killer. He lets nothing get in his way, and kills without mercy.

Unlike other assassins, he does like to keep a low profile. Thus, he generally will disguise himself while making kills. Slaymaster will only reveal himself when his plans are ready, or against a worthwhile foe.

He has a strong code of honour, but not so strong it would ever interfere with his mission. He appears to be Muslim, but aside from abstaining of alcohol and presumably pork, never raises this issue. He also mentions Buddhist beliefs in reincarnation. Thus, I’d imagine he believes in a personal syncretism assembled during his travels.

The Slaymaster’s main weakness is that he talks too much. He’s also too big on exquisite and cruel vengeance against his hated foe Captain Britain.

He also has a form of twisted honour and respect for his worthy foes.

“The voice, the simple-minded arrogance. You are Captain Britain, aren’t you ? Oh, but surely the prophet smiles upon me… Ha ha ha. This is priceless.”

“The [weapon] between your fourth and fifth ribs at the moment bears the regrettably tasteless name of a ‘jazzler’. It disrupts nerve impulses. I imagine you find it difficult to stand, think, walk, or indeed fulfil any physical functions other than screaming. Luckily, I am not similarly affected.” (punches Captain Britain)

“The pain surprises you captain ? You are alarmed at how easily I could breach your force field, leaving that point unprotected. Then you are not aware of what I have done to my arm ? It is a ninja trick. You know of the ninjas, of course ?”

“Perhaps you will be a warrior in your next incarnation and we shall meet again. I hope so. I’ve rather enjoyed this.”

“Please believe me when I say that it was never my intention to see you thus humiliated.”

Slaymaster burst onto the scene during a crime spree to steal several artefacts from the US. The job was to return them to a nefarious art dealer in the UK.

This brought him into conflict with Green Arrow and Green Lantern. After several skirmishes, Lantern destroyed his giant robots, while Green Arrow defeated him in combat.

Slaymaster promptly escaped from prison. He travelled, enhancing his skills. He was then employed by a criminal organization in Metropolis, who had ordered an assassination of Booster Gold.

Slaymaster then proceeded to hunt his foe. Joining a group called the Royal Flush Gang, Slaymaster attacked the JLI headquarters as Booster applied for membership. However, the whole team to be beaten by Booster Gold on his own. The contract was withdrawn, but Slaymaster, determined to finish the hit, vowed to carry it on.

Booster Gold had just returned from Minnesota with his seriously injured sister, after they had defeated an extra dimensional alien invasion. Slaymaster fought Gold Star, and left Booster’s sister dead. Booster caught up with Slaymaster, but could bring himself to take his life, and Slaymaster was arrested.

Escaping from prison once again, Slaymaster joined up with a drug cartel, and caught and tortured Black Canary with them. Green Arrow found Slaymaster, and in a vicious battle, killed him.

Bonuses and Limitations:
Claws is Form Function (and only valid for the left hand) and Weakness Detection is a Skilled Power.

Drawbacks:
MPR (No Fine Manipulation in his left hand). 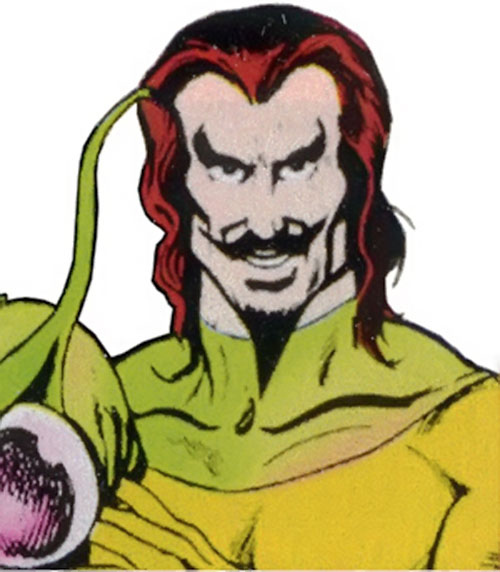 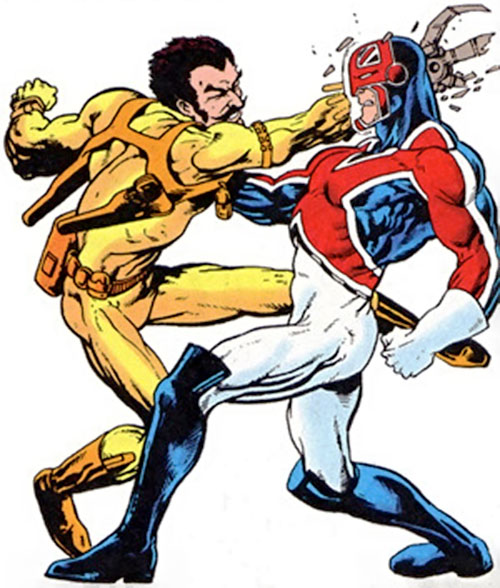 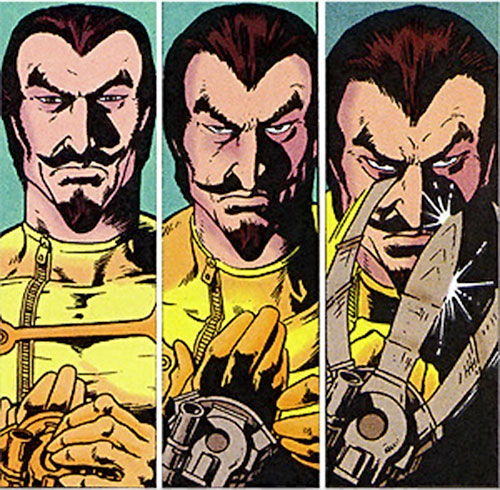