McKenzie is a rough grrl, who possesses formidable superhuman strength when asleep. While sleepwalking, she has been witnessed casually ripping off extremely thick bank vault doors, or taking Robotman apart with a few punches and kicks. She can also perform superhuman jumps in a vaguely Matrix-like style.

To stay sharp and asleep, she has a walkman cassette player where she pops Barry Manilow  tapes. She presumably switched to an iPod some years later. And, of course, takes a few sleeping pills before going into action.

Sleepwalker has preternaturally sensitive dreams, very much like the Awareness power. Before the Brotherhood of dada launched the Painting That Ate Paris operation, she kept having dreams about the Fifth Horseman of the Apocalypse, a terribly powerful entity that had been trapped in the Painting. The Horseman came free a few hours after the Brotherhood “activated” the Painting.

McKenzie is a young British woman who was recruited by Mister Nobody, the illuminated surrealist activist and madman. She thus joined the first Brotherhood of dada.

The Brotherhood had a plan – to recover a weird painting evoked in lost works by Thomas DeQuincey, a work of art that supposedly ate people. This tableau, by the mad Italian painter Piranesi, had been destroyed in 1814. But a duplicate had been done, which was ultimately recovered by Horst Eismann, the collector of the strange.

The Doom Patrol intervened and broke the phenomenon, restoring Paris. But much of the Brotherhood of dada, including Sleepwalker, elected to stay in the Painting. Therein was a dimension  themed after art schools. The freaks, forever rejected on Earth, had found a world that could accept them and which they could enjoy.

Sleepwalker has not been seen since. She likely still lives within the Painting.

Yes, those are actually miniature beds on her shoulders – probably the coolest 1990s comics shoulderpads. One assumes that she tucks them before going into action.

While “powered up” Holly is quite obviously a sleepwalker. Her head sways to the side, her step is slightly shambling and her breathing deep and regular. Most opponents have a hard time determining whether she is a threat before she starts stompin’ and punchin’.

Your basic kev, aggressive and ignorant. On the other hand, she has a genuine appreciation for the arts and the creative process.

Of course, most encounters with Sleepwalker will happen while she’s asleep. Which reduces her personality somewhat.

“So what’s this DeQuincey bloke gotta do with us, then ?”

Drawbacks:
Power Loss (while awake all Physical Attributes and Resistance Attributes become a 03, all Powers drop to 00), Misc.: Asleep (see below).

Asleep at the wheel

Though Holly’s power is absurd, she also acts with purpose and precision while asleep. She can follow broad orders and have some initiative. “Find and kick Robotman’s butt” or “follow the plan that was explained to you before you slept” didn’t pose any problems.

Sleepwalker, while asleep, can be considered as an awake person following broad post-hypnotic orders.

Still, being asleep on the job presents two limitations :

By Sébastien Andrivet based on Mayfair. 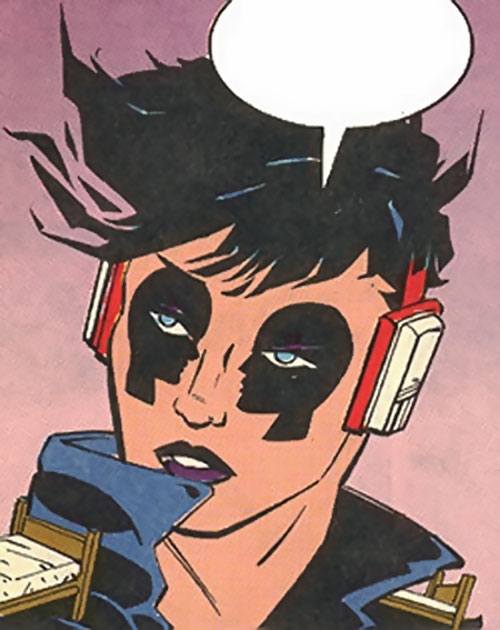