Slingshot has the superhuman ability to defy gravity, and fly under her own power. The top speed and altitude she can achieve unaided is unknown, but she’s adept at using her power in a fight.

Although she did not inherit her father’s superhuman strength, she is able to generate enough thrust to carry another person in flight.

The Aquarium’s resources include equipment with which Warner can monitor the police radio for watch words that trigger an alert to the team of a possible emergency.It also allows her to summon, monitor, and communicate with members of the team during engagements with hostile forces.

The team also uses a teleportation device called the Jump Station. It allows them to travel instantly across the continent to meet with one another. The team can activate the Jump Station by manipulating a device on their costumes.

The Jump Station can only transport persons from the station itself to another location and back, but not effect transportation directly between two other locations.

Olivia “Livvie” Lewis was an over-achieving junior at the prestigious Georgetown University when she was first approached by Maddie Warner. In spite of her incredibly busy schedule, with her volunteer work across campus, writing for the Hoya (the university paper) and the boyfriend she spent little time with, she still took the time to listen to the story of Captain Dynamo’s widow.

Maddie Warner explained to Livvie that her biological father was actually Captain Dynamo. She added that Olivia had several other half siblings spread out across North America. With some coaxing, Livvie accompanied Warner back to her secret headquarters, underneath the harbour of Tower City. There, she met her new found siblings.

While the five youths discussed their new found shared heritage, Warner secretly exposed them to the same radiation that gave Captain Dynamo his superhuman powers 40 years earlier. The radiation unlocked the siblings’ powers. Each inherited a single ability from their father. Livvie’s was the gift of flight.

Maddie explained to the siblings that Captain Dynamo’s death left a void in Tower City. As a result, superhuman crime ran rampant. Warner intended for the five siblings to replace Captain Dynamo, and one and all agreed. This lead to the birth of the Dynamo Five. 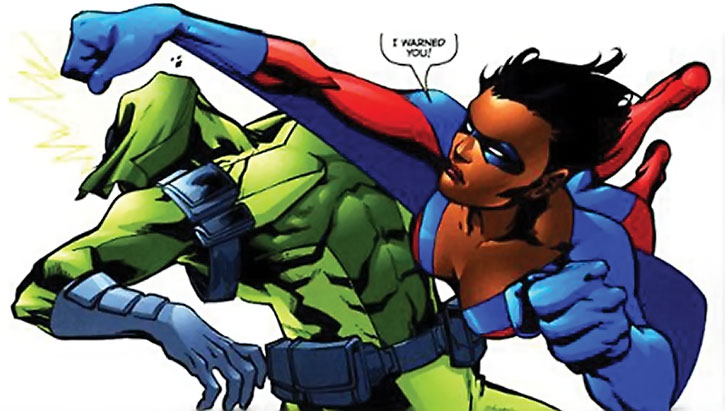 Livvie took the codename of Slingshot. Being the most mature also made her the defacto leader. During the course of their adventures, Olivia allowed herself to be observed using her gifts while in her civilian identity. This resulted in her adopted father, Neil Lewis, being kidnapped. Neil was kidnapped by the former employers of an assassin named Lionel Barstow.

These employers blackmailed her into freeing Barstow. But after she and her siblings did so, Barstow killed his ex-employers with his “death touch”. Barstow explained that after he was captured, his attorney, Neil Lewis, advised him to testify against his employers.

The rest of the Dynamo Five were outraged at learning that they freed a murderer. But Slingshot was more concerned with getting her father to safety than returning Barstow to the authorities. Barstow escaped, leading to Livvie’s siblings losing some faith and respect for her. 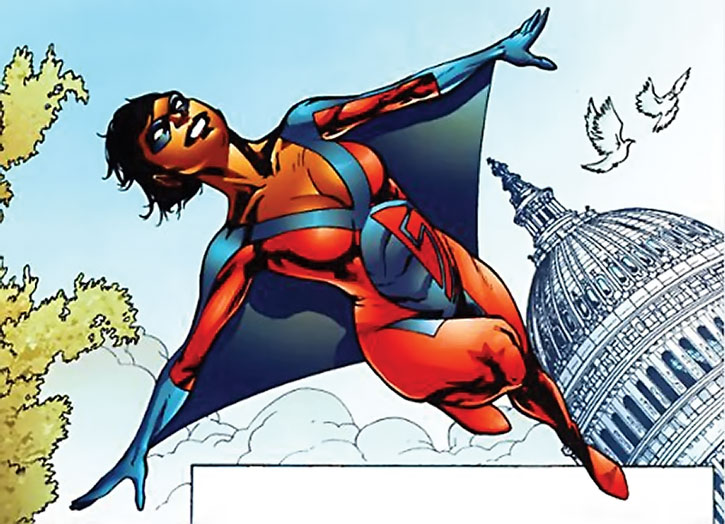 Neil Lewis was profoundly disturbed to discover his daughter’s secret when she rescued him. He also was pained to learn that Livvie’s mother cheated on him with Captain Dynamo.

Livvie sympathized with him, but reassured him that because of Captain Dynamo’s shapeshifting ability, it was entirely possible that he impersonated Neil himself when he fathered Livvie, and that Livvie’s mother may not have consciously known that she was having an affair.

Nearly a year after the team was formed, the group was attacked in the Aquarium by a combined force of past enemies. During the battle, Olivia’s brother Spencer is rendered unconscious. This accidentally reveals his inhuman nature, much to the shock of his siblings.

The group reacted badly, expressing feelings of betrayal due to Spencer having kept his alien nature a secret. In turn, Spencer saw this as hypocrisy, and like all families the siblings have a blow out fight. The fight combined with the stress of the battle, and Maddie’s coma, caused enough stress to split the group up.

During this time, Slingshot tracks down the assassin Barstow in a country outside of the United States. After a brief struggle, she returns him to the authorities. Upon his return to prison, Olivia returned to her normal life, not caring that her sister Bridget had created a new Dynamo Five to protect Tower city.

Unfortunately, the new Dynamo Five eventually drew the ire of a combined force of villains that they had faced in the past. The new team was quickly decimated and Bridget faced certain death. But sensing her need, her brother Gage quickly re-assembled their siblings who raced to her aid.

With the original team reunited, the Dynamo Five made quick work of the combined force of villains.

Olivia is a trim and attractive black woman with the typical comic book heroine figure. She wears her hair cropped close, and dresses practically when not in costume.

As Slingshot, her costume is a one piece leotard, with blue wings connecting her sleeves of her arms to the thighs of her legs. It is a blue and red number, with a low plunging neckline, generously exposing her ample cleavage, and has a blue domino mask to hide her face.

Slingshot is dedicated, earnest, and attentive. She is respectful and reserved towards Maddie Warner and other authority figures, usually addressing them as “Ma’am” or “Sir”. She avoids using profanity in their presence.

She’s the type of individual that always needs to be busy, and is driven to give back to the community. If she wasn’t a superhero, there is no doubt that Olivia would be finding an equally valid calling in her community.

“Gentlemen, we can do this the easy way, or the hard way.”

“I made one of the biggest mistakes of my life when I let you go. I wasn’t considering the consequences of my actions. And now because of me these soldiers, and god knows who else, are dead. Well that’s over now. I’m taking you back to America, back to F.L.A.G., where there’s still a warrant for your arrest.” 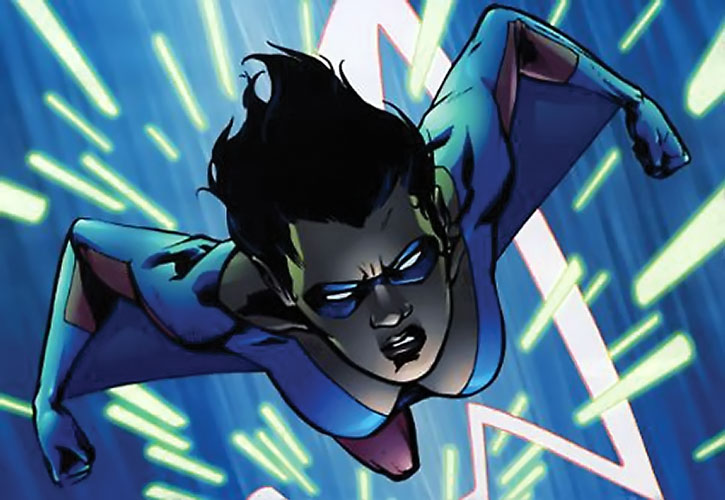 Slingshot: “This tatic of yours is pretty smart, you know ?”
Maddie: “What ’tactic‘ ?”
Slingshot: “Pretending to be a mean-old-you-know-what so the five of us form a bond… even if it’s against you.”
Maddie: “Olivia, I have no idea what you’re talking about.”
Slingshot: “Sure you don’t. ‘Night Mrs. Warner.”

Barstow: “Is it worth jepardizing your secret [identity] just to see me in jail ?”
Slingshot: “Yes.”

The Dynamo Five can be dropped wholesale into the DC universe as is. Tower City can be yet another fictional city within the DC USA.

More interestingly though, each of the siblings could have been the illegitimate offspring of a certain Martian in a less cordial campaign. 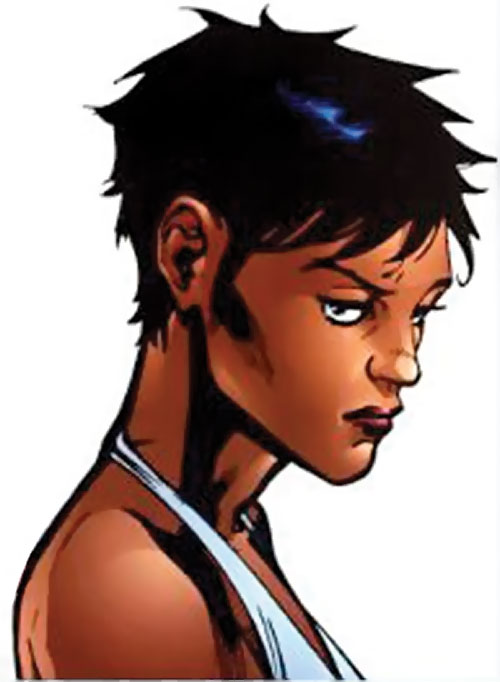