Sloth is superhumanly strong and tough. He is a “Class 100” character, able to hold his own against the likes of Hercules or Thor.

He also has an acute sense of smell, enabling him to track targets by scent alone.

Sloth is a native of an alternative reality. He was a member of that world’s Avengers, before it fell victim to its Sersi’s madness.

He was rescued by Proctor, whose reality had been a victim of his Sersi. Proctor recruited Sloth into his Gatherers. This team’s goal was to hunt down and stop the Sersi’s of other dimensions before they did the same to their worlds.

Some travellers to alternate realities have trouble physically adapting to a dimension where a version of them already exists. This leaves the newcoming version disoriented and weakened. Proctor discovered the “Gathering” ritual as a way around this. It involves locating the traveller’s counterpart and killing them.

On another Gathering trip, they Gatherers recovered the Coal Tiger. He was grievously wounded when they found him, and needed Gathering quickly to have a chance of surviving in the new dimension. Sensing that his counterpart was also an Avenger in this dimension, Proctor sent the Gatherers to Avengers mansion to access their computers.

The Gatherers had already infiltrated the Avengers mansion twice, undetected. But the Avengers had detected anomalies, and were prepared for them on this occasion. They fought briefly, but Cassandra managed to subdue the Avengers. The Gatherers thus escaped with the information about their new member’s counterpart, the Black Panther.

They travelled to Wakanda, only to discover that the Avengers had warned T’Challa about them. As they attacked him, some of the recovered Avengers arrived to help T’Challa, transported by Lockjaw. While the battle raged, the Black Panther was subdued by the Gatherers, and Cassandra attempted to Gather him.

However, the ritual was disrupted by the Coal Tiger, who refused to let another die in his place. He soon died, and the Gatherers fled. But the Swordsman was captured before he could get away.

Concerned for his well-being, Magdalene begged Proctor to let them rescue him. Proctor sent them to Gather the Vision from Swordsman’s dimension, whom he said he would send to rescue the Swordsman. When they returned with him, Proctor released Tabula, whom he sent with the other Gatherers to capture Earth-616 ’s Vision. 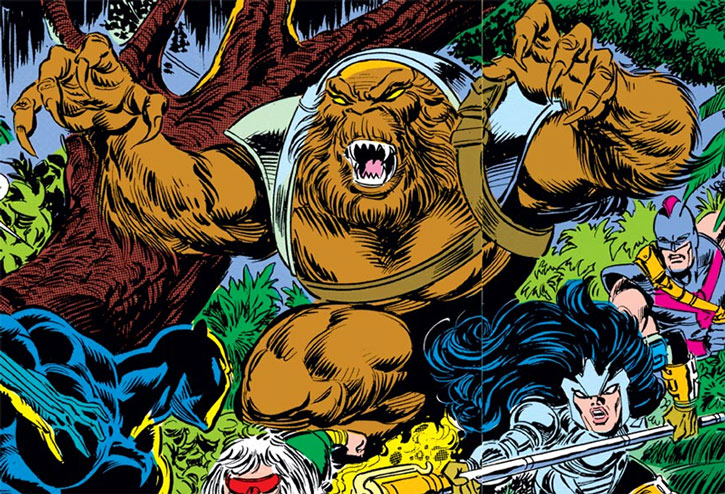 After swapping the minds of the two Visions, he sent his Vision to infiltrate the Avengers. The syntesoid  was also given secret orders to execute the Swordsman, keeping the other Vision captive.

When the Gatherers Vision failed in his attempt to kill the Swordsman, he was captured. That led the Avengers to Proctors citadel in the Andes. The Avengers stormed the citadel and battled the Gatherers, freeing their Vision.

Deciding he had done enough damage for the moment, Proctor activated the self-destruct mechanisms of his citadel. He teleported himself and Ute away, abandoning Sloth and the other Gatherers to the citadel’s destruction. It is unrevealed whom survived.

Sloth is protective of his team mates, particularly Cassandra, and is intensely loyal to them.

He is happy to take the lead in combat, and enjoys fighting with enemies who can provide a physical challenge.

“This beastie put up quite a fight, but I knocked the wind out o’ his sails in the end.”

The Gathering would probably work better in the DC Universe, where it’s already established that travellers in Hypertime  cannot survive on a world where a counterpart of them already exists.

Bonuses and Limitations:
Growth is always on, and is already factored in (-1). 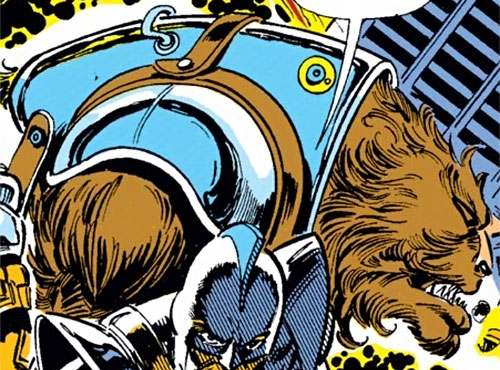 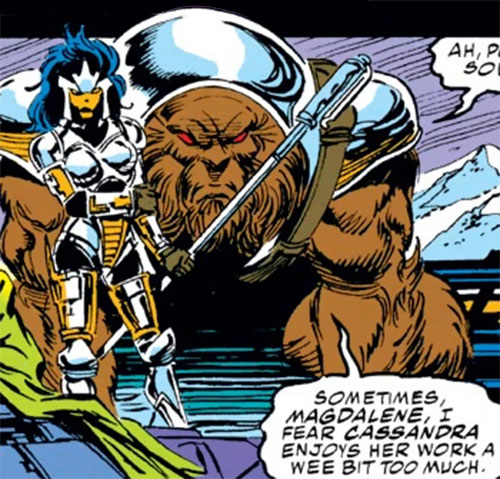