Vibrating men are the best kind

The punches of Smasher had… odd properties. In DC Heroes RPG terms, we’ll use the Vibe Power to model them. 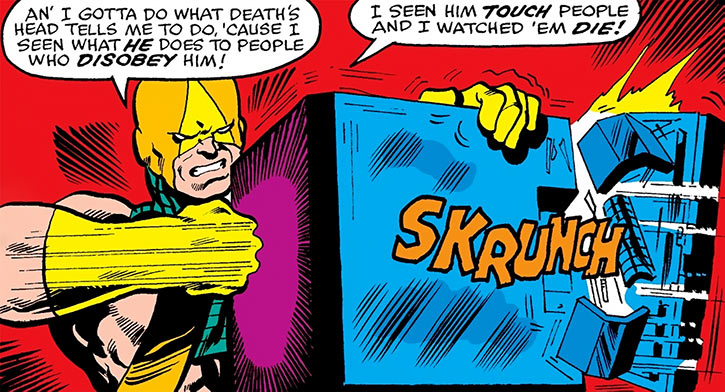 Here are two examples of what he did :

It may just have been a slightly unusual depiction of super-strength. But let’s play it safe. Plus, the Smasher delivered both “vibration” strikes and “normal” superhuman blows.

The Smasher seems to be a professional thug hailing from Los Angeles. He once seemingly worked for Death’s Head (Paxton Page). What he did not realise was that “Death’s Head” was actually a disguised Death-Stalker (Philip Sterling).

The faux Death’s Head sent Smasher to the Los Angeles Science Institute to steal scientific equipment. Smasher busted his way in, and punched the intervening Daredevil out. He then brought back the loot and Daredevil to “Death’s Head”.

After Daredevil and the Ghost Rider (Johnny Blaze) clashed with “Death’s Head”, Smasher was sent to kidnap Karen Page. As a result, he again clashed with Daredevil.

As “Death’s Head” melodramatically took off his glove to expose his cybernetic deathgrip, Daredevil performed a sacrifice throw and flipped Smasher into “Death’s Head”. Annoyed, Death-Stalker brushed Smasher aside with his death touch, apparently killing him on the spot.

Overconfident, dumb-as-bag-of-decks brute. He had to talk to himself, loudly, to make sure he didn’t forget something in a plan involving going into a room, opening a safe and taking a box marked “private” from it.

Smasher was quite afraid of his boss. He had seen him kill people with a touch.

“I wuz told to watch out fer you by Death’s Head ! But I don’t know why ! The way I see things, yer gonna be a pushover ! ‘Cause the Smasher’s gonna pulverize ya right into the ground !”

“Bah ! I beat you inta the ground the last time we fought, an’ I’ll do it again ! The Smasher can smash anyone !” 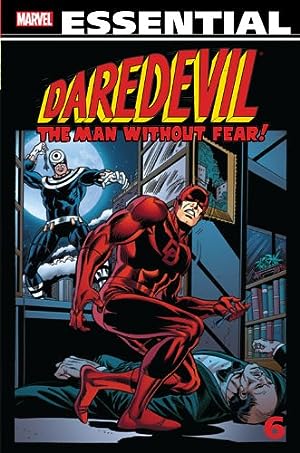 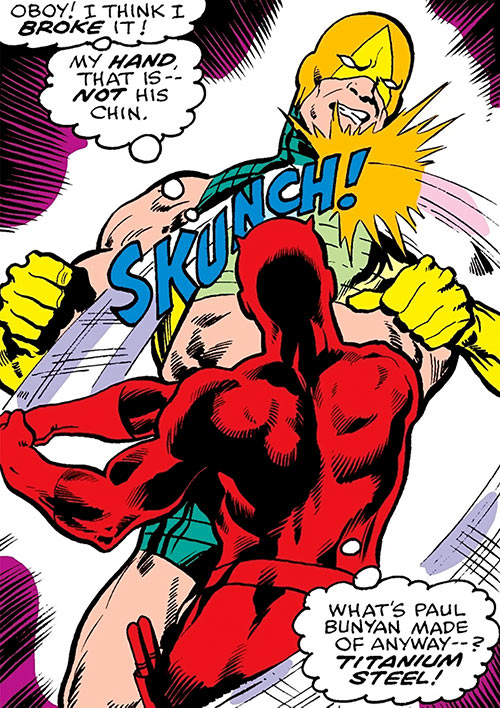