Smax used to be a professional, fully-authorised dragonslayer with a nearly unbroken string of victories. He’s now an experienced police officer, although he has neither the skill nor the potential to make detective.

As a demi-ogre he’s also huge, supernaturally strong and nearly invulnerable. Another demi-ogre power is projecting a blue-white punch beam from his solar plexus, which is considerably more powerful than even his fists.

Jaafs son of Mack isn’t. He’s actually a demi-ogre, born from the rape of a heroic-fantasy adventuress by a monstrous ogre. The woman, whose name is unknown, only survived due to being enchanted with a strength potion. She eventually died giving birth to a pair of huge offsprings – Jaafs and his sister Rexa.

Both eventually escaped when Jaafs killed the ogre. They went on to be adopted by a family of dwarves.

Jaafs Macksun became an authorized dragonslayer, ridding kingdoms of dragons against 30% of the hoard. And, usually, the gratitude of any maidens involved.

One day, however, he ran into a “dragon” bigger than himself. It was the impossible creature named Morningbright. After his defeat and the death of a nine-years old girl, Macksun decided to leave his realitye.

He ended up a police officer at the Top Ten precinct in Neopolis. Since the death of his partner Stochastic Fats, he’s been partnered with Toybox.

Smax is dumb, knows it and isn’t very happy with it. Since he has trouble handling all this people and social stuff which is over his head, he prefers to grunt or be rather curt. He acts like an asocial bruiser.

He’s not really asocial, but can’t see the world from a different point of view. When he tries to relate to somebody unlike him he always come off as terribly clumsy and insensitive. Thus he prefers to be alone and keep others at arm’s length.

He likes being a cop. Since when things get complicated and thinks he’s going to foul up he can just request orders or follow procedure. Plus, he likes being known as a super-tough cop with a bad mood nobody wants to get on the bad side of.

He has a dog-like loyalty to his few friends and his colleagues. Smax can be terribly affected if they are hurt or die. He of course tries to hide it, since he’s immature enough to think it’d look stupid. Basically he wants to be left alone, but feels lonely when he is.

Smax is really, really embarrassed by his home reality. He does his best to have nobody know about it. Macksun gets angry and very dismissive when faced with generic fantasy tropes reminding him of his homeland. Don’t mention dragons and singing magical swords or he’ll get even grumpier than usual.

Likewise he’d prefer not to explain enough about his own history and lifestyle. For all intend and purpose, he’s so ashamed it’s a Dark Secret.

“I just don’t hold with that stuff. Wizards, dragons, dwarves. They make me sick.”

(To Odin and Loki) “I’ve had enough of it. Listen pops, you end the universe and I’m running you *both* in !”

(Robyn to Smax) “Jeff, I’m fond of you like I’d be fond of some big, irritating dog I didn’t really want. And I’d never suspect you of doing anything emotional.”

Jeff would presumably be from a provincial corner of Myrra. That’s the dimension  where the not-so-famous adventures of the Nightmaster occurred.

Drawbacks:
Creepy appearance (huge and well-known as a badass), Dark Secret (feels his home dimension and background are horribly embarrassing), Socially Inept. He had Guilt between his first and second confrontation with Morningbright.

Like most Top Ten characters, Smax is pretty hard to gauge due to lack of comparison points.

Smax tends to put his HPs in his “strong light” (Energy blast) or the rare LDD. He lacks the imagination to use them for something else. 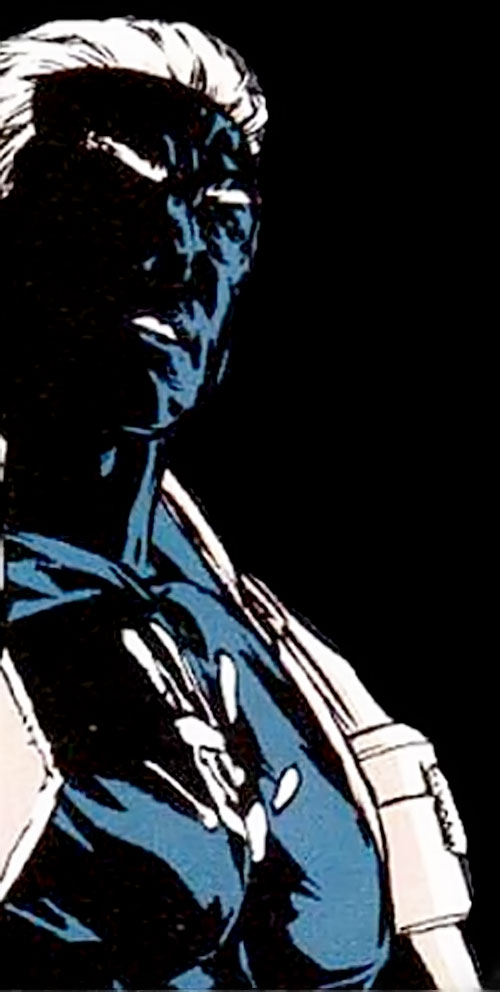