The Smiling Skull is a skilled assassin, pilot, marksman and military leader.

He apparently has ample funding – traditionally, that would involve stolen gold. During the 1960s he also ran significant military facilities, with dozens of soldiers and several jet fighters.

To Sarge Steel’s surprise, the Nazi’s fitness hadn’t dulled one whit in the 20 years since the war. Since it was never revealed what had happened to his face, it is possible that the Smiling Skull is some sort of failed super-soldier with an anagathic  factor. Perhaps these hypothetical enhancements had side effects on his appearance.

A further hint is that the Skull’s plan was a four-decades affair, also hinting at an extended lifespan.

During the 1940s, the Smiling Skull was trained in the Japanese martial arts by sensei from Imperial Japan. Thus, he became a proficient fighter using both soft and hard techniques. He could even be described as a minor master late in the war. However, he could not maintain this level postbellum.

Still, he’s a Japanese martial arts enthusiast. Which is a decent hook to make him a bit more distinctive and a bit less derivative.

The Smiling Skull has been known to tinker with technology. During one attempt on Sarge Steel’s life he used a drug that could make a large man go berserk (Catastrophic Rage) and use his full skills to kill whatever looked hostile. He then tinkered with the plumbing to have a shower spit scalding steam rather than hot water.

During the second World War, the Smiling Skull was an important spymaster of the Reich. He handled much of the shared espionage activities with Imperial Japan. Most of his activities are undocumented, but late in the war he clashed with Judomaster, who was investigating the communication routes of Japanese intelligence.

The US military had managed to get a probable location for the Smiling Skull’s hideout. It was hidden in a forest on the slopes of a mountain. They wanted to bomb it quickly before the elusive Skull would move away.

However, one of the Smiling Skull’s men had kidnapped a Japanese-American orphan accompanying Judomaster – the youth who would later become Tiger. Thus, Judomaster obtained a delay before the bombing to investigate the camp and free the kid.

Judomaster fell into a trap. But he verbally provoked the Smiling Skull – who decided to challenge him to a martial arts duel. Of course, there was a trick. Namely, a ring of men with searchlights all around the battle area, shining their powerful arc-lights into the eyes of Judomaster.

Judomaster nevertheless prevailed and knocked out the Smiling Skull. He escaped with the kid when the bombing started. 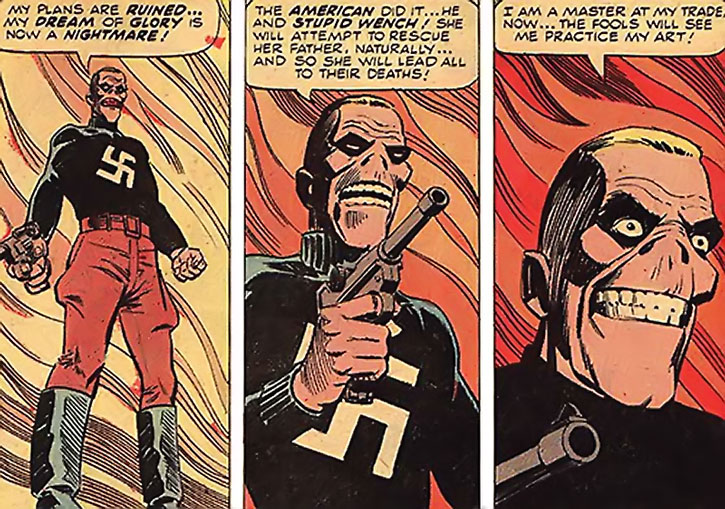 The Smiling Skull surfaced a short while later in Imperial Japan. He was taking part in a tournament to find somebody who could defeat Judomaster. Though the Smiling Skull had worked hard to get his rematch against Judomaster, he was among the contestants who fell to the agility of the Acrobat. Thus, the Acrobat became the champion sent against the hated Judomaster.

The Smiling Skull was generally thought to have died in the fall of the Axis powers. But he actually survived the war and fled after the fall of the Reich. He apparently took a lot of money with him, given what he later built.

No country for old men

After the war, the Smiling Skull fled to an undisclosed Southern Central American country – possibly Costa Rica. There, he established a fortified compound staffed by a new generation of Nazi troopers. The Skull gradually developed this estate into a full-fledged military base. It was complete with airstrips, fuel reserve, recent fighter-bombers and the like.

This base held prisoners. Originally, these were German researchers who worked for the Smiling Skull against their will for decades. Later on, it was their children. The Skull’s long-term objective was to have his scientific slave caste develop atomic bombs.

By 1965, his plans were nearing fruition. But as he became more active abroad, rumours of his survival spread. The Smiling Skull launched a strange plan to keep the heat off him. Since Sarge Steel owned the exact same Lüger as the Smiling Skull (down to the ballistics), the Nazi arranged for the various murders he had committed with his handgun to be traced back to Steel.

His plan then called for the capture of Sarge Steel. But of course, Steel escaped and ruined everything. Loose on the Nazi base, Steel set the fuel depots on fire, freed the prisoners and mounted a resistance against the Nazis until the local police could arrive and help mop up. Steel had a duel with the Skull, wounding him and leaving him to be arrested.

Presumably, American forces then came to secure the atomic bombs built by the captive German scientists.

The Smiling Skull was later mind-controlled into joining the elite cadre of assassins working for Mr. Ize, along with Sarge Steel and others. Like the rest, he fled in some confusion as soon as he retrieved his free will.

To my knowledge, the Smiling Skull was never seen again. Twenty years later, his world (by then designated as Earth-4) was engulfed by the Crisis on the Infinite Earths. Many inhabitants of Earth-4 were merged into the continuity of the New Earth that emerged from the Crisis. But whether there was a version of the Smiling Skull on New Earth is unrevealed.

One post-Crisis secondary source depicted him as a past adversary of Sarge Steel. So odds are good that the Smiling Skull spread his evil on New Earth in past decades.

“The next facetious remark might easily cost you an ear, Mr. Steel !”

“I am here to represent the Fatherland against your racially inferior champions.”

The Smiling Skull was a successor of the Red Skull in the 1960s, while Red Skull I was believed dead and Red Skull II (Albert Malik) was in jail in Algeria. His nemesis was the then CIA agent Nick Fury.

The Smiling Skull was finaly found and killed by the Scourge of the Underworld, who was secretly working for the real Red Skull.

Drawbacks:
MPR (Poor eyesight of an unspecified nature), Distinct Appearance, CIA toward bigotry, Attack vulnerability (Character Interaction will get a -2 CS OV/RV if they germanely insult or mock his face – for instance, to Persuade him to challenge somebody to a duel).

Late during the war, the Smiling Skull trains hard enough to reach a DEX of 06 *and* raise his Linked Skills by one.

This is the result of intensive training in the Japanese martial arts, and he becomes a superior judoka and karateka (or whichever it was that Japanese sensei agreed to teach to foreigners in the 1940s).But it’s not enough to threaten Judomaster in a fair fight, of course.

These heightened skills were not apparent in 1965, perhaps due to a lack of access to a proper sensei to continue his training.

Late during the war, the Smiling Skull trains hard enough to increase his Fighting score by 2, with the normal effects on offence and defence stats.

This raises his Averaged PL to 6.6. This is the result of intensive training in the Japanese martial arts, and he becomes a superior judoka and karateka (or whichever it was that Japanese sensei agreed to teach to foreigners in the 1940s). But it’s not enough to threaten Judomaster in a fair fight, of course.

These heightened skills were not apparent in 1965, perhaps due to a lack of access to a proper sensei to continue his training. 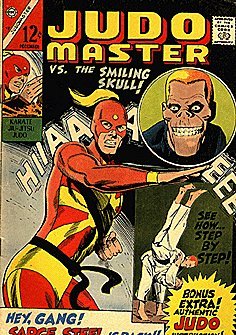 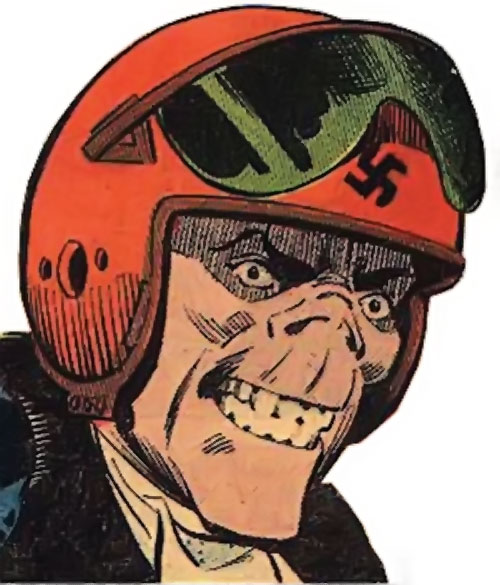 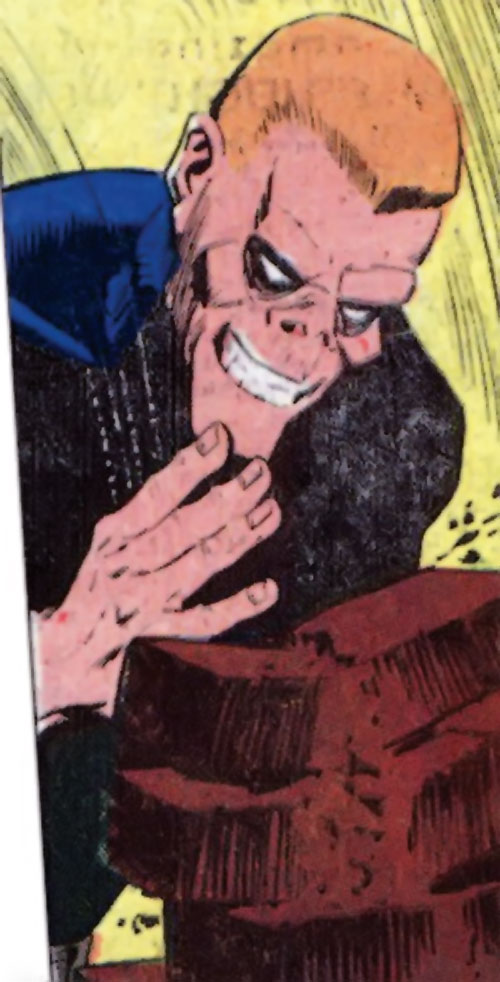 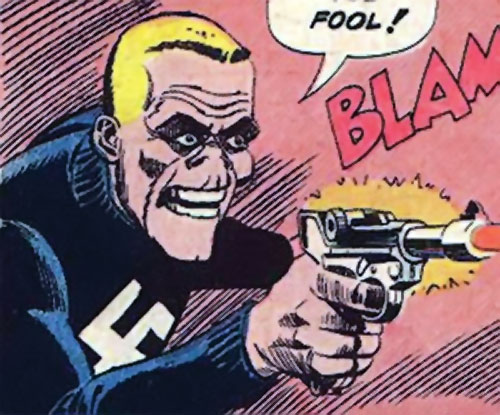