Smuggler wears a suit which enables him to open portals into the Darkforce  Dimension . This allows him to:

It also allowed him to escape death by travelling to the Darkforce Dimension, although he was unable to escape from there on his own.

When his family became shunned by their community for the super-criminal activities of his older brother Erik, Conrad ran away from home. It’s not known what he did, but eventually he was recruited into the government’s Redeemers program, as a way to redeem his family name after his brother had tarnished it.

He was outfitted with his powered suit, and given the name Smuggler, an old alias of Erik’s.

The Redeemers were sent to try to foil Henry Gyrich’s plot to take control of all superhumans using a nanite virus. They were caught by surprise, infected with the nanites, and thus forced to protect him from the Thunderbolts. They were freed from his control, only to discover that Gyrich himself had also been infected by similar nanites, and was acting under someone else’s control.

When the Thunderbolts were offered pardons, provided they stopped costumed activities, Jolt and Charcoal joined the Redeemers. The group took up residence in the Thunderbolts base in Mt. Charteris. Conrad didn’t really connect with any of his team mates, spending most of his spare time on his own, climbing in the nearby mountains.

Captain America temporarily replaced Citizen V, during which time the group travelled to Latveria. There they had to fight the Young Allies from Counter-Earth, who were threatening eco-terrorism against Doom’s homeland.

Soon after Citizen V returned to lead them, the Fixer accidentally releases the extremely dangerous Humus Sapien on the world. As soon as the Humus Sapien left Earth, the side of the mountain around their base was ripped off by Graviton. Disappointed at not finding the Thunderbolts, Graviton settles for taking it out on the Redeemers.

After he crushes Charcoal into dust, ripping Jolt’s electric body apart, he sent Meteorite to hurtling into orbit. Smuggler animated the shadows within Graviton’s throat, nearly suffocating him, but the villain moved them into orbit around the sun, where he’d have no shadows to work with. Smuggler appeared to die.

He had actually travelled to the Darkforce Dimension to save his life, but was unable to escape on his own. He was freed some months later, when Zemo used the brain-dead Blackout to return him to Earth. 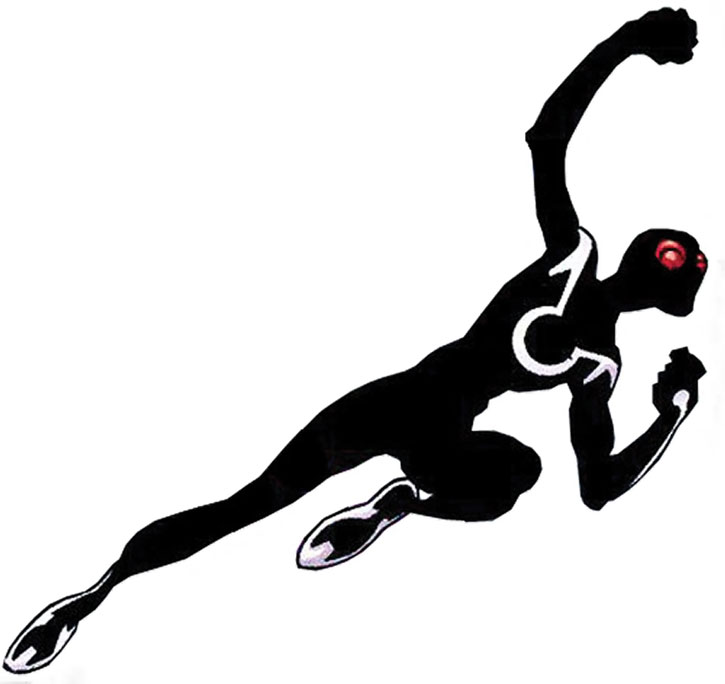 This served as a distraction to his brother Atlas, whose group of Thunderbolts was in conflict with Zemo’s. Zemo’s plan, to deal with potentially world-threatening Photon, worked. Smuggler joined the Thunderbolts, now under Zemo’s lead.

He continued serving with the group as Zemo transformed it into the Thunderbolt army during the Civil War. Then Josten was involved in Zemo’s final assault against the Grandmaster’s Squadron Sinister at the site of the last conduit of the Universal Wellspring.

During the conflict, the energies of the Wellspring were released, empowering ordinary people, and putting them under the Grandmaster’s control.

To seal the rift, Atlas grew larger than he had previously managed. He sealed the rift but was left comatose, and resistant to all attempts to shrink him. The energies released had destroyed the Smuggler suit, leaving Conrad powerless. Conrad Josten was last seen at his brother’s side.

Quiet and loyal, Smuggler tends to follow his team mates lead. But he has no hesitation to leaping to their defence, no matter how dangerous the situation. Outside of combat, he tends to stay to the background, not really mixing with anyone.

Conrad has mixed feelings about his brother. He hated him a long time for what he’d done to their family, but is confused by the new leaf he has turned over. He wants to forgive Erik, but doesn’t quite trust him enough.

“Y’know, I kind of like being controlled right now ! You made my lousy life even worse ! I want to just be pointed like a gun at all of you and fired !”

The Redeemers were a branch of Suicide Squad set up to take advantage of super-technology confiscated by the government. They located appropriate people, usually those somehow associated with supers, who were in trouble with the law, but who weren’t necessarily hardened criminals. Then they provided them with super-technology, allowing them to redeem themselves by working on missions.

The Smuggler costume was based on technology the government had copied from the Shadow Thief’s costume. Experiments by their scientists had discovered further abilities, but they were considered too unstable to entrust the suit to a reliable agent, preferring someone more expendable.

Source of Character: Marvel Comics (up to Thunderbolts #109). 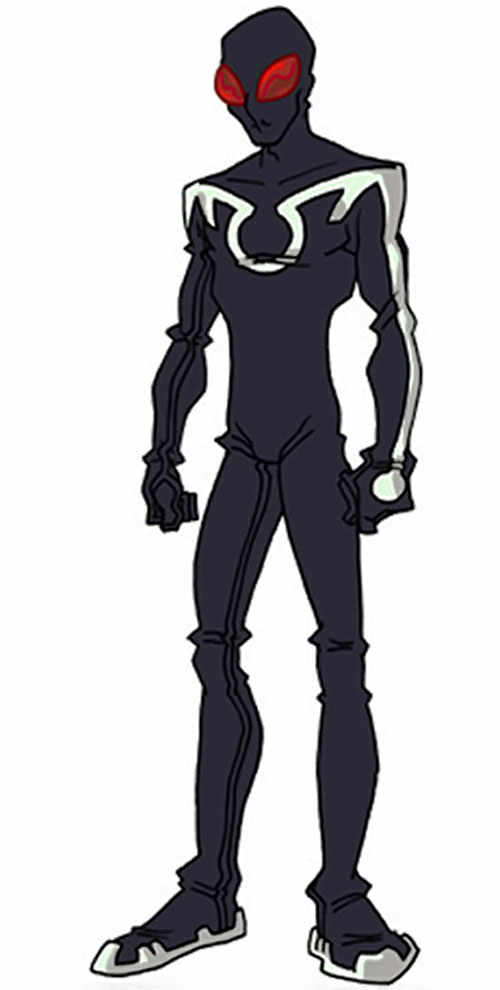 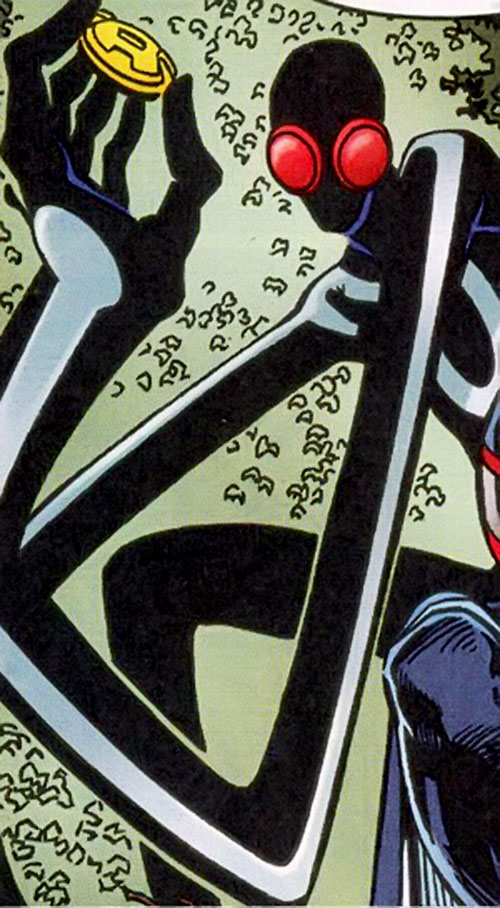 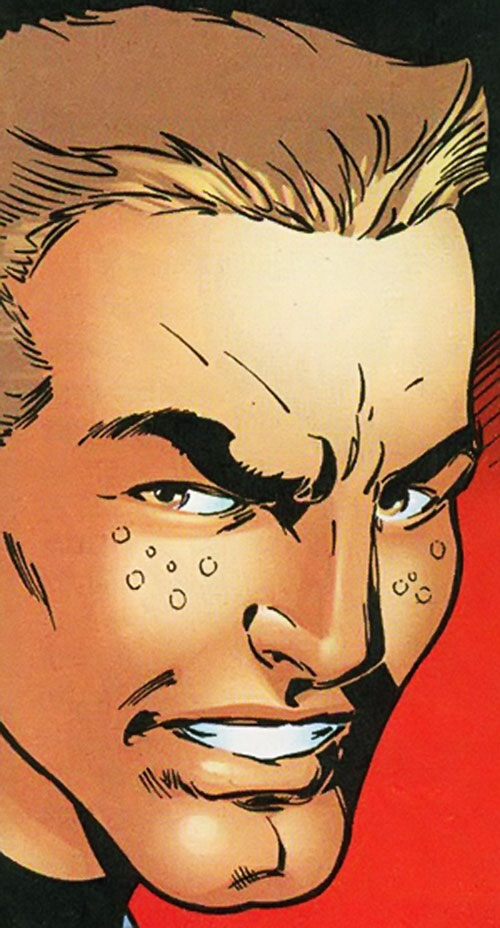