Marston is a professional contortionist. He also has startling reflexes and a strong killer instinct.

His suppleness and strength are his weapons – he’s very experienced at wrapping his pliable body around a person and crushing them. Using the unique leverage he can thus get, “Snake” Marston can easily break bones and kill someone. Though Marston often assumes that he can overcome persons with superhuman strength, this is not usually true – Spider-Man could pry him off without trouble.

He and Harrison trained to fight together. Their core tactic is for Marston to immobilise the target so that Harrison can pound on them. Their training is good enough that Harrison never hits Marston.

The supple enforcer “Snake” Marston was recruited by Baron Brimstone, a Satanist, techno-magician and would-be crime lord. Marston and another mercenary, “Hammer” Harrison, were dubbed the “Satan Squad” by their employer.

Brimstone and his Satan Squad conducted a successful campaign of high-tech thefts, hijacking and intimidation. But they were eventually stopped by the much more powerful Machine Man.

A few years later, Marston and Harrison were approached by the Arranger, a lieutenant of the Kingpin. The Arranger had them join the three Enforcers (Montana, the Ox and Fancy Dan) and christened this extended group “the New Enforcers”. The New Enforcers were sent to Brooklyn to aggressively develop extortion revenues.

The New Enforcers’s crime wave resulted in an encounter with Spider-Man (Peter Parker). Spidey was missing his spider-sense and was caught flat-footed several times during the fight, leading to his defeat. However, the New Enforcers were then beaten following the unexpected intervention of the Sandman.

What happened to “Snake” Marston next is unclear. He was replaced by the Eel (Edward Lavell) who disguised himself as Marston and rejoined the New Enforcers. It was generally assumed that Lavell had kidnapped and/or killed Marston so he could impersonate him.

Daredevil (Matt Murdock) exposed the subterfuge. The furious New Enforcers attacked the Eel to force him to tell them where Marston was. The Eel narrowly managed to fend them off, but was then taken down by Daredevil.

Marston survived Lavell’s plot. He resurfaced as part of the “Thunderbolts Army”, a fighting force in which numerous imprisoned criminals were forced to serve. When hundreds of thousands worldwide were accidentally empowered and made temporarily insane by the Wellspring, this “Army” was deployed in various large cities in an attempt to stop them.

These efforts yielded contrasted results. Furthermore, most of the criminals forced to serve managed to flee when the situation was brought under control.

“Snake” Marston hasn’t been seen since.

A ruthless killer with a strong hint of sadism.

“You’re through, Dawson ! Your miserable existence is about to end ! You didn’t think the Baron would let a non-entity like you interfere with his carefully laid plans !”

“Struggle all you like, Machine Man ! Not even your inhuman strength can break my grasp !”

“Oh, please… Andreas Strucker, of all people, serving‘ up platitudes ?” 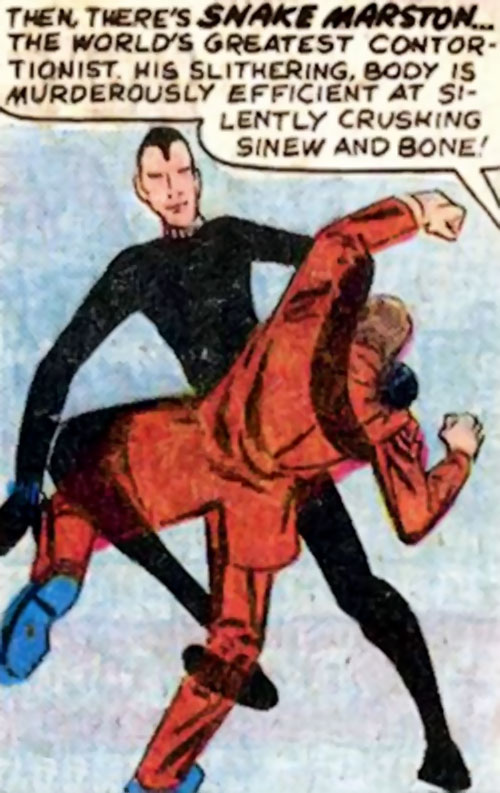