A location in the He-man and the Masters of the Universe animated TV show. Snake Mountain is the base of operations for Skeletor and his warriors. This article details:

For context, you can first read our He-man and the Masters of the Universe world primer and Skeletor’s character profile.

Mountainous fortress sculpted in the shape of a giant constricting snake. It reaches a height of at least a few hundred feet.

The exact location of Snake Mountain is never stated. But it is known by all the main players. Travel from the Royal Palace or Castle Grayskull takes little more than an hour in most vehicles.

Snake Mountain is the focal point of Skeletor’s domain.

A rocky wasteland surrounds Snake Mountain. There is a constant low hanging fog. The sky is an ominous red with frequent lightning strikes.

Rainbow Quartz. In all Eternia, a singular vein runs under Snake Mountain. Yet, Skeletor exports nothing. He takes.

Not really. Though called a mountain, this fortress doesn’t measure up.

Plenty. The terrain is rough and bleak. Dangerous (evil) creatures, like wolves, muck-monsters, and wolfbats can be encountered near the fortress.

While flying the Wind-Raider, Adam remarked the weather is always rough close to Snake-Mountain.

The Snake Mountain musical theme. To help set the mood while you read.

Politics are simple. There is a clear division between good and evil. Skeletor will always side with the evil peoples and fight against the good.

Dictatorship. Although each warrior gets a designated seat at his “council table”.

Skeletor is at the top. His warriors are given tasks like stand guard duty, retrieve a magical artifact, or kidnap the prince. When Skeletor is away, Evil-Lyn is usually a second in command. Still, all warriors have a loose reign.

Skeletor’s word is law. When he’s not concerned, it’s whoever can dominate the other.

Some of the warriors have dreamed of challenging Skeletor’s rule. Very little has come to fruition.

To Skeletor, everyone on Eternia is someone to be conquered. He and his warriors are seen by others as an ever-present enemy to be held in check. The Royal Palace and He-man are his greatest foes. 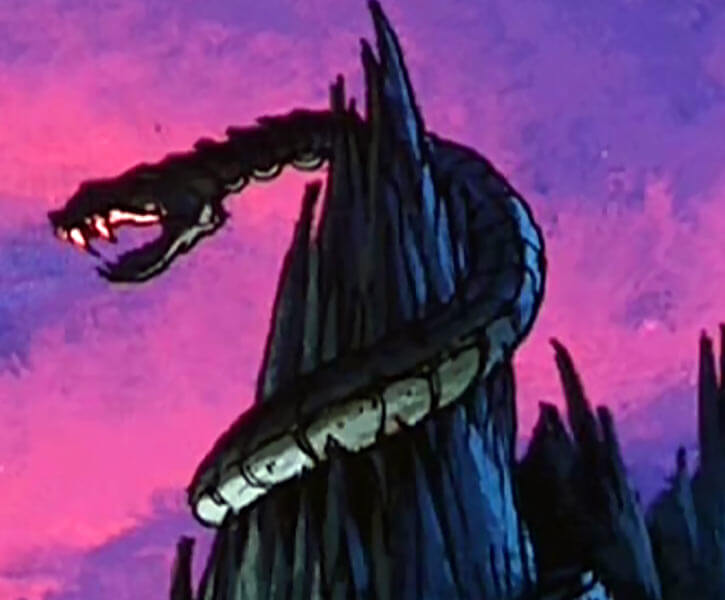 Snake Mountain’s wealth is most likely taken from wherever the evil warriors can capture it. Taking from others.

Centuries ago, Skeletor tricked Zanthor, the guardian of the disks of knowledge, into giving him the disks.

With these disks Skeletor learned much. Including how to build a secret base shaped like a coiled snake – Snake Mountain. 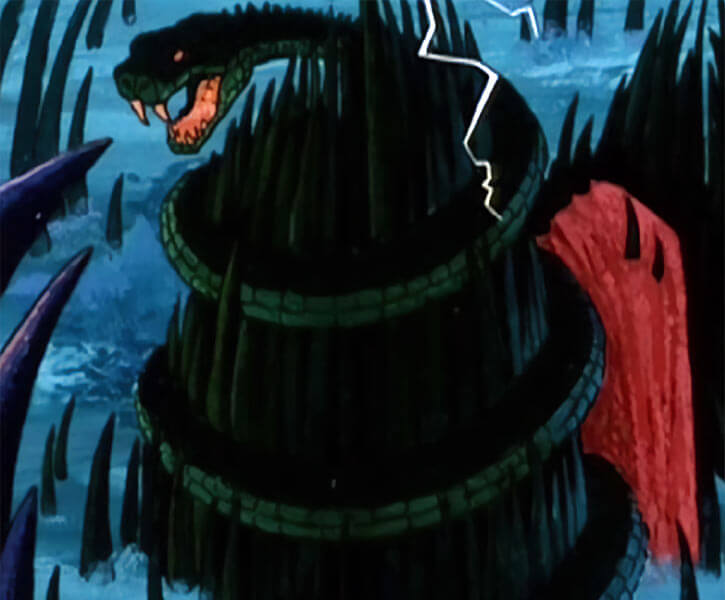 Sites of Interest within Snake Mountain

Many common entrance-ways have motion sensors to alert Skeletor of intruders. Furthermore, Snake Mountain has a great arsenal of artifacts, weapons, vehicles, and equipment in it. All are useable by Skeletor and his forces.

Snake-Mountain has a sophisticated artificial intelligence. It is able to report problems or intruders as they are occurring on its own.

The mouth of the snake

An opening, usually guarded by one of Skeletor’s warriors. A “Transport Beam” flashes from the mouth to teleport warriors to Snake Mountain. The mouth of Snake Mountain can close.

The throne is made of the bones of some creature. Skeletor may track changes in the area like detecting high concentrations of energy.

A secret entrance lies behind the falls, beside Snake-Mountain.

There are several medieval style dungeon cells with stone walls, thick wooden doors with a single barred window. But Skeletor also has cells generated as solid force field boxes. A very few of its cells are magic-proofed by Skeletor.

Under Snake Mountain, Skeletor keeps a gigantic snake who was perhaps a pet at some point. But years of neglect left the creature quite wild. This snake was the original reason Skeletor named the mountain, Snake-Mountain.

Skeletor maintains a menagerie of vicious beasts kept in cages as well as a few beasts he calls pets.

Sure. There are many snake themed villain groups. Snake Mountain would be a cool looking base for them. 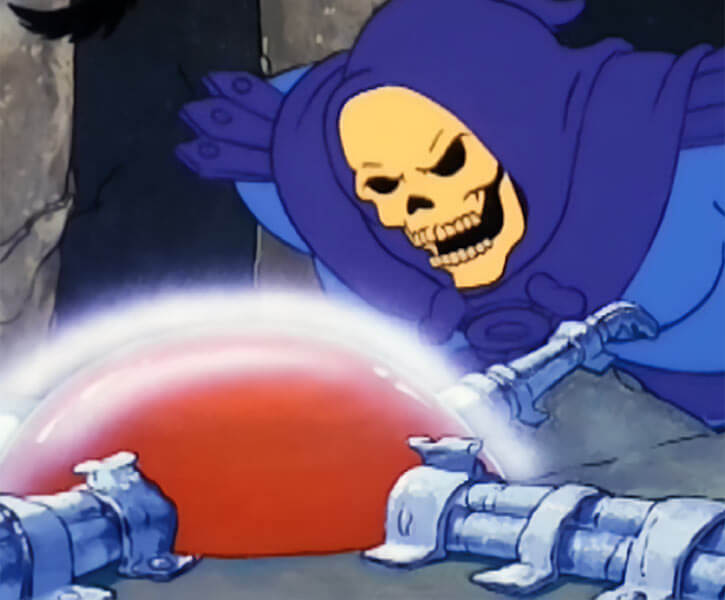 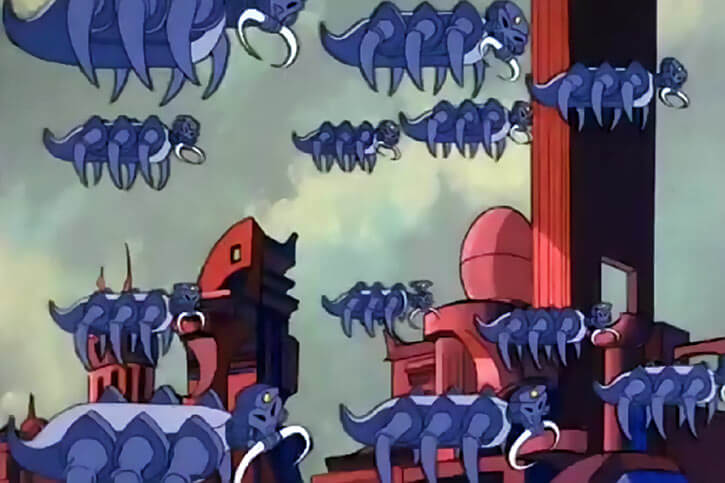 Skeletor had a contigent of ten of these flying robots when he took control of the Royal Palace. 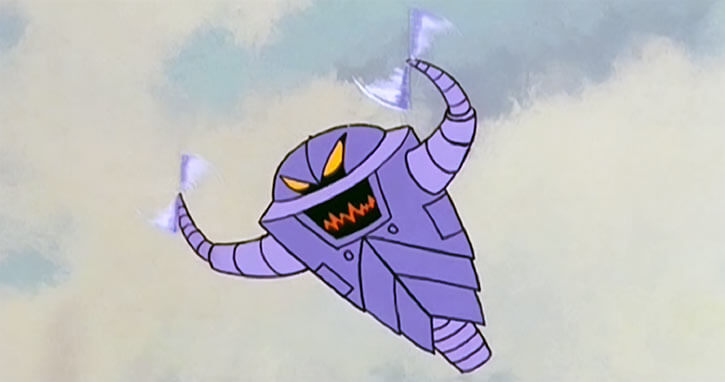 Shrinking is always on. 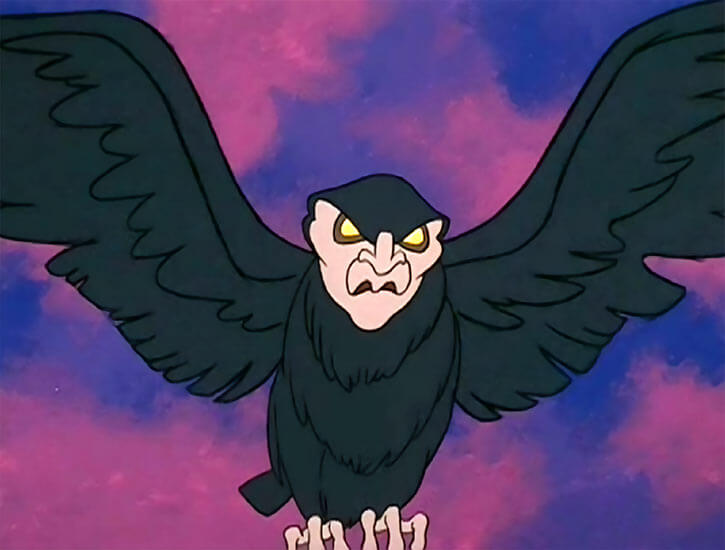 A bionic falcon created by Skeletor to attack He-man from above. When first seen it was large enough to carry Cringer on its back. After this initial appearance, it was a normal sized falcon.

The first Screeech must have been damaged when it crashed through the wall of Snake Mountain. The smaller version, a second design, is primarily used for distraction. Screeech appears in three episodes – “Fraidy Cat”, “Visitors from Earth” and “The Toy Maker”.

Growth is always on and already factored in (-1 FC). 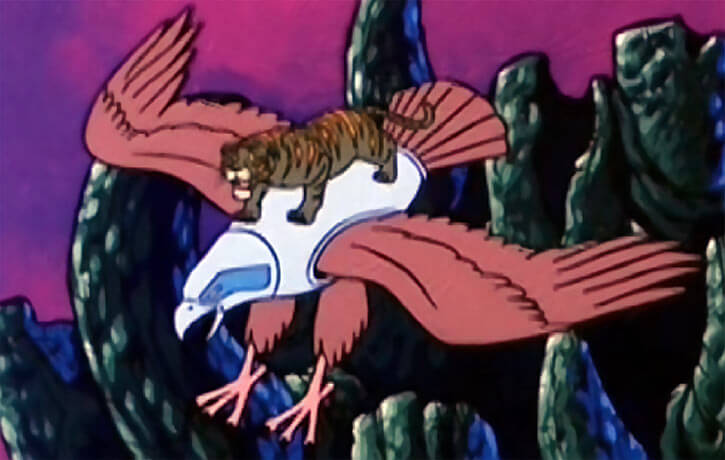 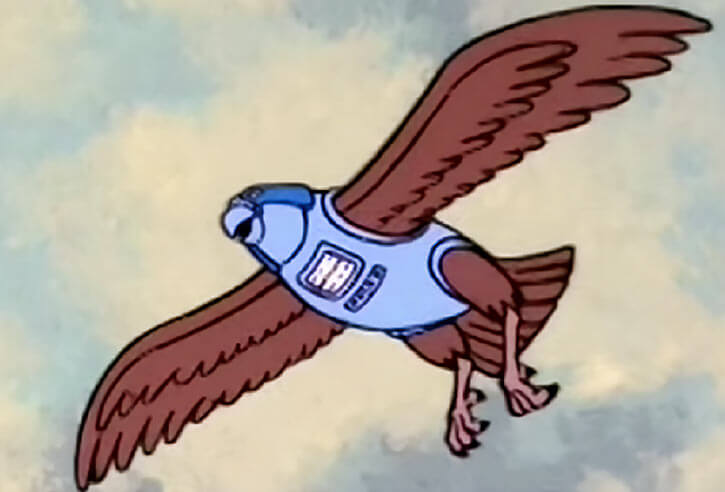 Grayskull had only one entrance/exit. Snake Mountain, on the other hand, had a variety of entrances, exits, secret passages, and tunnels.

Throughout the series the writers and directors did not seem quite sure how to get the heroes and villains in and out of Snake Mountain.

The man-faced raven, may not have a name. Or it may be simply “raven” or it might be “raven raven”. The Raven might be homage to Edgar Allan Poe’s The Raven poem  .

Source of Character: Filmation Presents 1983/1984 animated series He-Man and the Masters of the Universe and the 1985-1987 She-Ra Princess of Power.

Helper(s): he-man.wikia.com, He-Man and She-Ra: A Complete Guide to the Classic Animated Adventures.