Escape from New York is a 1981 sci-fi movie with a cyberpunk  atmosphere. A cult classic, it was successful enough to get a sequel (Escape from L.A.) 15 years later.

As with other John Carpenter sci-fi films, Escape was an important movie for Generation X nerds. Back then there was little material in that vein, and the film was drawing its themes from many fan-favourite works of dystopian sci-fi while wrapping them in unprecedented visuals.

“Snake” Plissken is a world-class hardboiled badass. He is a former war hero, a highly trained special forces soldier (possibly the best), and has an astounding ability to survive the worst situations. He can go where armies would fear to thread – and he’ll do the job, too. He is also a highly experienced renegade and criminal.

Plissken has a particularly forceful personality and killer presence. In many situations, people simply do not dare to attack him. Often, they assume that his mix of arrogance and fearlessness conceals some kind of trap or trick.

After the Escape from New York incident, he is a legend in his own time, particularly among the dregs of society, and can pull astounding feats of intimidation.

S. Plissken used to be an American, twice decorated war hero on an alternate, near-future Earth. He used to belong to the special forces unit called Black Light and also got medallions from campaigns in Leningrad and Siberia.

Plissken famously survived the events in Cleveland, escaping certain death through undisclosed means. What happened in Cleveland is unrevealed, but it was apparently horrible. He is the youngest person ever to have been decorated by the President, and presumably quit the Army after losing an eye. 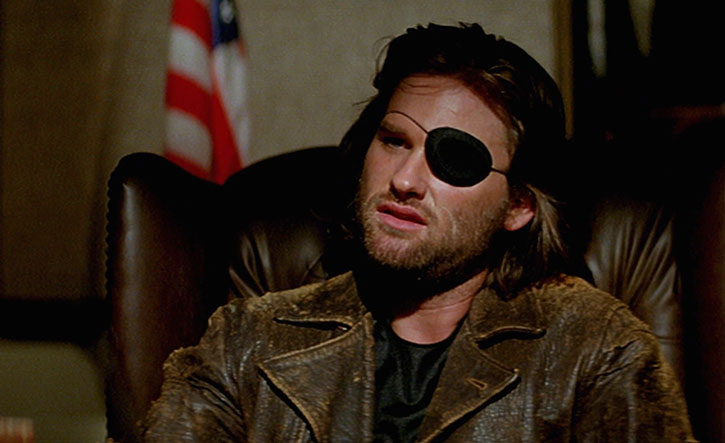 All around him, however, America was becoming a highly regulated land, slowly eroding liberties in the name of security and morality. Plissken, a fierce amoral individualist, gradually grew disgusted with the colours he risked his time many times to defend. Over time he evolved from a socially misfit vet to an outright criminal.

Snake robbed the Federal Reserve and became a well known pistolero, duelling for money. In 1997 he was finally captured and sentenced to life.

However, the government soon had to come to him to solve an unprecedented crisis. The President’s plane had been downed above Manhattan Island.

Manhattan had long since been walled off and converted into a free prison for the worst criminal scum of the US. These included large numbers of very dangerous and quite armed psychopaths and assorted malcontents.

With a timed-release virus in his bloodstream, Snake was sent in and ordered to save the President. He had to do so before the virus would activate and kill him. The mission succeeded. Much to Plissken’s disgust a media circus ensued, and he became a legend and media sensation.

However, the president didn’t have any loyalty toward his saviour. He tried to turn the tables on Snake, prompting Plissken to sabotage a peace conference in retaliation before disappearing. Once underground he became a nomad and a rebel, doing black ops for various accounts and generally wandering around doing illegal things. 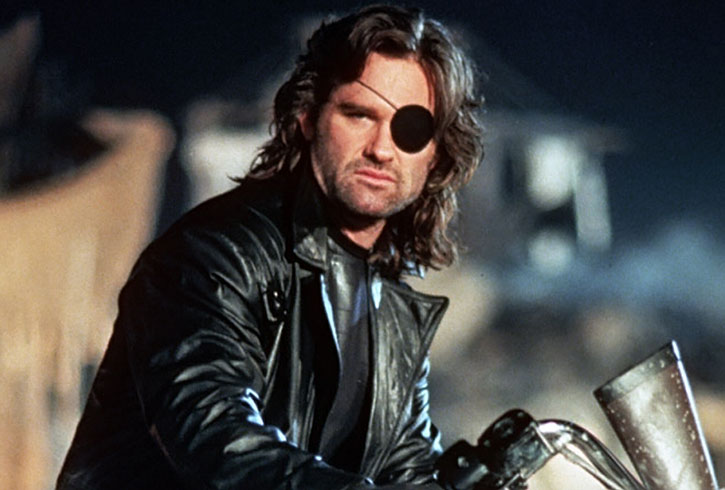 Meanwhile, the laws became even more extreme. They now allowed no guns, no foul language, no smoking, no drinking, no drugs, and no sex outside marriage. Anyone breaking the laws was killed or sentenced to life in either New York or Los Angeles. By this point the L.A. area had been severed from the mainland by a cataclysmic earthquake, becoming an island.

During the 15 years that followed his escape from New York, Snake committed 27 “moral crimes” in the puritanical US of A. He eventually got captured again and spent several years in a special prison.

However, the control device for America’s newest weapon, a global EMP satellite, was stolen and given to Guervo Jones, an anarchistic leader in LA. And thus Snake was again sent on a mission. He was infected with a new virus and sent in with 24 hours to live. Again, an antidote would only be injected once the job was done.

The trailer for the original, vintage movie in 1080p.

He looks like the archetypal shadowrunner (hell, he *set* the look). He’s got greasy shoulder-length black hair, a black patch over his eyes, and a full three days worth of stubble. In short he looks downright squalid.

The patch over his missing left eye makes him appear even grimmer, as does the constant hostile facial expression.

While not ripped, he’s quite muscular, and wears a cobra tatoo over his belly. He’s 1,76m (yeah, everyone thought he was taller…) and 79kg.

Snake Plissken wears black leather that looks a bit like a snake’s skin, and a big black leather duster. He has two shiny guns on low-slung thigh holsters, just like an Old West gunfighter.

Snake Plissken is extremely dangerous, and does not respect either law or morals. Nothing is sacred or even important to him, and he thus cannot be corrupted or accurately gauged. He doesn’t give a damn about who lives and who dies. He might be a sociopath.

He follows his own obscure code of honour, has only room for his own survival (some would say he always cheat, in fact), and kills without inhibition. Still, he tends not to kill people he considers worthy, and is likely to be vaguely grateful for any help (of course, he will never ask for help). He’s stern, and short in speech.

He also has an unbelievable amount of nerve. Plissken may get angry, but he simply does not appear to know fear.

“I don’t give a fuck about your war… or your president.”

“I got just one question. Which one of you assholes gets to die trying to stick me ?”

Snake : “Sad story. You got a smoke ?”
Malloy : “The United States is a non-smoking nation ! No smoking, no drugs, no alcohol, no women — unless you’re married — no foul language, no red meat !”
Snake : “Land of the free.”

“Your rules are really beginning to annoy me.”

(Snake is surrounded by a crowd of goons pointing their guns at him while he himself has no weapons drawn. He looks at them very calmly.) “Okay. I’m going to leave you a chance.”

(A crowd of armed survivors is surrounding him. He calmly lights a cigarette) “It’s OK, I’m just passing by.” (proceed to walk through the opposition while they just look at him, too intimidated to act or halt him).

“You’d better hope I don’t make it back.”

Plissken his very much set in his own universe. However, if Borsten’s time platform could snatch Snake’s old west equivalent – Jonah Hex… 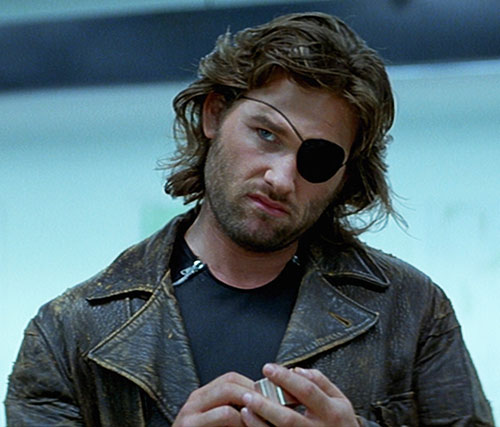 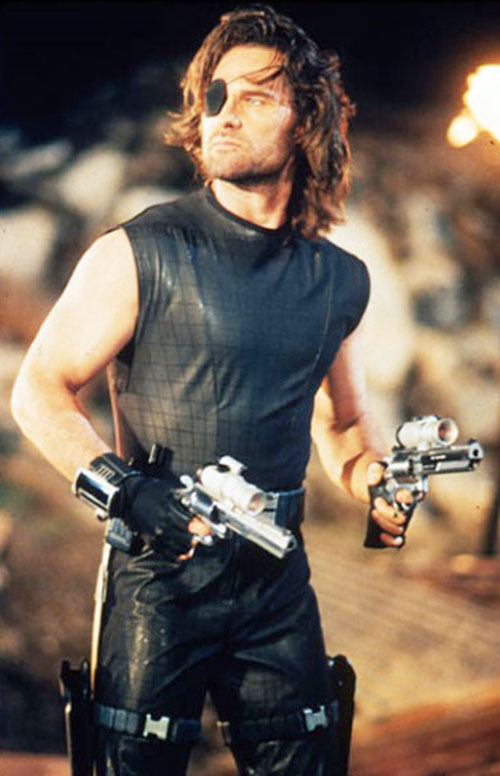 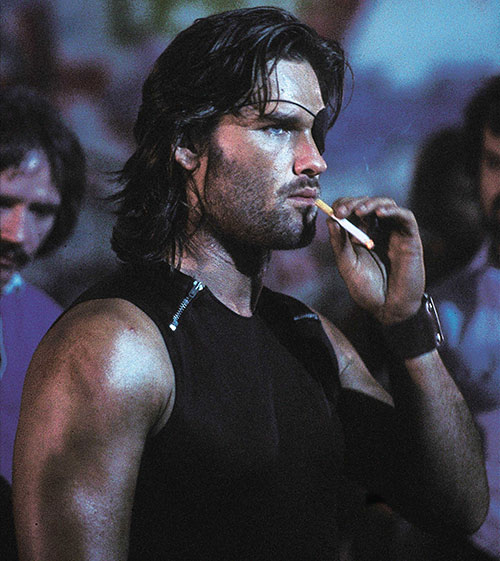