These two blokes only appeared in one 1976 DC comic book, and the story didn’t even properly end.

But I loved their basic, archetypal 1970s quality. They look very much like stock villains you’d expect to see in a C-list 1970s comic book. Or an early Champions or Villains & Vigilantes supplement.

Snake is a highly acrobatic fighter. He can nimbly evade all sorts of attacks for pretty much as long as he wishes. Yet his gaunt frame packs remarkable strength when he goes on the offensive.

Nowadays, he might be depicted as a Brazilian Jujitsu expert. With extensive training in strikes, holds and ground fighting.

Powerhouse is a particularly large, strong and robust man.

He also appears to be a natural superconductor. Electricity does not harm him. And if he touches an electrically powered item (such as a functioning light bulb) he becomes electrically charged, likely shocking unto unconsciousness those touching him.

Snake and Powerhouse were special talent working for an undisclosed Miami mob.

When the Mob-Master decided to eliminate the costumed vigilante codenamed the Assassin, they were loaned to him.

The duo gave a demonstration of their unusual talents to the Mob-Master – by defeating a small army of thugs on the Master’s yacht.

Then they… never were seen again, since Codename: Assassin ended just as they were confronting the titular character.

Both Snake and Powerhouse could appear pretty much anywhere, really.

(In 2008, we glimpsed them again. In this version of the story, Codename: Assassin is a daarrk, murderous, unhinged murderer who murders everybody aboard the murder yacht. But then, that was at least three universal reboots ago, so whatev.)

Snake is a cross between old Marvel villains (“Snake” Marston in the costume of the Viper (Jordan Dixon), with Cobra’s slithering movement).

Cf. quotes. It’s all that we have.

“If you *could* grab me, fool, what would you do ? You have neither my strength nor my training — training which I received by spending 15 years in a South American circus ! Against my skill and agility, you’re like children. And like children, you are obstinate and foolish. You refuse to admit my superiority, and thus are finished — with defeat !”

“Take your best shot, punk. It might be your last !” 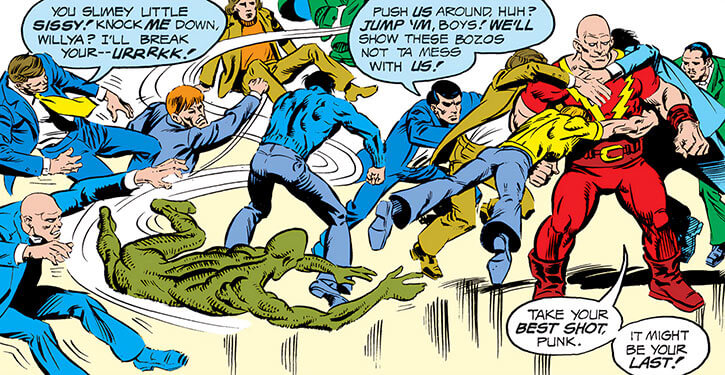 Much of the material is speculative, since very little was seen of them.

Speculative stats due to lack of material.

Like a rock ● 3 points ● Descriptor: Unrevealed
– Protection 2
– Feature 1 — +6 special bonus against anything that would knock him prone, trip him, topple him and the like.

Speculative stats due to lack of material.

That they have the exact same PL wasn’t intended, but it seems likely that they would.