He was only seen that one time in 1942. But the Snake is Superman’s first real costumed villain.

Suddenly appearing from the shadows, it’s the Snake ! With each toss of his poisoned throwing lances, another man dies !

A tunnel cave-in leaves several men dead, yet the remaining workers return to finish building the tunnel the next day. ”Big Luke” is the first to feel the bite of the Snake, collapsing in pain.

He is taken to the hospital, where Superman visits him. Superman is not his only visitor however. The Snake has returned to finish the job. Evading Superman’s swift blow, the Snake takes a nurse hostage, allowing him to escape.

Superman (as Clark Kent) returns to visit Big Luke, but he dies from the Snake’s poison. Superman uses his face-molding powers to alter his appearance so that he can join the construction company, despite some conflict with “Matt,” another worker. While Matt and Clark are alone, Clark shows off how quickly he can work, which gets Matt’s goat.

Matt raises a pick to assault Clark with while Clark’s back is turned. But the Snake intervenes, appearing mysteriously. With a toss of a lance, the Snake’s blow is struck… but he hits Matt instead of his target, Clark, due to Matt’s sudden attack.

The Snake flees, but Clark, as Superman, pursues. The Snake starts a cave in which distracts Superman long enough for the Snake to escape.

Meanwhile, an overly curious Lois Lane investigates the construction site. She accidentally discovers a secret door behind which is the secret lair of the Snake. The Snake finds her, and puts her in a crude death trap, tying her to a “dump car” which is then sent rolling down a track to certain doom.

Superman sees her and rescues her, just as the Snake comes out of the shadows to finish the job. Superman catches the thrown lance and tosses it back at the Snake, but misses. The Snake escapes again.

Later, foreman Bill Chanty accuses the disguised Clark of killing Matt, since Clark had been alone with Matt when he was attacked. The two struggle, and Clark rips Bill’s shirt enough to reveal a snake tattoo.

This is enough proof to convince everyone that Bill is really the Snake. Bill confesses, stating that he had worked to make the Allerton Construction Company a success, and yet he never shared in the profits, so he vowed to ruin the company at any cost.

He then pulls out a gun and takes Lois hostage, driving away in a stolen car. Superman pursues, but loses the trail when Bill stops and parks in a parking lot. Superman, not seeing a moving car nearby, assumes that the car must’ve been going faster than he thought.

Bill, meanwhile drags Lois to a snake farm and shoves Lois into a snake pen. Bill mentions that raising snakes has always been his hobby, and now it will pay off. The snakes in the pen rush to attack Lois, but Superman (having doubled back) rushes in just in the nick of time. Bill plans to shoot Lois but one of the snakes bites him. Bill is then taken to the hospital.

Superman then finishes the tunnel so that the construction company won’t lose its defense contract. Somehow, Clark Kent gets the scoop.

He wears a yellow scaly skintight costume, with orange splotches. Much like Copperhead’s costume, the costume has a snake-head for a hood, with Bill’s face visible somewhat underneath. The only visible parts of his body are his hands and the lower part of his face. 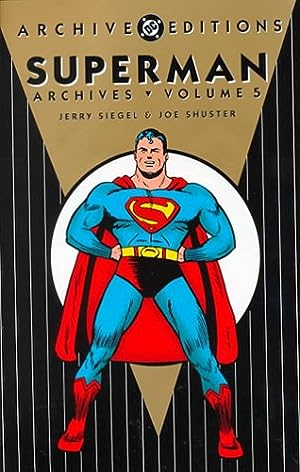 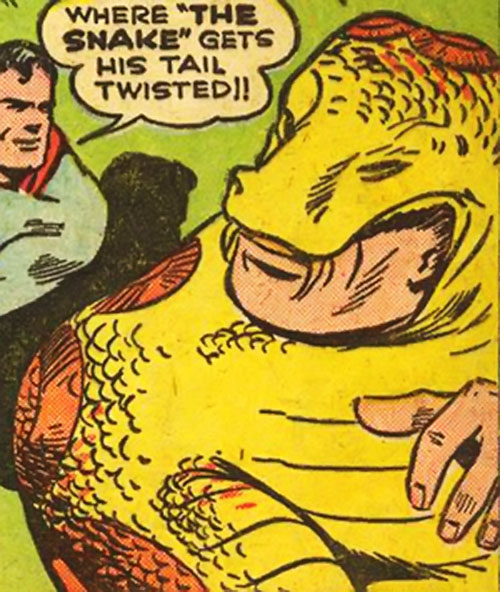 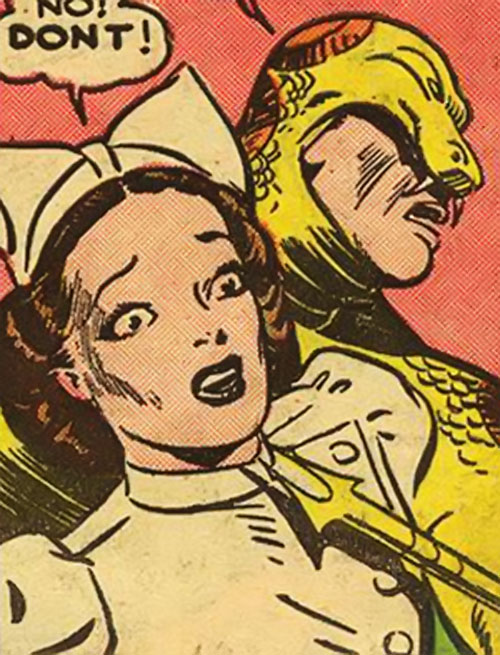 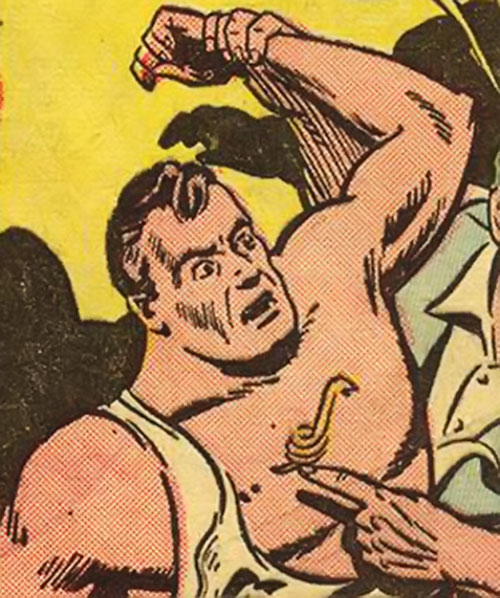