Snapdragon is a superb fighter and martial artist. She operates markedly above the usual rent-a-costumed-thug level. Early on she had a small arsenal of low-tech, exotic weapons. She later operated with a fuller suit of armour with reinforced striking surfaces.

Though she talks about honour (and what she actually means is face), Snapdragon has a high degree of shrewd ruthlesness. She uses devious tactics whenever convenient, is not concerned about fairness and is quite intelligent – not to mention very ambitious.

Sheoke Sanada is an alumni of the Taskmaster Academy, a school training henchmen for super-villains. Both she and her older brother Kono — better known as Kono the Sumo — are criminals and superior martial artists. It is possible that they come from a family with Yakuza connections.

Ms. Sanada was part of the same Taskmaster Academy class as Rachel Leighton, the future Diamondback. They initially got along well, but an undisclosed incident took place between the two young women. Sanada grew to hate Leighton, considering that she had dishonoured her. However, they soon lost track of each other.

Over the years, Sanada developed her fighting skills to a very high level. She also built the identity of the costumed mercenary Snapdragon. She apparently became a reputed operative, and later described herself as one of Europe’s top assassins. However, she tends to exaggerate these things.

The Indestructible Man and the Ultimate Woman

In 1983, Snapdragon was hired by Damon Dran (aka the Indestructible Man). Dran was attempting to capture the Black Widow as a part of an intricate plan to destroy S.H.I.E.L.D.. Although a group of lesser assassins failed, Snapdragon ambushed the Widow in the darkness — where her night vision visor gave her a considerable edge — and beat her up.

The two women fought again as Black Widow was escaping from Dran’s base, which was being destroyed by a S.H.I.E.L.D. bombardment. They were on a roughly equal footing. But the Widow managed to throw Sanada from a catwalk and rush out of the base before it was razed. While vaguely believed dead, Snapdragon survived.

During the early 1990s, Superia (Deidre Wentworth) set out to round up an army of female costumed criminals. She wanted to pitch her ambitious Femizons project to them. Superia also retained a number of operatives on a long-term basis. These included Snapdragon, who presumably worked as an enforcer and bodyguard.

Dozens of female super-criminals were invited to a luxury cruise where the Femizons pitch would take place. And Diamondback (Rachel Leighton) was among the attendees.

Not the love boat

Seeing an occasion to get her vengeance, Snapdragon confronted Diamondback, beat her up and threw her overboard. However the other operatives of Superia detected the problem and saved Diamondback in the nick of time. They did not suspect Snapdragon for the attempted murder.

Superia’s Femizons plot failed due to the intervention of Captain America and Paladin. But Snapdragon remained on her team of bodyguards, along with Iron Maiden (Melina Vostokovna) and Blackbird (Heather O’Gara).

During the 1993 A.I.M. weapons expo, Sanada again crossed paths with Leighton. However, Diamondback, who had become Captain America’s lover and sidekick, was posing as the villain Mother Night. Thus, Snapdragon did not recognise her. This left Leighton free to confront her at a convenient time and demand a rematch.

Leighton was now considerably tougher, in large part thanks to a transfusion using Captain America’s blood that gave her a degree of Super-Soldier capabilities. She overcame her old foe and, in a moment of insane anger, drowned her in a fountain.

Dazed and confused, Diamondback wandered away. After she recovered her mind, she started developing crushing guilt over seemingly murdering Sanada.

Leighton investigated to establish whether Sanada had indeed died by her hand. Being in shock she had not checked her kill, and it was possible that Snapdragon had survived.

All the clues Diamondback found pointed at Snapdragon being dead. Furthermore Dead Ringer — a superhuman able to duplicate the appearance and capabilities of dead person by using a sample of their corpse — briefly impersonated Snapdragon.

Kono the Sumo claimed that he was looking for the murderer of his sister, and that he had burned her corpse. When he came to suspect that Leighton had killed Sheoke, he tried to drown her in a fountain in revenge.

Convinced that Sheoke Sanada had died at her hands and looking to make amends, Leighton ended up working for Superia. She took on the Snapdragon identity and garb to complete Sanada’s contract in her stead.

So yeah, she got better

Unbeknownst to all, Ms. Sanada actually survived, though she wasn’t seen until 2011. She started working as a manager and security director rather than an enforcer and fighter. This may have been a reaction to her clash with Diamondback, but it was more probably as a way to assuage her ambition.

Snapdragon came to be employed by Count Nefaria, who was starting to establish himself as the kingpin of crime in L.A.. This rise led to a clash with vigilantes Moon Knight and Echo.

After repelling Moon Knight with two of her men, Ms. Sanada hired local superhuman enforcers the Night Shift. She sent them after the vigilantes, but the Shift was defeated.

Though this failure hurt her standing, Nefaria maintained his trust in Sanada. Snapdragon continued to work to present herself as an intelligent consigliere and security director to her employer. However, before she could recruit further enforcers, Moon Knight made his move and set up an unexpected trap.

Despite his power, Nefaria was forced to retreat and the dazed Snapdragon was captured.

Sheoke Sanada’s apparent ethnicity had varied quite a bit, both in terms of features and skin tone. Our No-Prize Hypothesis  is that she uses a low-powered image inducer that she considers a part of the Snapdragon look.

In this hypothesis, the Snapdragon visual identity includes both a luscious strawberry blonde wig, and a little visual distortion to give herself a Caucasian complexion. Perhaps this is meant to protect her secret identity. Or perhaps she reasons she’ll command higher wages if she looks White.

It’s a bit difficult to say, but the 2010s appearance seem to be cutting the difference and depicting her as being Eurasian.

A professional killer and buttkicker, confident in her martial superiority and fighting spirit. Sanada has a sense of honour, but not the archetypal bushido-style one. For instance she did not hesitate to betray the interests of Superia to kill Leighton during the cruise. It’s more of a sense of personal face. 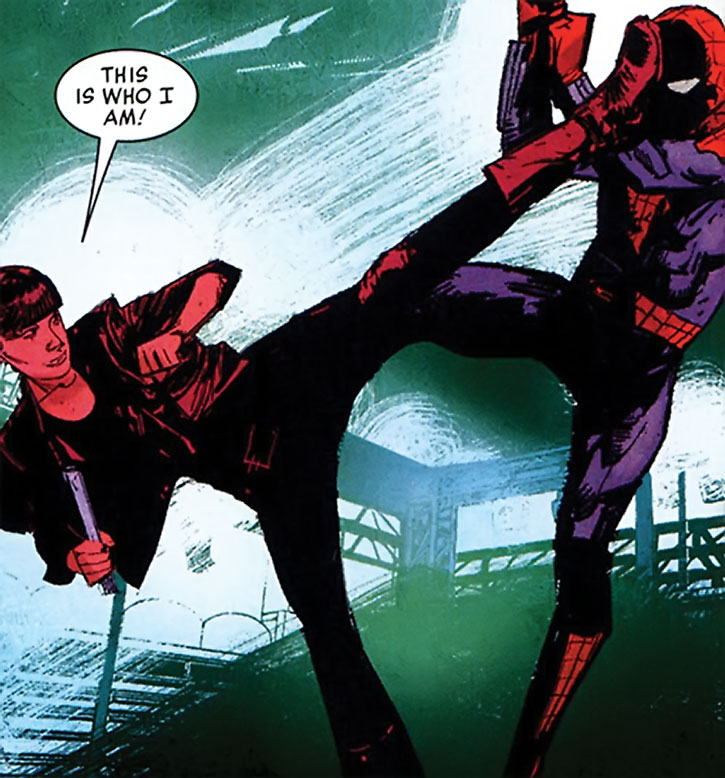 Snapdragon is very big on boasting about being a very high-end martial artist, to the point of stretching the truth. She insists :

Snapdragon often talks in a grandiloquent and stilted way – as if she were doing the trailer voice-over for a movie about her exploits. If she spots something that will help her look tougher and more professional, she’ll make dramatic and self-aggrandising announcements about it. Even if that require a little bit of spin and ignoring context.

This verbal flourish seems to be driven by a strong desire to be the toughest fighter in town and all-consuming ambition. Snapdragon wants to be an important and highly reputed assassin and enforcer, no matter what, and seizes any occasion to prove her worth.

Nowadays, Snapdragon also wants to project the impression that she’s an experienced, intelligent consigliere for her employers. While she doesn’t have the experience and depth of vision of a real criminal strategist — and may be too angry and proud to ever excel in this function — she is obviously smart and learning about criminal management from her employers.

Her advice is not as good as she’d like it to be, but she’s a competent sounding board.

“You see before you the Black Widow — most feared spy in the world. She overcame six assassins… assassins whose job it was to capture her. But they failed — the fools. And I was forced into the fray. And that is when the Black Widow suffered her long overdue defeat — at the hands of Snapdragon.”

“You disappoint me, Black Widow, allowing your emotions to trigger such an outburst.”

Equipment:
Snapdragon has used several sets of equipment.
The set of equipment used in the 1980s was :

In 2011 she wasn’t carrying any special gear (except for a cell phone, presumably secured and encrypted) but she kept a Katana [BODY 09, EV 04 (05 w/STR, 08 w/Martial Artist)] in her headquarters in case it was necessary for her to take on an elite fighter.

Helper(s): Some aspects of her background from secondary Marvel sources. 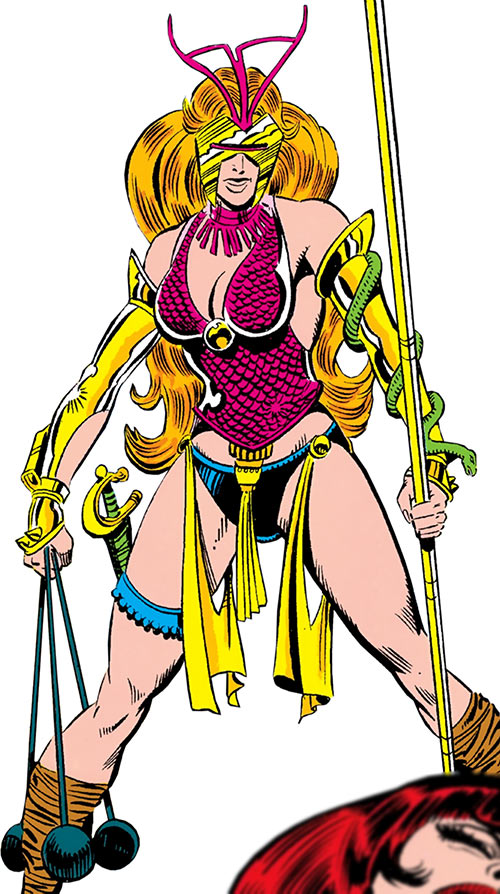 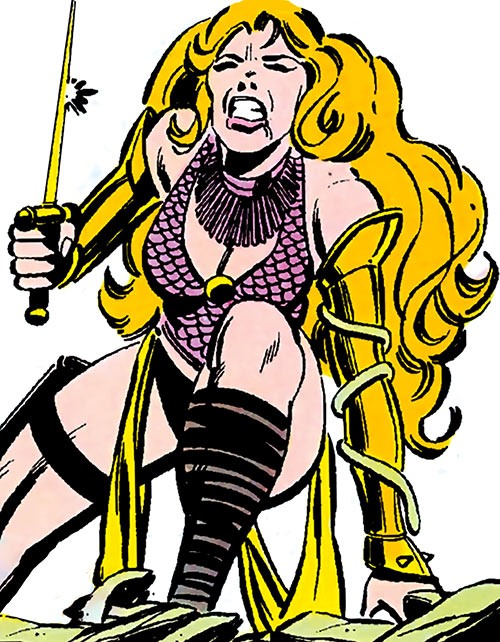 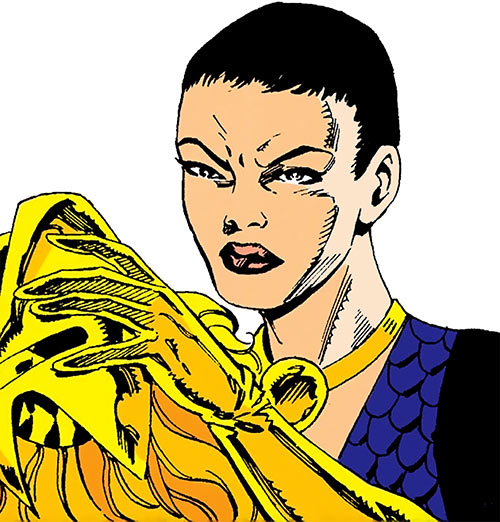 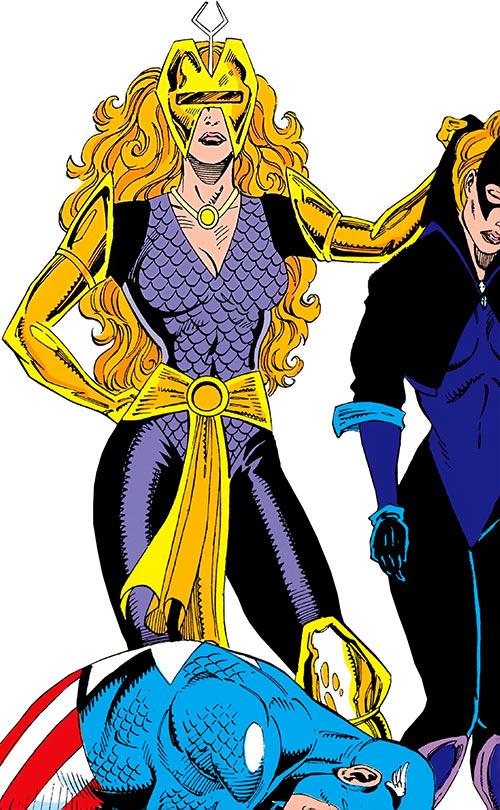 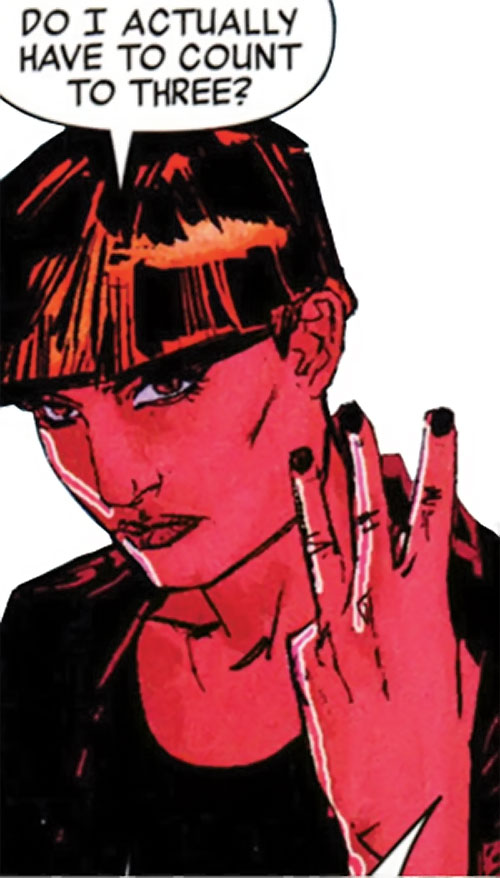 With Rachel Leighton at the Academy : 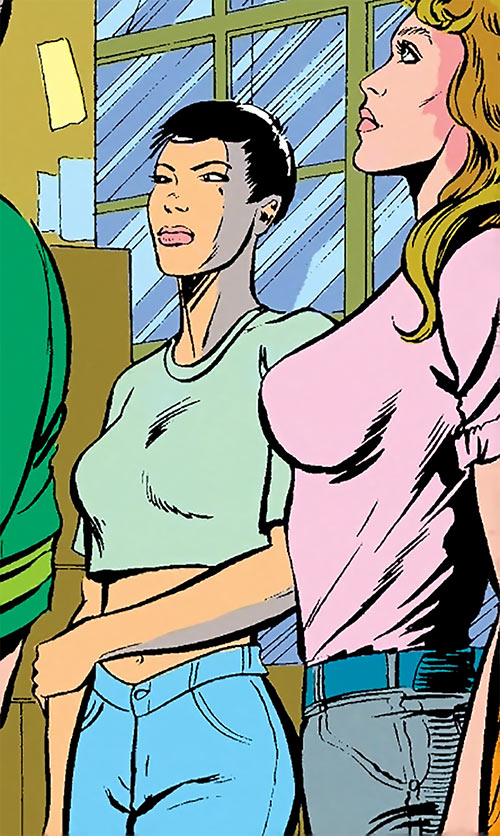