The Snarks are the aliens in the 1980s Power Pack comic books from Marvel. For more context about the story, you should first see our Power Pack team profile.

These are older, quick notes. Mostly because they are handy alien troopers with a notable visual design.

This is an average Snark soldier. He’s just a grunt.

His weapon is probably imported. While the Snarks are pretty hi-tech (they even have developed hyperspace drives), they look for the best weapons available and tend to import them. Why these guns perform so poorly in the comics is left to the reader’s ingenuity.

The Znˆrx, nicknamed the Snark, are a reptilian race. Their homeworld is nicknamed Snark World it is roughly Earth-like. Yet it seems deserted, with Snarks living underground.

The Snarks are governed by an Emperor, who is polygamous. Each of his wives, or Queen Mother, is the head of an extensive clan – they are the actual power. Each can have a single High Snark (a bigger, tougher offshoot of Snark – add 1 to STR and BODY) offspring.

When the Emperor dies, the Queen Mother and their clan go to war against each other for the right to crown their High Snark as a new Emperor. These highly devastating and cyclical Snark Wars are considered a natural hazard in their galactic sector. They tend to impact on neighbouring planets.

First contact with humanity happened when the most vicious Queen Mother, named Maraud, sent a military force to Earth. These were to capture an experimental matter/antimatter converter, whose prototype had been developed by professor James Power. The mission not only failed, but resulted in the creation of the Power Pack superhuman kids. These ultimately were the downfall of Maraud.

Snark soldiers are no more evil than human soldiers.

While they seem clumsy in the Power Pack comics, it is probably more a matter of a big, heavy thing trying to catch a small, fast thing.

In the DCU, the Snark Wars would have undoubtedly caught the attention of the Green Lantern Corps. But Snark foot soldiers can be used as mercs for any extraterrestrial villain you choose to use or design. 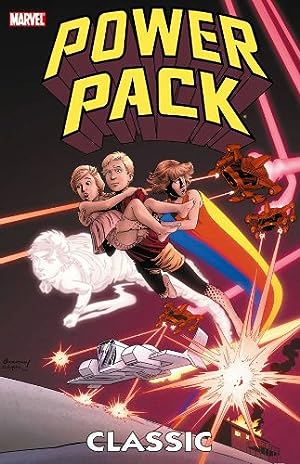