Snowblind has been deprived of sight since birth.

On the other hand, he can generate a white field (in DC Heroes RPG terms, Darkness) around himself. It seems to be a field of extremely bright, white light that may be akin to the “living light” used by Dagger. Not only is this field bright and white enough to blind even metahumans, but it increases Snowblind’s physical power to a superhuman degree.

Between his superhuman might and the fact that his opponents cannot see a thing, Snowblind can be devastating in combat.

Being ruthless, smart and calculating, however, makes him wary. If he has reason to suspect that his opponent can somehow perceive his attacks, he will retreat and start throwing objects with superhuman power (generally AV 06 and EV 07) rather than risk closing in. Some of those throws will be Critical Blows. After all, his target is unlikely to have a high OV.

The white field appears as a pure white, luminous dome streaked with lightning. If used indoors it will just conform to the available space.

Snowblind is a minor New York drug lord. Although his turf is just one section of Brooklyn Heights, it is well managed, and controlled with an iron fist. As part of his slow, methodical rise from poverty to power he allied himself with one of the major criminal powers in Brooklyn — Deathwatch.

Although this association made sense, it ran contrary to Snowblind’s taste for control and domination. Thus, it occasionally frustrated him.

Still, he was so affluent and in control that he could stop getting his hands dirty by the early 1980s. Before that he apparently occasionally used his abilities to take a personal hand in the mayhem, and he may have started out as a superhuman enforcer or connected guy.

During the early 1990s, the appearance of the new Ghost Rider (Dan Ketch) in Brooklyn created a shockwave in the borough’s criminal scene. This disruption eventually affected Snowblind’s operations. But Deathwatch (who already had clashed with the Rider) turned down Snowblind’s request to have the problem solved. He told him to handle this personally.

Incensed to be ordered around and to have to act like a common thug again, Snowblind nevertheless had little choice but to comply. He let the Rider come to his home office and engaged him there.

The Rider could somehow see Snowblind through the white field. Still, the confrontation was inconclusive. Snowblind shut off the white field as the Rider was about to subject him to the Penance Stare (being blind, he was immune).

Two cops then burst in, forcing the Rider to flee. The corrupt cop gunned down his partner. This murder was framed on Ghost Rider with the help of Deathwatch’s media contacts.

No honour among thieves

Even with this, Ghost Rider was not disposed of. Furthermore Deathwatch continued to deny support to Snowblind.

Then came a special task force of brutal but untouchable cops led by Lieutenant Badilino. This made backstabbing between the two crime lords inevitable. Deathwatch struck first, with his lapdogs on the local news “accidentally” showing footage of Snowblind working at one of his drug warehouses.

This was seen by both Ketch and Badilino, who immediately converged toward the warehouse. The Rider, of course, arrived first. Realising he had been betrayed by Deathwatch, Snowblind attempted to strike a deal with the Rider. He then took his own personal assistant hostage in order to escape, as he could neither sway nor destroy his foe.

Snowblind made his hostage visible to show he wasn’t bluffing. This allowed the Rider to deduce Snowblind’s position. He hit him in the head with his chain, interrupting the white field. The Rider thoroughly beat Snowblind up then left under fire from Badilino’s men. Badilino then gunned down the demolished Snowblind.

Snowblind survived, but was interrogated in his hospital bed by the Ghost Rider. The crimelord volunteered clues as to the location of Deathwatch to avenge his betrayal. He also informed the Rider that Deathwatch was not human, and that the spirit of vengeance could thus employ lethal force against him.

Somehow learning of this, Deathwatch had Snowblind captured. He then added him to the dozen of people he intended to sacrifice to power himself up for the fight against the Rider.

Deathwatch had his servants Hag and Troll torture Snowblind (who was still hurt too badly to use his powers), then started draining his lifeforce, using it as a source of power and eventually killing him while he fought Ghost Rider. At the conclusion of this encounter the Rider, acting on Snowblind’s revelation that his foe was not human, killed Deathwatch.

At the gates of Hell

Yet, this brutal episode was not the end for either of the two villains.

Snowblind was revived by scientist and thanatologist Anton Hellgate. Hellgate turned him into an undead made man working for him. At some point, Snowblade lost a confrontation with the Punisher.

When it appeared that the Ghost Rider had killed several Hellgate operatives, Snowblind provided advanced weaponry to several allied gangs. He then personally ambushed the Rider and nearly destroyed him with the finest Hellgate arsenal. But Ghost Rider simply would not stay destroyed. He strangled Snowblind into unconsciousness with his chain.

Snowblind and several allies managed to escape the police, and were castigated by Hellgate. Snowblind was never seen again.

Snowblind can make his eyes glow like two white stars for dramatic effect.

In his early appearances, he was wearing a supervillain Spandex costume. When he become an undead he started wearing a white three-pieces suit, dialling up his sophisticated and sinisterly suave manner. He also carried a heavy cane with a pommel shaped like an undead dragon’s head. When fighting, though, he would wear a white version of his old costume.

Snowblind is thoroughly ruthless. He treats anybody other than himself as a completely disposable mean to an end. He might be one of the few people who are actual, clinical sociopaths. Predictably, he handles frustration and lack of respect or obedience extremely poorly. He will do anything necessary to win and prosper.

Snowblind is quite methodical and thorough in his evil. He managed his criminal operations very seriously. In particular he had a number of brutal, ruthlessly corrupt cops on his payroll. Feel free to use tactics and attitudes from hardcore organized crime, dog-eat-dog movies, preferably with Al Pacino and/or Harvey Keitel.

Snowblind comes with a strong urban decay, brutal mob rule feel, but with the sophistication and financial might of the 1990s.

Snowblind’s home office and operations are clean. Furthermore, all incriminating evidence (chiefly computer data) can be destroyed within minutes. He’s generally very good at not being incriminable.

Becoming an undead did not change his personality much, since it was already pretty bad. But he did not seem to resent his servitude toward Hellgate, and acted toward him like any villainous henchman would. This out-of-character trait is likely due to having been brainwashed when raised from the dead.

As an undead he was less competent and more of a caricature black hat. It was… kinda pointless, as returns from the dead go.

“No, I haven’t gone after him. I’m a businessman now, not an assassin.”

“I am afraid you have me at a disadvantage. My sources tell me that you are somewhat frightening to look at, but, unfortunately, I have been blind since birth.”

“I am responsible for me and me alone, man. No one took care of me when I was growing up. These kids are on their own — the strong ones will survive.”

(To a police captain on the take, who just murdered his partner as a spontaneous coverup)
“Nice, captain. Very inventive. There will be an extra bonus for you this week, and you can have what the late lieutenant would have received had he lived.”

“You want to watch that temper of yours. You never know what you might strike when you strike out blindly like that.”

“Sorry Francesca, you served me well. But I have to get out of here no matter what it takes.”

(After violently hitting a mobster with his cane) “Now, mister Pulaski, you will learn to speak to me in a civil tongue, or you will not have a tongue to speak with. Can I consider us agreed on that point ? Good. Now, if you’ll be so kind as to listen to me for a few moments, I promise this will be quite brief.”

He’s minor enough, and could have been an opponent for the black-clad, edgier Flash that appeared for a while. Since Snowblind’s power is pretty good against superspeed.

Drawbacks:
Loss Vulnerability (outside of his Darkness, DEX and STR drop to 04, BODY drops to 05 and he acquires a SPR (Blind)), Minor Rage.

Originally, Snowblind’s Darkness has a further limitation. Any being using supernatural senses (such as the Ghost Rider, who does not have eyes and thus relies on a mystical sense of sight) was automatically considered to have Ultra-vision with APs equal to the higher of their INF or INT. But only to perceive Snowblind himself, not anything else in the field.

Snownlind later learned to wrap it more tightly around himself, making himself invisible in the whiteness even for Ghost Rider and losing this Limitation.

After he was resurrected and enhanced by Hellgate, apply the following changes to Snowblind:

The Skills are a bit speculative. 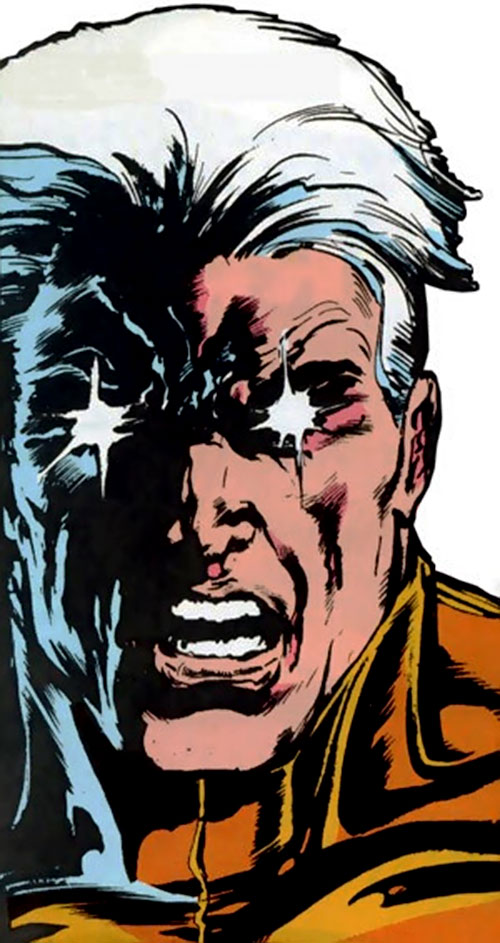 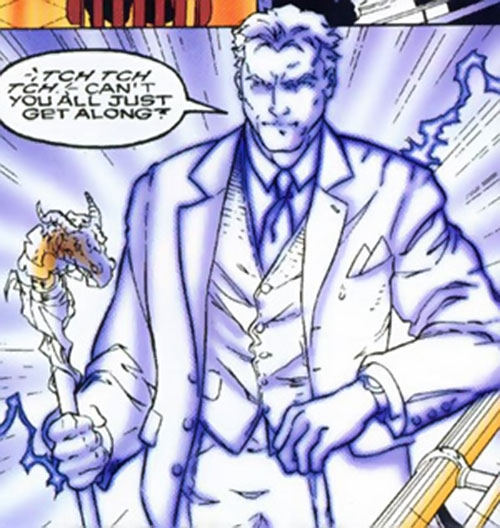 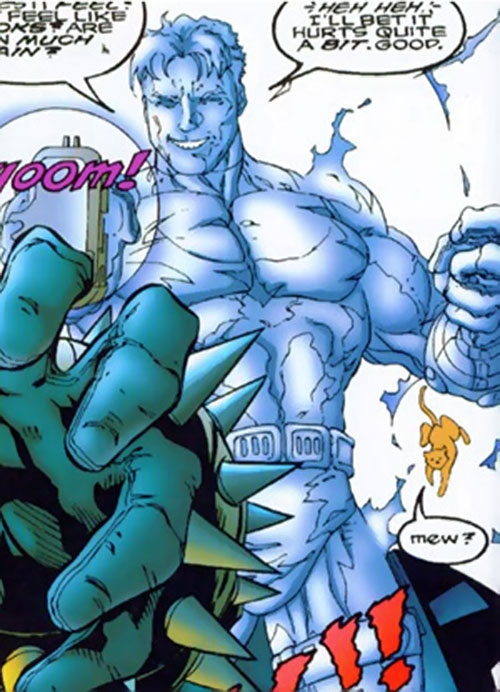