Because, daftly, all the work goes into making articles rather than promoting them.

Reposts some recent WORG illustrations. Mostly the ones I most worked on, and with an emphasis on “full view of the character standing against a stark white background” shots.

I check on Facebook *maybe* once a year because Facebook is horrible. So messages aren’t super-likely to see an answer. The bot is just there as a convenience for our readers who do use Facebook.

The same bot that feeds Facebook feeds Tumblr. I almost never check it, it’s just there for people who like being on Tumblr.

*This* account wasn’t a bot, though it mostly just announced new or revised entries. Due to the situation on Twitter, it went inactive in late 2022. Press F.

Some folks on our crew are there.

For true-blue nerds who still use RSS clients (such as Feedly), we have an automated feed. More about that in the next section.

For a little while I posted WORG pictures there. But posting on Insta with damaged hands is awful, so I stopped doing that. If somebody feels the urge of running a fan account, LMK.

It used to be a Majordomo, then a Yahoo! Group. Such adventures, much evolution.

There’s next to no content there. But it’s convenient for people who already are patrons on Patreon and want to support WORG. 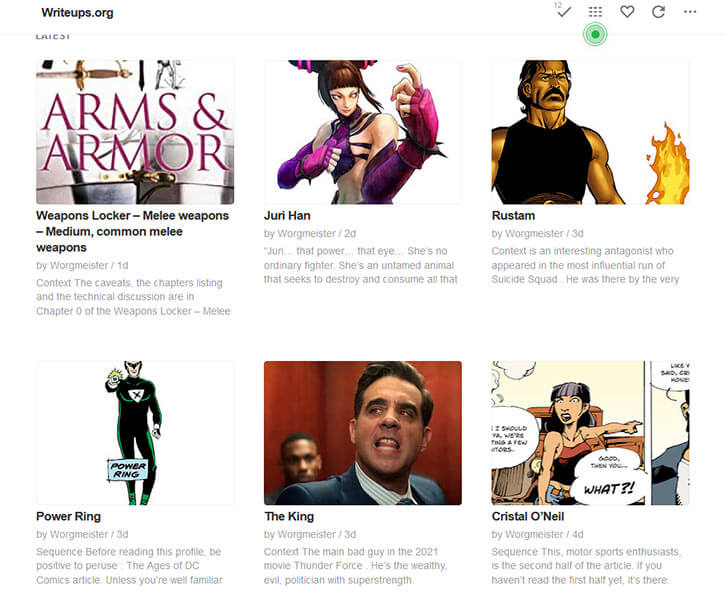 Example of a writeups.org feed on Feedly, which is what we’re about to discuss.

Since the late 2000s, the standard way to be alerted about new publications on a website is to follow them on social media  . As per above.

Now, for-profit social media is awful and exploitative and toxic AF. I don’t think I need to explain that. People know this. It’s just that they won’t let go of the super-easy dopamine hits.

So I wasn’t going to write about another way to follow website activities. It’s not the frictionless, effortless, social-stimulation-rich approach that most people crave.

Then I remembered that this here website is about how far Batman can throw a quarter-pounder hamburger. And how many sorts of Cat People we can taxonomise in obscure 1970s Marvel comics.

So it’s not like we’re dealing in mainstream pursuits *anyway*.

Having a separate feed for web sites

The idea here is to have an app that automatically checks websites of interests, and builds lists of recent articles.

This is done using the RSS protocol.

RSS had its heydays from, roughly, 2008 to 2012. These were the halcyon days of the Google Reader RSS client. Which, of course, has since joined the Google Graveyard  .

I *think* RSS is now somewhat obscure, outside of people whose work involves following a large number of news sources. Such as, say, journalists.

If you have a lot of Favourites in your browser, and thus already built a list of sites you’re interested in, you’ll prolly benefit from a RSS aggregator.

Unless you need to monitor hundreds of websites and subreddits and YouTube channels and blogs and newsletters and whatnot, the existing solutions are both free and simple.

The first one that comes to mind is Feedly  . It works on the web, on IOS and on Android.
You create a folder, put one or more websites in it, done.

The second one that comes to mind is Newsblur  . The free plan allows for following up to 64 sources.

Another well-regarded RSS aggregator is Inoreader  , though I find the free plan to be more constraining than Feedly’s or Newsblur’s.

Those heavy users I know tend to be Apple types, and use Readkit  , a sort of meta-aggregator.