Solarman’s costume absorbs infrared radiation from the sun. It then converts this energy into a variety of useful abilities, such as :

Solarman built his own costume, and was an expert in sciences involving stellar energy. Hours of training gave him a good control over all of his powers. Unfortunately, the costume lacked a fail-safe system against overheating. Thus, it would begin to burn if overheated.

Solarman apparently was an expert in stellar energy. He thought that if Superman gained his powers from the sun, he could do the same thing. He intended to use those powers for a criminal career as a robber. He spent years building a costume capable of absorbing solar energy at a rapid rate. Then he practiced the use of the costume’s powers.

He was at first disappointed at the efficiency of the costume. It worked poorly, since something was blocking much of the infrared light from the sun to Earth at that time. But when he suddenly threw a one ton weight into orbit (Superman had removed the blocking effect from the Sun), Solarman decided to start his criminal career.

Apparently he was after both money and revenge for something. Solarman first appeared in Metropolis robbing money from robbers that Superman had just captured (!). He levitated the money into his own costume and disappeared before Superman could capture him. He left skywriting (formed by money and his telekinetic ability) saying: Solarman Was Here.

Solarman later challenged Superman to arrest him in the middle of the city. Superman soon arrived, but it appeared as if Solarman actually would defeat the Man of Steel in physical combat. Suddenly, Solarman’s costume burst into flames from overheating. Superman had been using his heat vision on the costume all the time in order to overcharge its systems.

Solarman then panicked and Superman pulled the costume from him. Defeated, the criminal was sent to jail and supposedly still sits there…

Solarman looks like a rather trained man. If in public, he’ll always be gloating about his power.

His costume is orange and covers everything except his face. He wears brown boots and a pair of brown shorts outside his trousers. His entire chest, stomach and abdomen is covered with silver-colored, round, microscopic solar collectors.

On the forehead of the suit he wears a motif in yellow colors. Along the outside of his legs he keeps additional solar collectors all the way down to the boots. All in all, he looks like a typical super.

Solarman was a man capable within the field of stellar energy. He actually managed to build the costume he wears himself. Although probably not a scientist, his work clearly was the work of a genius.

Solarman felt the need for revenge against something, but was mostly interested in stealing money and being a supervillain. His premier personality trait was being overconfident and always, always gloated about one thing or another. When he realizes that he will loose, he turns into a coward.

“My powers come from the same sun that made you a superhero… and now will make me a supervillain !‘

Solarman was part of the Pre-Crisis DC Universe.But there’s no reason why he couldn’t be inserted just as he is in the current DC Universe. Just put him in an area with lots of superheroes, like Metropolis, and you’re done.

The players could probably figure out the suit’s limitations and defeat him, like Superman did, despite his great strength.

Seeing as how fond Solarman was of gloating, he probably would rival other light-based villains such as Dr. Light, etc. 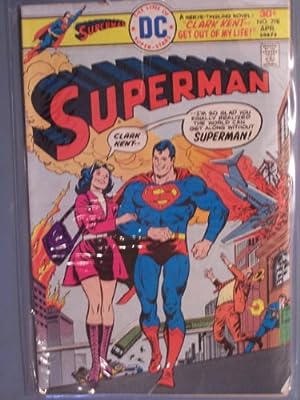