King is an athletic man, and the solar energy reinforces his body and his presence. It gives him great strength and power of intimidation, as well as a superhuman level of endurance.

Beating down Solarr is arduous if he stands in sunlight, even with “Class 10” strength. The sun simply restores his endurance too quickly. We assume that sunlight could also heal deeper wounds, albeit not as quickly.

Other demonstrated abilities include :

His accuracy with his blasts is good. And if an opponent is too fast for him, he will make good use of indirect shots. Such as making big things collapse, or melting the ground to entrap them.

If cut off from direct sunlight, Solarr’s power will noticeably drop and soon run out.

Solarr could replicate the frequency of red sun radiation with his blasts, weakening Superman (Kal-El). It is likely that he could replicate the exact light of other types of suns. This could be devastating against some opponents, such as many kinds of vampires.

In 1977, Solarr demonstrated the following improvements :

In 1979, he emitted a bright, sudden flash of light instead of a heat blast. This blinded Quasar (Wendell Vaughn) for a good while. But Solarr prefers to make killing attacks.

By 1981 he had reportedly refined his powers further. The two notable bits were :

In 1973, drugs runner Silas King’s VW van  broke down during a New York-L.A. run. He foolishly continued on foot in the middle of the Nevada desert. Though he knew enough to feed on cacti, heatstroke and thirst made short work of him.

But due to a latent mutation, King survived long enough to reach a Nevadan burg. However, his terrible experience in the desert had damaged his mind, and activated his solar powers.

Unhinged and megalomaniacal, he became a murderous super-villain.

Solarr went on to rob banks on Wall Street. He slaughtered more than a dozen guards and bystanders. He was stopped by Captain America (Steve Rogers). Back then Steve had augmented strength, but even with this Solarr was too hard to take down. Cap ended up dousing Solarr in all-weather construction paint, cutting him off from sunlight.

In (presumably) 1974, King was one of the super-villains hired by Egghead. Other mercenaries were the Swordsman (Duquesne), the Porcupine (Gentry), Rhino, the Eel (Stryke) and Power Man (Josten). They were stopped by fledgling Canadian super-team the Flight (the ancestor of Alpha Flight). The fight took place at dusk, so Solarr didn’t play much of a role.

While in prison, the villainous Ulysses Klaw read about Solarr. He had contacts of his break King out of prison, so King could in turn defeat the security measures holding Klaw. Solarr then worked as a murderous messenger for Klaw, presenting an ultimatum to the Avengers while protected by solid sound bubbles.

However, the Black Panther (T’Challa) deduced an important part of Klaw’s plan and took him out. With the solid sound bubbles suddenly vanishing, Solarr plummeted and was knocked unconscious.

In 1977, Egghead again enlisted Solarr and Rhino. As the “Emissaries of Evil”, they were forced to work for him lest Egghead’s machines kill them both. Egghead was after a mystical gem called the Star of Capistan. Mistakenly thinking that Doctor Strange had it, he sent the Rhino and Solarr against the Defenders.

Solarr performed well – he took out Nighthawk (Kyle Richmond). He nearly fried Dr. Strange. He snared Power Man (Luke Cage) into molten asphalt. However, he then realised that the Defenders and Strange didn’t have the jewel, and retreated.

Egghead teleported his men away from the Defenders. Once he did locate the gem, he teleported them in. However, the Emissaries were quickly overrun by the Red Rajah. 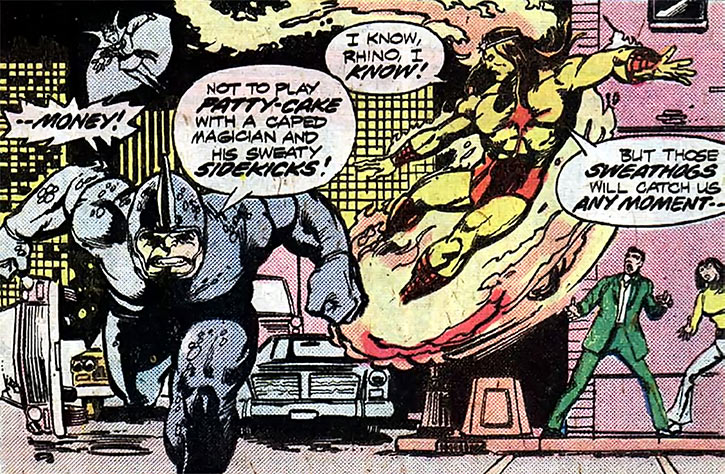 Solarr was held in a Federal pen for a time. But by 1979 he had been transferred to Project: PEGASUS for improved containment and scientific analysis.

Their deadly ambush against Superman was only narrowly foiled by the Vision (“Victor Shade”). Solarr was then returned to his normal time and universe, likely without memories of this adventure.

Solarr was accidentally freed when Wundarr drained the power out of several PEGASUS containment cells. King’s attempts at assaulting Wundarr from behind didn’t work, so he instead focused on escaping. Solarr also accidentally managed to free Klaw so they could team up.

They were chased by Quasar, the Thing, Giant Man (Bill Foster) and security guards. Solarr managed to keep them at bay for a good while, but Quasar siphoned off the energy within both King and his Egghead-built amplifier.

Mere hours later the complex was badly damaged by the Nth Man. Solarr thus escaped from PEGASUS after all.

In 1982, Solarr made his comeback with a simple mob contract in New York City, to rebuild his rep. He was to kill ex-mobster “Peepers” Scanlon before Scanlon talked.

However, Solarr ran into Spider-Man (Peter Parker) and Daredevil (Matt Murdock). Despite having been badly wounded in a previous case, Spider-Man narrowly took Solarr down. King was returned to Project: PEGASUS.

Wherre’s Sláine when you need him ?

In 1985, another incident at PEGASUS opened some cells. Bres of the Fomore (a sort of Irish Loki figure) was thus freed. He started toying with guards and inmates.

Solarr was freed – apparently, he was in the next cell over. However, he seemed addled and had trouble standing. It is likely that he was kept sedated, given his previous escapes.

Bres had killed and zombified several guards. Spotting one, Solarr burned him to a crisp. However, the corpse rose again immediately. Silas King panicked and ran, but the scorched cadaver strangled him dead.

Solarr can make the gem in his headband glow fiercely, but it’s just a SFX.

By 1979 there was an odd black outline around his eyes.

After his mutation activates, Solarr no longer plays with a full deck. He’s constantly ranting about powerful evil and cosmic might, demanding that everybody yield to him or die. He’s a casual killer, and whenever he’s on a roll he considers himself more godling than man.

King is an underhanded, angry, impulsive, murderous, power hungry bully. He’s prone to grandiose speechifying about his might. Yet he went along surprisingly well with Klaw. King even seemed loyal toward him for having employed him in the past.

Solarr knows the basics of hard sciences, and has a good vocabulary. Perhaps he dropped out of college to become a narcotics smuggler ?

“I stand below it, and the sun bathes me in power — power I can utilize and control ! Soon the Earth will be mine — because the Sun is mine !”

“Fools ! Fools ! Can’t they see the evil in me ? Can’t they see the power ? No, they never look beyond their own petty affairs, their own humdrum lives — while I gaze into infinity, into the mighty heart of the solar system. And I draw new strength from it — for I am Solarr, spawn of the Sun !”

(As an illusory giant) “I am Solarr… master of the solarr flame ! I have the power and the will to destroy you all as easily as a child swats a dying fly ! Accede to my demand, and survive…. Deny me — and PERISH !”

“You two have pushed me too far ! I hereby sentence you to DEATH BY FIRE !”

I don’t think anybody would bat an eye if he had been a Green Lantern (Hal Jordan) foe. He’d have worked with Goldface a few times.

Glue, Heat Vision, Flash, Flight and Regeneration have a Power Loss. Their listed APs are for a sunny Summer day. In most other circumstances, they are lowered by one AP.

An overcast day will shave another AP off. And a particularly gloomy day (or approaching dusk) will remove a third AP due to Power Loss.

If Solarr doesn’t have access to direct sunlight, he has to run on his reserves. This will occur whenever he is indoors, or underground, or has to be active between sunset and sunrise, or is covered in thick gunk, etc..

A simple roof over his head is sufficient to cut *direct* exposure.

Early in his career, that means Ammo: 06 shared between his Heat Vision, Flash and Glue.

The Ammo score is replenished within a single Phase on a sunny day (two or three Phases on a gloomy one), for the next time he’s cut off from direct exposure.

I love the night life

With Egghead’s amplifier, his Ammo restriction is lifted when indoors, at night, etc.. Or rather he still has Ammo, but the number is so high it won’t matter. He can remain powered for an entire super-battle, though it is likely possible to employ stalling tactics to force him to empty his reserves.

His Damage Capacity seemed to be renewed more slowly in this way, though. He Recovers two APs of it every Phase by drawing the amplifier’s reserves.

The Amplifier also lifts the effects of Power Loss.

When immersed in water, Solarr loses all his Powers except Flame immunity and his Current Damage Capacity Condition.

Once he gets out, he’ll need a Phase for everything to be fully Recovered (presumably more in overcast condition, unless he has his amplifier). If he’s doused in large quantities of water, he’s powerless for a Phase.

This is specific to water. Being covered in firefighting foam from an extinguisher simply counted as being cut off from the sun, and didn’t trigger the Loss Vulnerability. Yes, this is weird.

Since Solarr’s Damage Capacity will usually insta-Recover, you’ll seldom need to keep track of it. Except when he lacks sunlight.

Likewise, an amplifier will make the Ammo thing moot. So in practice it’s much simpler than it looks.

Solarr has the Glue Power since he’s clearly not spending Hero Points on a Trick Power when he does the “melt the ground under the heroes’ feet” thing. 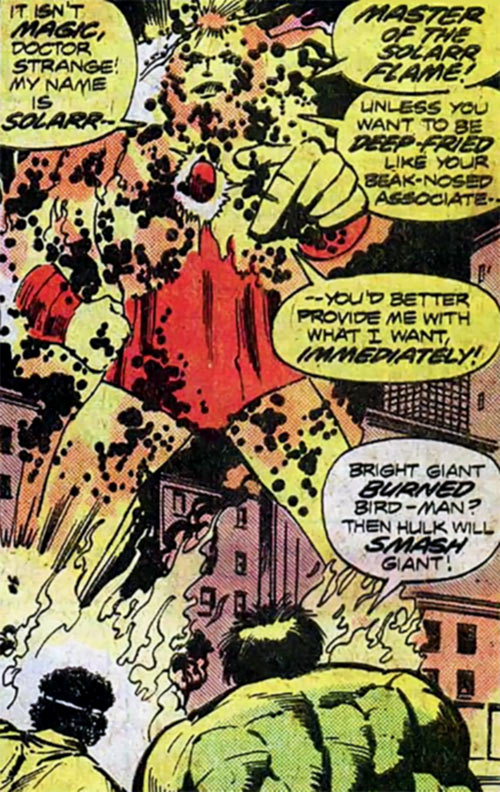 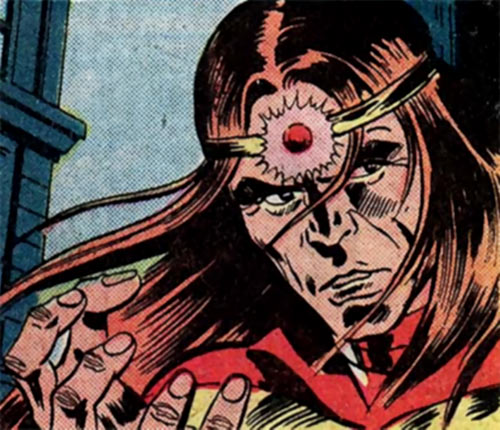