Solitaire’s bloodstream and tissues are full of nanites . These keep keep repairing his body, even when it is badly damaged. Most gunshots and the like will not really affect him. Although wounded and feeling the pain, he’ll be able to operate without hindrance. The wounds will also close quickly.

He has been documented surviving massed gunfire that resulted in about 40 impacts. However, that left him unconscious for three days. Furthermore, it is not believed that Solitaire could regrow organs or limbs.

Solitaire is also a remarkable acrobat and fighter, a skilled and intelligent detective and an excellent computer hacker. However, he is oddly easy to hit with ranged attacks.

Nicholas Lone is the son of Anton Lone, an exceptionally ruthless and powerful crime lord and businessman. Anton Lone chose a call girl to father him, so he could inherit his empire.

When Nicholas was about eight, one of Anton’s fights with the call girl ended in her death. While Nicholas loved his mother, she died while he was too young, leaving him traumatised and unable to remember her face or name.

Nicholas grew up lonely and empty, albeit quite intelligent. He discovered his father’s criminal activities as a teenager. That was about the same time he discovered the first home computers and BBSes. For months, he went online to gain information on his father’s activities, foiling some of his crimes. These mostly were deadly arsons intended as insurance scams.

However, when he first contacted a reporter with hot information, this journalist and a dozen innocents gunned down in a drive-by shooting. Anton Lone had discovered his son’s whereabouts, and made it clear more people would die if that continued.

Nicholas was broken by the slaughter. As a result he became the gossip pages’ favourite bored, rich brat. He drifted, dead inside. He more or less willingly committed suicide by crashing his car over a cliff whilst utterly drunk.

However, he didn’t die. His father’s men found him. Anton then struck a deal with a secret cabal of apparently alien scientists. These would inject his son with their rarest, most efficient nanotech culture. It worked. Nicholas survived unscathed, and became very hard to hurt. His father was delighted he could save his heir.

Nicholas Lone had been given his second chance at life. This time, he would use that gift to really fight his father. He designed the Solitaire identity, found a lookalike he sent in remote locations with orders to party and enjoy himself, and found new teachers in order to start his career. These built upon what he had been taught years before by Jinn, his father’s bodyguard. 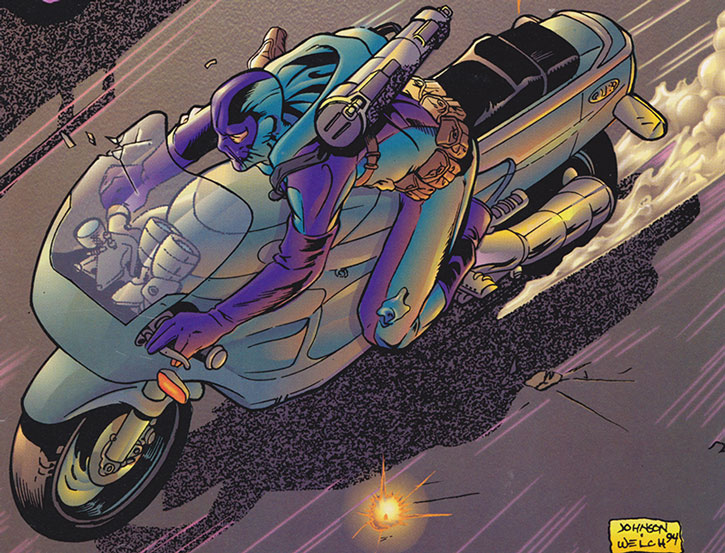 The masked Solitaire bitterly fought crime in the L.A. area. He concentrated his efforts against Anton Lone’s criminal activities. In a matter of months, he became a urban myth in L.A., seen as a defender of the defenceless and foe of criminals everywhere.

Although Lone’s empire was huge, he scored significant victories. These included defeating a sadistic mob king known as King Pleasure (who accidentally died), escaping several times from Jinn and his men through talent and clever manipulations, and taking down a strange monkey cult connected with Lone.

Then Anton Lone’s plans reached terrible proportions. He hatched a gambit in which he bought nuclear warheads, with the intend of destroying Los Angeles and the surrounding area.

Lone had access to special anti-radiation technology that would render Los Angeles habitable again within two years. He was planning to buy low after the detonation and sell when the real estate value would peak again later.

Solitaire became aware of that plot through a clever trick. He had little choice but to storm Anton Lone’s headquarter. He managed to snatch Anton Lone and bring him close to the detonation site, where Lone told him where the bomb was exactly, enabling Solitaire to disarm it.

Solitaire then tried to stop psycho criminals Double Edge and the Degenerate. But it became obvious to his agents so something was wrong with him.

Solitaire ignored any information or sentence that had to do with Anton Lone. When confronted by his agents, his mind started to play other tricks on him, creating phantom disturbances to draw his attention away from the struggle against Anton Lone.

Still, Solitaire tried to carry on. He heard about a team led by Jinn heading for New York. They were going to exploit the chaos around the Ultratech tower that Nuware’s CEO, J.D. Hunt, was about to unleash. The mission was to steal the best kept secrets of that corporation right before Hunt could.

Jinn’s team, being equipped with the terribly powerful weapons of the Fire People, was quite successful in appropriating Ultratech’s secrets. Solitaire failed to stop them, and was badly wounded during the fight.

This is when Nicholas Lone discovered the other function of the nanites in his blood. They made him loyal to his father. The more he got wounded, the more the nanites could get a hold on his mind. While he physically survived the New York fight, he was now Anton’s obedient son.

Meanwhile, Anton Lone used the stolen Ultratech secrets. He strongarmed JD Hunt into giving him access to the secrets of wetware, the tech that could make ultras . With the help of his son, Lone created three superhumans. These had wetware-based powers and empty, loyal minds.

But the nanites’ conditioning started to break after a few days. Thus, Nicholas Lone went on a quest in L.A. to understand the ever-fleeing memories that were plaguing him. Finding his old HQ, he remembered all about being Solitaire.

Nicholas had been followed by Jinn. But they struck a deal, and Jinn would say nothing about Nicholas being Solitaire. Solitaire then made contact with the scientific nanotech cabal working for his father. He paid them to remove the nanites from his body in order to regain his freedom of thought.

Nicholas Lone is not as muscular as most superheroes. He has an athletic but not bulky build.

His gaze is often remembered by the people who see him. It is full of pain and loneliness, and burning with a desire to do good.

At first glance, Solitaire is your standard acrobatic vigilante – although he tends to focus on his father’s empire.

However he tends to fight more with information, legwork and cunning than raw power. He has something of a talented higher class dilettante fighting crimes rather than the style of a Wildcat, a cop or soldier.

“I used to be you. Then I woke up and saw myself in the daylight.”

Drawbacks:
Secret ID, Misc.: Attack Vulnerability (-2CS to OV against ranged attacks), Misc.: The nanites will slowly give him a CIA to serve his father ; the more they are used, the more Solitaire falls under his father’s control. When the full CIA is triggered, it also induces amnesia.

After he had the nanites removed by the nanotechnology cabal, Solitaire lost his Powers and the mind control Drawback. His BODY likewise became 05 but he lost his Attack Vulnerability.

However, the nanites were transferred to his costume, which has the following stats : COSTUME [/BODY/ 06, Invulnerability: 07, Regeneration: 08]

Solitaire has a strong network of agents, à la Shadow, in the city of Los Angeles. Some of the core agents and their notable skills are : 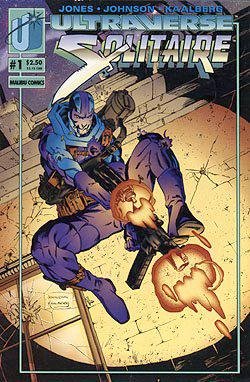 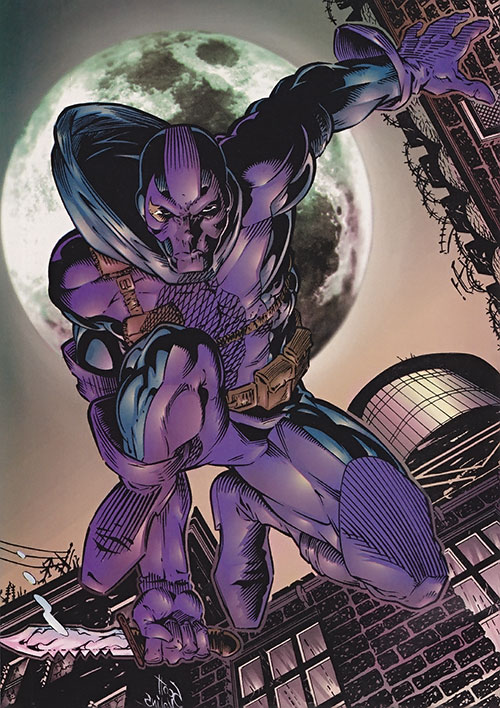