The Darksoul makes Hellstorm physically powerful, with peak human strength, and allows him to project soulfire from his hands. When he wields his netheranium trident, his soulfire is more powerful and long-ranged, and he can use it to fly.

Hellstrom is a highly skilled exorcist and demonologist, with superhuman intuitions into the occult due to his nature.

Daimon Hellstrom is the son of Satan himself and of a mortal woman. He and his his kin (a sister and, later, a half-brother) were sired as part of an unfathomable plan. It might have had to do with the creation of heirs if something went seriously wrong.

Although his big sister knew all along, Daimon and his mother where unaware of the true identity of Daimon’s father. This lasted until Victoria accidentally interrupted an occult ritual. She went insane from the shock and died shortly later, while Satan and Satana fled.

Daimon was left an orphan, and went on to study for the priesthood. A short time before he was ordained, he received a letter telling him he had inherited his father’s house in Massachusetts.

I chase the Devil

In this house, which he hadn’t seen in years, he discovered the diary of his mother and learned everything about his parentage. Satan then summoned him to Hell to have a talk with him. But after having been returned to Earth, Daimon decided he would fight his father and his servants.

Immediately plunging back into Hell, he incited a revolt against the devil and came away with a mystical trident and a chariot. However he also discovered the Darksoul inside him, and the urgent need of forever controlling that raging, cruel beast within him.

The Son of Satan went on to become a fighter against demonic evil as well as a renowned occultist and visiting specialist in parapsychology at a St Louis college. He also crossed paths with his sister once, and attempted to murder her.

Daimon Hellstrom helped the Defenders a few times. During the fight against the Six-Fingered Hand went on to become a full member, despite his reservations. Among the Defenders he met Patsy Walker, aka Hellcat, who became his wife.

He later confronted his father and vanquished him. Shortly after the Darksoul was ripped from him by the Miracle Man, who wanted its power as his own. Miracle Man was defeated, and Daimon was free of the Darksoul.

Hellstrom went on to become a leading demonologist, as well as, along Patsy Walker, a famous occult investigator.

The first illustration are his classic “Son of Satan” togs ; below is the more civilian suit he often wore after he got rid of the Darksoul. Then is the bright red costume he wore after he “retired”, as seen when he helped the West Coast Avengers.

Hellstrom is preternaturally arrogant, and does not go along well with either demon or humanity. He has a short temper, fights to kill and vents his anger in a single-minded combat against demons. He’s reluctant do fight for other causes.

He’s highly charismatic and quite attractive, but has little respect for women and never hesitated to slap any female annoying him. At best, he’s curt and driven.

In the end, he does fight the good fight, destroying demons and attempting to protect humanity. But his means are ruthless, his nature bloodthirsty, and when he tries to act in a sensitive way if often falls flat.

“Mr. Manners… this is not easy for me to say… nor will it be for you to accept. But your daughter’s problem is not psychological. Unless all my instincts are in error, she has been possessed.”

Hellstrom could be the son of the actual Satan (Lucifer Morningstar) in the DCU, and would have retired when his father did. He had a extremely violent rivalry with Mister E.. He also helped the Global Guardians several times and later went on to marry Godiva.

Drawbacks:
Serious Rage, SIA to arrogance and the equivalent of a Minor Psychological Instability (Darksoul).

Equipment:
Trident [BODY 15, EV 04 (06 w/STR), Flight: 03, Power reserve (Magic blast, magic sense, true sight, all rituals in which it’s not a component): 03, Limitations: Flight only usable by someone with the Magic blast power (-1). As an added bonus, the Trident can hold Satan himself at bay and prevent him from harming the user, which I’d consider a plot device].

Rituals:
Hellstrom has numerous rituals, including :

The Darksoul manifests as the pentagram mark on Daimon’s chest and powers ; it also manifests his more demonic aspects. When the Darksoul is gone Hellstrom has one fewer AP of STR, no Magic Blast, no Rage, no SIA and no MPI.

As long as he has the Darksoul, the Son of Satan can command a chariot drawn by three demonic, flying horses called Hecate, Set and Amon. The chariot as a whole has the following stats :

Bonuses and Limitations:
Dimension Travel only to and from a pocket dimension (distance: 01) where they await the Son of Satan’s commands. 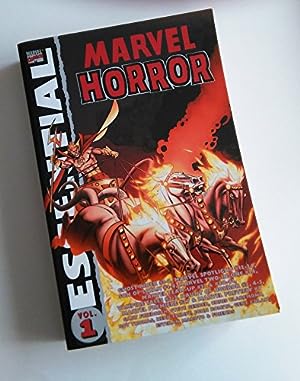 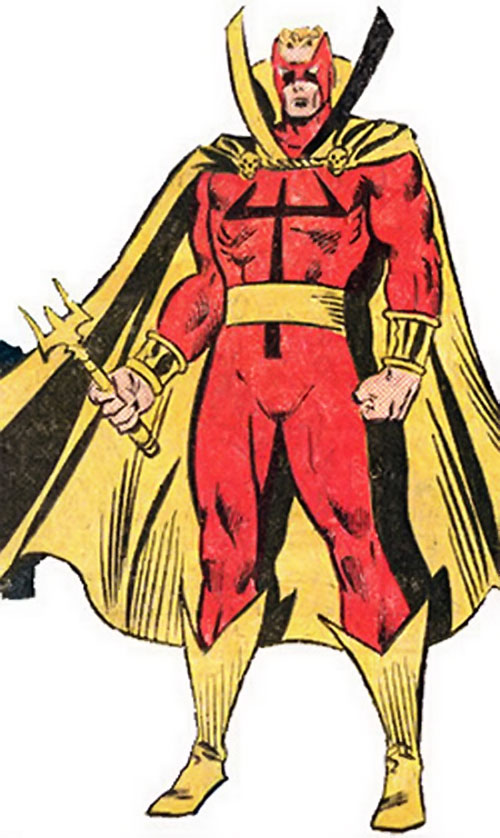 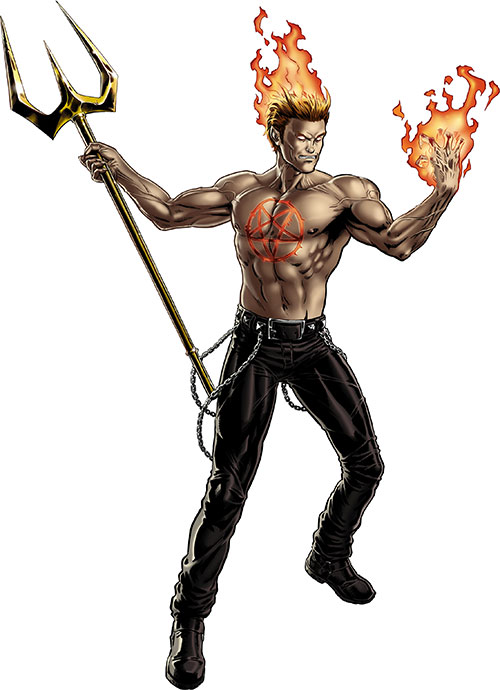