Songoku’s past was a mystery at this point. He lived his child years at the forest with his grandfather Songohan. His grandfather died one night of full moon because of the attack of a giant King Kong-like creature he didn’t saw (in fact, himself transformed into Werewolf).

From that moment on, he considered the dragon ball with four stars he had as his grandpa’s soul.

Goku met Bulma when he was 12 years old. They soon became friends and began searching the Dragon Balls (Bulma wanted them to ask Xeron a handsome boyfriend ; Goku just thought it would be polite to go with her).

After lots of adventures and meeting Ulong, a pig-o-morphic creature who could polymorph at will, and Yamsha and Puar, a bold thief of the desert and his bunny-like assistant, also shape-changing, they were imprisoned at Pilaf’s castle.

Pilaf was a dwarf, evil, blue-skinned villain who wanted to rule the world with the power of the Balls. But Ulong asked for his wish first, and Pilaf got really angry, trapping Goku, Bulma, Ulong, Puar and Yamsha inside a crystal cage, so they would die next morning. Goku transformed into the Werewolf saving them and destroying the castle.

On the next morning Goku went to Kame Senin’s island. Senin had awarded him with the Kinton cloud for returning him his lost turtle, because he wanted the old master to train him. With a bald boy named Krilin they began the training, that ended at their first Great Martial Artist Tournament.

Jackie Chun (in fact Mutenroshi disguised) won against Songoku in the finals, when Goku transformed again into the Werewolf and Kame Senin apparently destroyed the moon to revert the transformation.

Then, Goku began the searching of the fourth ball, and by doing so he began his struggle against the evil Red Ribbon Army (see the Red Ribbon general writeups). It ended when Songoku alone attacked the Red Ribbon Main Headquarters, defeating the Red and Black Colonels and dispersing the rest of the army.

Songoku wanted to summon Xeron to resurrect Upah’s father, Borax, killed by assassin Tao Pai Pai, but the last one of the balls didn’t appeared at the radar.

So they went to met Baba the Seer. Since they couldn’t pay as much as the witch recquired, they decided to fight for the witch powers. They faced Baba’s Fighters and finally defeated them, including the fifth mysterious man, who knew Mutenroshi’s trademark Kame-Hame and wore a bunny mask.

When he accidentally snatched Songoku’s tail, he surrendered and showed his true identity: he was Songohan, returned to the Earth for one day, a privilege Baba could grant due to her Afterworld’s connections.

Goku resurrected Borax and began travelling around the world without the help of the Kinton Cloud as the Kame Senin advised him. It would be a great training to him, and an excellent preparation to the next Great Martial Artist Tournament, in three years.

During the three years, Goku became stronger, and he met new people, as a strange three eyed man named Ten Xin Han and his buddy Chaos, who defeated him with surprising ease. And, three years later…

Songoku is a short, 15 years old boy with a wild black hair impossible to comb. He wears the Kame Senin’s school’s kimono: a red two-piece kimono with a black silk belt. At his back, Songoku uses to wear his red Bo-stick, the legendary Nioi-bo, that stretches and shrinks at command.

Pure hearted and innocent almost to painful extremes, Songoku can be sometimes too blunt in his naive comments and actions, as he has no knowledge and little respect for urban conventions.

Bonuses and Limitations:
Growth is always on and Already Factored In.

Note:
Returns to its normal form if the full moon disappears or if its tail is removed. When reverts, he has a current BODY condition of 0 APs. 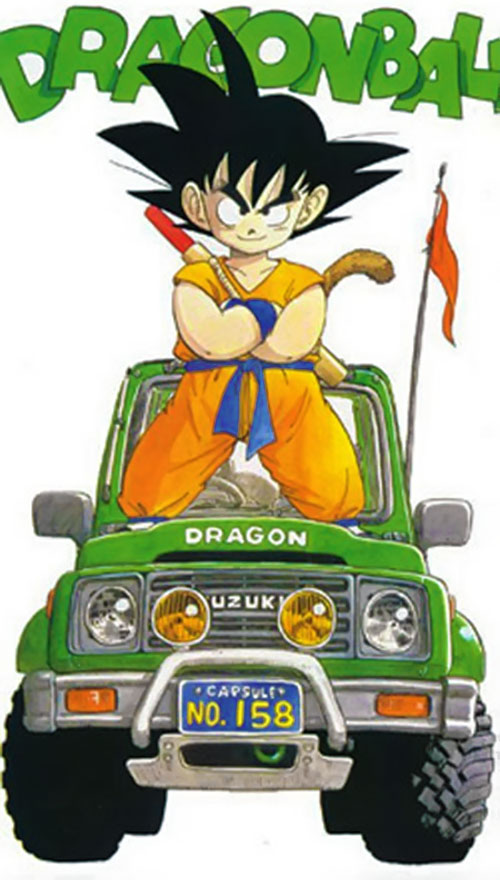