The best fighter in his Earth, along with Piccolo Jr.. Besides the usual powers shown by the other high-level fighters (Superspeed, Energy Blast, Jumping, Air Walking, Illusion, Invisibility) Goku has mastered others, like:

But will that be enough against an alien invasion ?

After meeting Chaos and Ten Xin Han, young Songoku fought at the 22nd Tenkaichi Budoukai, the Great Martial Artist Tournament. He lost the final combat (but matched the fight) versus Ten Xin.

On the following dinner to celebrate the combat, Krilin was killed by a green devil. It was a minion of Satanas Piccolo, Master of Devils that Kame Senin, his deceased master Mutaito and the now twisted Turi Senin fought 200 years before. Piccolo had been encased by a secret technique and now Pilaf had freed him. Songoku was also defeated by the minion.

A wild huntsman named Yajirobai helped him to climb the Sacred Tower again. There, Songoku recovered and managed to drink True Sacred Water. But old Piccolo had found the 7 Dragon Balls and wished to be forever young again. When he had his wish accomplished, and thus recovered all his might, he killed the Dragon Sheron to prevent further wishes.

Chaos, Krilin and the Kame Senin died while trying to reimprison the demon. Piccolo announced the world it was going to destroy every country that wouldn’t bow to his will. Songoku fought Piccolo and managed to destroy him with his last energies, but he couldn’t stop him from sending his son away inside an egg.

A conversation with God

Goku went to the Sacred Tower with his magic Nioibo staff. There, Karin told him to go even higher. How? The staff put in a hole of the roof of the Tower was the way to arrive to God’s Palace.

There he met Mr. Popo and the Almighty, who was in fact the good half of Piccolo. As he hadn’t died it meant that Piccolo was somehow alive. Thus, Songoku remained on the Palace to train for the next Tenkaichi Budoukai, where Piccolo Jr. would fight. The Almighty also resurrected Sheron (and Chaos, Krilin and the Kame Senin) after Mr. Popo glued together the pieces of his statue.

When the 23rd Tournament arrived, diminutive boy Songoku had turned into a tall, handsome young man. His increased level of concentration that allowed him to strike even invisible enemies, just by feeling their energy and forgetting what his senses told him.

In a devastating final that destroyed the surface of whole Papaya Island he fought Piccolo Jr.… and won. But even against such a fearsome enemy, Goku couldn’t kill him (that would had, also, killed the Almighty). He helped him to recover, and Piccolo flew away.

The coming of Radix

On that tournament Songoku also married with Xixi, the daughter of the giant Ox Satan. After the tournament there was a time of peace on Earth during which Songoku and Xixi rescued her father from the burning flames of Mount Satan. They had a son, who was given the name of Songoku’s foster grandfather: Songohan.

Then a terrible alien menace arrived to Earth, then. First was Radix, Songoku’s brother,. He told Songoku that he was alien, from the Saiyan race. Goku had been meant to destroy or at least conquer the Earth, when he arrived to it as a baby. But after baby Songoku fell a cliff and bashed his head, the reuslting amnesia turned the Saiyan warrior into an innocent, nice boy.

Radix defeated the combined forces of Goku and Piccolo Jr., and only through supreme sacrifice, grappling Radix while Piccolo blasted them two, they could win. Songoku could be resurrected with the Dragon Balls, but Radix’s friends, saiyans Vegeta and Nappa, were to arrive to the Earth in a year.

Thus, Goku decided to train in the afterworlds.

Not extremely muscular, but well built. Long black hair in impossible wild waves. Red kimono without sleeves, from the Kame Senin school, with blue shirt and bracelets and black boots.

Innocent, playful, bold. Take Mazin’ man and mix him with Superman. Although the grief menaces Earth is starting to live and his responsibility towards Chichi and Songohan II are making him more mature than before. Anyway, his stay at the Afterworlds is going to show he’s still the great joker, playing around with gods and devils, much to their astonishment.

Goku refused to be the Almighty’s successor.

“I promised to marry you, Chichi ? Oh… well… then I will”

“I’ve saved you for two reasons: if I’d let you die the Almighty would had also, as he’s God. He can’t kill himself as suicide is a sin, but he could let you die. The other reason is I’ve never enjoyed a fight so much as with you… and I want we may repeat in the future !”

After his fight with Piccolo and the arrival of Radix there’s a blank space (partially covered by 1 or 2 of the OVAs) that allows for Dimensional travels of this Goku to the DC Universe.

At his present stage, he would be a suitable JLA member, where he could perhaps fill a better “Dyonisus” slot than Plastic Man. He could also be a good ally for Superman and Superboy, or help Superman against the likes of Death-Rite, Mongul and, perhaps, dying at the hands of Doomsday (instead of Radix) instead or before Superman did.

Combat Techniques:
The Sun’s Bite [Flash 12; Casting Time: 1 AP; Requirements: Needs a source of bright light, like the sun]
Air Walking and Energy Blast are also techniques, but Goku automatically succeeds on them, thus are treated like Powers. For those unfamiliar with the term, Combat techniques are much like Occult Rituals, but based on the Martial Artist skill.

Goku’s Gang as a Connection represents the following people: Bulma, Chichi, Yamcha, Krilin, Kame Senin and turtle, Ulong, Puar and Blanche (Blanche’s connection can never be higher than Low through this Group Connection). If the connection is High, you can consider to also have a Low connection to Iajirobai and the Tenkaichi Budoukai. 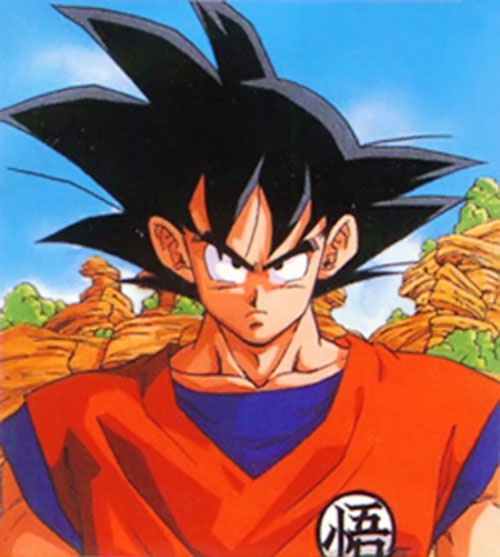 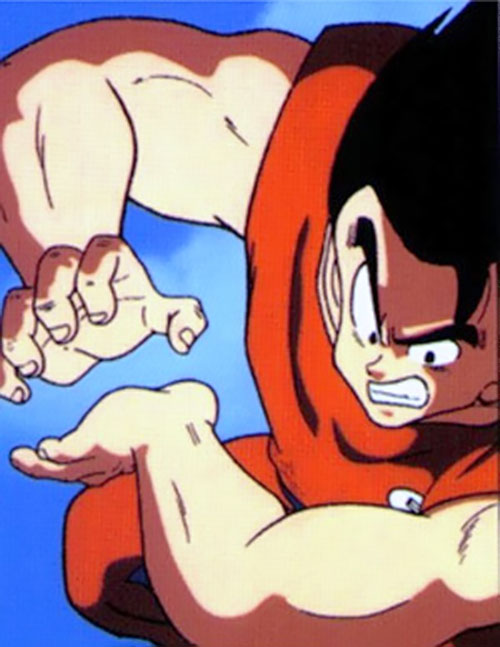