About the moon of Luclin

Luclin is the major moon of Norrath. Norrath is the world where the landmark Everquest I MMORPG  takes place. Luclin is named after the secretive goddess of shadows , who considers this moon her domain.

Luclin — the lunar body — is no desert of grey rock plunged in hard vacuum. It is a strange environment, where both the surface and the vast caverns have oft-bizarre fauna and flora, and a full range of geographic features. Luclin’s atmosphere is identical to Norrath’s, though perhaps a wee bit thinner. And the caverns are usually large enough to breathe in without issues.

The moon does not rotate. One side is baked with constant light, one light plunged into perpetual darkness. The band of twilight in the middle is the most habitable part.

Luclin has its share of primitive and/or semi-sapient species – the sonic wolves covered in this entry, but also various races of giant insects, little grey Tegis, etc. It even had its own great culture, that of the Akheva, four-armed sapient beings who are the chosen people of the goddess Luclin.

The Thought Horrors who live deep under the surface and in the shadows were also chosen by Luclin, though their accomplishments are less impressive.

Many of the cultures of Luclin are actually refugees from Norrath. When employing the teleportation magic of the Combine Spires, reaching a teleportation spot situated on Luclin is not much more onerous than reaching a similar point on Norrath. Distance is not the most relevant variable. Thus, during Norrath’s thunderous history, several waves of refugees came to Luclin, their last frontier.

The oldest and most sinister were the Shissar, the evil giant serpent-men of antiquity. These were fleeing annihilation at the hands of the angry god of terror. When the famed Combine Empire, remembered as a golden age, floundered in civil war, the Katta loyalists also fled to the moon. But they were pursued there by their enemies of the Inquisition.

A gaggle of Kerran cat-people later ended up teleported here by accident. That happened during the civil war on Erudin between necromancers and other schools of magic. Later still the secrets of the powerful Nexus would be unlocked, allowing those using the old Combine teleportation spires to easily reach the moon of Luclin .

Sonic wolves are strong, dangerous, wolflike predators. Operating in perpetual darkness they do not have eyes. Instead they rely on a bat-like sonar and an extraordinarily keen sense of smell to hunt.

Travellers will be relieved to know that sonic wolves do not usually operate in packs. It is more common to find a mated pair, possibly with cubs.

There are bad news, though. A pair can be as dangerous as a pack, since sonic wolves evidence startling intelligence. They fight in a tactically sound way, will retreat if needed (or worse, feign retreat and double back), are capable of laying ambushes or even to fake being wounded, etc. 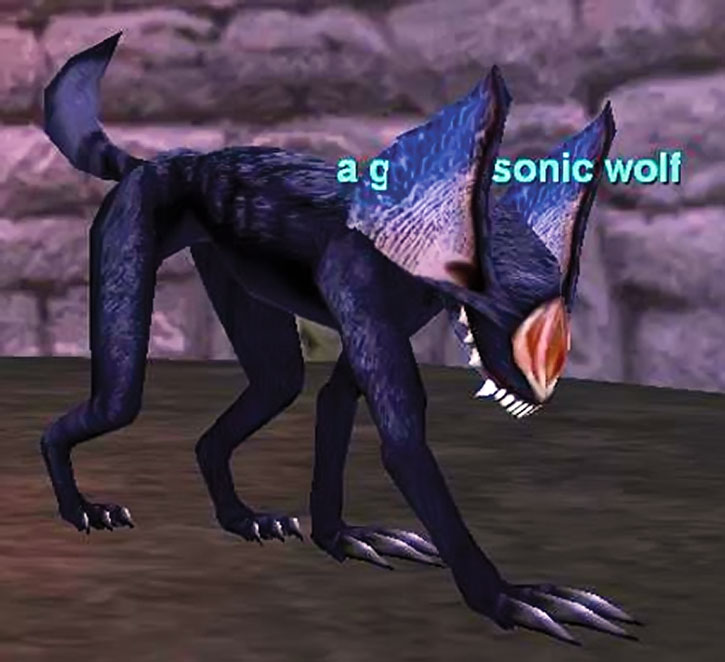 Those attacked by sonic wolves should assume that they are facing sapient opponents, not animals.

The other bad news is that sonic wolves, when faced with something threatening all of them, will form packs. Those packs will form clans if needed. Clans may form armies if necessary, and those will be at least as disciplined and well-coordinated as packs of wolves.

Sonic wolves are believed to be able to communicate with each other via sonar pulses.

Some sonic wolves wield natural magic and can cast spells. These are often shaman-like hexes having to do with disease, fire and ice, and apparently some divination techniques giving them intimate knowledge of events in the area.

Sonic wolves are a species of predators on Luclin. Being highly adapted to perpetual darkness, they live on the dark side of the moon. Thus, sonic wolves can be found in numerous areas of the Tenebrous Mountains, the Grimling Forest, Hollowshade Moor, Shadeweaver’s Thicket, etc. 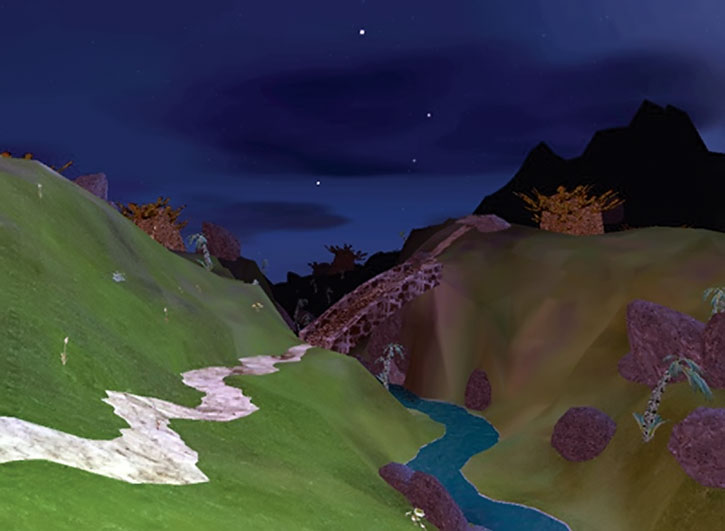 While sonic wolves live largely like normal wolves, they are no mere beasts. This is particularly evident in the Moor, where the wildlife fights against the subterranean grimlings for control of the area.

Both the sonic wolves and the local species of owlbear evidence a level of coordination and determination that is distinctly unbeastlike. As a result, they have stalled the efforts of the grimlings for years. Yet they have also been known to fight each other, as the sonic wolves do not want the owlbears to have their turf either.

Sonic wolves are larger than normal wolves, with a gangly countenance. They do not have anything resembling eyes. But some features from a bat seem to have been melded into their face – with bat-like ears and a bat-like snout. These bat-like features are usually brightly coloured, contrasting with the much drabber fur covering the wolves’s body.

Sonic wolves are more or less sapient . They probably exist a bit above the level of a dolphin. For instance, they have something that can clearly be called a language. 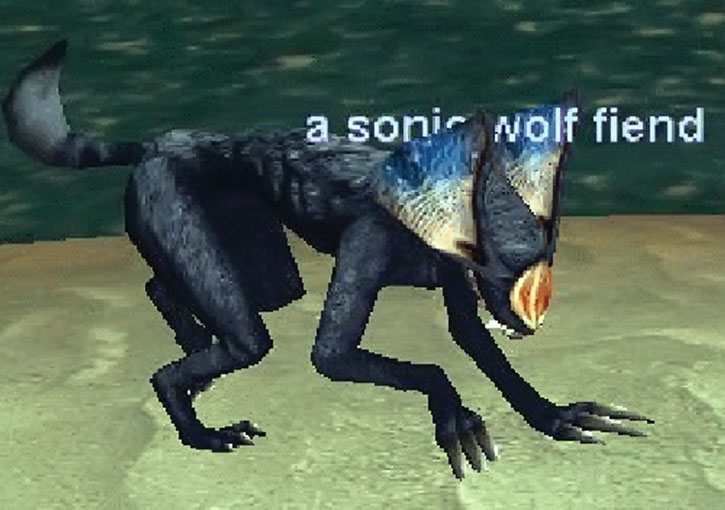 Those who can communicate with ordinary wolves can learn the lingo of the sonic wolves. That includes vampyres and certain spiritists such as the late, great Vah Shir explorer Khati Sha. Then they can have sophisticated interactions with sonic wolves. Such as negotiating safe passage in exchange for information or hiring them as guides or guards in exchange for food.

Some vampyres have a working relationship with sonic wolves. And sonic wolves from the Moors happening upon travellers who could speak with them have been known to… make offers to hire mercenaries in their fighting against the grimlings and owlbears. Proposed payment has included weapons found on grimling corpses, directions to acrylia veins and the like.

Sonic wolves can easily be recast as mutants, aliens, cyborgs or pretty much anything, really. That’s part of their charm.

Advantages:
Misc.: Sonic wolves have no eyes and are thus entirely immune to visual attacks.

Connections:
Other sonic wolves (Low, usually relatives and friends but some suspect that the sonic wolves may have nations of a sort).

Drawbacks:
Attack Vulnerability (-1CS OV/RV vs. sonic attacks), MPR (completely blind, though with their other senses that is hardly an issue), Misc.: Wolflike body (quadrupedal, no manipulative appendage, etc.). 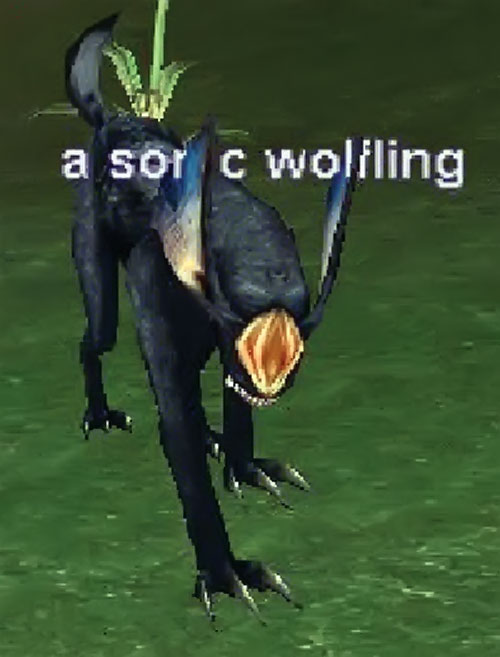 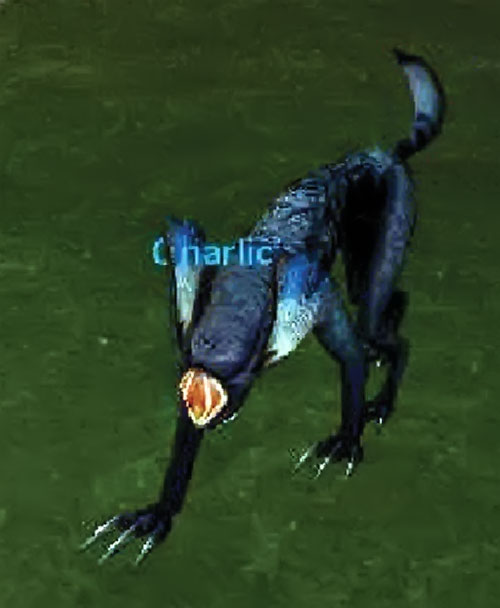