These are undead shock troops, which is certainly convenient to have.

This lot appeared during the early run of the 1999 volume of JSA.

The Sons of Anubis are spectral military units that can possess and animate corpses.

As they emerge they will magically dress the corpses with pseudo-Egyptian (think Stygia) garb, and summon bardiches, poleaxes, ranseurs, halberds, glaives and the like to fight.

The mummified corpses are strong and martially proficient, and can employ decent tactics. Examples include :

The Sons of Anubis are undead shock troops.

In 1999, they allied with the Dark Lord to prevent the Cycle of Khepri – that is, the creation of a new Doctor Fate using the artefacts associated with Nabu. Green Lantern (Alan Scott) mentioned having encountered them before. 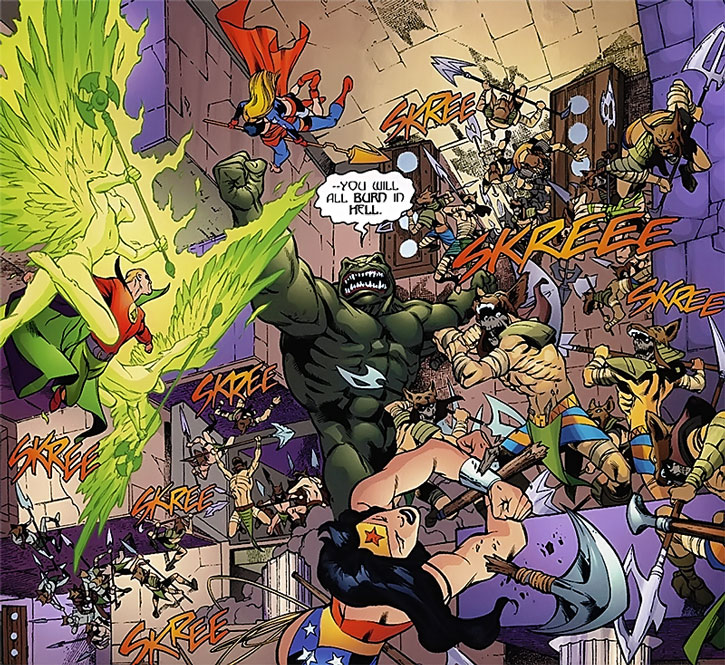 As they chased Fate (Jared Stevens) to take his Nabu-enchanted knife, the Sons ran into the JSA and were destroyed.

Undeterred, the spectres went after potential reincarnations of Doctor Fate in British Columbia, Tibet and Italy. Guided by the Scarab, the JSA thwarted them, but the Dark Lord briefly captured the fated child.

When the Lord of Chaos named Typhon took over the Tower the Fate, he had the Sons of Anubis defend the magical structure. However, a joint JLA/JSA team came to retake the Tower, and the Sons were routed after Typhon fell.

The Sons look more like mummies than zombies, as befit undeads with Ancient Egyptian roots. 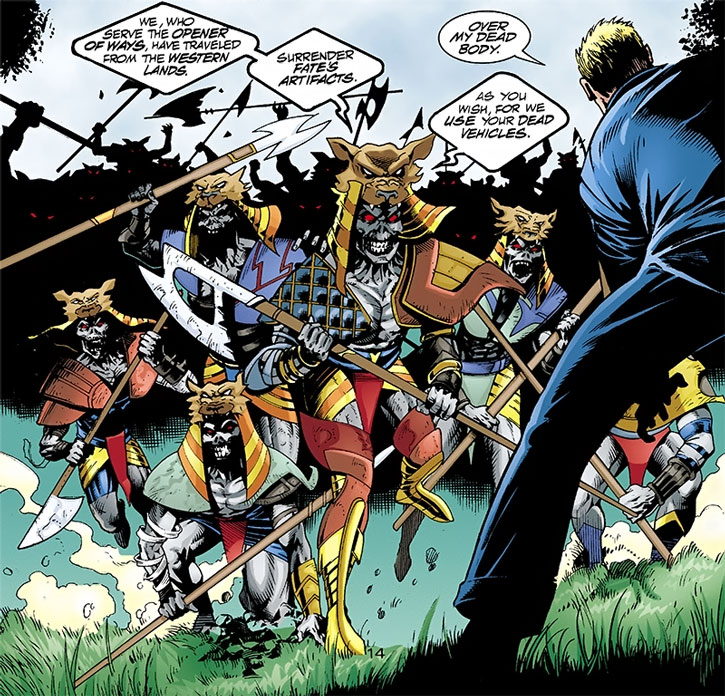 Undead leader: “We, who serve the Opener of Ways, have traveled from the Western lands. Surrender Fate’s artifacts.”
Sand: “Over my dead body.”
Undead leader: “As you wish, for we use your dead vehicles.”

Connections:
An unclear range of demons, hellspawns, evil mystical lords, etc.. But probably nothing at High and only the leaders have those connections.

Drawbacks:
Strange Appearance, MPR (if their current host corpse is destroyed, they cannot use Self-Link (Animate Dead) for the next 20 Phases).

Equipment:
Polearm [BODY 04, Enhance (EV): 03 (cap is 06), Descriptor: Usually piercing and slashing, but quite varies depending upon the head(s)].

While it is not demonstrated, it is quite likely the Sons have Partial Attack Vulnerability (Flame, -1CS RV). Mummies usually do. 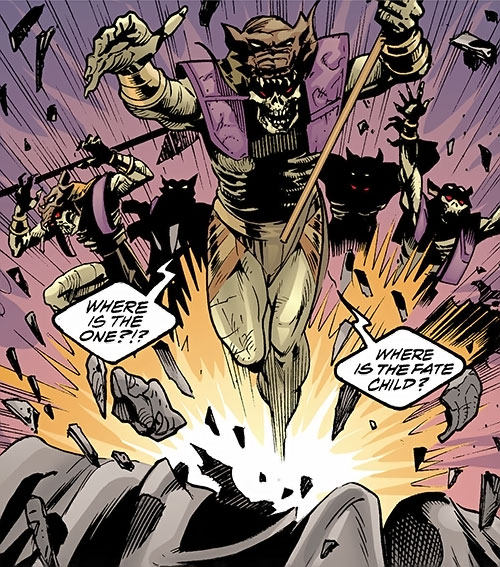