“By the power of Grayskull, let it be done. Enter the pool of power, only the purest and the gentlest may have the power of Castle Grayskull. If the Castle accepts you, you will emerge changed. Enter.”

The Sorceress appears in the 1983-1984 He-man and the Masters of the Universe cartoon series.

She’s a powerful magic-wielding sage based out of the ancient Castle Grayskull.

For more context, we recommend that you first read these two articles :

The Sorceress dwells within the old fortress, Castle Grayskull.

Within these walls, she is one of the mightiest beings on Eternia. Her magic allows her to do practically anything she can imagine. She is strongest when her magic is used for scrying and travel.

She often knows what has happened before her allies ask. It’s rare for the Sorceress to not have the answer. Her knowledge of hidden or magical things is unmatched.

In DC Heroes RPG terms, she has a very high Occultist Skill. He-man and his allies seek her advice often.

Outside the castle, the Sorceress’ form changes to that of the falcon, Zoar. She retains her mystic senses and telepathy in falcon form but loses all her other magical abilities.

Skeletor and the forces of evil do not rest and Castle Grayskull is forever under attack. The Sorceress must stand ready to fight any would try to take the castle and its secrets. 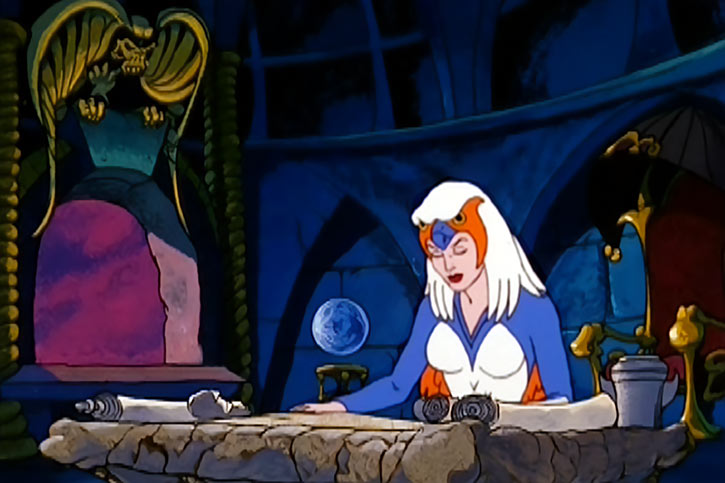 A long time ago, a power-hungry wizard, Morgoth, sought control of the universe. He became an immortal giant with terrible power.

However, the ancients trapped him within a prison zone.

In more recent times, Morgoth secretly broke free, determined to conquer Eternia. This time, he would have help. He gave the location of Eternia to a planet-conquering army, which had been terrorizing hundreds of worlds. This was the evil Horde.

Teela Na grew up in the quiet village of Noella. But Noella became the Horde’s first target.

The village fell to an advance force in less than an hour. Its people were taken prisoner.

Teela Na escaped, then searched for the mythical Castle Grayskull. It was supposed to exist somewhere in the great waste. 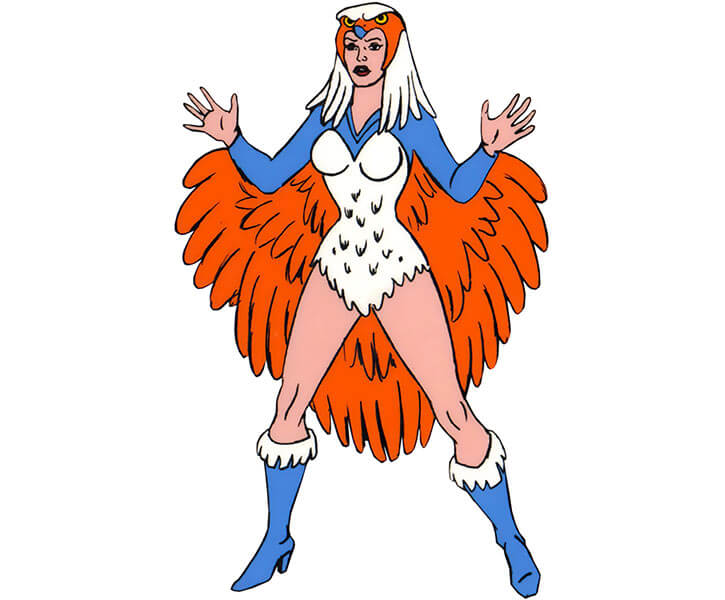 Succeeding, Teela Na met the Sorceress, Kuduk Ungol. A bargain was struck. Kuduk would make Teela Na the next Sorceress of Grayskull, which would give her enough power to save her village.

However, once she took the role of Sorceress, Kuduk would be relieved of her duties. And Teela Na would never be mortal again.

Teela Na entered the pool of power and emerged, Zoar the falcon.

The new Sorceress of Grayskull returned to Noella. With her new powers she drove out the invaders and re-imprisoned Morgoth.

Years later, Teela Na married and had a daughter. But her husband died. The Sorceress took her child to the mountains to raise her.

A young warrior named Duncan (aka Man-At-Arms) was walking through the Evergreen forest. He had received a strange psychic signal drawing him urgently through the woods. He saw a falcon overhead, Zoar. The raptor was beset by Mer-Man, sent to sacrifice the mystic bird to a sea demon.

Zoar was protecting something in her nest. Man-At-Arms intervened and defeated Mer-Man. In the nest was the Sorceress’s infant daughter, Teela.

The Sorceress could not raise her child while in falcon form. Furthermore, Castle Grayskull just wasn’t safe for a kid. The Sorceress had come to the hard realization she was incapable of caring for and protecting her own daughter.

And so, Man-At-Arms adopted Teela as his own.

The Horde attacked Eternia in force.

Before they could be repelled, Horde leader Hordak kidnapped the infant, Princess Adora. Man-At-Arms and the Sorceress were unable to stop the fleeing villain.

Using Grayskull, the Sorceress searched for Adora for many years. She then used her magic to erase all memory of the Princess from everyone except herself, Man-At-Arms, and the King and Queen.

Teela Na had another task in her role as Sorceress. She would choose someone to take on the mantle of Champion of Grayskull – and give them the power of He-man.

With the advice of Zodac and the Spirit of Grayskull, the Sorceress chose Prince Adam. 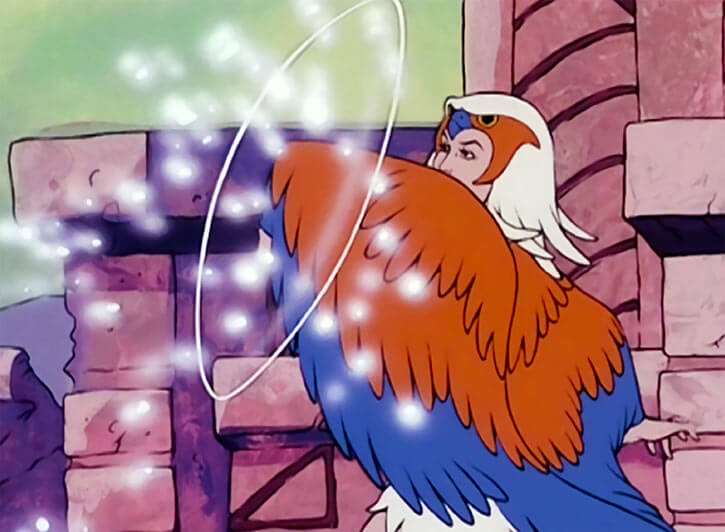 The Sorceress summoned He-man to Castle Grayskull after Morgoth attacked the Palace. She recognized his signature attacks and prepared to face him again. She revealed a crystal that allowed her to keep her true form outside Grayskull.

Along with robotic horse Stridor, Man-At-Arms latest invention, He-man and the Sorceress traveled to Dark Mountain.

Morgoth soon breached the prison zone. He dropped a huge gem to the ground, his link to Eternia. A barrier rose around it, which no living creature could pass. While Morgoth engaged the Sorceress in battle, He-man was unable to break the force field.

But Stridor could overcome the barrier – as it was not alive. Though Morgoth blasted Stridor with lightning it was able to kick the gem toward He-man. Our hero smashed it, preventing Morgoth’s return.

After Stridor’s act of courage, He-man carried it all the way back to the palace, so Duncan could repair it. Stridor became fully sapientCapable of intelligent reasoning. and was set running free.

The Sorceress awoke one night to a glow in her bed chamber. The Sword of Protection was floating and glowing.

It led the Sorceress to a door that had never been opened.

The Sorceress summoned Prince Adam to Grayskull and asked him to go in. She guessed it might be a doorway to Adora, but wouldn’t reveal her thoughts to Adam.

Adam eventually encountered Adora. She now was a Force Captain working with the Horde! Yet He-man could tell she wasn’t evil. He soon convinced her to see what the Horde was really like.

However, Adora was still enthralled by Shadow Weaver’s spells – and life-long brainwashing. It took holding the Sword of Protection and some coaxing by the Sorceress (along with the big reveal that He-man was her brother) for her to break free.

The Sorceress carried on as an ally to both He-man and She-Ra. 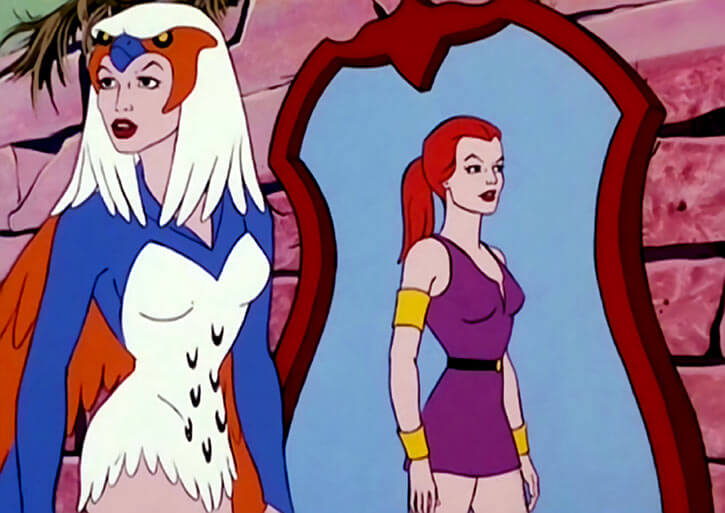 Sorceress’ present and past.

The Sorceress is a fit young-looking woman wearing an orange, blue, and white bird-motif costume.

Her headdress evokes a white falcon’s head with a blue beak.

She is soft-spoken and serious.

Because of her position as Sorceress, she must put her own wants and desires second to her duty.

The Sorceress states the power of Castle Grayskull can never be used against the friends of He-man. It must always be a safe haven for them (“Double Trouble” episode).

Though she has the greatest love for her daughter, she won’t reveal her identity as Teela’s mother. Not until the day Teela receives the power of Grayskull and assumes the role of the Sorceress.

In the meantime, the Sorceress keeps a close watch on her daughter. The Sorceress also watches over He-man’s development and maturity.

The Sorceress has had her fair share of tragedy. Yet as guardian she listens to the problems of her fellow Eternians and never asks for anything in return. 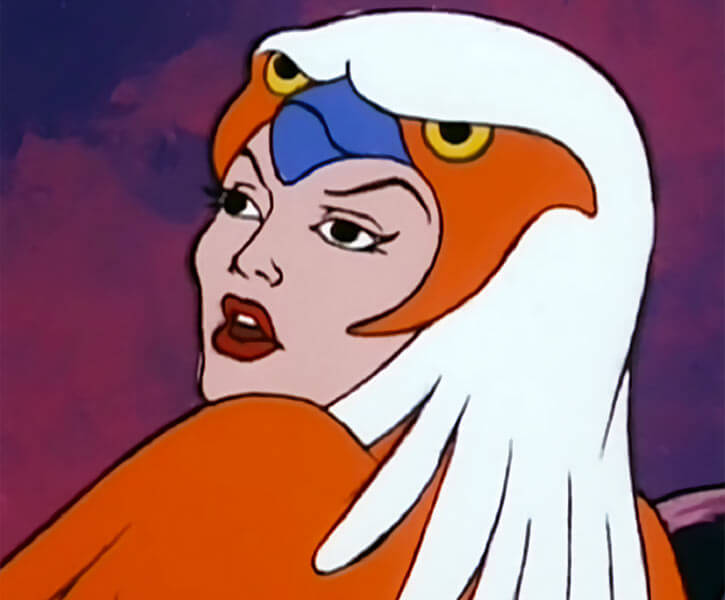 “I may not venture beyond these castle walls.”

“I’m getting a psychic signal from Grayskull. Skeletor is on his way there to attack it !”

“Reason is always better than anger.”

He-man: ” I want to thank you for all that you’ve done. Not just today but for all of those years you patiently waited protecting Grayskull.”
Sorceress: “It has been the highest honor, He-man and it has been and always will be a joy for me to call you my friend.”

“A short while ago, I sensed a great deal of energy coming from the Demon Zone.”

“This may take a little while, Adam. This language is very old, and I must find a particular book to help me with the translation.”

“Inside Grayskull I’m more than a match for Skeletor.”

“Castle Grayskull hear my command ! Expel these villains from your walls !”

“I live for the day when I can tell [Teela] that I am her mother.” 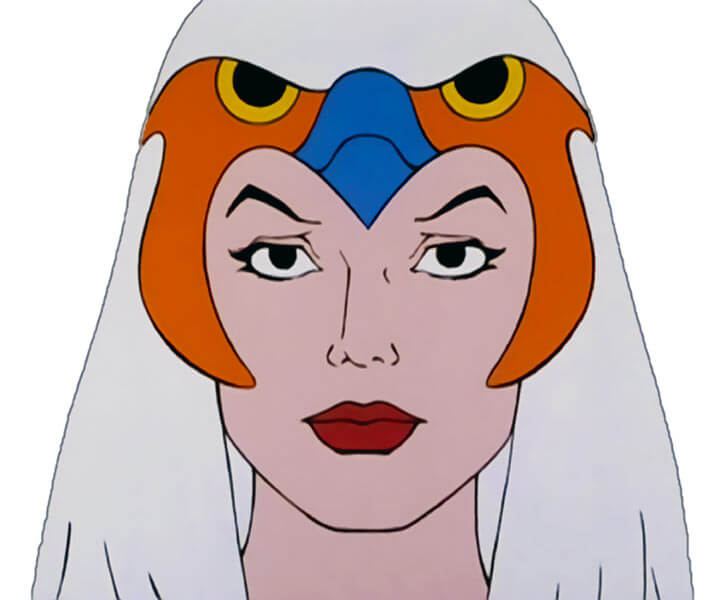 The Sorceress could make herself known to an individual destined to be the new champion of Grayskull. It would have to be an individual pure of heart. Like with the wizard Shazam and Captain Marvel.

The Sorceress has access to all the mysteries of Castle Grayskull. 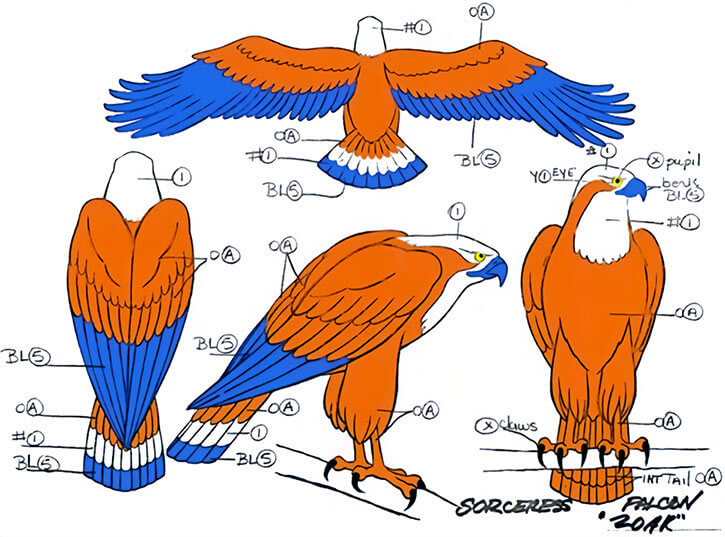 Secret Identity (Most don’t know Zoar is her alternate form).

The intent for the Sorceress leaving Grayskull was only in her falcon form. However, we see her do it several times for different reasons.

For instance, in the episode “Teela’s Quest”, Teela learns the Sorceress is her mother. The writer likely thought a face to face with mother and daughter would be more touching than a falcon.

The writers did give themselves an out when they introduced the Crystal of Allenar (“Origin of the Sorceress” episode). She may also remain in human form while on the grounds outside of Grayskull (“The Shaping Staff”).

There are a few inconsistencies that can’t be reconciled. In “Return of Evil”, Zoar opens a dimensional portal. But in “Diamond Ray of Disappearance” Zoar is lost in another dimension, sent there by Skeletor. She can’t get back because she has none of her powers in that form. 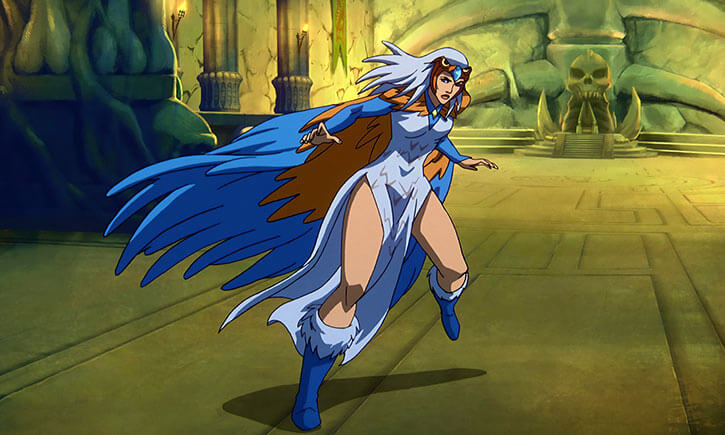 The modernised Sorceress outfit in Revelation, though it’s outside of the scope of this profile.

Many of the Sorceress’ powers are actually her using Castle Grayskull’s power.

For instance, when she opens space portals she is using the Dimension Travel Power of Grayskull. An example of this is at the end of the “Dragon Invasion” episode.

Distances for her powers were difficult to estimate. I assume each POI is 12 to 16 miles (14 APs) from one another.

Powers demonstrated by the Sorceress are shown at varied levels. Sorcery shouldn’t be used to duplicate her other powers.

Seen only in one episode, the Sorceress sent a bird to help He-man and Teela. He-man called it her “messenger”. It’s a giant blue bird with a dark pink crest and glowing white eyes. It doesn’t speak, the Sorceress speaks through telepathy for it. Treat it as having Medicine (First Aid) at 07 APs (“Keeper of the Ancient Ruins”).

Telekinesis was a 04 until the “The Secret of Grayskull” episode.

Season 2 came with changes to the Sorceress but presented in a flashback as an origin story.

Zoar the Falcon had eye blasts.

The Sorceress herself displayed much more magical might than she had before. She used either Dimension Travel location hopping or a direct Teleport to send the Horde advance force far away. She explained that “by the time they reach their home and report we’ll be ready for them”.

She then put a ring of fire around Morgoth and Dimension Traveled him to the “Prison Zone” (“Origin of the Sorceress”).