Professor Victor Bergman is a Nobel Prize winning scientific genius and easily the most intelligent individual on Alpha. In fact, he contributed more to the base’s construction than any other single person.

In addition, he is the creator of both the Anti-Gravity Force Field employed by Alpha’s Eagle spacecraft and the “Bergman Cell” which powers the Stun Gun Model 1 and 2.

He is the discoverer of the Pluto satellite, Charon and the heretofore unknown planet Ultra, a mysterious world lying just outside our Solar System. If a scientific solution can be found for Alpha’s latest menace, it is Bergman who can devise it.

Though still vibrant, Bergman is no longer a young man. On the other hand, he can handle a Stun Gun adequately and will not hesitate to assist his fellow Alphans in a battle.

In fact, for a man of his years with his medical history, Bergman seems almost fearless in the face of danger. This is primarily due to his mechanical heart. Though restricting him in many ways it does convey one advantage : it makes Bergman physically immune to panic.

It does a great job of reconciling some of the chronological inconsistencies between Season’s one and two and even seeks to shoehorn in a Charlton Comic adventure or two. However I have chosen not to include information that I could not verify as coming from an “official” source.

For those interested, my “official” sources are, in order of importance:

Little is known of Victor Bergman’s personal history prior to the events of September 13, 1999. What follows is information that can be verified by official sources.

Bergman was born June 27, 1940 in London, England. A scientific genius from an early age, Bergman, while still in his 20’s, won a Nobel Prize for his work in determining the presence of natural satellites through the close inspection of planetary movements.

This early triumph was balanced by a life-threatening illness that left him with a mechanical heart.

Professor Bergman and Commander Koenig are old friends although it is unclear when and how they first met. We do know for certain that Bergman, Koenig, and Dr. Helena Russell have worked together at least since 1996. This is when all 3 were involved in the Ultra Probe mission, an attempt to explore the mysterious planet Ultra discovered by Bergman in 1994.

From all indications, these three principal Alphans have known each other even longer.

In the early 1980’s, Bergman was approached by the ILFC to contribute to the construction of the proposed Moonbase Alpha. Thrilled with the opportunity to partake in such a scientific adventure, he took a sabbatical from his teaching position at the International Space Academy and joined the project. He never returned to the classroom.

Instead, taking the unofficial title “Visiting Scientist”, Bergman stayed on Alpha after its completion using the conditions that he could only find on Luna to conduct scientific experiments.

As a result, he was on Alpha on September 13, 1999, when a massive nuclear explosion sent the moon hurtling away from the Earth and into the vast reaches of space.

Some time between Alpha’s encounter with the planets Arkadia and Psychon (timelines vary widely – unofficially 328 days after leaving Earth orbit) Bergman was killed when his space suit malfunctioned while supervising the installation of the moonbase’s new laser defense ring.

(Official sources claim Professor Bergman died somewhere between the events depicted in The Testament of Arkadia (Season 1, Episode 24) and The Metamorph (Season 2, Episode 1). Fan speculation, however, presents a much happier fate for Alpha’s resident genius.)

(While I feel a duty to the “official” sources, my fondness for the character forces me to mention this other version of why Bergman is missing in the show’s second season.)

There are unsubstantiated reports that Bergman was not killed in this accident, however, and that his subsequent absence from the moonbase was a result of his own conscious decision to leave.

This theory holds that approximately 380 days after leaving Earth orbit, the professor left Alpha voluntarily to live among an alien race, the inhabitants of the small planet Krom II. There he sought to lead the aliens out of their dark age into one of reason and enlightenment

Professor Victor Bergman is a Caucasian man of average height. He is trim and outwardly healthy for his age. His Alphan duty uniform consists of Khaki shoes and slacks. The khaki tunics of Moonbase personnel have colored left sleeves and collars indicating the individual’s assignment on Alpha.

As Bergman has no official rank or assignment on the base, his tunic has no colored sleeve / collar.

Like all Alphans, he wears an I.D. badge over his left breast and a thick, khaki belt which his Commlock clips onto and which can support a Stun Gun holster.

Professor Victor Bergman is the quintessential scientist : perceptive, ingenious, and curious almost to the point of being foolhardy. He is fascinated by the many strange beings, worlds, and phenomena that Alpha meets in its journey across the universe and looks at every new encounter as an opportunity to learn.

As a result of his mechanical heart, he is slow to react to nervous stimuli allowing him to calmly analyze each new threat to the moonbase. When posed with a scientific puzzle, he often thinks out loud, positing theories then dismissing or altering them based on the facts.

To the residents of Moonbase Alpha, Bergman is a grandfatherly figure, quick with a word of encouragement or a comforting pat on the arm. He is especially close to Commander Koenig who perhaps sees the elder scientist as a surrogate father.

By virtue of his early work on the moonbase project, he is considered something of a fixture on Alpha while his status as “visiting scientist”, a position that affords no official rank, allows him to play the part of outsider-looking-in.

Finally but most importantly, Bergman is a philosopher and humanist, a trait he shares to a certain extent with Alpha’s Commander Koenig. While unlikely to point to the traditional concept of a divine presence as the cause of Alpha’s trek through space, he does acknowledge some “cosmic intelligence” is at work in the universe.

“I’m a scientist. I don’t know anything about God. No, it’s a cosmic intelligence that I’ve got in mind”

While Professor Victor Bergman recognizes that his great intelligence brings with it a certain responsibility to his fellow Alphans, his main motivation is a genuine love of scientific inquiry. This is represented in MEGS terms by the motivation Thrill of Discovery.

Essentially, such a character has the Thrill of Adventure motivation with the adventure in question being scientific endeavor.

A misguided scientist who inadvertently creates a dangerous virus or rampaging monster in his pursuit of pure science might have the Thrill of Discovery motivation.

One of the problems that Bergman and his Alphan companions confront on a daily basis is how to allocate the Moonbase’s very limited resources.

While mining and excavation of the moon produces some of the materials that the Alphans require, making a Wealth Check or finding components to build a Gadget on Alpha is never as easy as simply making a dice roll.

As a father figure / mentor to Moonbase Alpha’s Commander Koenig and the base’s finest scientific mind, Professor Bergman and his resource needs are usually given high priority when allocations must be made.

But the well is far from inexhaustible and the GM should feel free to assess CS penalties to Wealth Checks or even simply disallow them if appropriate. 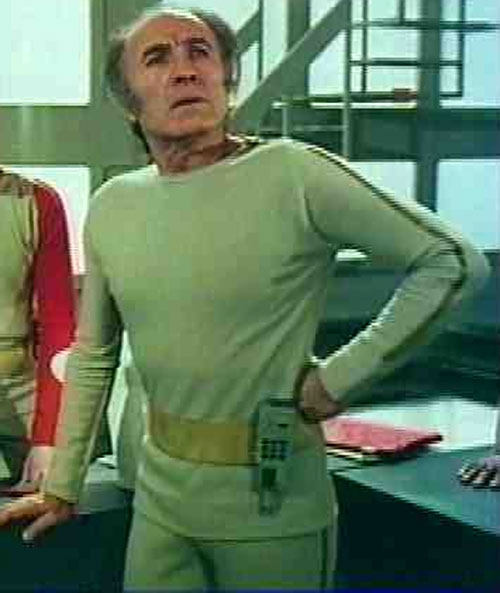