Space 1999 was a 1975-1977 science-fiction TV show. It was thus just pre-Star Wars – an important landmark in terms of genre credibility. It was British, though it headlined US actors for the American market.

Said actors were from the then-hot Mission Impossible series, and the showrunners were the Andersons, who made most sci-fi shows in the UK that weren’t Doctor Who (for instance, Thunderbirds). Despite that the series didn’t fare well – but there still exists significant nostalgia about it.

The Background is intentionally vague in places. I have yet to collect all the episode novelizations.

Commander John Robert Koenig is a physically fit 40 year old adult male. He is an expert Eagle pilot and astronaut, perhaps second only to Chief of Reconnaissance Alan Carter.

He is proficient in the use of the various weapons at his disposal on Alpha from the hand held to Stun Gun Model 1 and 2 up through the laser cannon batteries installed after Luna’s “breakaway” from Earth.

Koenig’s main strength, however, lies in his intelligent mind and phenomenal willpower. He is one of America’s leading astrophysicists, a veteran of many space missions, and one of the designers of Moonbase Alpha itself.

His willpower and sense of self is truly extraordinary. When some alien force seeks to subvert the Alphans’ wills or cloud their perceptions, it is, invariably, Commander Koenig who retains his freedom or sees through the deception.

Koenig, the man who must make the difficult, sometimes painful, decisions is also the glue that holds the Alphans together.

The super-dated theme, intro, snippets… summarising the show, in 1080p.

What follows is information that can be verified by official sources.

He was born March 17, 1957 in Brooklyn, New York, USA. As a schoolboy in the 1960s, Koenig’s interest in the space program was ignited when he watched the televised images of Neil Armstrong’s moon landing. Imagining his own “giant leap for mankind”, Koenig vowed that he would one day reach the stars.

He was orphaned at a young age, perhaps in his early teens, and was forced to fight both intellectually and physically to see his dream come true.

Even when John Koenig reached his dream, his life was filled with tragedy. While still an astronaut cadet, Koenig was forced to abandon his friends, Sam and Tessa, behind on an ill-fated Venus expedition when the pair had contracted a fatal disease.

In an attempt to bury the guilt he felt over the death of his friends, he launched himself into his work planning and executing many successful space missions both as astronaut and ground control.

In the early 80’s, Koenig was asked to contribute on the design of Moonbase Alpha. While he was busy working on the development of Alpha, tragedy once more came calling. A nuclear device of unknown origin destroyed Switzerland. Koenig’s wife Jean, vacationing there, was killed in the explosion.

Koenig, never an easy going man, became positively driven as the Earth’s nuclear powers ordered the dismantling of all weapons of mass destruction and their burial on the far side of the moon. He spent much of his time on Luna helping to complete Alpha and tailoring it to its newest function as custodian of Earth’s nuclear arsenal.

Sometime after the completion of Moonbase Alpha in February of 1997, Koenig returned to Earth. On September 9, 1999 he once more found himself on Alpha. The International Lunar Finance Commission had become worried about the fate of their newest project, the exploration of the mysterious wandering planet Meta.

Koenig was made commander of Alpha and given the task of discovering why 9 Meta Probe astronauts had died of a strange illness.

Koenig’s appointment fulfilled to purposes for the ILFC. On the one hand, Koenig was one of America’s leading astrophysicists and the perfect man for the job of getting the Meta Probe launched on time. On the other hand, a new commander would make a perfect scapegoat should the expedition fail to come about as planned.

Realizing that Disposal Area Two contains 140 times the amount of nuclear waste as Area One, Koenig put a plan into action to avert disaster by ordering the dispersal of the waste in Area Two over a wider area. September 13, 1999 the Eagle Transporters began the operation.

Initially, Koenig’s plan seemed to work. But then an enormous magnetic energy surge detonated Area Two, tearing the moon from its orbit. Nuclear Waste Disposal Area Two acting as a huge rocket engine, the moon was propelled further and further away from Earth.

With Alpha’s central computer dismissing the likelihood of returning to Earth in Alpha’s sizable Eagle fleet, Koenig was forced to make the crucial decision to stay on Alpha.

Over the following years, Koenig led the Alphans against bizarre and terrible threats in their quest for a new home. During the course of these adventures, he established a romantic relationship with Alpha’s Chief Medical Officer, Dr. Helena Russell, who had also lost a spouse.

When a mysterious energy effect appeared in space emitting the psychic power endowing “lambda variant”, Koenig was tormented by visions of Sam and Tessa.

This nightmarish episode allowed the Commander to finally rid himself of his guilt regarding his dead friends and left him more at peace with his past. The incredible experiences of Moonbase Alpha and its inhabitants have convinced John Koenig of man’s place in the cosmos.

As he explains to one alien threat, something or someone is watching over the wandering moon.

Commander John Robert Koenig is a tall Caucasian man in his 40’s with a lanky build. He has a long, dour face with an aquiline nose, high forehead, short hair that he parts on the left, and piercing eyes. His Alphan duty uniform consists of khaki shoes and slacks.

The khaki tunics of Moonbase personnel have colored left sleeves and collars indicating the individual’s assignment on Alpha. Koenig’s tunic sports a black sleeve and collar (only the Commander gets to wear the black!).

In addition, Koenig’s tunic has a black stripe down the right sleeve further distinguishing him from the rank and file Alphan. Like all Alphans, he wears an I.D. badge over his left breast and a thick, khaki belt which his Commlock clips onto and which can support a Stun Gun holster.

In a word : intense. To say that Commander John Koenig is a serious man is an understatement of rare proportions ; his countenance is almost invariably grim. Even on the rare occasions when he makes a joke it is usually a dark one.

Koenig is well aware of the importance of every decision he makes and he strives in all things to be fair-minded.

He regularly asks for input from Main Mission Controller Paul Morrow, Technical Section Head David Kano, and, especially, his friend and mentor Professor Victor Bergman. Ultimately though, the tough choices regarding the allocation of Alpha’s slim resources or its response to the latest alien threat are his and his alone.

It is a responsibility that weighs heavily on him; a responsibility he would gladly relinquish. But Commander Koenig is a good man who knows that Alpha needs a strong leader. So, he perseveres, giving the Alphans a stoic father-figure to look up to.

Under this businesslike exterior beats the heart of a philosopher. He has become convinced that the Alphans’ interstellar travels have some meaning. Perhaps this small pocket of humanity is being tested. Evolve or die. Ascension or oblivion.

Whichever the path Alpha finds itself on, Commander Koenig will be there making the tough choices.

“Ever since we blasted away from Earth, we have been fighting for survival. We have survived. How, I don’t know. There’s no rational explanation. What I do have is an absolute faith in the strength of the human spirit, and a belief that something or someone is looking after us.”

Drawbacks:
Forced Exile, Guilt (Until the events of “The Lambda Factor”, 2308 days after leaving Earth orbit).

One of the problems that Koenig and his staff confront on a daily basis is how to allocate the Moonbase’s very limited resources. While mining and excavation of the moon produces some of the materials that the Alphans require, making a Wealth Check or finding components to build a Gadget on Alpha is never as easy as simply making a dice roll. As Commander, Koenig has the final say in the distribution and use of Alpha’s resources but the well is far from inexhaustible and the GM should feel free to assess CS penalties to Wealth Checks or even simply disallow them if appropriate. 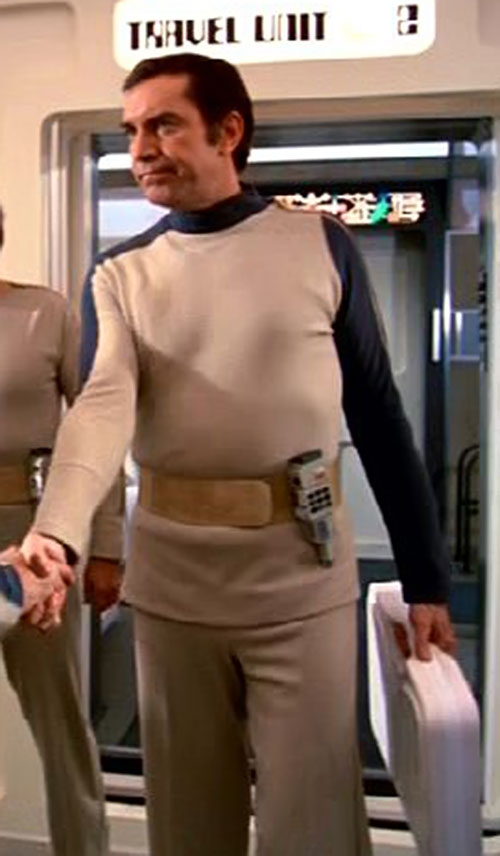