Spark has the ability to generate electrical fields. She can use these to project lightning or disperse electrical shocks.

Ayla Ranzz was used to being overlooked, being the only girl in her family. It always seemed that the only one who ever took notice of her was her twin brother Garth, and then only when he was jealous of her.

But the sibling rivalry didn’t really get to Ayla. She managed to maintain an upbeat outlook on life, befitting one who grows up in the temperate climes of Winath. She even remained cool-headed when she, Garth and their older brother Mekt crashed on the planetoid Korbal. Ayla came up with the idea of recharging their spaceship by luring the native lightning beasts to them.

Surprisingly, though, the beasts found them first and blasted them. They were knocked into a coma and were eventually rescued. Each one woke up some months later with lightning powers similar to the beasts that blasted them.

Ayla and Garth woke up to find Mekt gone. While Garth felt that the lightning had driven Mekt away and that he needed to find Mekt and help him, Ayla remained devoted to her parents. She vowed never to cause them the pain of losing her.

At first, Ayla had kept her abilities a secret from her parents. Garth’s departure also caused many Winathians to reject her as a “solo”. But these troubles ended when she was forced to use her powers to save her planet’s presidents’ from terrorists, earning her great celebrity and acclaim.

When the Legion of Super-Heroes was formed, Winath sent Ayla as their representative. The planetary government considered Garth, already a Legionnaire under the name Live Wire, a runaway minor. Although accepting Ayla meant, by presidential order, having to oust Garth, Ayla was accepted by her new teammates without any apparent controversy.

In fact, Chameleon had fallen in love with her, secretly giving her gifts…although she believes that Invisible Kid was behind them.

Despite some initial jealousy from Garth, he eventually accepted the reality of her as a Legionnaire. Especially after she inspired him to continue his search for Mekt. She helped Garth defeat Mekt, who had become the criminal Lightning Lord, and to disabuse him of his idol-worship of his big brother.

She has since returned to the Legion. She was first pleased to find out that her secret admirer was Invisible Kid… and then horrified to find out that it was actually Chameleon. But she appears to be coming around to accept this (perhaps due to the influence of the Emerald Eye of Ekron).

Spark was hurled backward through time to the XXth century in the aftermath of the Legion’s confrontation with the Eye.

It was while she was trapped there that she, along with several other super-heroes, entered the Source. This caused her to lose her electrical powers and gain instead the power to cancel the effect of gravity on objects.

Following her return to the XXXth century, she began to experience moments of weakness. These were diagnosed as a psychosomatic response to the loss of her “twin-ness” with Live Wire.

Attempting to rectify this problem, she got herself killed by trying to get a lightning beast to restore them, which her Source-altered genetic structure could not accommodate. But Garth managed to restore her to life, and the power she had had previously.

Ayla has bright red hair and wears a blue and white costume with lightning bolts coming over her shoulders and across her chest.

Ayla is a bit of a hot-head, like her brother, acting before thinking sometimes.

After she emerged from the Source, Ayla possessed the Gravity Decrease power at 12 APs instead of her Energy Absorption and Lightning powers.

The power was Fatiguing, but worked differently. The OV of the Fatigue check was her Int (representing that, while the power itself did not cause her harm, her mind could not reconcile the fact that she was so different from her twin).

She also possessed CIH (Having a major difference from her twin brother).

When she was brought back to life on Korbal, her powers returned to normal and her CIH was removed. 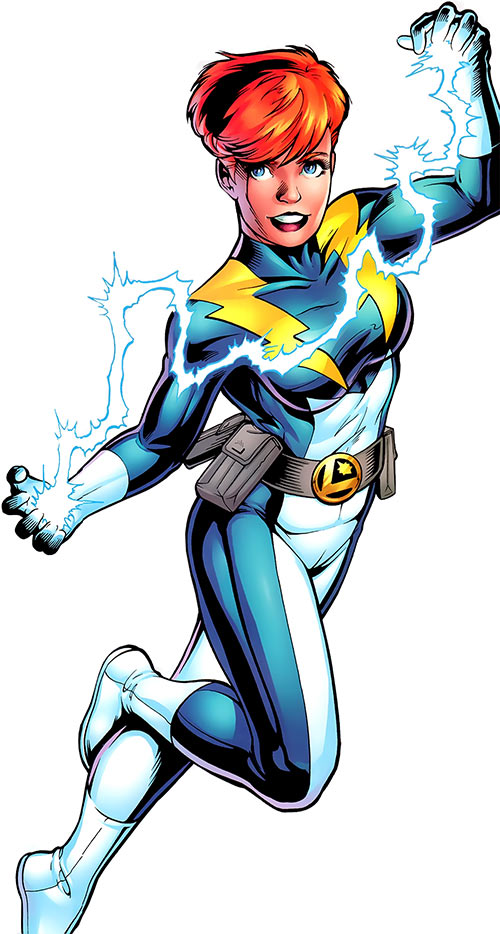