Spear is an obscure Marvel character.

Spear is a powerful athlete and fighter.

He has a talent for disappearing in the shadows. This is done using stealth, acrobatics and a swing line.

Spear’s costume is thoroughly armoured, even though it looks like super-Spandex.

Aside from his line and grappling hook, Spear carries tear gas grenades.

His main weapon is his speargun – a launcher of large bladed projectiles. His spears include :

Our *guess* is that this equipment was commissioned from the Tinkerer. 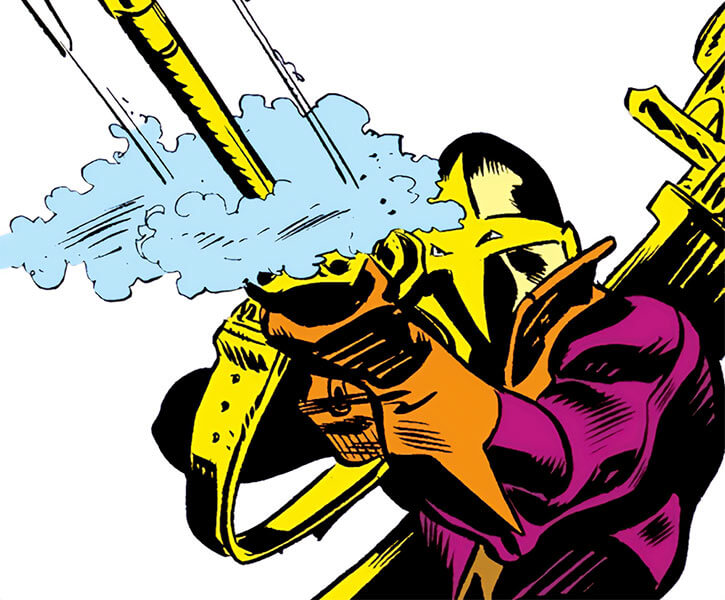 While Jack Daniels was in prison, he was diagnosed with an incurable brain tumour. He thus volunteered for the early cellular regeneration experiments of Dr. Noah Burstein.

Conducted on inmates, these experiments would later produce such men as Luke Cage or Warhawk.

But this experiment only accelerated Jack’s painful death. The corpse, still twisted in agony, was returned to his mother and his two brothers.

My brothers will avenge me

Both of Jack’s brothers swore revenge. They would make Burstein suffer and die as Jack did.

Jasper became the costumed avenger Spear. He took the lead so his older brother Shadrick, the dim-witted professional wrestler the Mangler, wouldn’t mess things up.

(Marvunapp.com  notes that the published story wasn’t the one that was originally intended. Indeed, it seems likely that Burstein’s dark secret, the reason why Spear and the Mangler were hunting him down, was something more terrible and far-reaching than Jack Daniels’ death.) 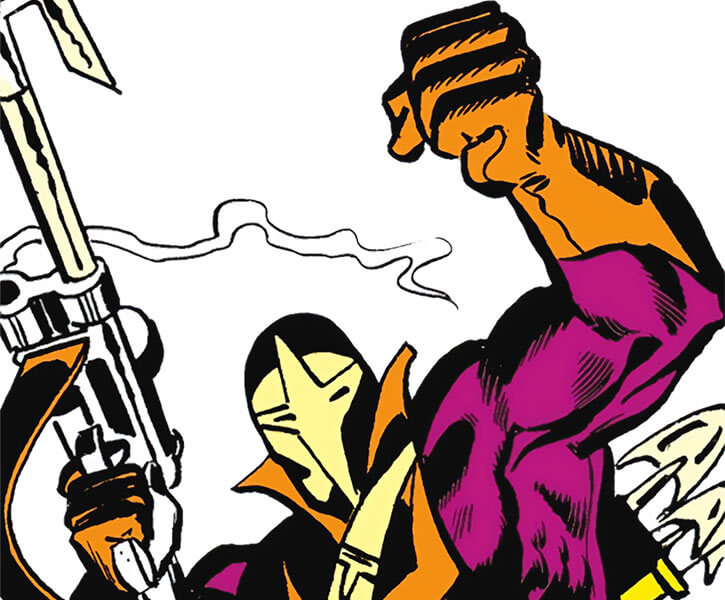 Over a few years Spear :

He stalked the doctor, terrorising him for days. Burstein’s friend, Luke Cage, tried to stop Spear on several occasions, but couldn’t nail him.

The Mangler tried to help, but Cage caught him. Thus, Jasper had to leave Burstein alone for a while to free Shadrick. After a daring seventh-floor assault through a window freed Mangler, Spear returned to Burstein and finally shot him.

However, an ambulance came in in time, saving the doctor’s life.

Not knowing that Burstein was still alive, Spear packed up to leave New York City.

Meanwhile Mrs. Daniels, fearing that the police would kill her sons, came to Cage and his ally Detective Chase. She gave them Spear’s current address if they promised not to kill him.

Cage and Chase caught up with Spear in the nick of time. Daniels narrowly escaped, leaping onto the roof of a bus to make his getaway. Cage nevertheless caught up with him.

The two men fought atop of the bus. They crashed through the windshield, sending the bus careening into the Hudson river. Cage knocked Spear out and handed him over to the police.

Decades later, Spear appeared as a member of the Rivals. It was a loose coalition of mercenary New York City villains coordinated by Nightshade (Tilda Johnson).

The Rivals were summoned to take on Iron Fist, Luke Cage and the new Power Man (Victor Alvarez). But they were overwhelmed.

Soon after that, the “Spider-Island” crisis mutated Manhattanites en masseIn a group; all together..

Nightshade and the Rivals tried to force the quarantine blockade to flee while they still could. But they were beaten back by Misty Knight and her operatives.

In 2016, Shadrick was beaten and captured by the Preemptive Strike vigilante militia.

Cletus Evans (formerly the Disco Devil) and “Cockroach” Hamilton also joined. They feared they were next.

They pooled their money to hire Luke Cage and Daniel Rand. But things went bad. Spear joined Mangler in prison, as did Iron Fist.

Though Spear refused to trust a millionaire White dude, the Heroes for Hire eventually took down the Preemptive Strike conspiracy. It involved fabricating perfect criminal records to frame even complete innocents.

Jasper returned to the life. But Shadrick instead joined Cage and Rand’s venture as a construction foreman. 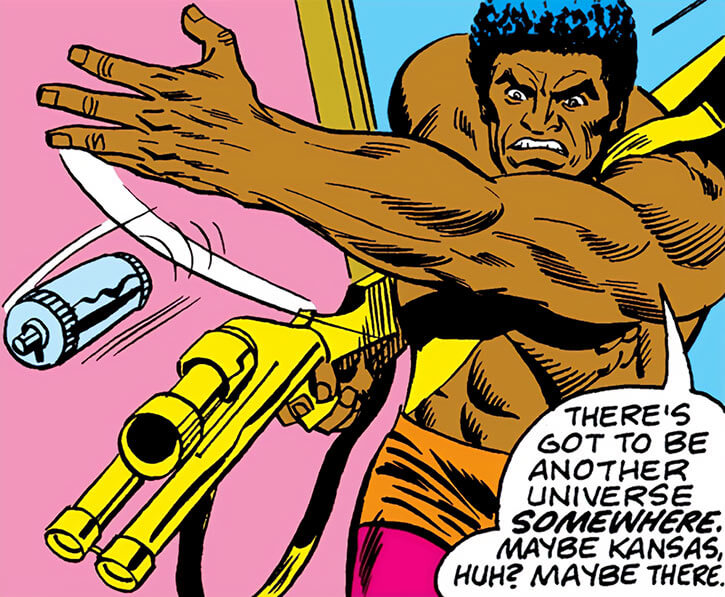 In 1975, Daniels was consumed by his need for vengeance. He wanted it to last, to be thorough, and to be strikingly dramatic.

He sounded smart and well-educated. He also was daring and confident.

Spear liked making thunderous, theatrical statements and threats. He presumably rehearsed. Either that, or he’s a graduate of the Thor School of Improv Monologuing.

This was in large part because he felt that his cause was that of righteous justice. But his 2010 appearances also featured elaborate threats full of showmanship.

In 2017, he was markedly less verbose, and pettier. He seemed bitter, angry and tired. Seeing his 100% reformed brother shoved back into prison based on fabrications may have been the cause for this.

“Cage, I told you way back in the beginning to stay out of this. Accounts have been settled. Don’t make me have to take you out the way I did with Burstein.”

“You see what they did to him ? Commit a crime and they treat you like you’re a Guinea pig.”

“It leaves you with no time at all, Cage ! You aren’t anywhere as quick as Spear.”

(Text of a death threat sent wrapped around a spear) “There isn’t a Nuremberg  to judge your crimes ; your crimes have been sanctioned by the State, though there is no war to hide your atrocities. But there is a judge, and I am that judge. My spears slice through the deceit of your past. You have been sentenced ! And the sentence is death !”

“Don’t worry Burstein… you won’t have to sweat much longer ! Soon, you’ll burn in the fires of the Hell you created ! And even Cage — even he can’t stop your death !”

“You want to tell me how it feels, Burstein… the way Jack told me while he waited for death ? You aren’t safe anywhere. Not at the clinic. Or a grocery store. You’re fair game.” 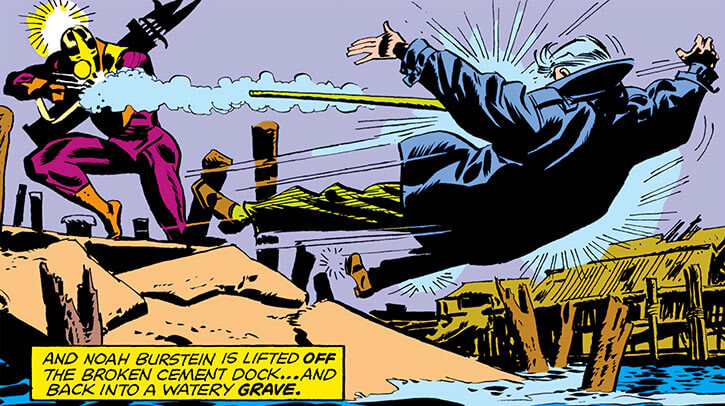