Everquest , released in 1999, was one of the first modern Massively Multiplayer Online Role-Playing Games (MMORPG) . Though an early effort aimed at a hardcore public, it was remarkably successful and invented many MMORPG genre conventions.

It paved the way for another landmark game, World of Warcraft, which drew liberally from Everquest but made it more accessible, players-friendly and polished.

Spectres are very strong and durable undead creatures, and not wholly material. They do not usually display fancy abilities, nor do they need to.

They just swoop in in a terrifying manner, gleefully reaping opponents with their enormous scythe. This large weapon has a long blade made of a bronze-looking metal. It can easily slash through two or even three opponents standing close to each other – especially if they are paralysed with fear.

Spectres particularly enjoy reaping multiple opponents in this way, cackling to themselves as they do. 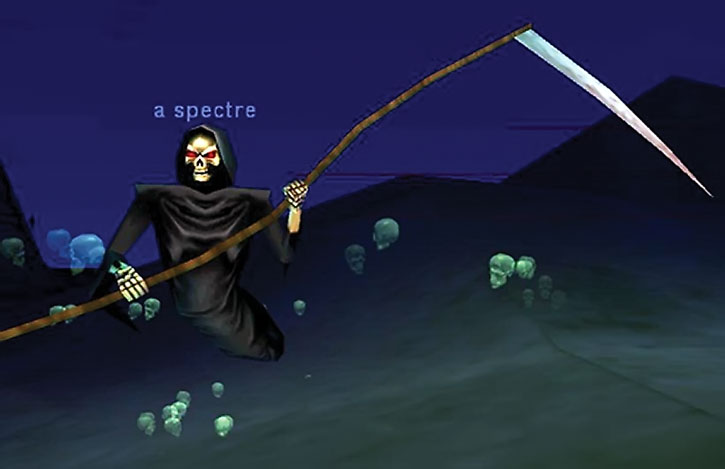 To most, the spectres of Thule are an unstoppable engine of death and terror. It takes a powerful creature, special magical tactics (such as an experienced necromancer) or a superior fighting force to destroy one.

How Spectres are created is unknown. They might be planar creatures, animated corpses, enthralled souls, ectoplasm, etc.. That they are affected by magic targeting the undead is an important clue, but still leaves too many possibilities as to their nature.

Spectres are magically-created undead creatures serving the God of Fear, Cazic Thule . They also have been seen as servants for some of his relatives such as Terris Thule the Dreams Scorcher, Lady of Nightmares – and some allied gods such as Rallos Zek, Saryrn or Bertoxxulous.

Potent necromancers have also assembled spectre-like creatures (such as the “cold shades” created by Velketor), but these are not as powerful as the real thing. 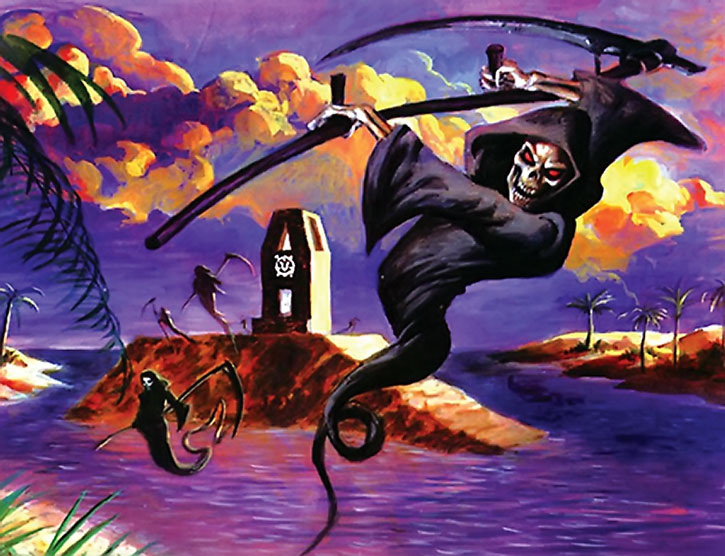 Small teams of spectres are occasionally sent to another plane to perform simple missions. Usually, it is to stand eternal watch over some point of interest to their master. Such a troop of spectres stands guard deep in the swamp of the Feerrott, in the hidden caverns where the portal to the Plane of Fear is situated.

Death in the desert

Most famously, spectres stand guard in the Oasis of Marr, deep in the Desert of Ro. The island in the middle of the oasis holds some sort of ancient tower or temple, about which wild rumours keep circulating. Most such speculations have to do with the structure holding a portal toward another plane.

The Oasis sees a fair bit of traffic. This includes mercenaries who have come to fight the local orc forces (to earn bounties from Freeport) or the giant crocodiles (to sell the skins). From time to time one such fool will try to have a look at the strange tower.

This will inevitably trigger the wrath of the terrible spectres, implacably chasing the fleeing would-be explorer and slaying anything in their path. Since a person running for their life will initially be faster than a spectre — until fatigue sets in — such chases can last a while and result in widespread panic and a significant body count.

Some of the most powerful necromancers know rituals to supplicate Cazic Thule (or other spectre-creating dark gods) and summon a spectre minion. Part of the ritual is that the emissary be allowed to spread fear and misery – which is usually not a problem for necromancers.

Seeing a person guarded by an Emissary of Thule (or very similar creatures such as one of Saryrn’s Companions, or a Child of Bertoxxulous) is bad news indeed. 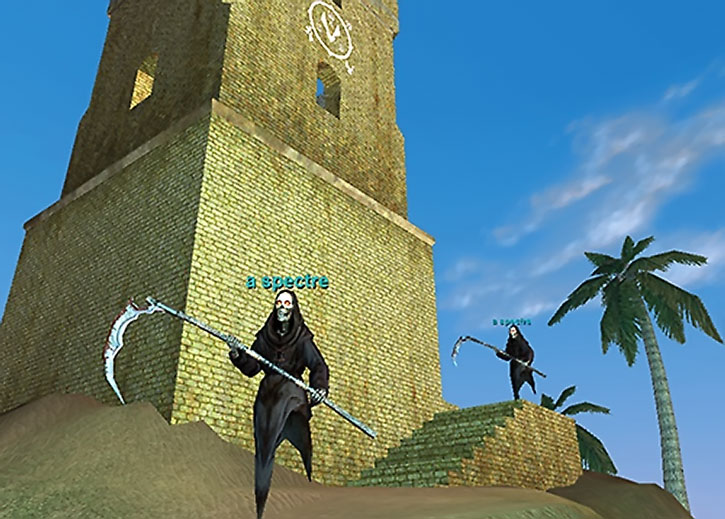 Spectres are intelligent and cruel, but generally devoid of emotion and not bothering to communicate.

Spectres are quite straightforward in appearance and abilities. They are meant to be recognisable for what they are and inspire fear.

Generic Spectre (aka Emissary of Thule)

The Weltanschauung informing the power levels is that of a very early Everquest level – back when soloing was extremely hard, PC power levels low, the game pretty punishing, reaching level 50 was remarkable, etc. 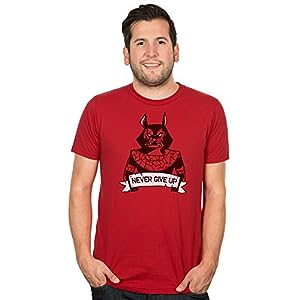 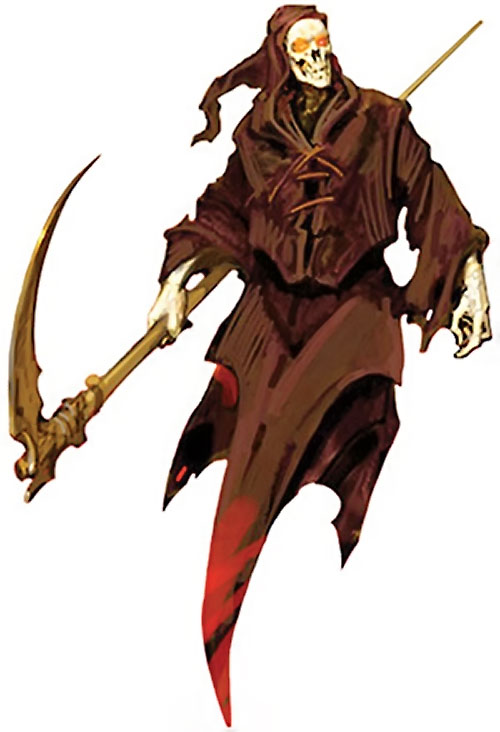 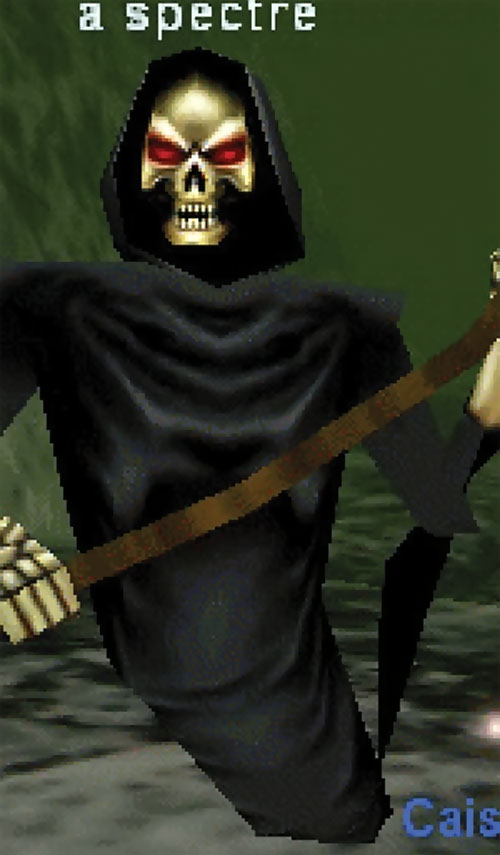 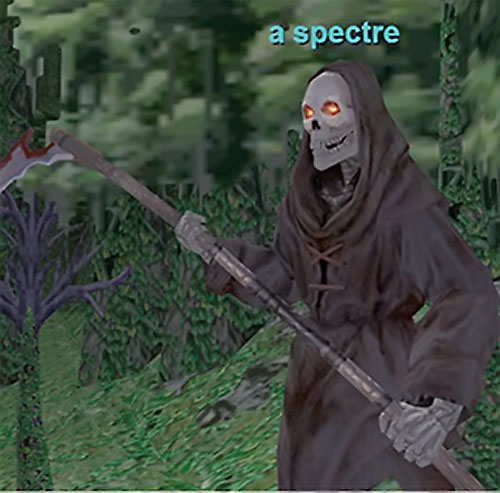 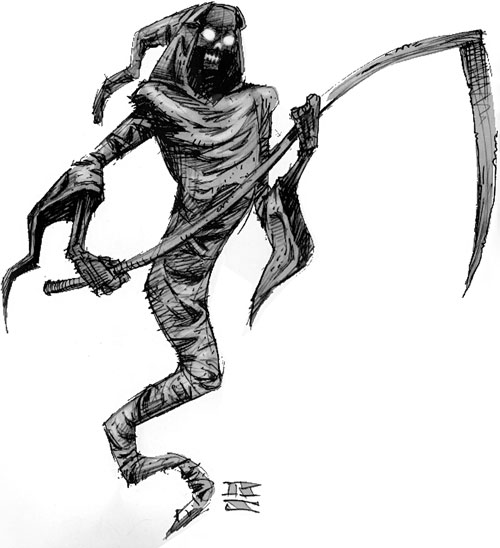