Thomas can move at superhuman speeds, crossing continents in minutes.

Moving at speed, he’s able to phase  through solid obstacles, even taking passengers. However this can take some concentration to make sure the transfer of kinetic energy doesn’t make things explode. Making things explode intentionally in this way is fairly simple.

When the Scarlet Witch became desperate to have children, she used her reality-altering powers to create twin boys, unwittingly using two lost souls which were actually fragmented energies of the Hell-Lord, Mephisto.

Scarlet Witch and the Vision named their children Thomas and William, and they lived relatively normal lives until Mephisto claimed the two souls as his own, seemingly reabsorbing them. The twins’ souls, however, had been so transfigured by the events that they temporarily destroyed Mephisto, and were believed destroyed.

When the Scarlet Witch used her powers to recreate the world after the House of M event, she inadvertently recreated both Thomas and William as well. However, instead of recreating them as her children, her powers saw them reborn before they’d even been born. They ended up as the children of other parents.

Following the divorce of his parents, Tommy was always getting in trouble, the seriousness of which escalated when his powers developed. He found himself in a juvenile detention facility, with his powers technologically neutralised. It was there he met, and developed a relationship with, Coat of arms.

When the Young Avengers were looking for new members to help rescue Hulkling from the Super-Skrull, they gained Tommy’s name and location from the Visions files and broke him out. They discovered he bore a strong resemblance to Wiccan.

He agreed to join them, probably in most part due to his attraction to Hawkeye (Kate Bishop), and adopted the codename Speed. He’s flirted with Kate a bit, but seems to realise they’ll never be more than friends.

Due to guesses about their parentage, Billy and Tommy tried finding the Scarlet Witch, without success. An encounter with a barely lucid Master Pandemonium didn’t clarify the situation much.

He was reunited with Coat of Arms, and supported her recruitment to the team, despite her quirks. She elected to stay with the Young Masters, though, her artistic calling seeing something in them she could use.

Arrogant and rebellious, Speed seems to resist all forms of authority as a matter of pride. He has little regard for laws, committing property damage with reckless abandon, and is fairly impulsive and easily distracted. His sociopathic tendencies have eased during his time with the team, and he’s loyal to the others, but he still feels like an outsider.

He’s probably the most immature of the group, and actually gets on well with the younger members of the Runaways, such as Molly Hayes.

“Look, here’s the deal. We’ve got a super-soldier, a giant girl, a robot from the 30th century, a Skrull/Kree super-soldier, Billy (who, yeah, is kind of lame, but can cast spells), an Olympic class archer and martial artist, and… me. And really, me’s all you need. So tell me, whattayou got to think you shouldn’t just give up ?”

“They’ve kept me locked up for months… testing me… probing me… trying to turn me into a living weapon. Well, congratulations, officer… it worked.” 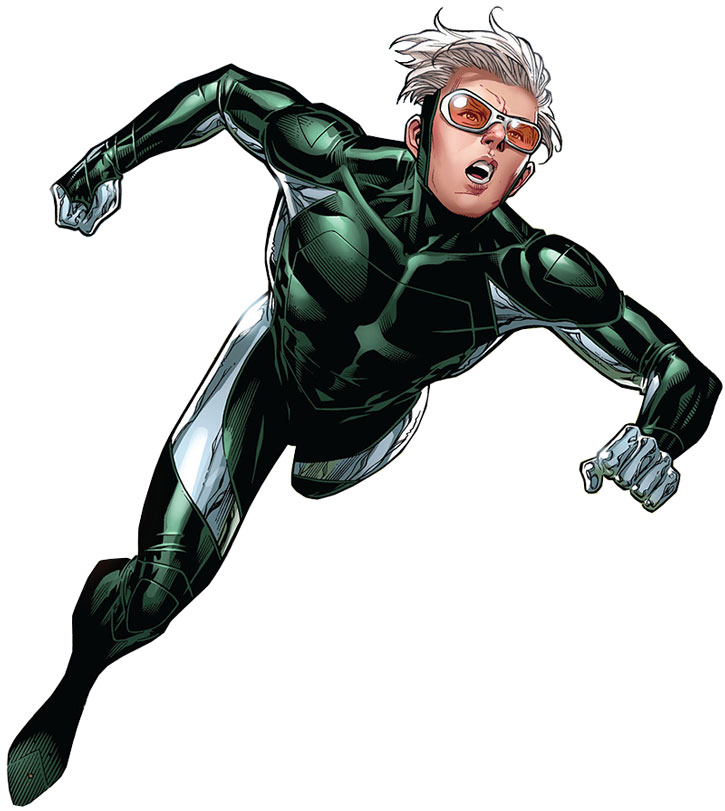 Speed: “Can I make a suggestion ?”
Hawkeye: “You’re not vaporizing them, Tommy.”
Speed: “Damn.”

Wiccan: “Tommy, wait —”
Speed: “Sorry, not in my vocab—” [Gets transported to a hell dimension]

Wiccan: “Maybe if we joined hands and… I don’t know — reached out with our… feelings?”
Speed: “I don’t have feelings. And I don’t hold hands.”
Magneto: “Careful, lad, or you’ll end up like me.”
Speed: “I should be so lucky.”
Magneto: “And I have a new favourite grandson.”

“It’s not that I don’t believe it, it’s that I don’t see the point. Because, even if she is our mother or whatever, it doesn’t change anything. She betrayed her friends. She murdered people. She almost wiped out an entire race. And she’s going to have to pay for all that. Which means now that we’ve found her, she’s just going to disappear again. So what’s the point ?”

When the Justice League of America were trapped in imaginary lives in a false world by Felix Faust, Zatanna and the Flash (Barry Allen) lived a life as a married couple, and had a pair of twins, Billy and Tommy.

When the JL broke free of this world, the twins were presumed to have disappeared with the false world, but they somehow survived this, possibly as pawns of Faust for a later time, and went to foster families.

I’m uncertain whether or not he’s a mutant, so I’ve left out the Drawback for the moment. 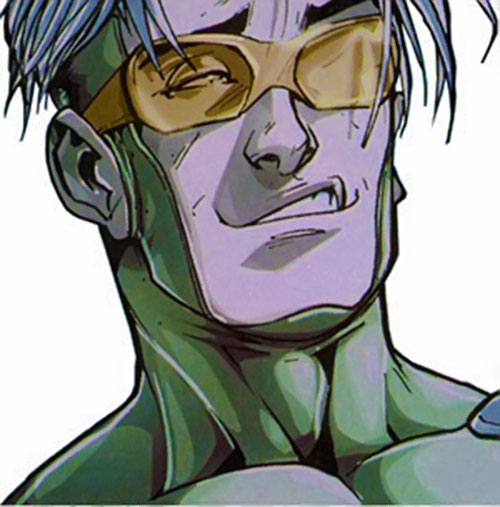 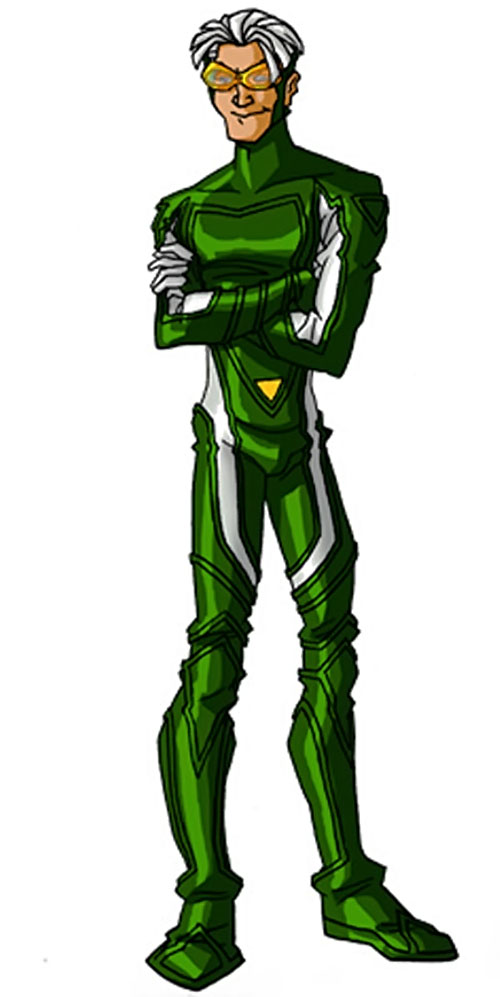 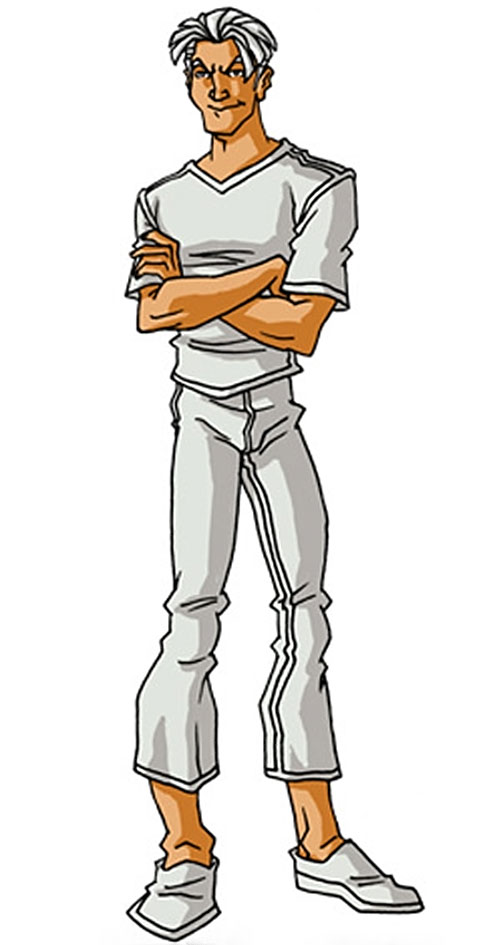 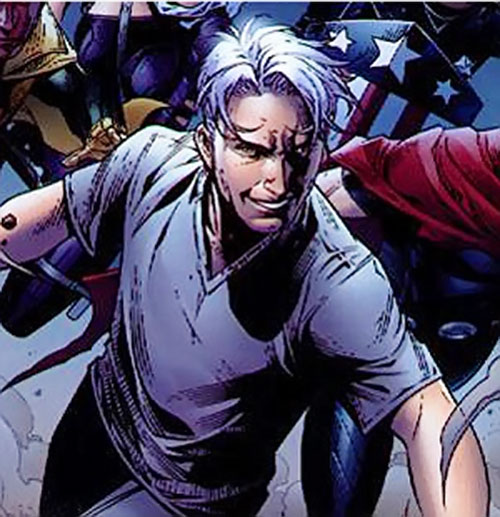