The Speedboyz members are adept at quickly stealing even expensive cars. Within 60 seconds of running in they can drive out with a haul of Jaguars, Rolls-Royces, Lamborghinis, Ferraris… without a single alarm going off.

All are adept drivers, and experienced with firefights. Unlike most thieves, they will open fire without hesitation, even against the police. They demonstrated good discipline and focus.

Since their operation doubled as a chop shop, it seems likely that they are adept at auto mechanics.

Some have individual talents :

During the early 1990s, the Speedboyz apparently became the premier gang of car-boosting thieves in the greater Gotham area. They did business with numerous domestic and international clients, ranging from stolen luxury cars to stolen car parts.

The Speedboyz were based in South Darby, at the head of the Gotham River Sound. Specifically they squatted the closed Luxor Oil Terminal. This site was discreet enough to bring hot cars to, and near a pier to ship the goods off.

Generally, they operated out in the suburbs. This likely helped with staying out of the way of both Batman and various crazy Gotham crime lords who frown upon indie operations.

In 1993, the Speedboyz attracted the attention of both Robin (Tim Drake) and Sheriff “Shotgun” Smith. Luckily for them, Robin found them before the county sheriff could. The Speedboyz were easily captured, and the police arrested them all.

In 1996, the Speedboyz attempted to steal a WayneTech prototype at a car show. ”Silver” and Blue were the same guys as before, and *perhaps* Gold. There was no Red, and Green was a new bloke.

Though Robin didn’t want to chase them too aggressively on the busy highway, he and Wildcat (Ted Grant) arrested the Speedboyz without much effort.

Blue was briefly seen in Blackgate prison in 1997. He attempted to take Batman down during an escape plan hatched by the Cluemaster.

The Speedboyz all wear a metallic face plate as a mask. It serves as a uniform of sorts, and offers some protection. This seems patterned on Blue’s face plate, since he has to permanently wear his. So they have to wear similar plates to achieve a uniform look, see ?

All Speedboyz also wear coveralls. They are codenamed after the colour of their coveralls – Green, Red, Gold (orange, really), Silver (white coveralls – that his code name is “Silver” is my assumption) and Blue (sometimes depicted with lavender or purple coveralls).

In the comics the coveralls are frequently miscoloured. This profile uses what seems to be the intended setup.

Silver is bossy and business-minded. He wants everything done quickly and efficiently. His real name is Kurt Stack.

Blue cannot speak – but he can grunt. He seems to be dangerously violent, and even Silver doesn’t push him too far. He’s called Cassidy – the other Speedboyz always call him by that name, whereas everybody else is always called by their colour.

Red is competitive and has a good level of initiative. He seems to drink a lot of caffeine, and may have an upper class background.

The original Green has a stutter, and is a bit slower and softer than the others.

Gold is curt and greedy.

Bonuses and Limitations:
Thief is limited to cars. 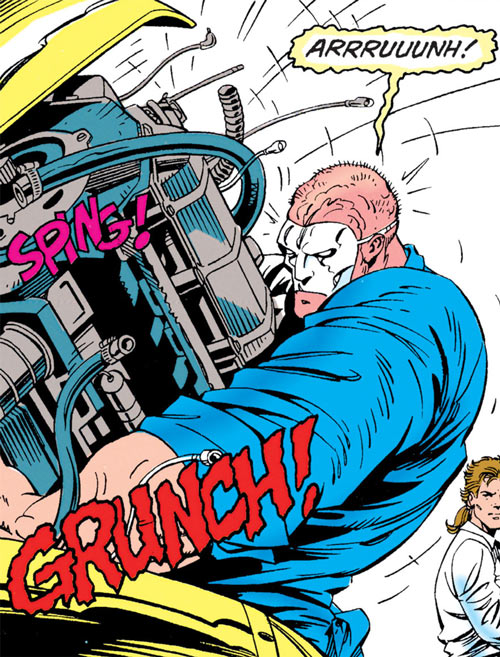