These old notes are about the first 10 issues of Spider-Man 2099. This comic was part of a line depicting a possible, cyberpunk-ish  future of the Marvel Universe. This books were mostly published between 1992 and 1996.

The experiment O’Hara was caught in was designed to give him powers inspired by those of the original Spider-Man. However, the archives on the late XXth century being what they are, it was more based on a theme than the actual set of powers.

Asides from the vaunted proportional strength and agility of a spider, Spider-Man 2099 has spider-like senses, claws and spinnerets. Thankfully the later are located on his forearms instead of his butt.

As for his costume, it is made of tough unstable molecules (which may prevent some lethal weapons from penetrating). It includes special webbed airfoils under his arms.

Prodigal geneticist Miguel O’Hara, the son of a famed Alchemax scientist, was considered highly promising by the Alchemax corporation from the start. Thus he gained access to a full Alchemax-sponsored education, and became a lead researcher. Howbeit, his genius barely compensated for his smug, aggressive and superior behavior.

The final project on which he worked was merging genetic templates together. It adult specimens as the receiving end for genetic imprinting. The project had been making spectacular progress. It was almost ready to move to one of its objectives of making a “corporate raider” (special agent) with the supposed powers of Spider-Man by merging him with the template of a spider.

Corporate pressure had the tests start before O’Hara wanted them to, and resulted in the death of a convict.

Blood on his hands

Shaken by this death, O’Hara attempted to retire from Alchemax. However one of senior executives of Alchemax, Tyler Stone, tdosed him with Rapture. This 100% addictive, hallucinogenic drug/virus is manufactured by Alchemax, thus making O’Hara a prisoner of Alchemax.

Desperately trying to get himself rid of this addiction, O’Hara sneaked into his lab at night. He attempted to copy his original genetic makeup (stored in the project’s computer) over his Rapture-altered physiology to cure himself.

However, Aaron Delgado, a middle-aged executive who had long been the butt of O’Hara irrepressible sarcasm, happened on the scene. Delgado put all equipment into overdrive, wanting to kill O’Hara. The young researcher survived unharmed but was turned into a spider-Man, and Delgado was accidentally killed.

Whatever a spider can

After that night, O’Hara had to wear unstable molecule fabric in order not to rip his own clothes with his claws. He wore a Day of the Dead Mexican festival death-head costume, the only piece of UMF in his home. 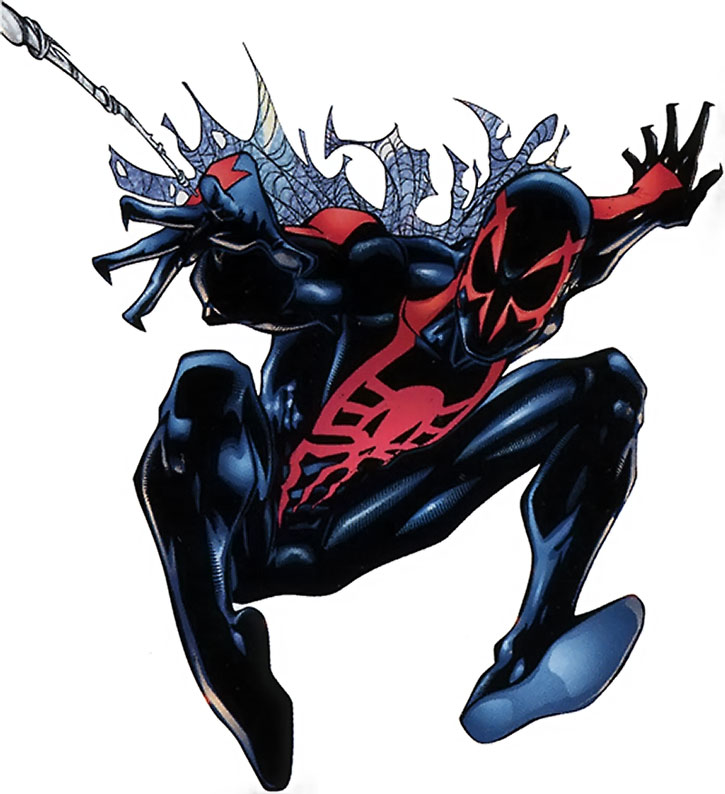 Hunted by Alchemax, Spider-Man 2099 was viewed by the Thorites. This is a popular cult worshipping the XXth century superhero and god Thor, and claiming he would come back to “smite the frost giants of industry”. Thorites saw him as a herald of Thor since he had the same powers as one of the mythical allies of Thor, Spider-Man.

Thus was Spider-Man 2099 born, fleeing Alchemax and fighting against corporate oppression from the bowels of New York City. Miguel O’Hara continued working for Alchemax (the company being unaware of his dual identity), hoping to ameliorate its corporate malfeasance from the inside.

As O’Hara, he dresses in drab clothes and wears shades to protect his light-sensitive eyes.

O’Hara is flippant, smug and unbearably sarcastic. The quotes in this profile are only a small part of the lip he can give to anyone, no matter how powerful. He’ll also interrupt people in mid-sentence, of course. After he underwent his transformation, he had fewer opportunities to be a smart ass, but he sure milked them.

O’Hara was raised in the corporate world, only caring about science and his own comforts. This made him ill-prepared for the real world. Its atrocities genuinely shock him. Despite his verbal aggressiveness he is an humanist, trying to protect innocents and see justice.

At this stage he tends to slightly panic when faced with violence. This had led to unwanted outbursts of deadly violence on his part.

Miguel thinks his brother Gabriel, a naïve grassroots protester against the corporations, is a fool. Yet Miguel came to share the fight of the more hardliners members of Gabriel’s political movement. A large part of Miguel’s motivation is the guilt of having been an ignorant corporate lackey. He wants to atone by changing the world for the better.

Aaron : “You may be the project head, but I’m the one who answers to Mr. Stone. Which means you answer to me.”
O’Hara : “I’ll try to stick to one-syllable words, then.”

“All right, I think I should warn you. I know kung fu, karate and several other dangerous words.”

The 2099 universe is quite specific, especially since parts of it are built on the misunderstood heritage of the heroic Marvel age.

Bonuses and Limitations:
Acrobatics and Evasion both are Powered Skills. 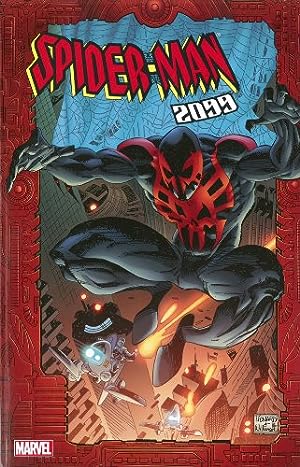 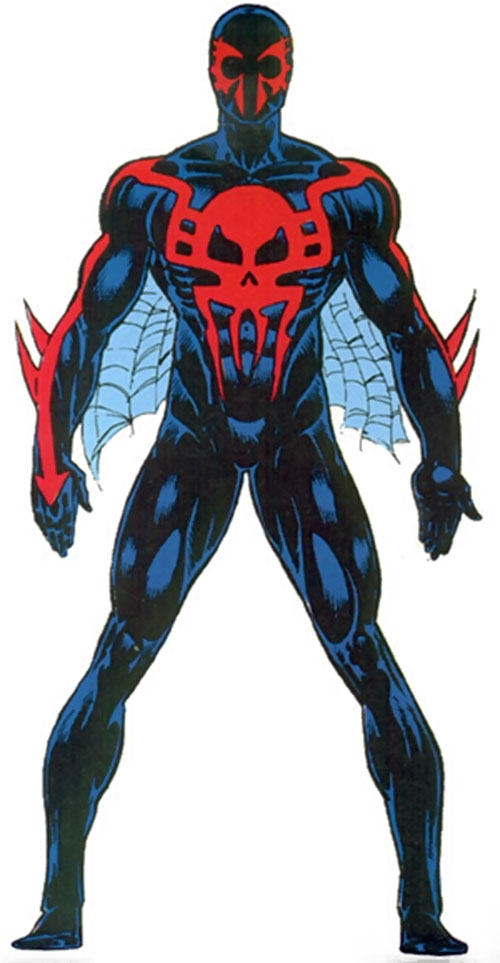 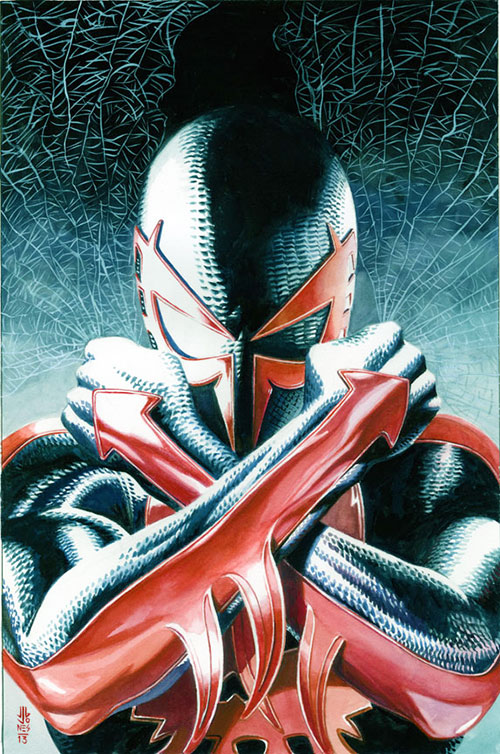 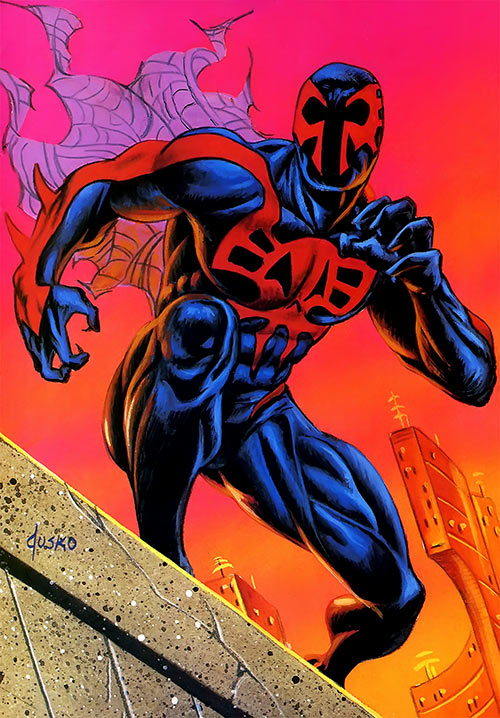