Spider-man has the equivalent strength and agility of a man-sized spider. He can cling to walls and sense danger with his “Spidey Sense” – an instinct which causes his body to tingle [especially around the head and face area] whenever danger is near.

Spider-man is an A+ chemistry student and has developed his own web fluid for his trusty web-shooters. These are finger activated web shooters, worn on his wrists, and concealed by his costume. Peter taught himself how to sew from books and sewed his own costume.

What Spider-Man can pull off with his web-slingers is amazing. He can use them as swinglines, and even constructs from the web as soft as a ball of yarn for Ms. Lion to play with or as hard as replacement iron bars to cage a woolly mammoth. All web constructs may have a BODY from 00 APs up to the full AP level of Snare.

Dr. Doom had a Sonic Beam device on his gauntlet, Spidey webbed the gauntlet and the sound was silenced. He’s also made a make-shift parachute from his webs (Gliding). The webbing has also been used to create a giant sling-shot.

Peter and his friends are always strapped for cash, so fans weren’t sure how they could afford the high-tech equipment they have in their apartment. It is revealed in the episode The origin of the Spider-Friends that after saving Tony Stark’s life he insisted on paying them back. So, he outfitted their apartment with some of the best equipment Stark Industries could make for them.

A common consequence of the team living with Aunt May is that they must continually do their work as crime-fighters without giving away their secret. 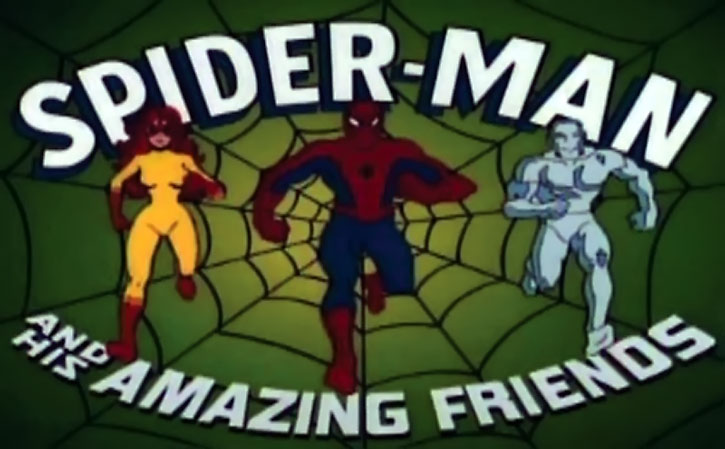 Peter has access to the university’s science labs and has permission to work with experimental equipment after hours without supervision.

Spider-man often removes his shoes when wall-crawling, so it seems that cannot have a thick barrier between him and the surface he is climbing. Shoes are too thick but socks and gloves are fine. Peter removes his shoes in the episodes Swarm, Knights and Demons and Spider-man unmasked.

However in the Video-man episode he ignores this, as in Along came Spidey and The origin of the Spider-Friends – and in Prison Plot he climbs in a lead lined suit with large soled boots. So, it seems to be a preference.

Peter Parker, a clumsy child, was raised by his aunt May and uncle Ben Parker. Both loved him and treated him as if he was their own son. Although happy at home his school life did not always run as smoothly. Peter, a hardworking and intelligent young man, was bullied throughout high school, usually by the arrogant and self centered “Flash” Thompson. 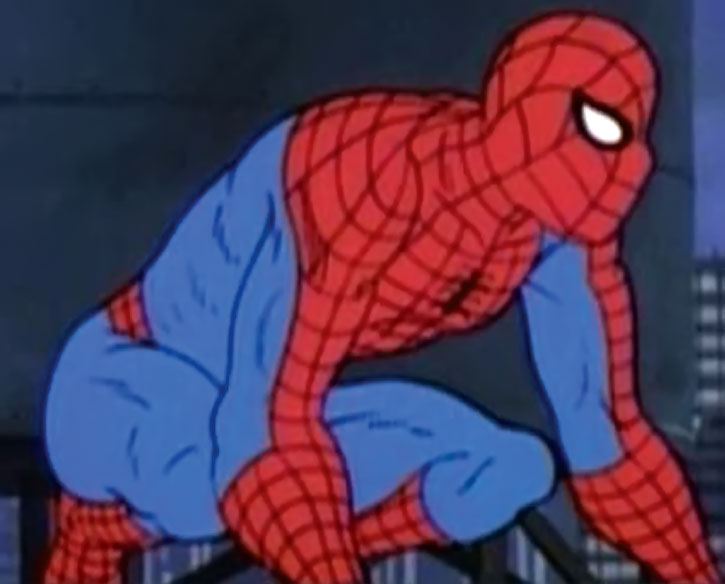 During his mid-teens Peter attended the exhibition of a new particle accelerator. Unexpectedly, a common house spider crawled in to the path of the beam. The irradiated arachnid bit Peter’s hand, transforming his body chemistry and giving him his amazing abilities.

Whatever a spider can

Seeing those as a wonderful opportunity to gain both money and recognition, Peter enlisted in a wrestling ring against Crusher Hogan for a prize of $100. After that, he designed his web-shooters and costume, and set out to become a show business superstar. ”Spider-Man’s” career began to take off, making Peter egotistical and self centered.

Then something happened that seemed insignificant at the time. On his way to a television appearance, a thief ran by Spider-man escaping to an elevator, the police officer yelled for Spidey to stop the thief. Spider-man stepped to the side telling the cop, “That’s your job.”

Not long after that, Peter’s uncle Ben was killed when he surprised a burglar in his house. Spider-man confronted the burglar in an old warehouse and found it to be the same thief. Devastated by guilt, Peter gave up the lime light and devoted himself to fighting crime.

To help pay his way and financially aid his aunt May, Peter works part time as a photographer for the Daily Bugle. Not surprisingly his specialty is taking shots of Spider-Man in action – a feat he accomplishes with his trusty automatic camera. He then sells the photos to his irascible boss J. Jonah Jameson, who detests Spidey. 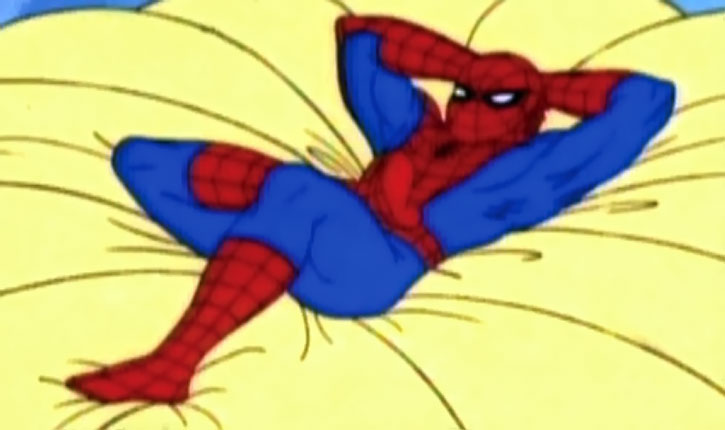 As is the case with most super heroes, only a chosen few know of his secret identity. Peter first met Angelica Jones at an inventors convention. Smitten by her good looks, he was both shocked and delighted to subsequently discover that she was in fact Firestar.

Peter deduced that her friend Bobby Drake must therefore be Iceman. He confronted the two heroes and revealed to them his own secret identity. Hence, The Spider-Friends were born !

Spider-man’s classic costume: full-body red and blue tights; red gloves, boots, and mask with black webbing; black spider on his chest and a larger red spider on his back.

In his secret identity Peter will pretend to be un-athletic. He will allow people like Flash Thompson to outdo him in physical contest and will even endure his ribbing afterwards. Spider-man doesn’t look overly muscular, which is surprising to larger opponents who try to man-handle him. 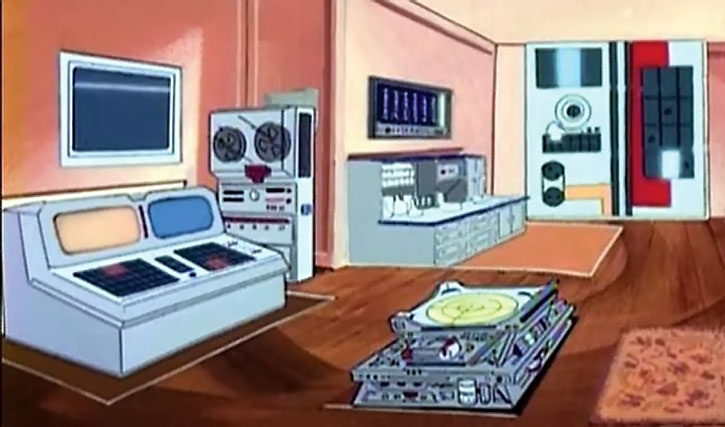 Peter does date one girl from his college, Mona Osborn. But his true love is Angelica Jones though he won’t reveal his feelings to her. When he met Ariel, a girl from the future, Peter immediately fell for her. He was ready to leave everything and go to the future with her.

Originally, Peter takes his role as a super-hero out of guilt over the death of his uncle. This is not a crushing guilt that makes him melancholy though. Spider-man over comes his guilt simply by doing what he does. Being Spider-Man gives Peter’s life meaning.

Spider-Man was overjoyed to meet other heroes in Firestar and Iceman. All three friends seem to enjoy calling each other by names other than their actual hero names, like “Web-head” or “Bug-man”. 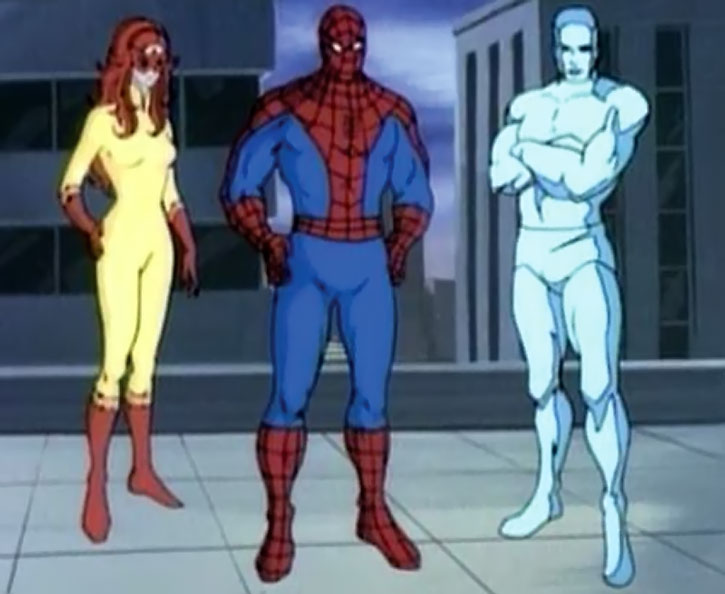 When working alongside his team Spidey usually holds his initiative letting Firestar and Iceman take the lead, then he swings in to rescue them if they should fail.

Green Goblin: “You again ?!”
Spider-man: “I can always count on you for snappy dialogue.”

Spider-man: “Spider friends !”
Spider-man, Iceman, and Firestar: “Go for it !”

“So, look out Electro wherever you are, Spider-man’s coming.” 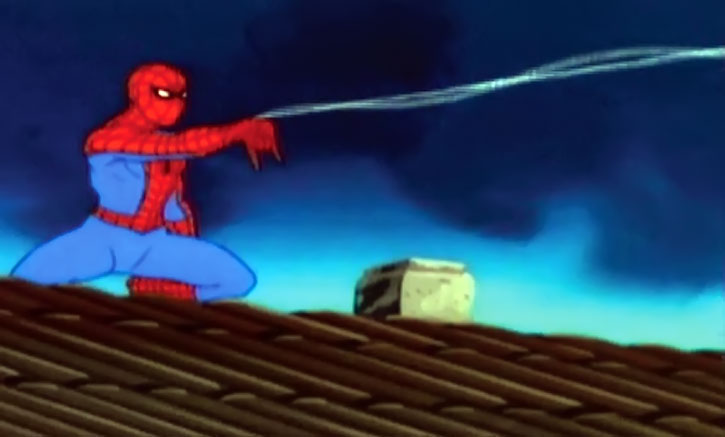 “Why does that guy make my spidey-sense tingle ?”

Iceman: “What are we doing in the infirmary ? I know you’re heart-sick about Angelica, but…”
Spider-man: “That’s truer than you think.”
Iceman: “You really like her lot, dont‘cha ?”
Spider-Man: “Uh-huh.”
Iceman: “So do I but fire and ice don’t exactly mix. Why don’t you tell her ?”
Spider-Man: “If she said no. Bye, bye Spider-Friends.”

(Spider-Man on a swingline catches Iceman saving him from a fall) “Never fear, Spider-Man is here… and freezing to death !”

(Spider-Man on a swingline catches Firestar saving her from a fall) “You know I could make a career of this and love every minute of it.”

Spider-Man: “Well guys, I guess this is one time the bad guy gets away, right ?”
Spider-Man, Iceman, and Firestar: “Wrong !”

Iceman: “Put out the light, he’ll see us.”
Spider-Man: “This is no light, you nincompoop, this is my Spidey-sense and he’s already seen us.”

This version of Spider-man lives in a New York City that is nearly vacant of citizens. Stan Lee  runs a pet shop in the city and Marvel Comics Headquarters is a familiar backdrop. Adamantium   is easily obtained by super-villains, S.H.I.E.L.D., and the NYPD.

A 766 points Character (without equipment)

This version of Spider-Man sometimes gets surprised by traps and villains, so I had to do something creative with his Spider Sense.

Source of Character: The 1981 animated series Spider-man and his Amazing Friends, voiced by Dan Gilvezan. 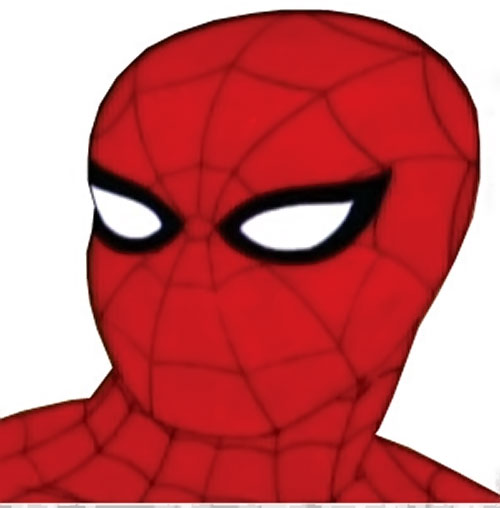 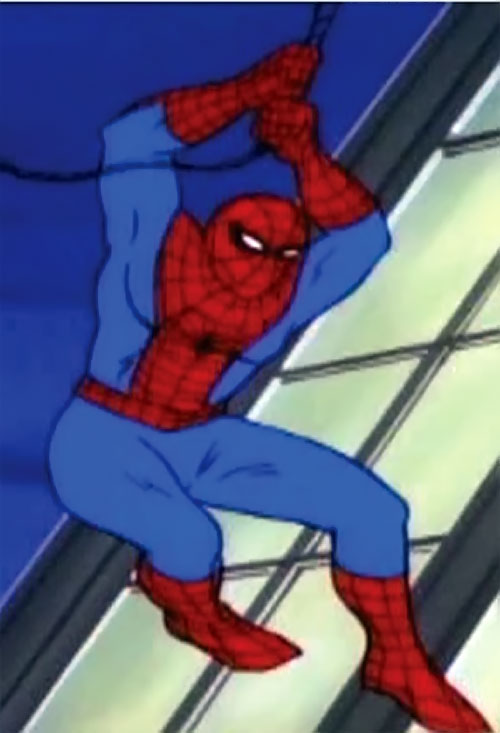 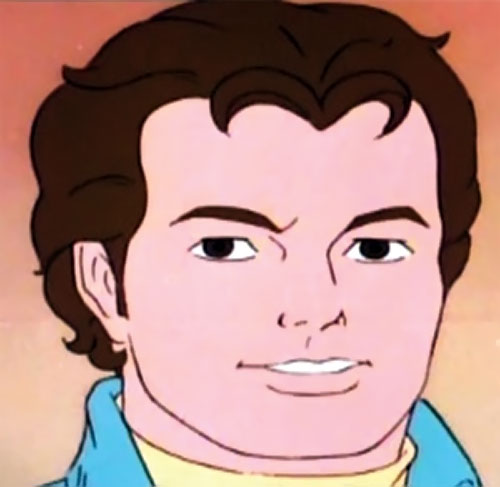 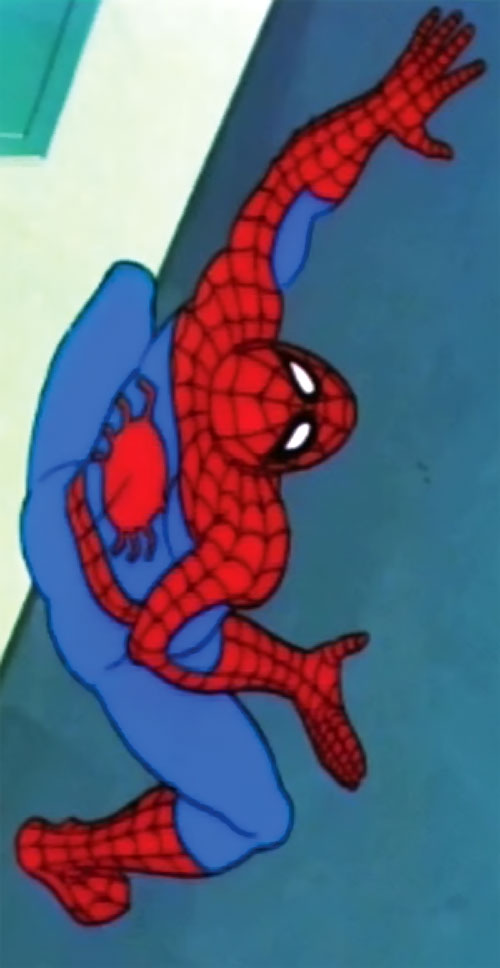 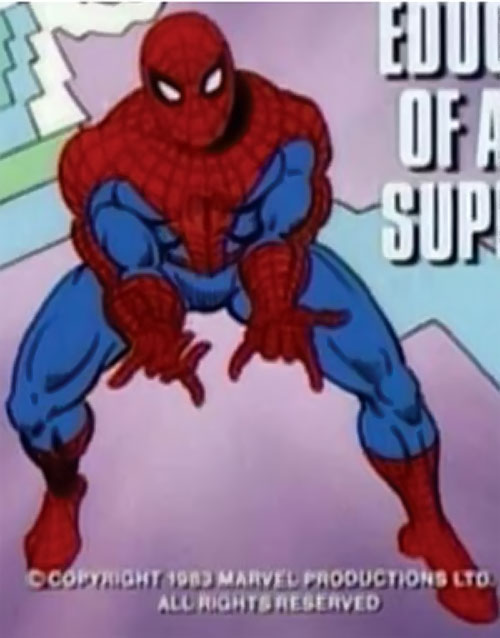 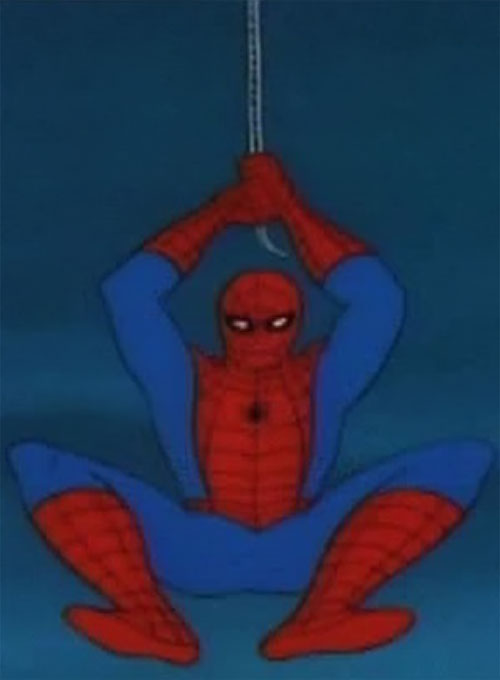 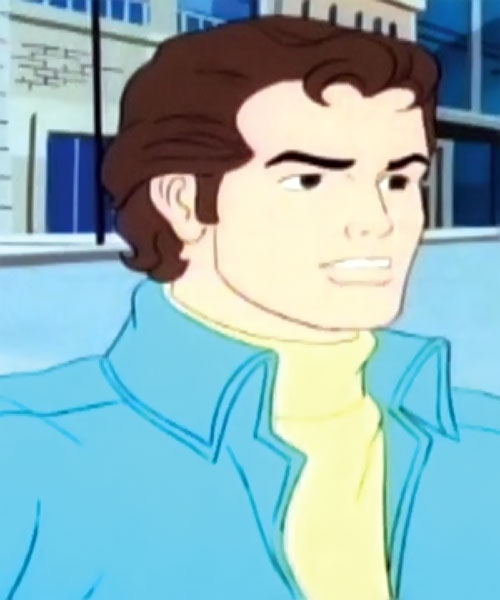 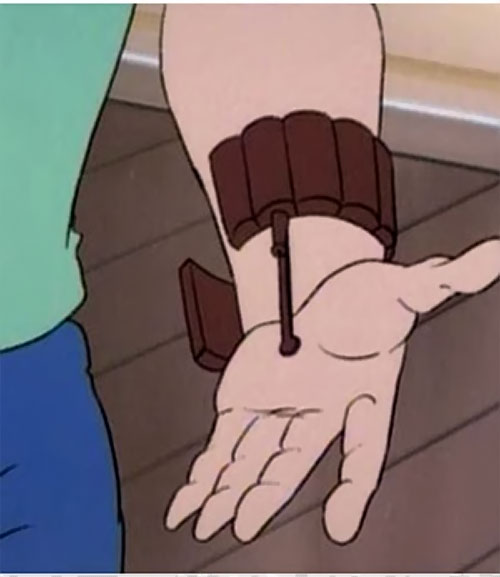 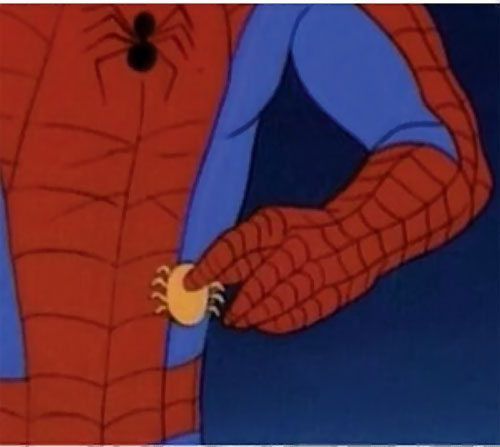 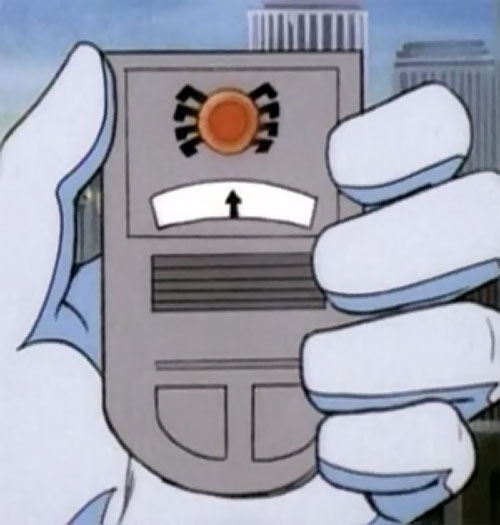 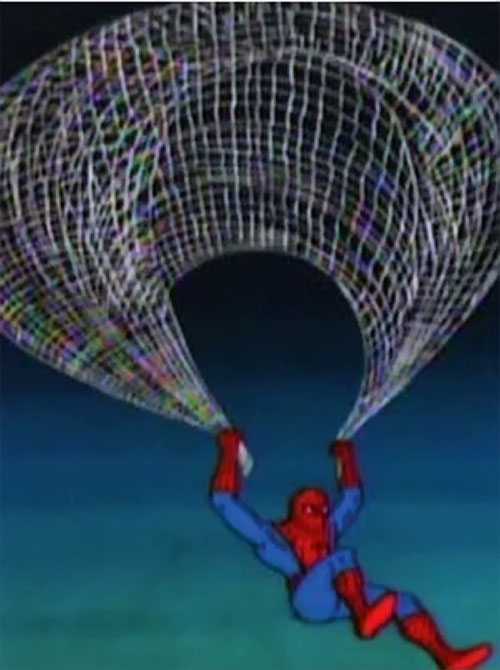